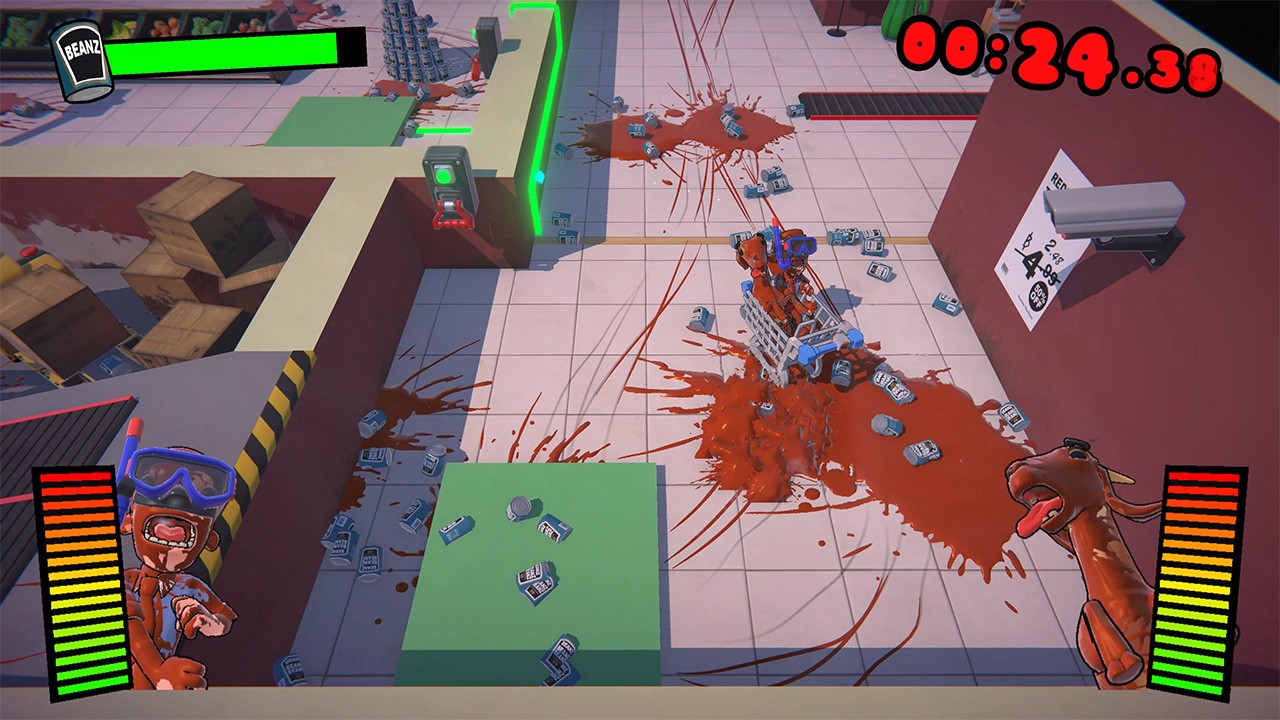 No doubt that there’s some obscure shopping title out there where you play a hapless shopper pushing a trolley around ensuring you fulfil your list, are on a budget then leave the premises before everyone has already fallen asleep. No doubt there are some decent simulators out there too, but what we all want to do is to relive our youth, by jumping in a trolley and being pushed down the aisles, knocking over tins of beans without any consequences. Maybe that’s just me, but if that floats your boat, you can do the same in Supermarket Shriek without having to pick up the beans, but you have to trolley pool’ and share with a goat.

It’s a fair assumption that you or the goat would push. Instead, you’re both trapped in the trolley and have to work as a team to get around a series of obstacles. They’ve been conveniently built in the shops or grab some items in the fastest time possible. And to recall the momentum, there’s no pushing, you scream your way through. With ZL, the man screams, steering you to the left, with ZR it’s the goat to the right. If you hold the buttons together, you go in a straight line. It all sounds so simple, and when explaining it, yes, it is, but it’s super tricky to rely on the screams so you can fine tune your direction with the left analogue stick. 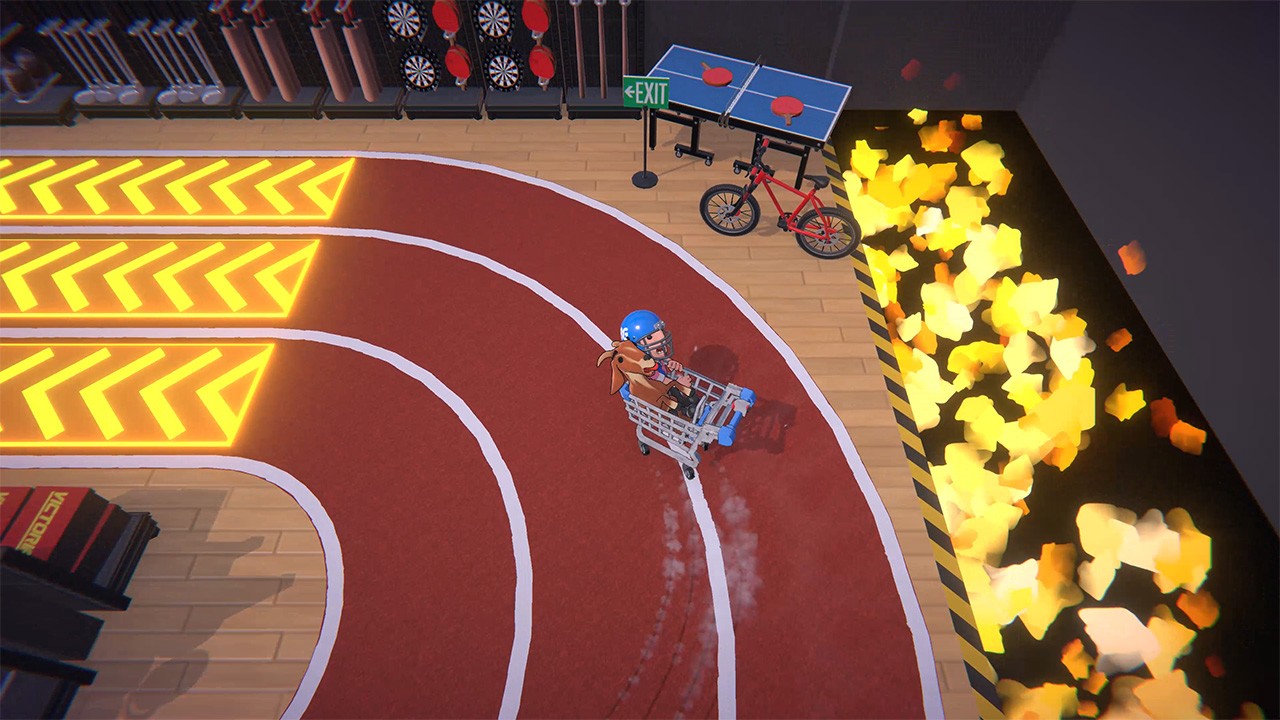 The first couple of courses are relatively easy, but it’s just a tease of what’s to come as the difficulty soon ramps up. These challenges aren’t tricky in themselves, but the most challenging part is doing it in a fast enough time to unlock more stars, bragging rights and customisations. As if the steering wasn’t tricky enough, you have to dodge swinging pendulums of death, navigate narrow bridges and avoid any sort of crash whatsoever or you have to restart the track. That’s good for perfectionists as you can perfect your run. Still, as the game progresses, the courses get overly complicated where timing is everything as you have to wait for an obstacle to move, or hit a switch and get over a jump before the switch goes back to its default.

Supermarket Shriek is a fun idea and having the characters scream to propel them along is amusing at first, but gradually gets irritating as they’re the same voices, plus it doesn’t matter how good they sounded, they’d wear you down. You can’t trust yourself with this game due to the co-ordination and patience required, but if you want to test yourself, and your patience levels, you can opt for a co-op session where one player controls the man, the other with the goat. Why you would do this, I don’t know. It’s nice to have the option, but you’re bound to be paired up with someone who thinks it’s hilarious to turn when you’re on a straight, falling into a pool below or being zapped by a laser. But, that’s all down to preference and the strength of your friendship.

For me, it was a solo affair, and I mostly enjoyed Supermarket Shriek is short bursts as it gets quite frustrating. The incentive, other than getting a high score, is to unlock items for your characters, which is only cosmetic but provides enough drive to see what you’ll unlock next. There’s a lot to win, and it seems you can earn new items and stages pretty quickly – notably, if you win all three stars per level. Initially, I tried to get the best scores. Still, after the continued frustration of last-minute mistakes or bizarre collisions where I would end up on another supposedly unplayable platform, I aimed to get as many stars to win the goodies. 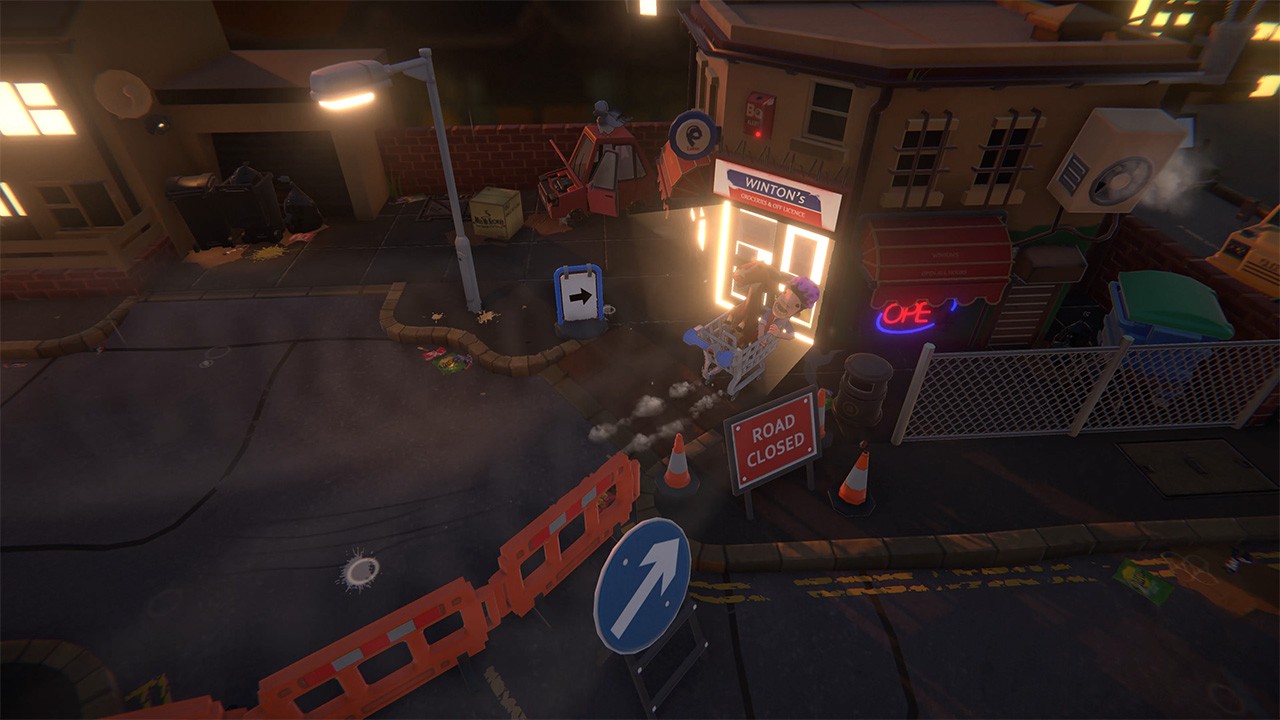 When it comes to presentation, the top-down view is very nice. Supermarkets aren’t the most exciting places, but when you see spinning blades and lasers, plus a full-scale swimming pool in what is essentially a corner shop, it’s pretty amusing. The character models are good too, as is the general feel of the game – ignoring the frustrating fails, of course. We’ve already touched upon the irritating screams. They aren’t bad, it’s just that you’ll hear them all the time and it gets a little repetitive. As for the soundtrack, while you aren’t here for new music, it’s catchy, uplifting and enjoyable to play too.

Supermarket Shriek is a pick-up and play game where you can jump into a level instantly and spend 10 minutes to an hour at a time. Any more than that, and it’ll test your patience levels once more. Perhaps you’ll get a kick out of the co-op mode, and it’s nice to have it there, but didn’t appeal to me. It’s almost like trying to set a decent ghost time on Gran Turismo with one person controlling the accelerator, the other on the brakes. It might be fun as a gimmick, but the goal is efficiency, and I don’t see many pairs that can smash the times. For everyone else, it’s a good solo game for a bit of fun, but there’s no story or other features on offer, just the main challenges of obstacle courses, shopping list grabs and my favourite, smashing down tins of beans as fast as possible.

A good commute game or similar if you don’t have much time to commit to a big title, Supermarket Shriek is a fun game in small doses, but the continuous screams and ruthless resets if you crash mean that this is a game of patience.