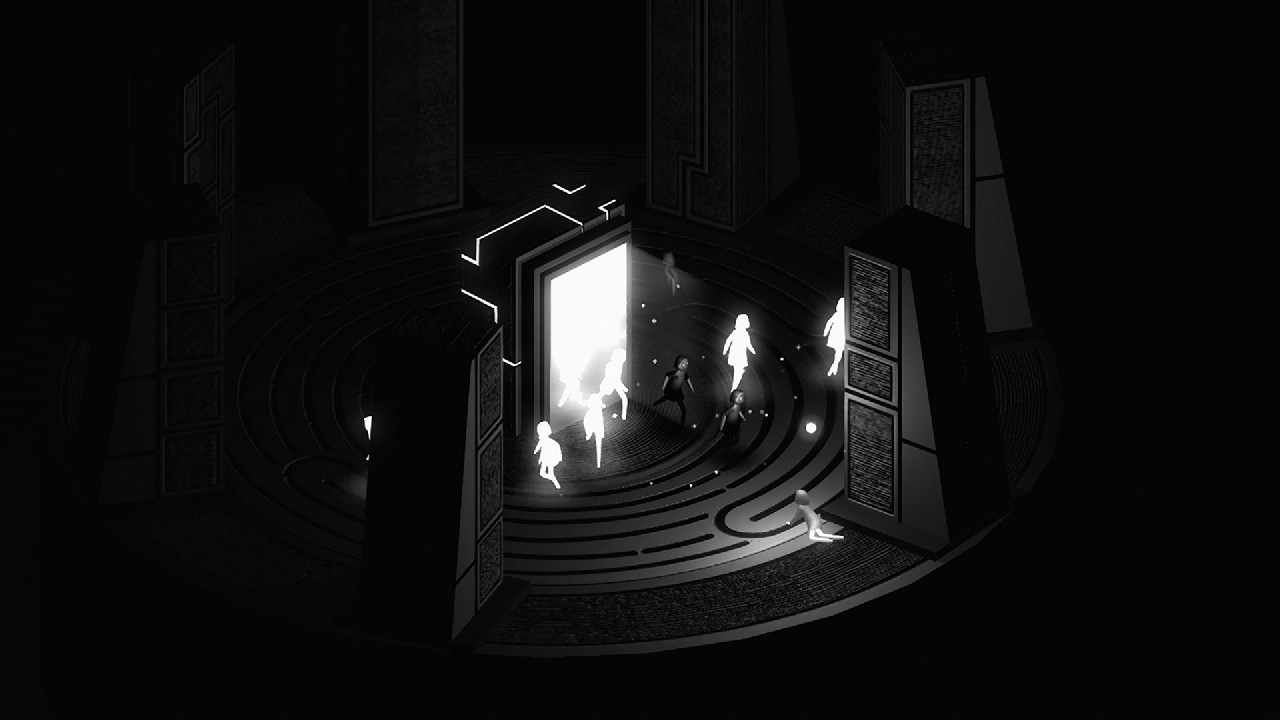 I think sometimes puzzle games end up getting in their own way in an attempt to be interesting or unique. I know that puzzles are one of the oldest forms of intellectual gaming, and we always hope to reinvent the wheel in order to find something interesting or exciting about a concept, even if it’s familiar. In the case of the Quantum Astrophysicists Guild, they’re always looking for a new way to approach things. That’s why we have classic indies puzzlers like The Bridge, which marries a fantastic art style with a convoluted storytelling idea, or Breakpoint, which let players experience some great geometrical mayhem while still having some special approach to the weapons system. Yet, with Fracter, their newest release, it feels like the need to innovate may have shot them in the foot, resulting in an appealing idea that’s marred by execution.

Fracter is a puzzle game that relies on light and shadows. You’re some dude who decided to screw around with a reality splitting mirror and created light being copies of yourself, which are now running wild. The game refers to you as The Seeker, but I refer to him as the Dingbat because we didn’t even need to be in this mess. Anyways, The Seeker has this Navi-style light that follows him around as he now has to go into several doors that were activated in his attempts to screw around with the mirror, and he needs to recapture all of the light beings that he generated. Oh, and now there are also beings of pure shadow that will murder the shit out of you, so have fun with that.

With Fracter, you’ve got a 3rd person romp through a slightly isometric, fixed camera world where you’ll zoom in and out on yourself with no control whatsoever as you navigate light puzzles to get back the energy clones and set things right. You move with the left joystick and control the Navi light with the right, and things are very unbalanced here. The Navi light can turn on and off certain beacons and doors, and also can spin around some pillars to make light barriers and activate light sensors. Later on, The Seeker also gets the chance to move around pillars and blocks, effectively letting you impose some physical will over this bizarre area that gives you two times the things to worry about, which is not a bad thing. If all of this game was The Seeker hanging out on the sidelines while you manipulated light with the right joystick, it would be an utter bore. Thankfully, you’ve got a whole different thing to worry about with the darkness doppelgangers. 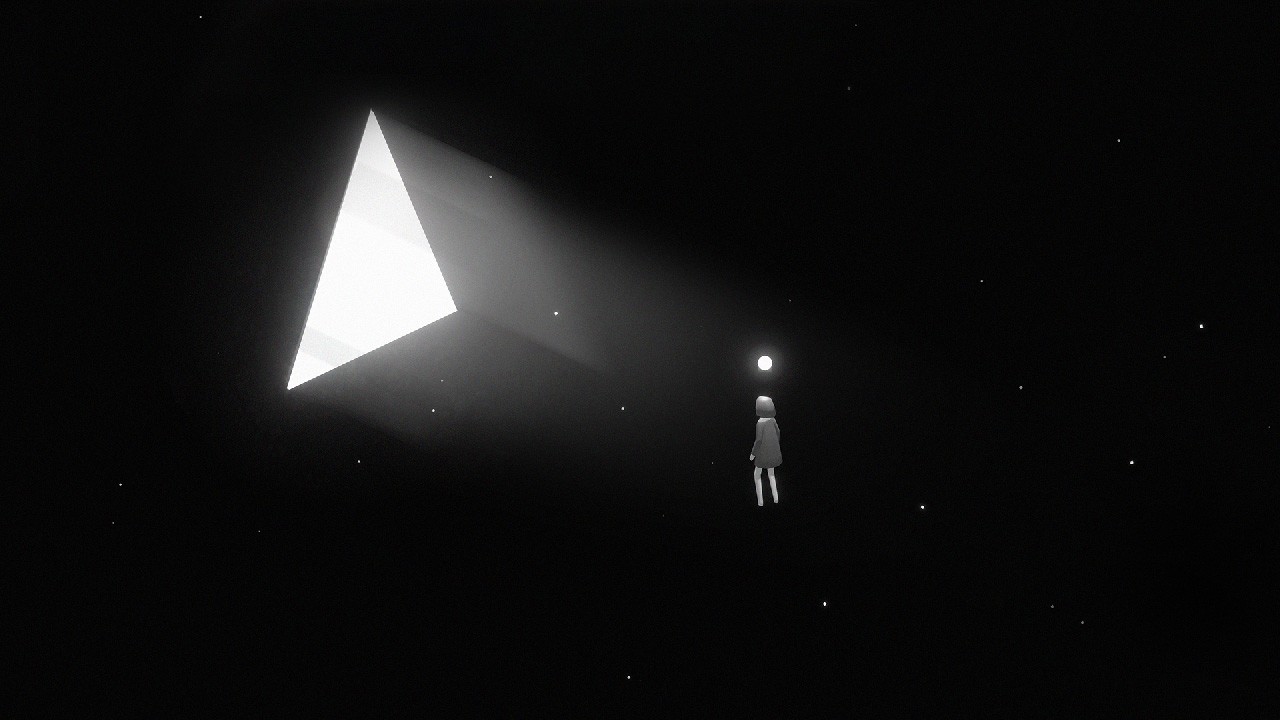 Fracter has some of the most tenacious and evil AI that I’ve ever seen in what should be a fairly innocuous game. These beings actually seem to have very acute hearing and senses, and being foolish enough to try and run past certain areas will meet you with the biggest ass whipping of your life. These shambling creatures, which initially move and behave like zombies from a John Carpenter movie, need only to be vaguely aware of you before dropping to all fours and hurtling at you like Alex Garland gave them notes on how to improve their scariness. When they’re trudging along, the dark monsters follow set patterns, slowly weaving in pathways in small areas like some 8-bit red shelled Koopa Troopa. The second they inhale your delicious light scent, all bets are off. They run around corners. They’ll chase you down stairs. I had a zombie follow me through a doorway and take over my soul in a room that wasn’t even part of the level he came from. It’s madness, and the only way to survive being chased is to trick them into running into a light wall or, possibly, putting a ton of distance between them and you to the point where they give up. Which is hard, because they definitely move faster than you, so you need to have the drop and then have a clear, complex path on which to lose them.

While Fracter is, by no means, a long game, it had a lot of ups and downs throughout my time playing. On the one hand, the puzzles were well executed enough. Sometimes I ended up scratching my head on how to best balance out the light and the timing for when to move things or be in certain places, but nothing was so impossibly hard that the game ground to a halt. By having players contend with entities of malevolence while also working out the geometry, Fracter crafts a nice double brain approach, stimulating both lobes at once. The game furthers this along with good atmospheric influence, keeping the music dreamy and ghostly until the dramatic drums indicate that the darkness has noticed you and is giving chase. It’s great in that regard.

The game doesn’t handle as well as I’d like it to, however. Fracter’s protagonist seems to have a bit of an issue with his movements, and I think the camera angles are partially to blame. With an off kilter isometric view, players can easily misjudge where certain lines are, or where the stairs end and the platforms begin. This further bleeds into light issues, particularly when in handheld mode. The game looks great on the big screen, though the simplistic ideas of light and dark sometimes need atmospheric influence (i.e. closing the curtains) to best give the full effect, not to mention cut down on missing vantages. In handheld, though, the Switch Lite loses a lot of the non-centred details, which can result in players not seeing otherwise obvious pathways to where they need to go to find the light clones, or where they can seek safety from the dark drones. 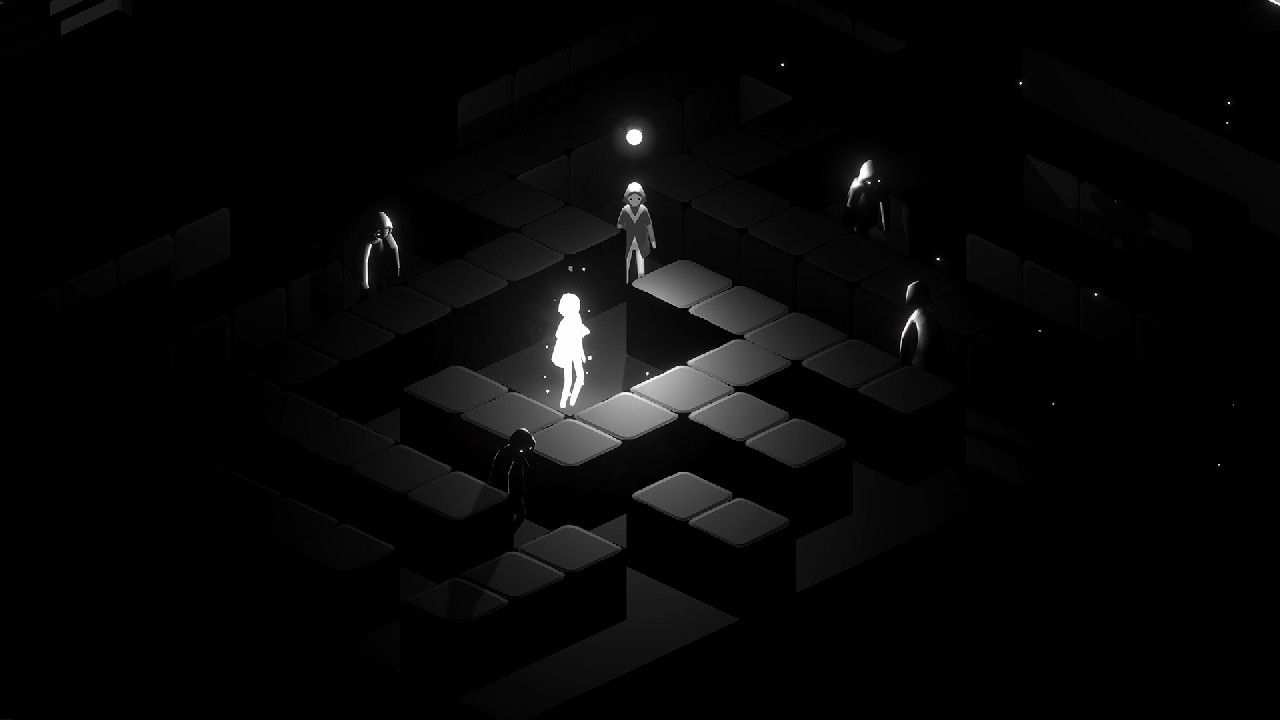 Additionally, I was a bit surprised that there’s no touch screen support. As Fracter launched on iOS and Android at roughly the same time, I thought that there would be some variation of touchscreen support so players could move with the joystick and have the option of either twinstick puzzling OR toggling things with the flick of a finger. Instead, you are forced to use the right joystick as a mouse cursor of sorts, and I think we’ve all had some hit or miss moments with that. There’s a sequence early on where you need to flick the light between two pillars, timing it right to either trap or vanquish the two zombies blocking the doorways. Doing it with the joystick resulted in me being a bit off on timing and getting soul-sucked multiple times before finally getting it right. Thankfully, respawning after “death” only takes a moment and puts you right next to the puzzle, but I don’t like needing to redo things over and over when it should only take a moment. I feel like being able to time it well and just tap with my finger would have had better results.

Fracter is a short but interesting jaunt of a game. I wasn’t really captivated by the “story,” nor the attempts to amplify the artistic ideal with random poetic verses interspersed in order to add direction and mystique, but they aren’t terrible. I wasn’t thrilled with the controls and the darkness can sometimes obfuscate the way ahead, but it’s also not impossible and the game never crashed once. In short, it’s good: it’s not great, but it’s worth the price and your time. If you’re into atmospheric puzzle games with a bit of tension but not horror, then Fracter could be a fine time for the right player.

Fracter reminds us all that many, many adventures wouldn’t need to happen if people learned to not touch what they shouldn’t touch.