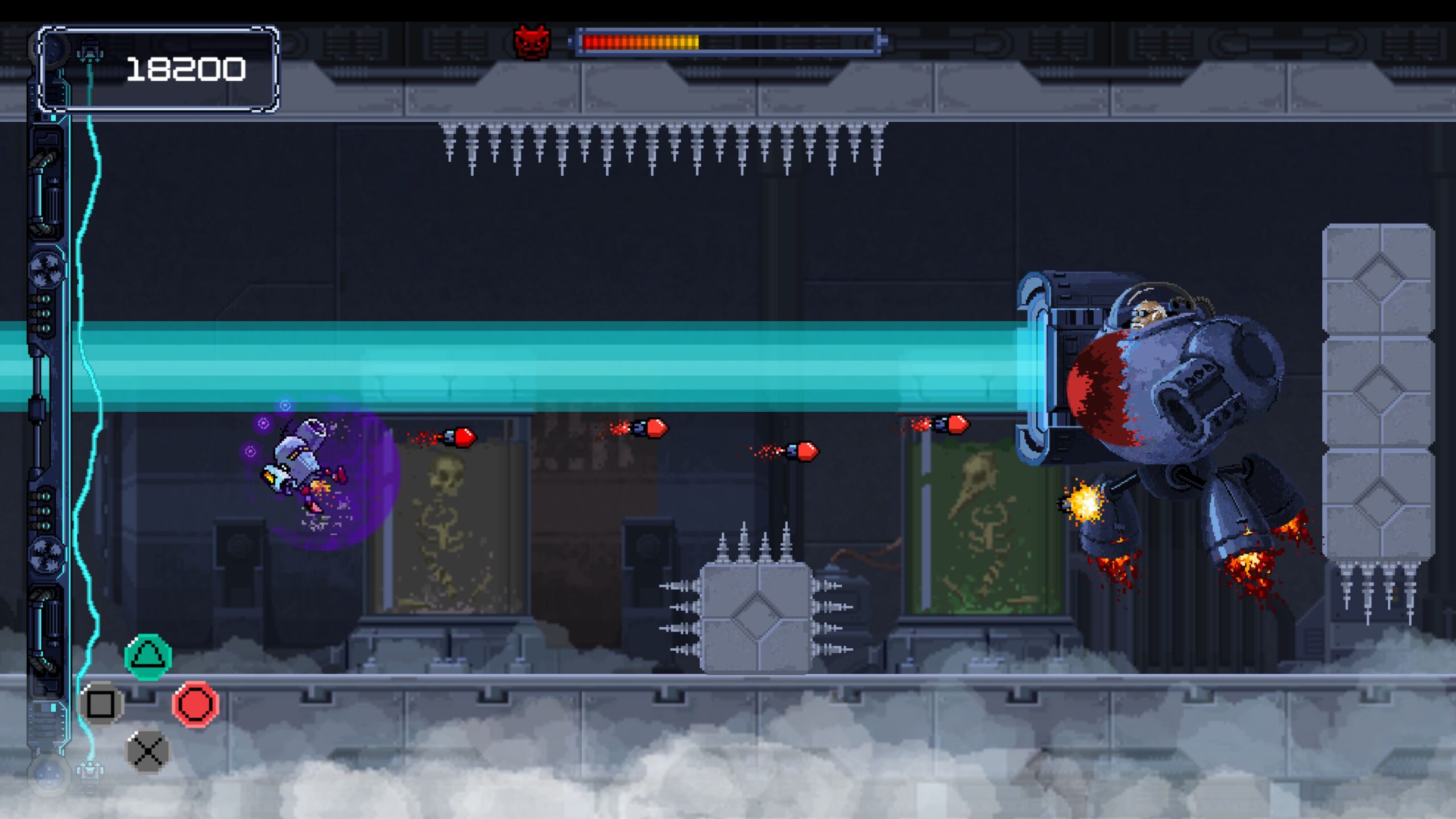 PixelBOT EXTREME is a game about breathing one huge sigh of relief, whether it be in short, sharp breaths or the longer exhales that punctuate the end of the level. Moving quickly and reacting to the immediate environment is the key to winning in each of the levels if you are going to pass through to the end. You can only move up and down, and you can duck under obstacles as well if you can’t shoot them. This is because PixelBOT follows a colour-coded mechanic where you can shoot enemies and the environment as long as you have the correct coloured missiles. At the beginning of the game your choice is limited, but as time goes on, this increases to include all the colours on the PS4 buttons. 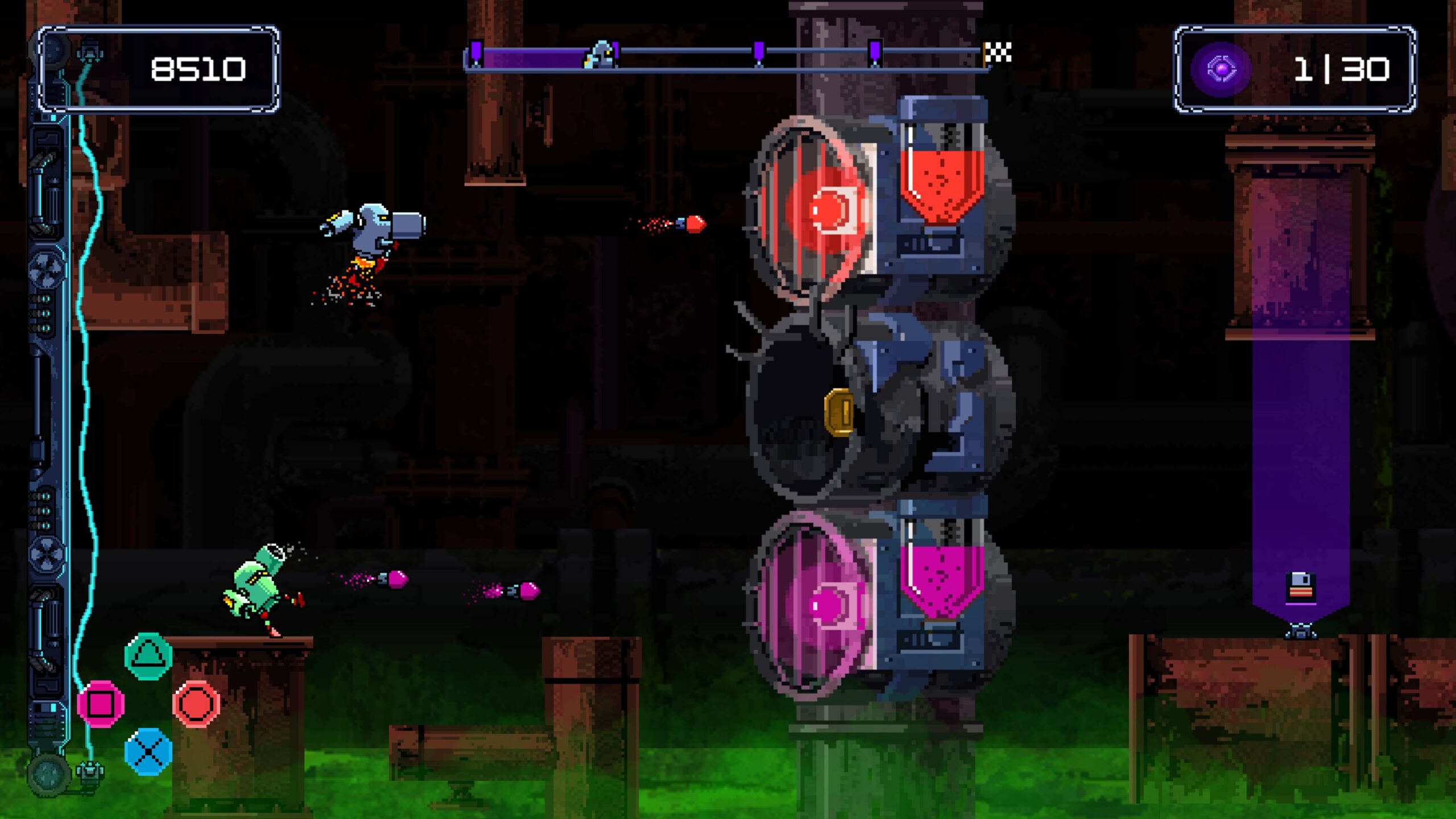 You collect bits as you traverse through the levels, and this is vital if you want to progress to later levels, as they are gated and require you to collect a certain amount in order to unlock. So occasionally you must play completed levels again in order to collect the necessary amount. After you’ve played a certain number of levels, then you’ll face a boss that normally uses the colour mechanic as a way to defeat them. Some level uses the colour mechanic for barriers in the game as well as for enemies and so you often need to adapt very quickly to what is happening on the level. There’s an option for two player fun and increased difficulty as you go and it increases the longevity of PixelBOT as you go.

PixelBOT is a mixture of a puzzle game and a reaction game you’ll often find at home on a mobile phone, and I’ll be honest in saying that I do not understand how I feel about it. Reaction games require you to get to the point where you almost reach a Zen state of dealing with the obstacles that you face, and you generally only have to deal with one problem at a time. PixelBOT is often throwing enemies you can kill, enemies you can’t, obstacles you can destroy and obstacles you can’t, items you need to collect and spikes you need to avoid, and there really is so much going on, that you’ll often just be glad you got through the level at all. 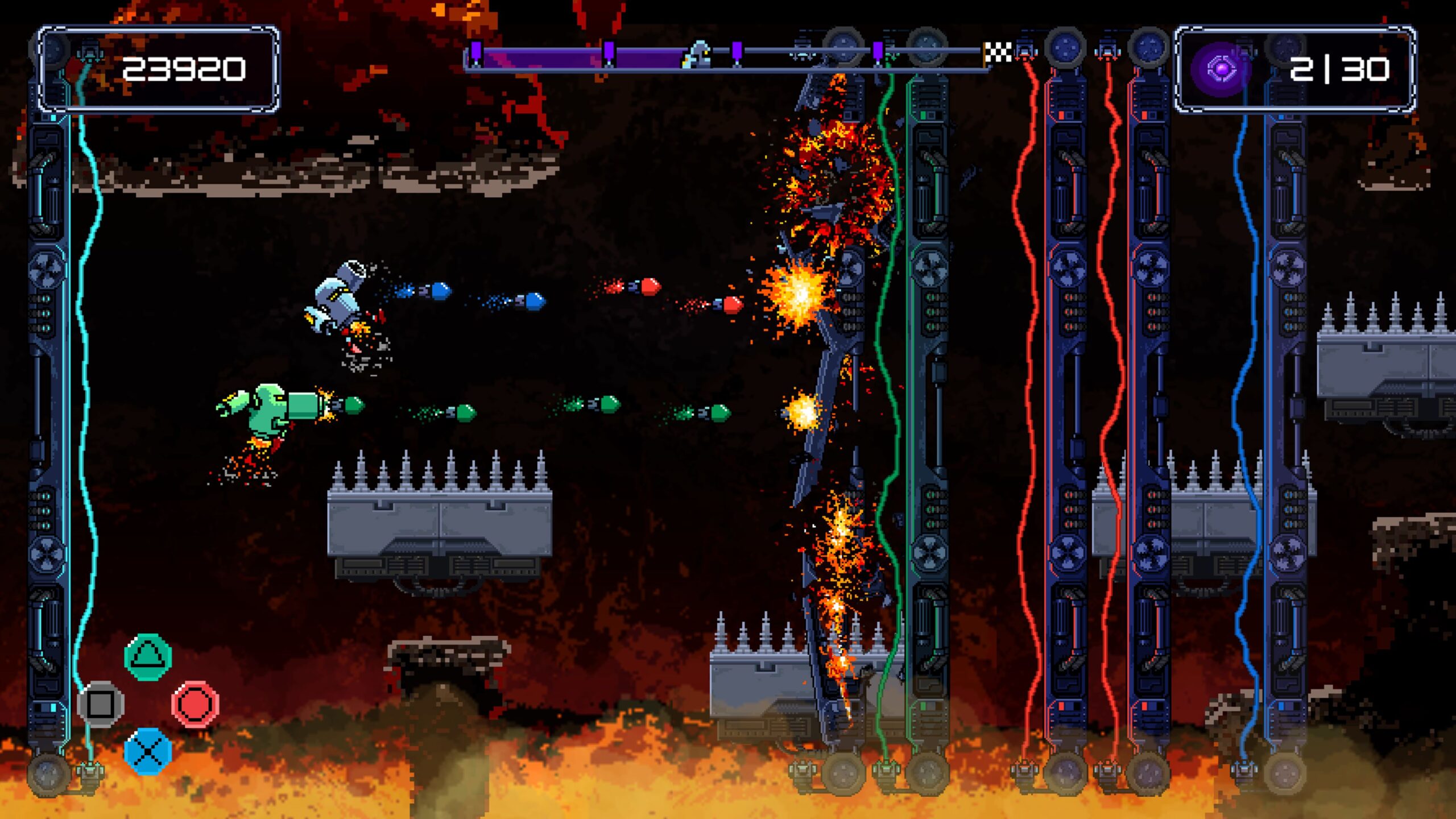 You never really feel that you have mastered a level, like you would in a normal shoot-’em-up, as the pace is often far too quick for you to be able to reach some kind of natural rhythm and due to the production values, most of the levels don’t have any obvious markers to allow you to remember where you are in the level. So you’ll end up dying a lot in the game, but there are options so that death is never really a punishing thing, but a minor annoyance, and often sometimes, you’ll just keep on dying through a level until you get through to the end.

It’s trying to balance the fine line between frustration and being addictive, and with so much going on, I’m not 100% convinced it achieves that fine line. That being said, a lot of thought that has gone into the mechanics in the first place and the boss battles are tough and innovative in terms of how they use the colour coding. So if you go in and maybe give it an hour here and there and want something that really grabs you and doesn’t mollycoddle you, then maybe PixelBOT is the way to go. It’s going to annoy many people with how unforgiving it can be, and for some, they might just want that experience.

A tough and unforgiving game that throws obstacles, traps and enemies at you. Hard to master, and you will be glad that you simply made it to the end.