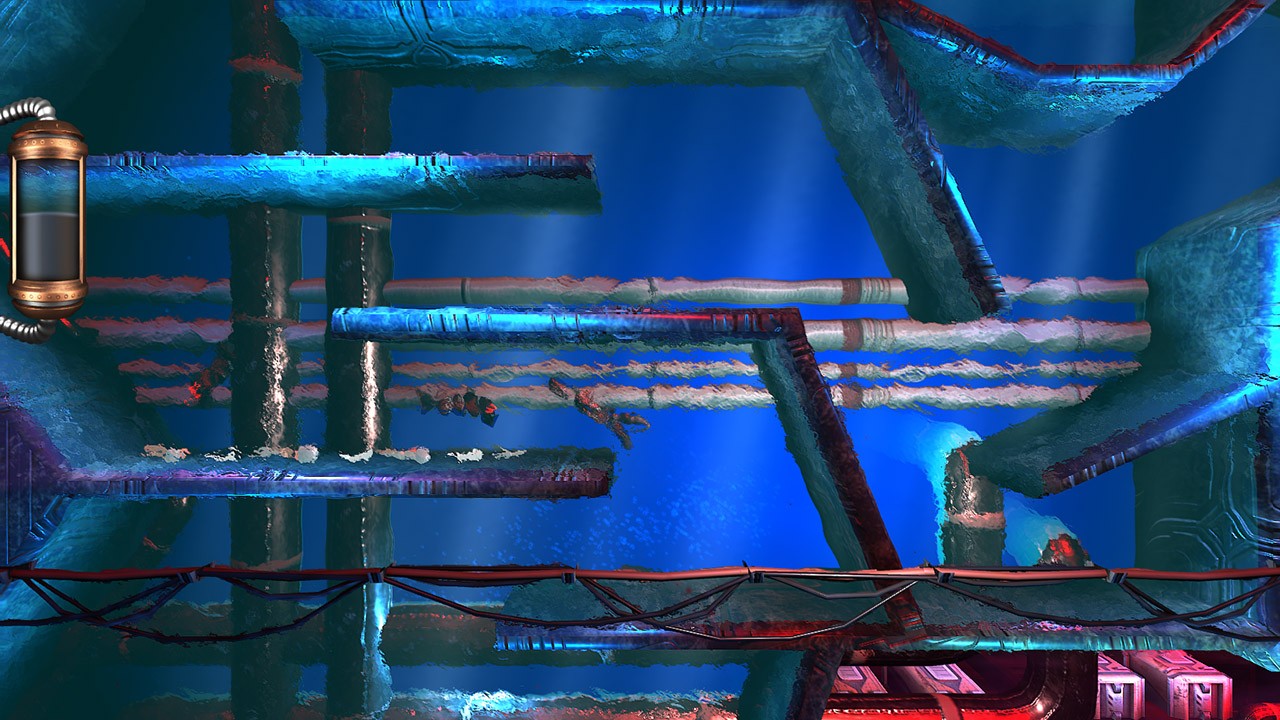 Toolboy is an old-style platformer inspired by several classics of the same genre, and developed by indie studio, Majestic Twelve.

With Toolboy, you’re thrown straight into the action after a brief introduction that’s told through a combination of pictures and text. It isn’t long or tedious and actually provides a nice little glimpse into the lore of the game, with some expositional world-building, and an explanation of the titular character, Toolboy. There’s a bit of technical jargon and some numbers that are apt to scramble the brain, but the general gist of the story is easy enough to get.

Right off the bat, you’ll notice that Toolboy has some beautiful graphics. The environments contain a wonderful amount of detail that makes this mechanical, industrial world utterly convincing. The main colours – reds, yellows and oranges – absolutely pop, and are accented by the odd flash of white, green, or blue.

So far, Toolboy is a great-looking game, and that’s only emphasised by the music. It’s exactly what you’d expect from a game with such a mechanical backdrop, with synths, drums and a range of electronic instruments all coming together to boost the atmosphere. It fits, it’s an interesting soundtrack, and it sounds as if it was made just for Toolboy. 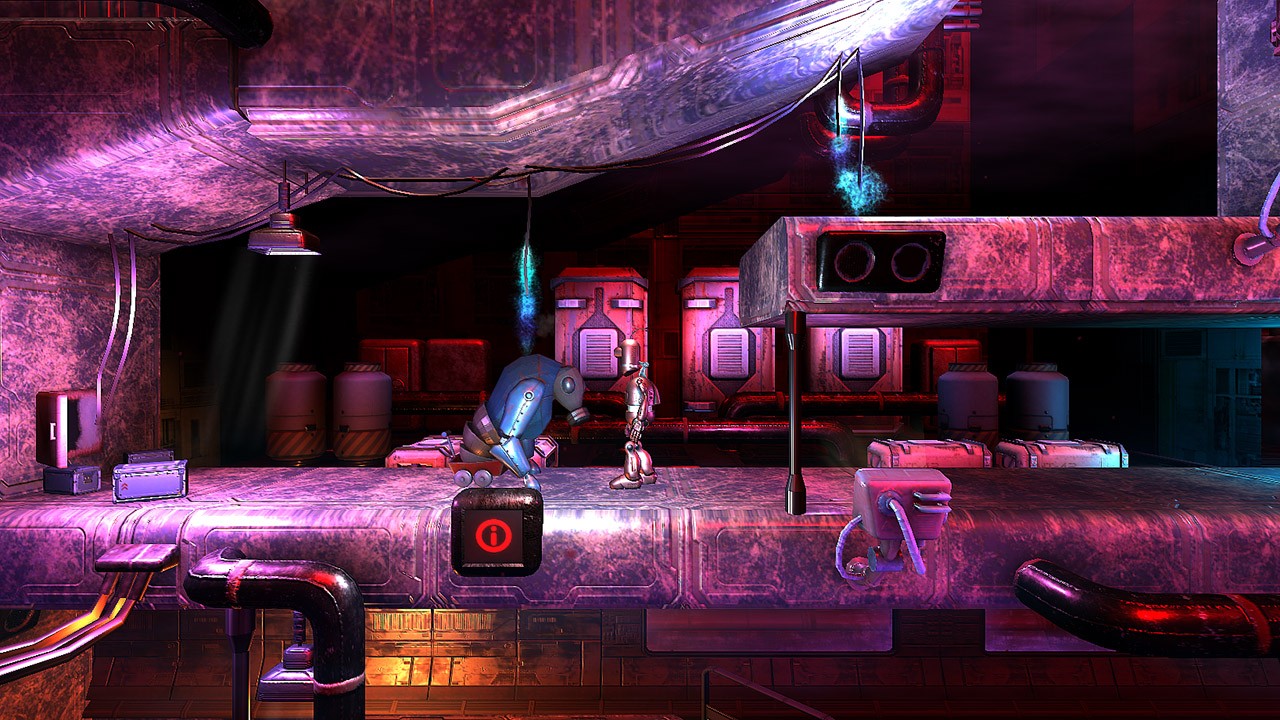 Now we get to the nitty-gritty. The controls are fairly simple – move Toolboy with the analogue stick, jump and use the jet-pack with the A button, crouch and sneak with the B button, and use the L and R buttons to cycle between items. While the controls themselves are easy enough to grasp, however, Toolboy’s handling is more than a little clunky, especially when swimming or doing any kind of precision platforming such as jumping from wall to wall or from one ledge to another. This isn’t to say it makes the game unplayable, but it’s a potentially frustrating setback until you settle into Toolboy’s mechanics.

Once you do settle into it the platforming in Toolboy can be fun, particularly with the double-jump ability that the jet-pack allows. Along the way, you’ll also pick up items that will provide new abilities. The remote control, for example, can be used to manipulate certain pieces of machinery in the environment around you. There are also some mini games, or puzzles, interspersed throughout Toolboy, many of which do offer a genuine challenge.

While Toolboy provides hints at certain junctures within the game, though, the main problem with Toolboy is just how vague it often is. The hints aren’t always explained particularly well, with the technical jargon often jumping in to confuse things further. Thus, the game requires a lot of trial and error to get through, which makes the already-tricky puzzles quite a bit trickier and means a lot of deaths. It’s a good thing the lives are unlimited, though the game does keep a tally of your deaths in the top-right corner. 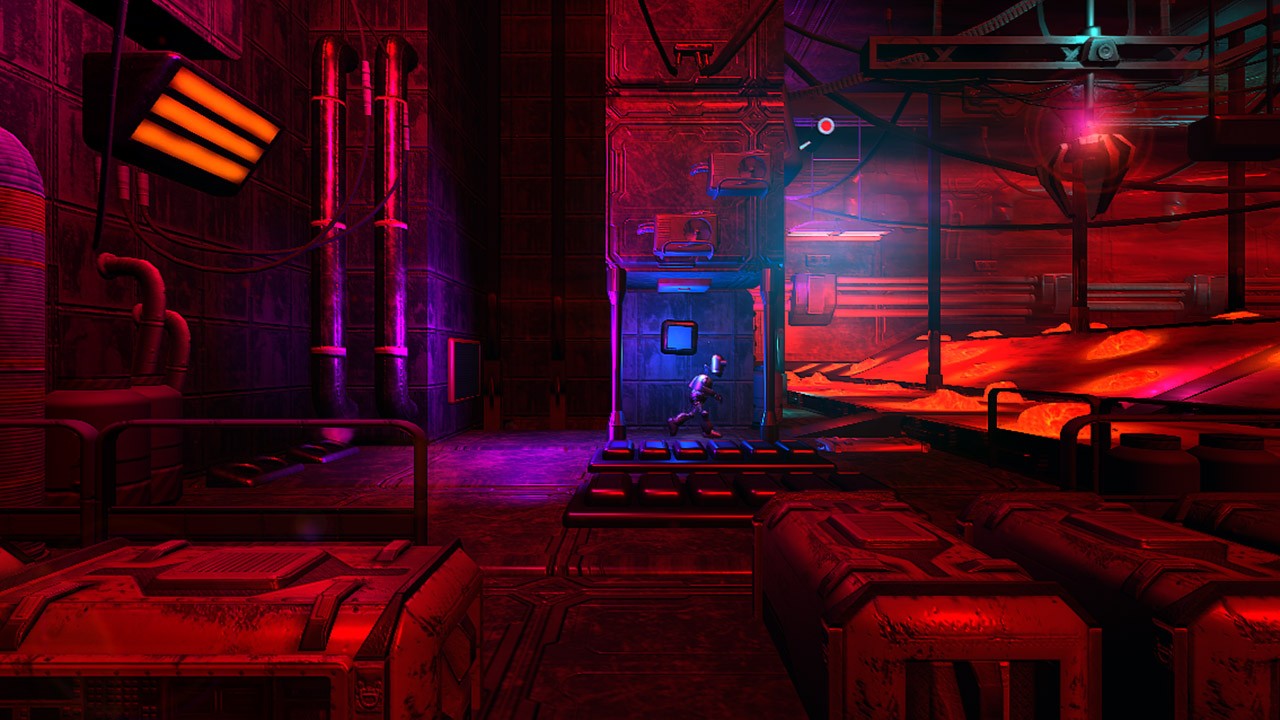 There are also some really interesting minor characters that you meet along the way in Toolboy, all of whom seem to have their own roles and personalities and look great in terms of design. But again, like the hints, the dialogue suffers from too much technical jargon and strange references to in-game lore that are hard to keep up with, if you can keep up at all. The meaning of exactly what’s going on can be easily lost, and thus you’re left unsure of how to proceed.

Toolboy’s frequent and frustrating obscurity coupled with the clunky handling pretty much erases any replay value the game may have had. While it can be interesting on the first play, there isn’t much incentive to go back and do it all over again if the game is a chore to get through, which, for many, it very well would be. Toolboy’s various charms – such as the graphics, and the little animations Toolboy will perform if left waiting – are not enough to save it here.

All in all, Toolboy is a platformer with a lot of potential, but ultimately doesn’t quite hit the mark. You can certainly see the inspiration gained from classics such as Rayman, Crash Bandicoot, the Mario franchise and even Abe’s Oddysee, but, while Toolboy isn’t all bad, there are quite a number of creases that need ironing out.

Toolboy is a platformer with a lot of potential, but ultimately doesn’t quite hit the mark.