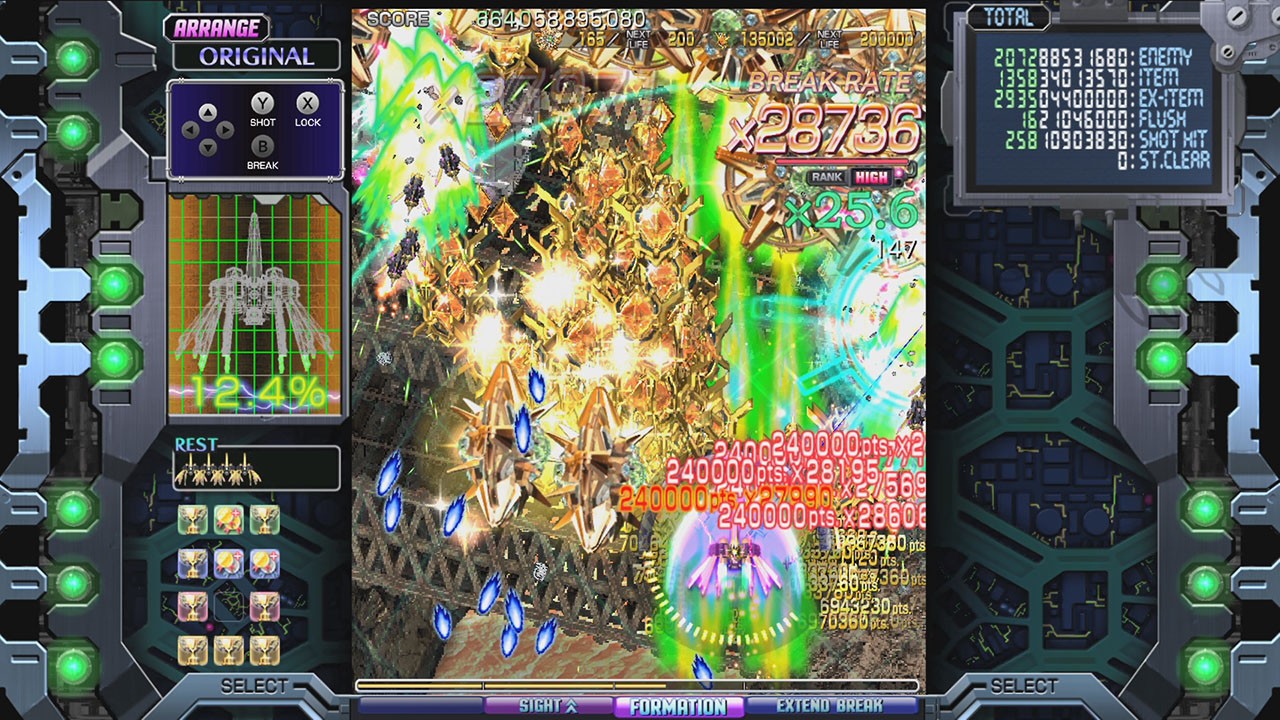 You know what I love about shmups? There is never a storyline that NEEDS to be explained. Oh, for many of them, there is a story, and they can be as complex and operatic as the most dramatic anime, but you never really need them. The dedicated will remember the importance of the different Touhou storylines, or let me know why Mushihimesama has an incredibly fascinating plot, but none of that matters as long as the gameplay is really good. That’s something that I deeply and eternally appreciate for Yotsubane, the developer behind Crimzon Clover, for cutting out. The original, entitled Crimzon Clover: World Ignition, is a title that I sank many hours into when I was still part of the game publishing world. It helped me to compare other indie shmups for what I thought was a great baseline for action and difficulty curve. Now, almost six years later, I’m in the thick of it all over again with a brand new, enhanced version, available worldwide on consoles across the board. This is Crimzon Clover: World EXplosion.

Crimzon Clover: World EXplosion is a vertical shmup that gives you almost no time to understand what’s happening before you’re in the thick of it. You choose your play style, your ship and off you go. From the very first boot, you have your choice of three different ships, each with their own unique attack styling (which we’ll cover in a moment) and also a handful of different game modes. Your initial choices are either Novice or Arcade, with one being the standard gameplay and the other being the “easier” version, and those choices also have different flavours within. With the new EXplosion version, there’s an Arrange mode you can also pick, but we can look more into that shortly. I highly recommend starting with the original “Arcade Normal” version to get going so that you can really get a taste for what Yotsubane brings to the table. After you feel like you’ve gotten a handle on things, you can go back and try things like Boost mode (where the game alters as you play and it’s incredibly difficult) and Unlimited (if you want to get sucked into a world of neverending visual overload). Every time you start a new run, the game will attempt to force a tutorial on you to brief you on the controls, but that’s simple enough to bypass. 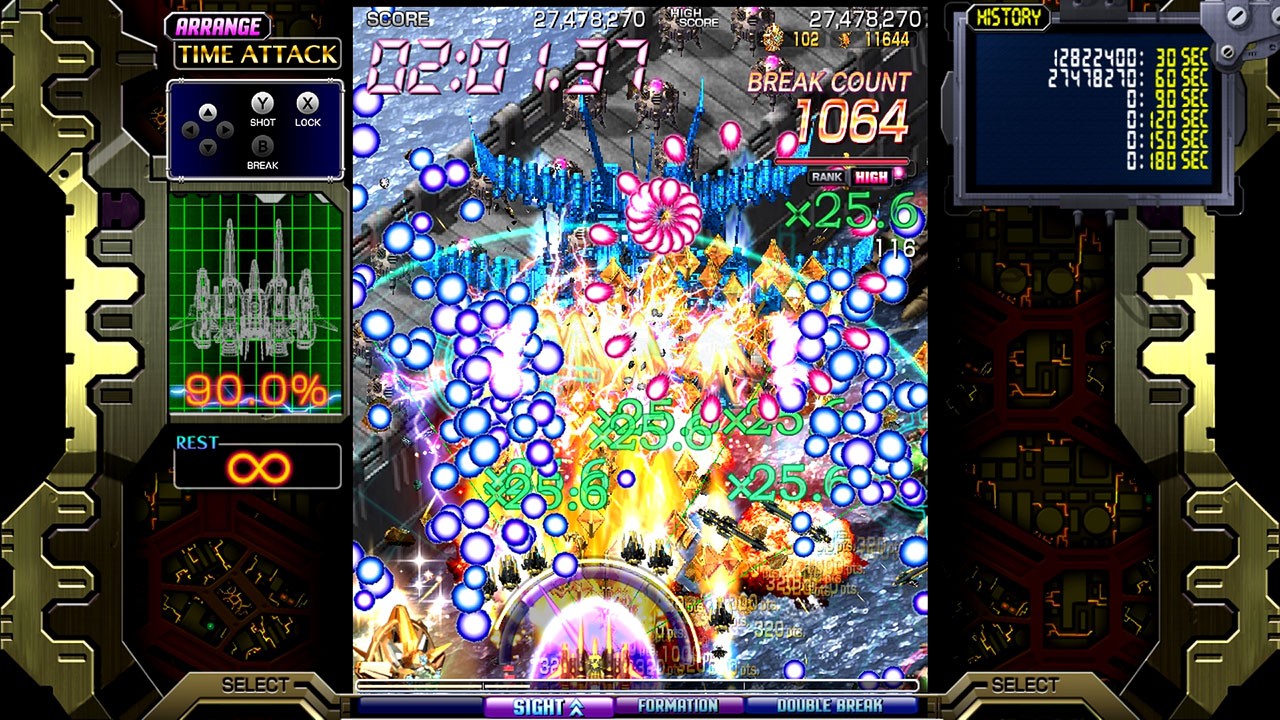 Crimzon Clover: World EXplosion is one of the better constructed danmaku games that asks a lot to keep in mind hitboxes, timers, multipliers and risk/rewards. Your primary attack modes focus on three buttons: shoot, lock and BREAK. Those first two are pretty straight forward, and change a tad depending on your ship choice. Shoot is neverending laser bullets, and lock is a cast net of perimeter shield that will target enemies and then fire when the lock button is released. Lock has the caveat of slowing down your ship’s movements while casting (which is extremely noticeable on ship type III), but you can do both at once. Thus, you can continually barrage the forward screen with bullets while actively setting up enemy-seeking lasers in the meantime, releasing and recharging to your heart’s content. It reminds me a LOT of Astebreed in that sense, but in a horizontal format with less bloom and less trying to concentrate on whatever the hell the characters are yelling about while I’m actively murdering hundreds of ships.

The Break technique is my favorite part of Crimzon Clover hands down, and it’s the best part of the risk/reward system in the game. As you continue to rack up points and destroy enemies, you build up a Break meter that triggers on three different levels. If you trigger the meter before it’s full, you unleash a bomb that sort of, kind of helps. I mean, it can eliminate bullets and take out minor enemies, so that’s nice but it’s also a one and done sort of deal. If you build up the Break meter entirely, you can turn on Break mode, where your ship transforms into a significantly more maddening version of itself, with a larger, more powerful and more intense laser range for a limited time. You can see your ship’s Break percentage counting down on the left HUD of the screen, so be ready. Additionally, if you can possibly stave off the itchy activation finger, you can do a double Break, where you Break then Break again and turn into just the biggest goddamn Archangel you can imagine. The satisfaction of being able to double Break before a boss arrives is magnificent: you’ll never feel as powerful as you do as when you face a boss not as David, but as a second Goliath.

Crimzon Clover: World EXplosion looks and feels exponentially better than the original Ignition version released on Steam. The graphics for everything have been tuned up, given sharper edges, crisper colours and significantly better animation and action. As with all bullet hell games, Crimzon Clover positively floods the screen with enemies, bullets, explosions and pick up items to grab to add to your score multiplier, and I didn’t experience a moment of letdown or drag. As anyone will tell you, the seconds where there was lag were after a boss fight, which I fully believe was on purpose to give it that “final victory” feel that we see in action movies and in anime. The smoothness of the action and the minimal latency is even more important in the new Arrange mode, where bombs and extra lives are entirely contingent on collecting items dropped by enemies (particularly the big ones), so making sure the game never putters out is exceedingly important. 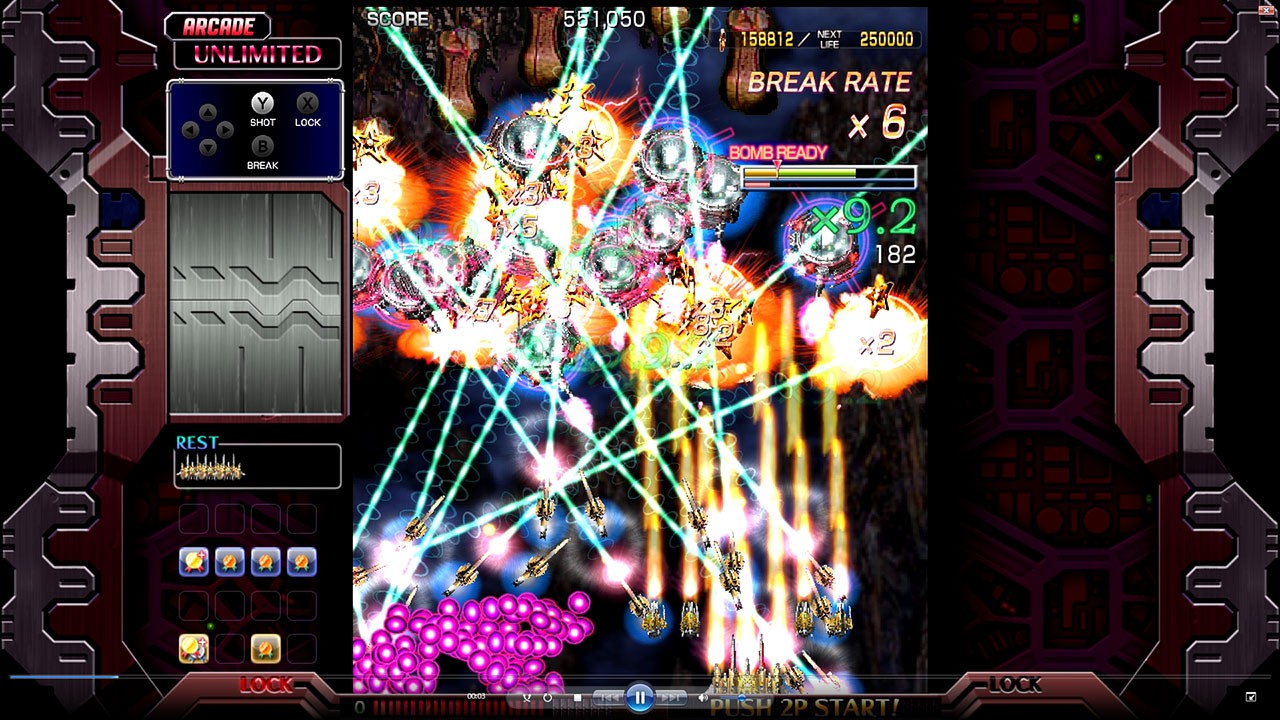 The soundtrack to Crimzon Clover will set your heart rate to incredibly high levels, so please make sure you don’t play this game with headphones if you’re someone suffering from a condition. Seriously, the music is so captivating and exciting, and you get pulled into the thrall of the entire experience within seconds of starting the game. This is one of those insane moments where you get totally caught up in the moment and feel like you’re actually piloting the ship, weaving and darting effortlessly through waves and curtains of bullets and lasers, and the music helps to instil that sensation of chaotic dancing. The fact is that the soundtrack to Crimzon Clover is lauded in video game circles: the CD from the original Comiket is frustratingly hard to find, so your best bet is to buy it directly from Steam to get DRM free copies. If you ever need to do some racing, some fighting or something that involves putting lives on the line, this is the music you want to bring you along. It’s honestly that damn good.

What makes Crimzon Clover: World EXplosion stand out from the other shmups and danmaku is the way the game can hook into players. The difficulty progression on normal mode is gradual with large but not unreasonable steps up in difficulty. By the time you get to the fourth level, you’re understanding the careful ballet formations you need to assume to get through different enemies, and constantly moving and shooting in proper strategy is the only survival technique. If you miss, if you misstep, you’re dead and there’s nothing you can do to stop this. Losing a ship not only makes your bonus for the stage disappear, it puts you in a terrible spot of trying to pick back up on the routine in mid-performance. If you’ve ever seen a child forget their steps during a recital, freeze, and then try to continue while they’re now three measures behind, that’s precisely what death in Crimzon Clover is like. However, that also doesn’t become an issue as long as you’re really feeling the groove of the game. Keeping up with the expectations, matching the different movements needed to stay alive, recognizing the difference between mapped and unmapped enemies/areas…it’s a beautiful learning curve. Combined with hilariously high scores, medals for accomplishments and the inexplicably awesome two-player mode for the normal arcade style means that you’ve got the best of all worlds in your hands.

Crimzon Clover: World EXplosion is a fantastic update and upgrade to a beloved and acclaimed shooter, and it’s worth every penny. If you can, I recommend getting it on the Switch for portable pandemonium, but it’s enjoyable on any system, anywhere. If you love bullet hell, you can’t miss this game. If you hate dodging and shooting, I won’t promise this will remedy your prejudice, but at least consider it: the freaking graphics and soundtrack will bring so much to the table.

Crimzon Clover: World EXplosion is a fantastic update and upgrade to a beloved and acclaimed shooter, and it’s worth every penny.