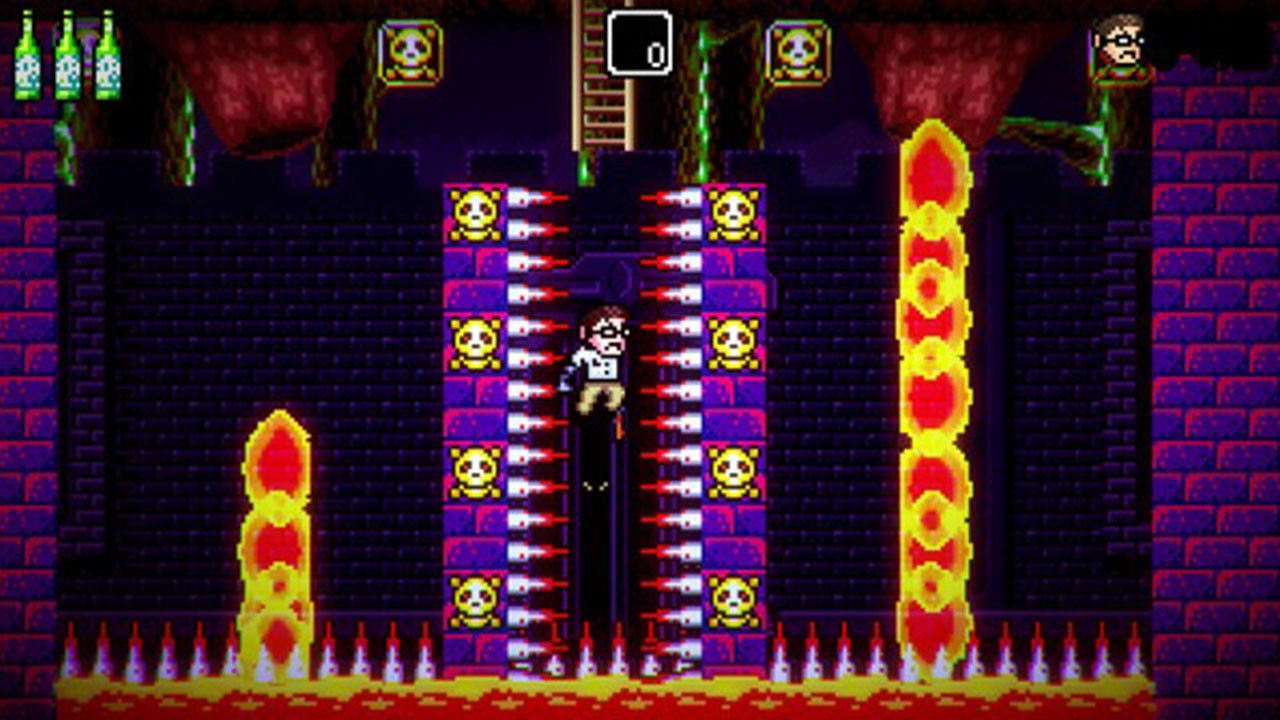 I don’t begrudge YouTube personalities as a whole or as a massive group. There are many out there who I understand both do what they love and inspire other would-be streamers to do so as well. Through second and third-hand experience, I’ve seen great acts of entertainment, thoughtful criticism and arguably benevolent charity from all types. The creation of a persona for YouTube is something that is carefully done to appeal to a specific fanbase, and the fact that I’m an online video Luddite and only use YouTube to check out movie trailers means that I am woefully unaware as to how to make a great character. So while I have heard the name Angry Video Game Nerd and know the gist of what he does, I haven’t actually watched any of his videos. Which makes reviewing the game based on his adventures a bit of an interesting challenge, but one that I was willing to do.

WIth Angry Video Game Nerd I & II Deluxe, players are essentially getting three games for the price of one, though the third game is neither available at the beginning nor is it necessary for the package to be enjoyed. The two available games follow a similar set of beats in which you can care about the plot or sincerely check out. You play the titular Angry Video Game Nerd, and, in both games, you’ve been sucked into the video game world, entirely against your will. The second game is a bit more meta because it recognizes this is the second time that it’s happened and the protagonist is still a bit aghast at it all. Both games present as retro-inspired side-scrolling action/adventures, though the actual genres tend to go a bit deeper thanks to a lot of referential moments throughout. In both cases, you need to fight your way through several levels of old school gaming in order to defeat whatever has brought you into the world, and it’s not an easy journey. Thankfully, you’re so well versed in playing old (and terrible) games that the adventure isn’t impossible: it’s just absolutely laden with incredibly profane and creative expletives throughout. 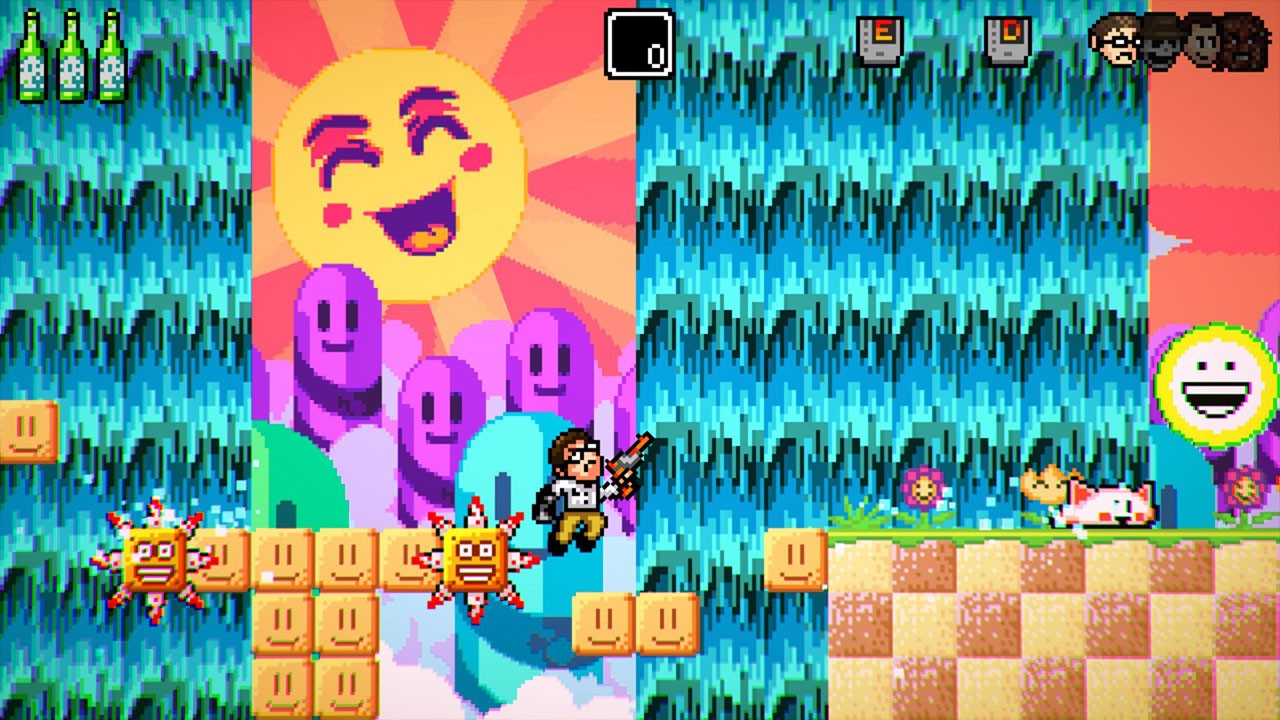 You can really look at this review from two perspectives: one from the dedicated fans of the AVGN, and one from a player who is either passively aware or totally unaware of his target audience. If you’re part of the former, this review is almost entirely pointless. From everything that I can tell, the games are perfectly on-brand for the humour and pacing of Angry Video Game Nerd videos. Every single second where the protagonist is alive is a chance for him to drop a long string of swears and insults that are, frankly, both lazy and creative in the same breath. You’ll see a lot of “fuck” pop up on your screen, you’ll see a lot of anger throughout, and you’ll run into a bunch of characters and trope references that probably mean something to longtime fans. Even the levels are named as such with places like Assholevania and Future Fuckballs 2010, which sounds like an edgy 12-year-old finally got the content filter taken off their search engine. The second game must have realized this turned off some potential buyers and they ditched the level names in favour of a huge linear map, which is arguably more visually appealing.

Also, as a result, some of the things don’t necessarily land with non-fans of the streamer. For example, several powerups throughout the different games feel like they’re references to something I might have encountered in the video series, either as running gags or as one and done gimmicks that did well. The first game has some kind of stage clearing bomb which is a well-trodden trope, no problem there. But it’s represented as some dude on a massive tank with long hair who looks insane. Not a clue on earth as to whether that’s from a game that I’ve never played or if it’s a cast member who’s known for wanton destruction. The whole thing is moot, as it does what I need it to do, and that’s where we get to the second, more important aspect: the delivery.

Straight up, Angry Video Game Nerd Adventures delivers on what it seeks to emulate and create. The games, both of them, come from a position of passionate love and hate of the old school design, highlighting and celebrating the flaws while also actively fixing them behind the scenes. These were the era of games where being fair or even fully complete didn’t matter because patches were impossible and the most prominent consumers were parents just buying something to distract their kids so they could do cocaine in peace. The first game in particular captures that flair successfully, crafting level design that is all about timing, minute hitboxes and repetitive deaths while also baking in a character who is fanatically angry about the unfairness of it all. The phrase “I’d rather have a fish drool in my ears” is so weirdly specific you can’t help but nod in agreement.

However, the difficulty is both adjustable and totally justified. There’s nothing that comes out of the levels that is from a place of rushed nonsense or green coders just doing their best with no idea of what’s happening. This is a deliberate creation that is doable and actually has a sense of satisfaction with completion. There are the four collectable cartridges per level that spell out NERD to signify that you did the level to the full extent, and there’s plenty of opportunities to make critical errors that will end your run. You can set the game to the easiest level (which you can do without curtailing the rest of the gaming experience) but still die instantly if you touch the death blocks that are prominent in both games. Also, if you hate yourself, you can crank the game up to a one-hit, one life death counter to see if you can brutalize through the entire game without being hit once. Spoiler: I couldn’t even do the tutorial, so screw that noise. 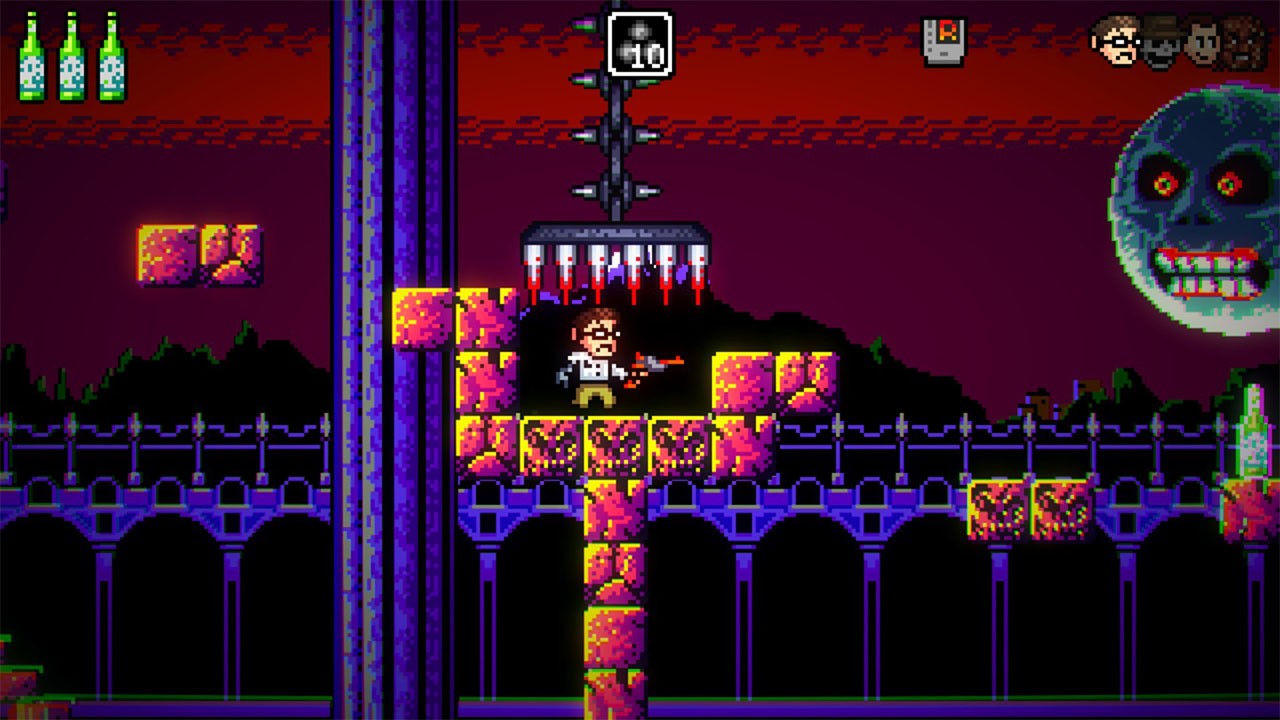 Also, having the Angry Video Game Nerd Adventures in a two-pack gives players a great perspective on how the games evolved but maintained some threads of humour and identity. The second one is a massive step up on every level with the exception of speed. The game is significantly larger, the graphics are MUCH better (Nerd Gaiden is a gorgeous world to explore), and the tropes are a bit more generally accessible. The first game referencing Custer’s Last Stand might go over some heads, but a Sonic the Hedgehog inspired world is definitely for everyone. The second game also just unfolds more naturally in terms of engagement. While the first one needed to have the difficulty tamped down for me to get anywhere in Blizzard of Balls, you can jump into the second game at normal and swim comfortably as long as you understand the concept of playing an NES game. It’s a more satisfying connection, and I would advise players to put more time into the second one of the first isn’t doing it for you.

And all the threads are there to keep the game together. The graphics continue to be pixel-based, with the second one taking some pretty massive upswings for background design. The soundtrack is a gorgeous orchestra of chiptune to give nods to a whole collection of gaming who’s who without naming them directly. The fact that my instinct was to shoot the tutorial fairy in the first game and I was allowed to do so made for a great start immediately. There’s a ton of gaming knowledge and appreciation baked into the anger and rage, and anyone who wants to try a bit of a blue journey can walk in the shoes of the Angry Video Game Nerd. Hell, I might need to try those videos now: remembering some of these games from my childhood made me angry too.

I’d use a quote from the protagonist here, but I think it would get us banned by the FCC.