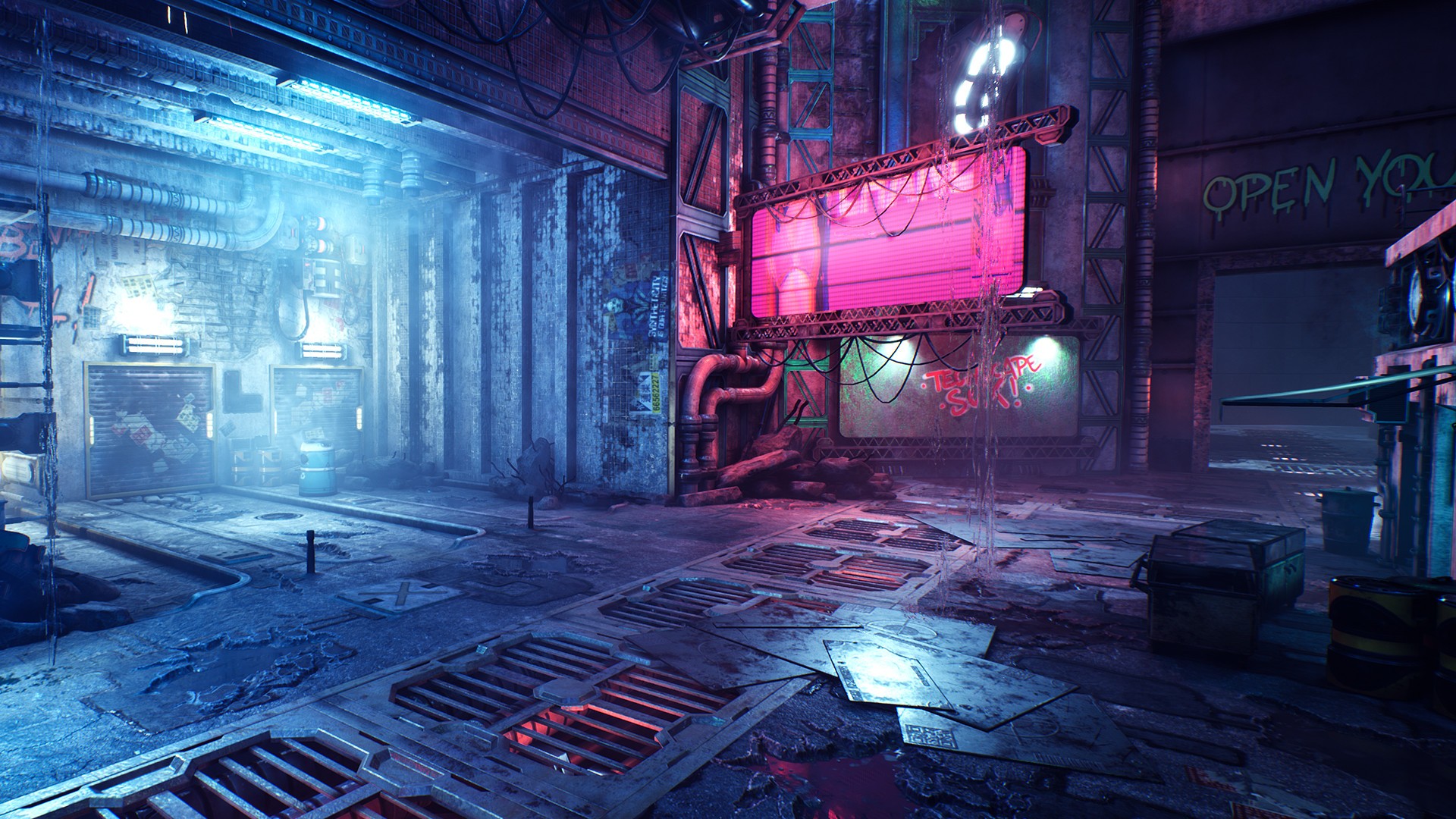 When it’s done well, cyberpunk is just the goddamn best. It’s got all the elements of the future that we like – robots, insane AI, technical body modification and infinite possibilities – intermingled with the future elements we actually have, like controlling shadow governments and dystopian outlooks for all. From Gibson to Stephenson, Shadowrun to Blade Runner, cyberpunk paints this amazing world that is so cool to experience in small doses that don’t have real world consequences. The last time I played an FPS with a cyberpunk feel to it, it was the ill fated Mirror’s Edge, which had so much going for it right up until they tried to make a sequel. FPS and cyberpunk are certainly no strangers, but it takes a certain amount of talent to make something that hits the notes just right and keeps the game in the bounds of fascination and entertainment. Thankfully, it seems that One More Level and Slipgate Ironworks were able to get the formula just right, and thank goodness for 505 Games being at the helm to bring it everywhere. While my comrades have already taken a look on the PS4 and PC respectively, it’s my pleasure to look at Ghostrunner on the Nintendo Switch.

Stop.  Don’t go any further. Don’t think about the screenshots and the heavily detailed, gorgeous 4K videos you’ve seen of other, more famous streamers who’ve taken to this amazing game already. That’s not fair to the Nintendo Switch and you know it. The graphics are significantly more watered down, the colours are a bit dimmer, and the details are murkier. There isn’t any clever blur effect to hide things, though a bit of bloom might be in there to accommodate for the significantly less powerful handheld mode, where me and my Switch Lite spent most of our time. I did this for an important reason: there is no shortage of where to play Ghostrunner. The Switch version is releasing a bit after the other versions, so the game is not only widely available, but also seeing speedrunners, modders and other variations attack the game from new angles. If you know the core of the game (the story, the mechanics, the central themes), then the question about the Switch version becomes literally that: how does the Switch meet the challenge, and does it bring anything new to the table?

If you’ve come to terms that this isn’t going to be the magnificent, blockbuster approach that you might see elsewhere, then you’re in for a ride of a lifetime, because Ghostrunner is fantastic. Set in the Dharma Tower, you’re a borderline amnesiac being known only as the Ghostrunner, who is being instructed by a disembodied voice to come and free it. You shortly find out this voice is known as The Architect, and it takes credit for creating you and also with designing Dharma Tower, which apparently houses the last remains of humanity. The Architect tasks you with taking out The Keymaster, who is responsible for the Architect’s imprisonment, and, if you know anything about cyberpunk, it’s always the devil you know than the devil you don’t. Also, if you know cyberpunk, you know that there’s bound to be some betrayal and some secrets revealed, because you’re a Freerunning killing machine with no memories: that isn’t a track you take in finishing school, that’s a result of some stuff happening. 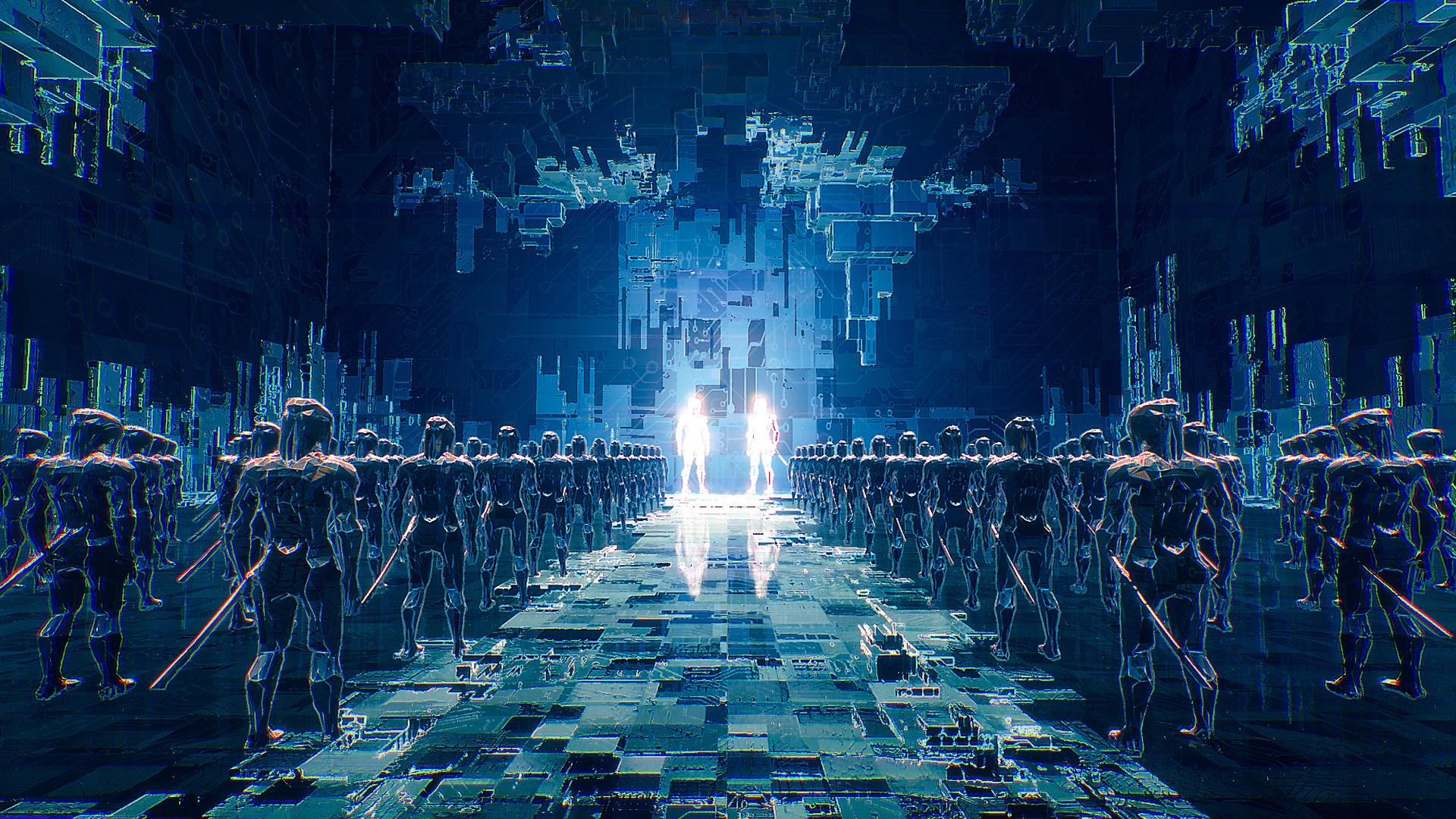 Ghostrunner is a first person game that is a combination of speed, precision and lethal accuracy. The Ghostrunner has the ability to run on basically any surface that presents as a wall, and to use a form of focus to slow down time, strafe in midair, and then dash forward like a bullet from heaven. As this is a game where you are on the outs with everyone you meet, you are constantly beset by dudes with guns, other dudes who can leap through space and time, some truly bullshit moments of security systems and, strangely, a couple of puzzle moments where you can slow down and play a poor man’s version of Tetris. That last part doesn’t really speak for the game as a whole, but it struck me as odd when it happened. Oh, and boss fights. In a game where you can die in a single hit, there are boss fights, and you can judge how fair that is when you’re not SCREAMING at your system because you keep dying again and again.

If you’re someone who enjoys gradual progression and a feeling of a fair, balanced game that progressively gets harder, you need to head elsewhere. Ghostrunner is, from the drop, a game that is positively ballistic in terms of challenge. You have about two minutes to figure out the instructions on how to function as a Ghostrunner before you’re dropped into your first scenario of piloting around a room, sliding, jumping and bullet timing to take out multiple guards who only need to land one shot in order to disable you. This opening moment, which takes place only seconds after you really start playing the game, took me something like ten minutes to get down. Ten minutes of running, falling, getting shot, missing ledges, getting inexplicably stuck in a tiny nook from where there is no recovery, and, finally, mastering some truly badass lethal takedowns.

If at all possible, I recommend using a Bluetooth or wired controller when playing Ghostrunner. You want your most comfortable, most responsive and hardiest controller on hand when you’re rapidly leaping, sliding and dashing through the game, and this is important for three reasons. One, giving yourself a bit of perspective distance from your Switch is good, even in portable mode, so that you can focus on the grander details of the game and where you want to go. It is, even with the supremely downgraded visuals, a very interesting world to behold, and I think of Dharma Tower as being akin to Mega-City One in terms of grim design combined with chits of colour and hope. Two, separating yourself from the Switch lowers the possibility of hurling your Switch across the room when you die for the eight hundredth time in the same small space, and your Switch doesn’t deserve that. Three, if you simply must throw something, a controller will bear the damage significantly better and is cheaper to replace if need be. In all honesty, you should play it docked, but I gotta be honest: I didn’t mind the portable mode. 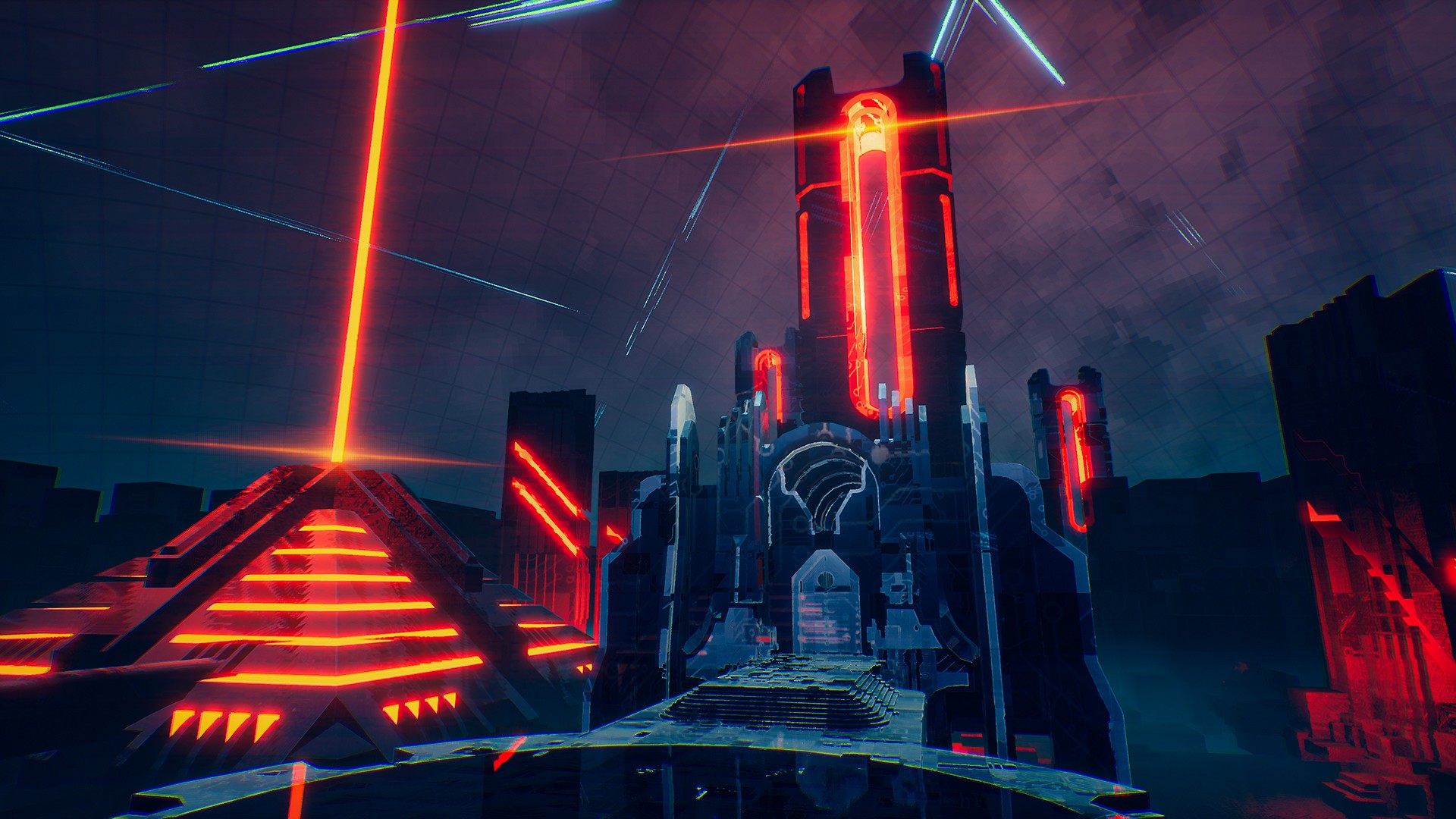 Ignoring a lot of the criticism about the lost visuals, there’s a quality about Ghostrunner on the Switch that I haven’t seen in a lot of modern FPS ports, and I’m trying to put my finger on it. For one, the audio portion is still crystal clear, and it matters so much in this story driven, ballistically hard game. The soundtrack is this amazing synth mixture that is both driving and evocative, both in the real world and when the Architect asks the Ghostrunner (who we eventually learn is named Jack) to enter into the Cybervoid. The game’s upgrade system, though gradual, does add more degrees of finesse to how the Ghostrunner is able to move and swing through the world, eventually turning you into a damn Spiderman caricature (which is the first thing I thought of during the intro to that Doc Ock character). Once you figure out the perfect degree of sensitivity for your controller, you learn how to best fine tune your own targeting and make it work for the whole.

But the biggest thing is that this didn’t make me sick. I’ve raised my complaints and problems about first person games in the past and how the constant swinging of the camera and some of the blur effects trigger some serious nausea, and it just never came. In spite of a game forcing you to move around and sometimes spin 180 degrees in mid air to Boost back to where you came from, my stomach stayed put. Maybe it was because I was so focused on success, maybe there’s something to be said for listening to the right music while focused on a task, but it just worked. Crysis helped put me in the right mindset that we could find the right degree for a FPS game to exist on the Switch successfully, and Ghostrunner actually kept me amped all the way through. In a game that DEMANDS fast reactions and high performance, I was extremely satisfied with the outcome. Maybe I missed some key moments because of the downgrade in graphics, I don’t know, but I frigging enjoyed myself, and that’s something that players learn to accept in order to let gaming exist on the Switch. It sounds like a cop-out, and it is. When I want to see a game in all its glory because I have the television and the rig to support it, I’ll grab my PC or maybe even a PS5 (considering it). But when I want to see what a game is all about, I can grab it on my Switch and find out wherever I am. I don’t have as much time to sit down as I used to. I was able to play Ghostrunner on the train and during my lunch break without needing to lug around a gaming laptop. That was a thing that happened, and I loved it.

Ghostrunner is frigging hard, and it will make you tear your hair out in frustration to land all the exchanges, pinpoint assassinations and the entirety of trying to scale that security system laser tower, holy shit I hated that thing. But it’s compelling, it’s exciting, it’s not terrifically long as a game, but damn is it great as an experience. If you need the graphics, fair enough, get it on another console. But if you just want to see what the hell is going on, the Nintendo Switch is a fantastic location for a brand new Ghostrunner to be born.

A fantastic voyage that is insanely hard, blending together the best of SUPERHOT, Furi and Mirror’s Edge while still delivering a unique, memorable story.