Home
/
Blog
/
Looking back at The Line – Potential game of the year? Not quite.
Share Review

The end of another year is nigh, and you know what that means – ‘best of lists’ – lots of them. While having a think about my favourite games of a year that has flown by a little too quickly for my tastes, I decided to go back to 2K Games’, The Line….or, Spec Ops: The Line if you’re not into the whole brevity thing. I liked the game quite a bit on release (see my original review here), and was interested to see how it held up on a second playthrough. A lot was made of The Line’s dark storyline and mature storytelling, but then, just as much was made of its ho-hum combat and run of the mill mechanics, and honestly; they just about cancel each other out.

Yes, the character development is relatively thought-provoking (for a shooter anyway), the setting is interesting enough and the script and voice acting are both well above the admittedly low standards set by a genre aimed so directly towards the tastes of 14 year old boys, but the fact remains that the shooter underneath, the guts of the experience so to speak, is still pretty weak (in movie terms, it’s as if Apocalypse Now was directed by Michael Bay). It’s not terrible by any stretch, but take away the compellingly bleak tale of desperation and the disturbingly decrepit grandeur of Dubai and what you’re left with is basically Inversion without the cool gravity thing. Mechanically, The Line is a shooter by numbers in the worst possible sense.

And anyway, mechanics aside – is the story even all that great? Ok, that’s pretty unfair – the story is actually very good; this is comparatively mature storytelling and is without question a step in the right direction for the industry (and certainly the genre). The problem is, despite flying the flag for storytelling within the medium, in direct comparison to the movies that The Line so eagerly apes, it still falls comfortably short of the dramatic beats offered in those movies and certainly delivers very little in the way of new or ground breaking material. All the major themes have been handpicked from an array of movies that, for the most part, handle the issues in question in more interesting, thought provoking ways, and as for the actual acting; while it may be admirably believable, it’s hardly Brando-esque in quality.

Now, I’m not trying to undermine Yager and 2K Games’ success here; in light of its direct competition (namely, other videogames), The Line shows some real progression, but seen as a whole, The Line is still a relatively mediocre shooter. What it does well, it does very well, but we’re still of a time in which mechanics play a massive part in the overall experience of any videogame and, despite Yager’s best efforts to cover them up with an interesting story and a mostly captivating setting, the mechanical cracks still show through. 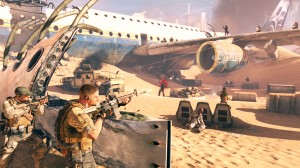 Spec Ops: The Line is a good game; the deterioration of its three leads as they make their way deeper into the heart of a diseased and dilapidated Dubai makes for compelling viewing and while the actual gameplay itself is certainly competent, it’s not nearly good enough to put The Line in the reckoning for game of the year. Its advancements in storytelling and brave decision making mechanics may well have a longer lasting impression on the industry than the game that takes that accolade, but in the here and now, The Line fails to deliver a consistently convincing experience.