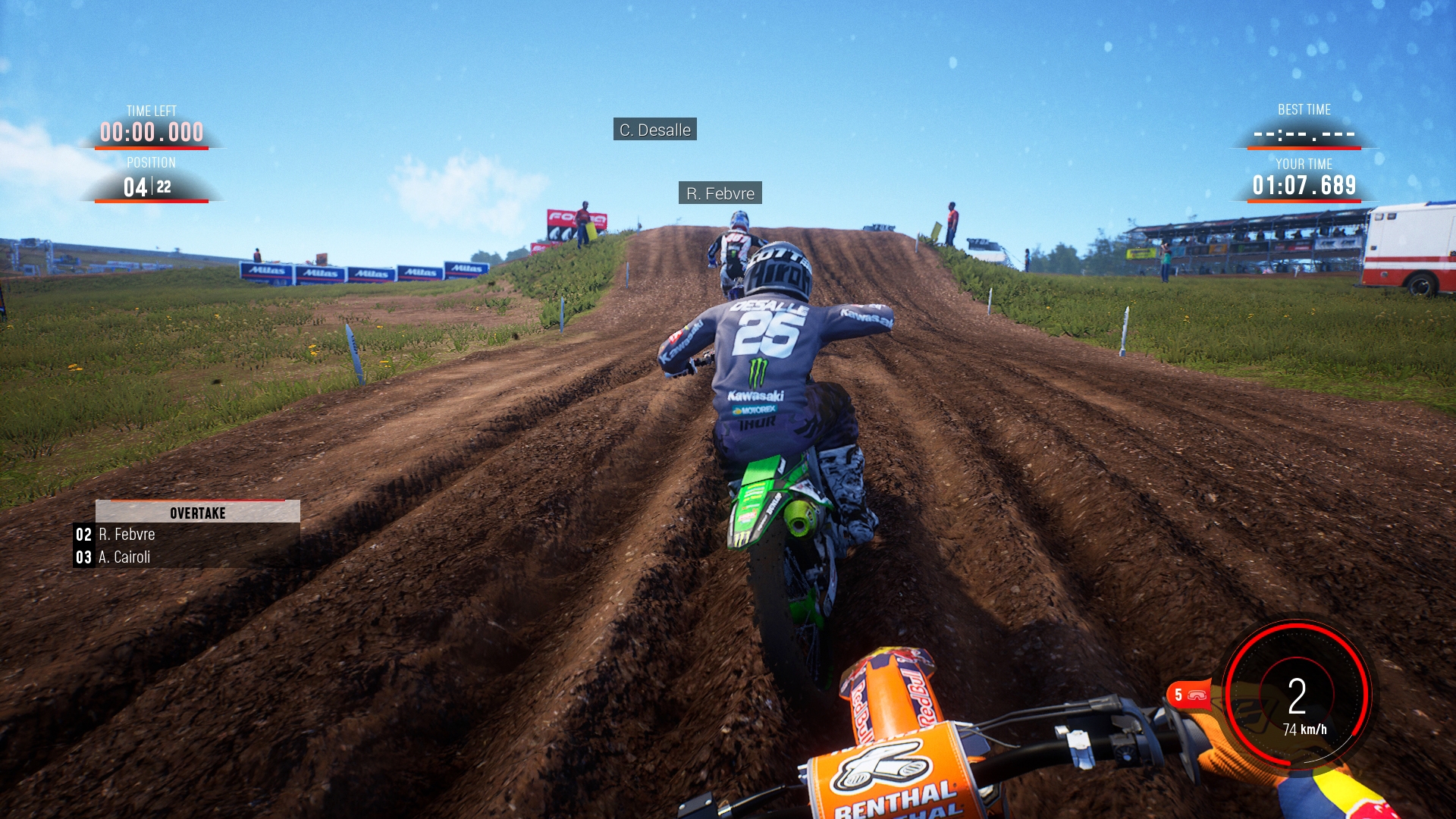 Just a few short months after Milestone’s enjoyable if occasionally bland, MotoGP 19 comes their latest take on the far muddier world of motocross racing via the latest entry in their long running MXGP series. Like MotoGP before it, MXGP 2019 is a well-made racer, one clearly built by a knowledgeable and passionate developer, but one slightly let down by a limited budget and its occasional lack of fun.

If you’re a purist of the sport, then like MotoGP 19, Milestone has you covered – this is an exhaustive, detailed and accurate representation of the sport, but if you’re coming to this as somebody who dips a toe in to the wild world of motocross (like myself), then you might be left slightly disappointed by the games’ apparent unwillingness to loosen the reigns.

Perhaps that is a tad unfair given that this is clearly aimed towards the simulation end of the racing spectrum, but while that approach seems perfectly suitable when it comes to the more controlled world of traditional motor racing, when it comes the decidedly wilder and more colourful world of motocross, it can, and occasionally does, feel a tad restrictive. Don’t get me wrong, this is a perfectly solid recreation of the sport, one that many will invariably appreciate, I just wish that they had limited their commitment to accurate recreation and perhaps taken a slightly more stylised approach – bigger jumps, perhaps a few Sega blue skies? It’s a game that, for all that it does well (which is a great deal), remains one that could do with an injection of personality.

That’s more of a personal preference though – for fans of the series and hardcore fans of the sport, the biggest issue they are likely to have with MXGP 2019 is that of familiarity. The new additions are all welcome and largely successful, but at its core, this is a very similar game to its predecessors and far from the major step forward that fans would have been hoping for. While minor improvements have been made across the board, legacy issues remain and, despite the developer’s best efforts, this still feels like a decidedly second tier racer. 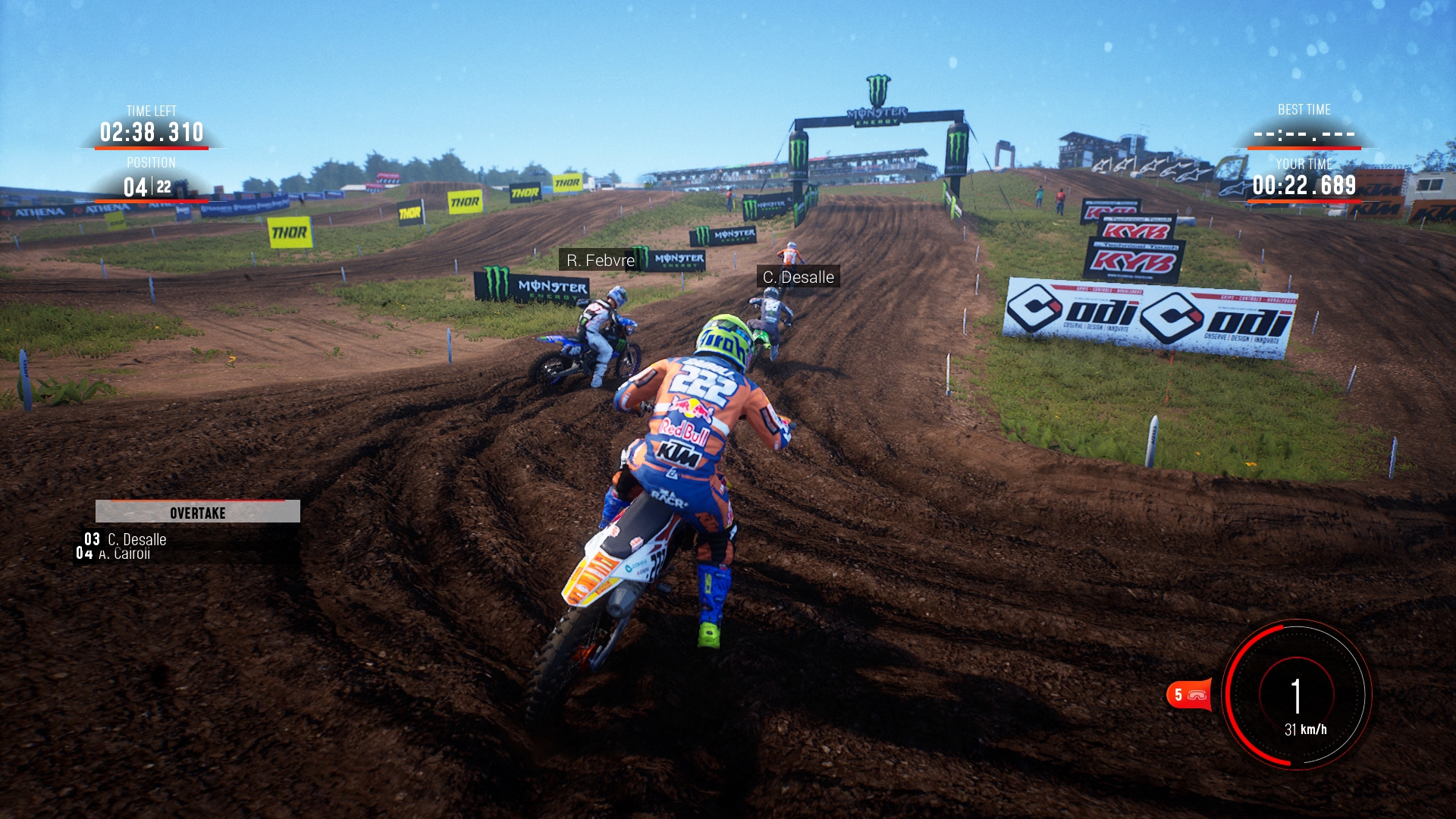 If you can look past the familiarity and the somewhat limited budget though, MXGP 2019 remains a very enjoyable and truly authentic take on the sport. The racing itself, while initially very challenging, can be catered to both skill level and personal preference. Full simulation on the higher difficulty settings was well beyond me, but by turning on some of the assists and taking down the difficulty, I was able to find a level that was both challenging and enjoyable.

Whether it be a more arcade-centric approach or full on simulation though, the weighty, realistic physics, the aggressive AI and the consistently great sense of speed ensure that the racing and the jumps feel genuinely authentic and rarely anything less than exciting. Races always feel keenly contested with the array of potential pitfalls and a pack full of competing racers (whether they be AI or human) making each race feel genuinely unique and brilliantly competitive.

Adding to that sense of realism and fun is the dynamic weather and deforming tracks. Combined, they can create ever changing tracks that look great while adding a real sense of diversity to each race. Whether it be the natural changing of the racing line or the creation of impromptu puddles as the potentially bad weather takes its toll on the track, these changes are much more than visual additions to gameplay with bad weather in particular having a potentially dramatic effect on any given race.

Beyond the weather and deforming race tracks, from a presentational perspective, like most of Milestone’s racers, MXGP is a bit of a mixed bag. Despite a lack of finer details in the surroundings, in motion, the game looks really good. The inclusion of the official licence adds to the sense of overall authenticity with the bikes in particular both looking and sounding the part. The lack of any kind of commentary does make the game sound a little empty at times, but given that this is a simulation first and foremost, the lack of said commentary actually makes perfect sense. The real issues (if you could call them that), are found in the menus. It all works fine of course, but like many aspects of the game, it lacks a bit of character. From top to bottom, everything about MXGP is perfectly serviceable, but for a sport that is naturally rich in spectacle, something has certainly been lost in the translation thanks to Milestone’s solid but relatively safe approach to the games’ overall presentation. 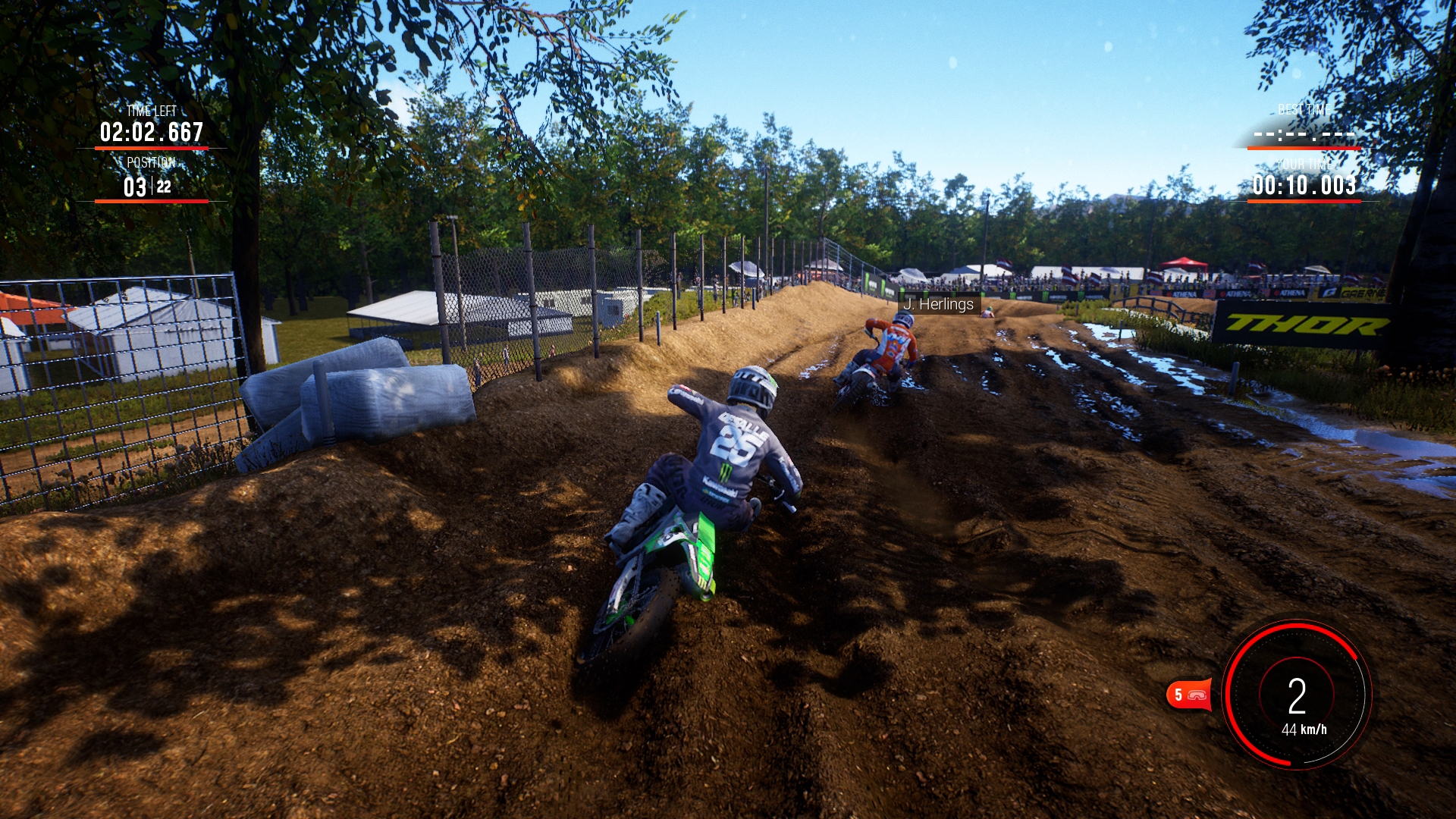 Beyond the return of the standard Grand Prix mode and a solid if somewhat quiet section of online options (finding a game can be more than a little tricky), the big new additions for MXGP 2019 come in the form of the surprisingly robust track editor and the enjoyably customisable Playground area.

The track editor in particular is a major new addition, one that will likely delight hardcore fans of the sport while ostensibly allowing for a never ending stream of new content. How committed the fan-base will be to the ongoing creation of enjoyable new courses remains to be seen, but the early signs are positive, thanks in no small part to the track editors ease of use and fantastically detailed tutorial. Putting together a basic track takes no time at all, but for those looking to make something a bit special, MXGP 2019’s track editor delivers a huge number of additional options and plenty of depth to create something genuinely unique.

The free roaming Playground area also allows for customisation, but above all else, allows you the chance to get to grips with the games’ mechanics in a less taxing environment, while also allowing you to take part in unique challenges or easily created waypoint races that can be enjoyed online or off. The implementation of online challenges can feel a tad clunky at times, but this remains a welcome and largely enjoyable addition, one that has the potential to add the kind of personality that other elements of the game often lack.

It could do with a bit more personality, and despite the very enjoyable racing, elements of MXGP 2019 will feel very familiar to fans of the series, but despite its lack of notable changes to the core experience, Milestone’s latest remains a largely fantastic take on this niche offshoot of traditional motor racing. The weather effects are fantastic, the deformable courses have a genuinely tangible effect on races and the handling (whether it be full-on simulation or with the assists on) is a great as it has ever been. The new additions still need a bit of work, but both the track editor and the Playground mode are great new additions, ones that show a glimpse of the direction the series might take in the future. As it stands, it still feels like Milestone and MXGP have one foot (or wheel) in the past, but that shouldn’t detract from what is an otherwise hugely enjoyable racer.

Despite its lack of notable changes to the core experience, Milestone’s latest remains a largely fantastic take on this niche offshoot of traditional motor racing.