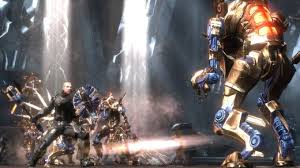 I’ve been making my way through Diablo III recently, and while it has proved an extremely addictive experience, it got me thinking about what remains my favourite dungeon crawler on Xbox 360, Silicon Knights’ rather underappreciated, Too Human.

Let me start by saying this though – I hated the Too Human demo…..hated it. After all the waiting, my expectations for Silicon Knights’ dungeon crawler were sky high, but when I finally got to play the game, well, things just didn’t add up; it didn’t look that great, the controls felt unwieldy and the universe didn’t seem to match the positive initial impressions gleaned from the myriad of screenshots I had gone through beforehand…….where the hell did all that development time go? Still, like the trooper that I am, I grinded my way through the demo (no pun intended), happy in the knowledge that I would never go near the game again. Well, that’s what I thought anyway.

I deleted the demo in what my fiancé might refer to as, ‘a huff’, but for one reason or another, I couldn’t get the game out of my head. I just couldn’t shake the feeling that I hadn’t given Too Human a fair crack of the whip so to speak. So, a week or so later, I gave in to that little voice in the back of my head and decided to give it another blast. Now, I don’t know exactly what happened in those 7 days, but this time around it felt like I was playing a very different game. Maybe it was the removal of expectations? Maybe it was a willingness to embrace the unique control scheme? Whatever it was, my view of the game second time around couldn’t have been further removed from that initial response.

From hating it just a few days earlier, I suddenly found myself, as if by magic, a Too Human covert – I loved it! The graphics, the universe, even the control scheme. All those things that I hated a week prior, I suddenly found enthralling. After playing through the demo a few more times I decided that a full purchase was a necessity…..needless to say, I was not disappointed with my decision. 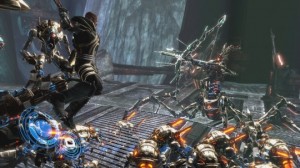 I knew that I was a sucker for a good dungeon crawler; the addictive grinding, the looting, the item experimentation, I just didn’t know I could enjoy one quite as much as Too Human. The unique mix of Norse mythology and futuristic cybernetics is hugely refreshing for a genre that usually falls back on the relative safety of orcs and goblins. The control scheme, something that proved a bridge too far for many gamers, also reveals itself to be both refreshing and intuitive once accepted and embraced and while the graphics may not blow you away, Too Human’s impressive art design combined with the games solid technical foundations make it a pleasing visual experience (even if some of the environments do get a tad repetitive later in the game).

Basically, what I’m trying to say is; preconceptions and first impressions aside, Too Human is well worth another look, especially when that look will cost you less than a pint of lager.