Home
/
Blog
/
Will You be Buying a Console in November?
Share Review 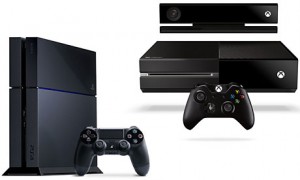 So, November isn’t far away is it? In just a  couple of months, the log awaited and arguably overdue next-gen consoles will arrive on store shelves around the country, and for the first time in my life, I’ll be picking one of them up on launch day. For previous generations, money (of a lack thereof) dictated that I wait until Christmas or a major price drop before picking up a shiny new console, but with a proper grown up job comes the disposable income required to make such a wild and potentially unnecessary choice.

I say unnecessary as, despite believing that the launch line-ups are actually quite strong despite the lack of genuine killer-app, the fact remains that, while the current-gen consoles are beginning to look a little long in the tooth, with an array of new releases still on the horizon, my already outrageous back catalogue in need of urgent attention, and of course, a little game by the name of GTA V still to play, I really don’t need a new console.

That’s common sense talking though, and when it comes to the purchase of a new console, common sense can get to France. Whether it makes sense or not, the fact of the matter is, I’m getting a new console……..I need a new console. GTA V might be technically spectacular, and yes, there are still great games to play on the current gen, but after nearly eight years of the same tech, I need something new. The launch line-up may be devoid of anything particularly artistic or revolutionary, but come on, those games sure do look pretty.

It would be easy to argue that many of those launch games will be available on 360/PS3, and yes, that’s both true and valid, but I know what I’m like. I’m not what you’d call a graphics whore, but knowing that a better version is out there will drive me crazy. Of course, on that basis, many would understandably point me towards the cutting edge world of PC gaming, but honestly, PC gaming is far too much effort. I came to peace with the fact that I’ll never be a PC gamer a long time ago, so I’ve, over the years, become naturally comfortable with the fact that PC games will often look better – but console games? No way, I have to have the best, and come November, the best, technically speaking at least, will be the PS4 and/or Xbox One. 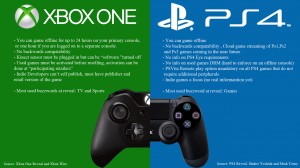 So, I’ve made my mind up and made my pre-order. Come the 22nd of November, I expect to receive a swanky new Xbox One in the post. I’d love to say that it was a tough choice, but the superior launch line-up and the promise of Titanfall sealed the deal early doors. Also, while everything said and shown about the PS4 thus far points towards a well-made, technically impressive console, I still feel a little burned by the PS3. It may have had some of the best first party exclusives of the generation, but the console is actually a bit of a dog. Online isn’t up to scratch (still), the Trophy system is a pain in the ass, having to synch is annoying, and above all else, downloads and updates take ages……bloody ages. Sony have talked a good game thus far and Microsoft has had an array of well publicised PR disasters, but until Sony can convince me that they’ve got their shit together behind the scenes, I’m sticking with Microsoft. Sure, PS Plus is one of the greatest deals of all time, but that doesn’t stop me wishing that it was on the Xbox 360 instead.

Anyway, that’s my view and my choice. Will you be picking up a next generation console in November, and if so, which one?