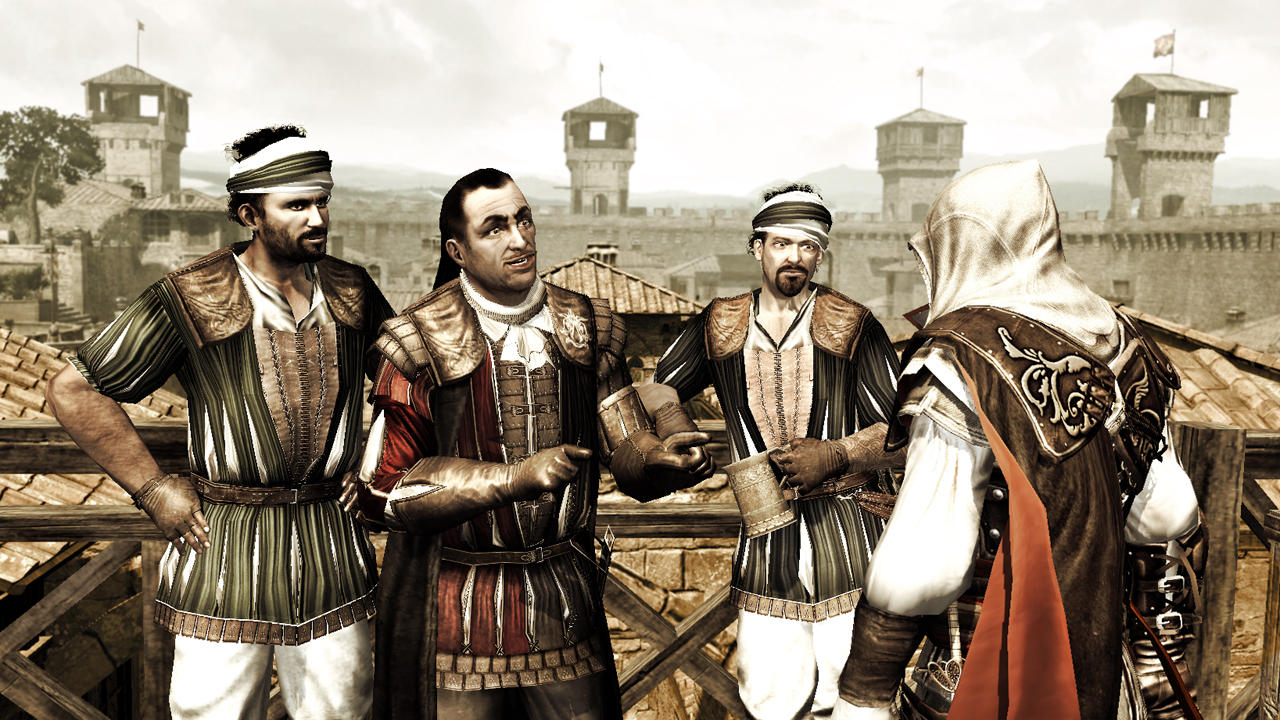 Released just a year after the outstanding Assassin’s Creed 2, Brotherhood’s relatively short development time put it under pressure from the very moment it was announced. Gamers accustomed to the extremely high standards set by the first two games in the series were inevitably worried that Brotherhood would turn out to be little more than a cynical cash-in on the previous successes of the franchise. Has Brotherhood tarnished the series stellar reputation or has Ubisoft Montreal managed to deliver a title worthy of the Assassin’s Creed name in just 12 months?

Well, you’ll be glad to hear that the extremely talented team at Ubisoft Montreal has not only managed to deliver a fitting entry into the series, but they’ve managed it with quite a bit of quality to spare. After the downright unfair roasting that Halo: ODST received just a year earlier, Ubisoft must have been only too aware of the pressure that they were under by releasing what is essentially a full priced expansion – the gaming community is a cynical bunch and the Assassin’s Creed franchise would be an extremely easy target if Ubisoft were to ever let its high standards slip.

Although it won’t appease every gamer out there (what could?), Assassin’s Creed: Brotherhood has so much quality content running through it that hating it for not being Assassin’s Creed III almost seems like a waste of time. Sure it doesn’t have the same impact that Assassin’s Creed II had when it was released last year, but Brotherhood is nonetheless a first-rate product with exceptional production values, fantastic, if somewhat familiar gameplay mechanics, and, in the city of Rome, one of the finest virtual playgrounds ever created.

While the decision to have just one city in Brotherhood could have so easily planted the seeds of dissent in the gaming community, the size, diversity, and attention to detail found across every inch of the city soon lays any lingering doubts regarding quality or commitment to rest. Beyond simply allowing the team to concentrate all their resources on re-creating this most magnificent of cities, Brotherhood’s emphasis on just one location, albeit an admittedly very large one, has allowed Ubisoft Montreal to change the structure of the game.

Syncing is still a major part of the experience, but with just 9 sequences available to the main narrative, the game’s emphasis has been moved towards side missions and Rome’s ecosystem. Although side missions have always been a part of the franchise, here, not only are they more varied than ever but they also manage to deliver some of the finest missions of the series to date. You could plow through the main story in well under a dozen hours, but with so many fantastic distractions to partake in, to do so would be to totally miss a large proportion of Brotherhood’s charms. 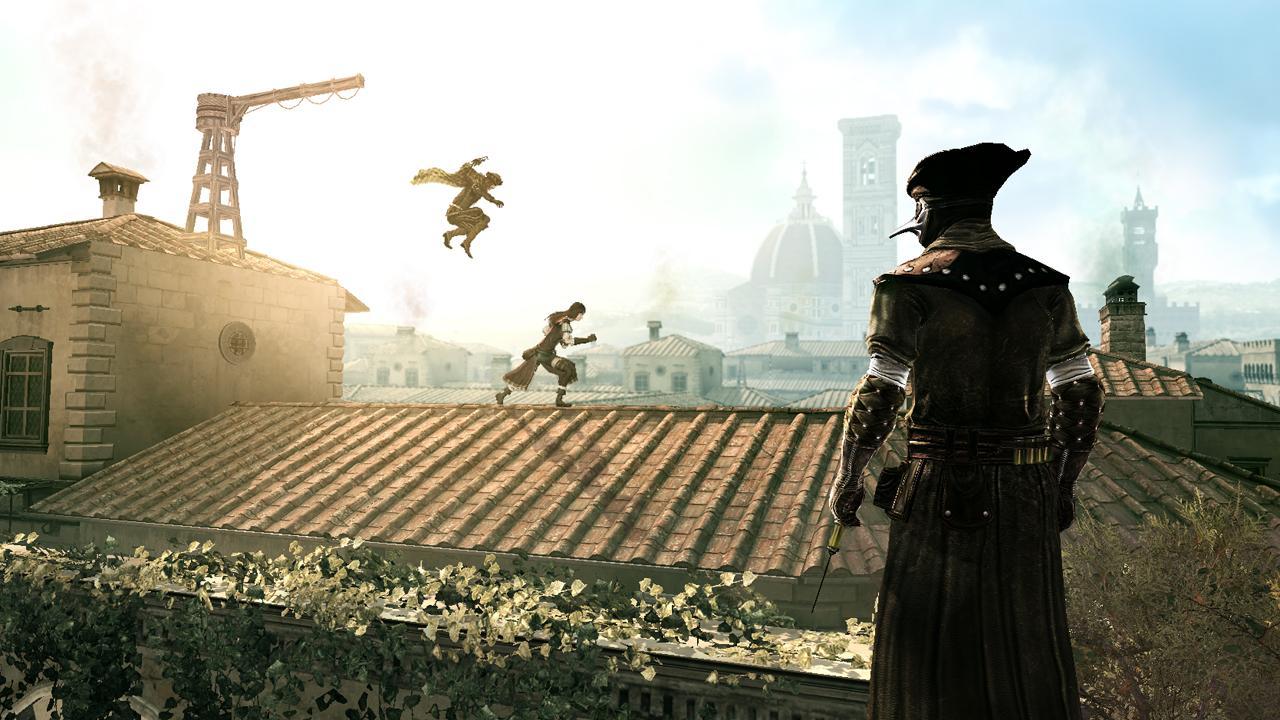 Although the story, which carries on almost immediately after the events of Assassin’s Creed II isn’t anywhere near as epic as its decades-spanning forbearer, Brotherhood’s tale, which sees you chasing down the dastardly Rodrigo Borgia to Rome in order to take out the family and return the now stolen Apple of Eden, does have some pretty major repercussions for the ongoing story-arc of the series. Although the continuing tale of the ever-awesome Ezio isn’t likely to have huge ramifications on the direction that the inevitable Assassin’s Creed III will take, the portions of the story told from Desmond’s point of view in modern-day Italy certainly will. I obviously won’t divulge any more details for fear of spoiling the surprise, but needless to say, fans of Assassin’s Creed’s epic yarn will definitely want to pick up Brotherhood.

Regardless of your views on the story, for the majority of gamers, Assassin’s Creed’s parkour-infused gameplay has always been the series strongest selling point. Although not far removed from the gameplay found in Assassin’s Creed II, it’s not like the core gameplay has suddenly gotten stale overnight. The combat system, with its continued emphasis on counter-attacking still, isn’t perfect, but the inclusion of a one-hit-kill attack certainly makes large-scale encounters less cumbersome, time-sapping affairs. As for the rest, it’s largely unchanged and still largely awesome. Be it a perfectly executed stealth assassination, a high-speed escape across the rooftops or a swift ascent to one of Rome’s many soaring towers, Brotherhood’s core mechanics are as exciting as ever.

Speaking of towers; part of Brotherhood’s revised structure is that before you can begin to rebuild any of Rome’s numerous districts and buy up properties in the area, the Borgia tower of that district and its captain need to be taken out. Essentially a more epic version of the traditional viewpoint synchronizations from the previous games, these challenge you with altogether trickier assents followed by a decent scrap when you get to the top. Once complete, you can get on with cleaning up the district and making some serious long-term financial gains.

While synchronization of an area is completed in the usual mission based manner, achieving full synchronization, which unlocks a collection of extremely interesting repressed memories, is only achieved by completing missions under certain conditions –  be it not touching the ground, going unnoticed or using specific means to take out your prey. The full synchronization conditions add an extra layer to gameplay and while their completion isn’t required for progression, they do offer encouragement to approach missions in ways that perhaps you usually wouldn’t have tried.

Another of the game’s many non-essential missions include the return of the puzzles that left so many gamers (myself included) scratching their heads back in ACII. Wisely, these equally tricky visual based puzzles are not essential to keep the narrative flowing, but like so much else in Brotherhood, are extremely welcome additions. 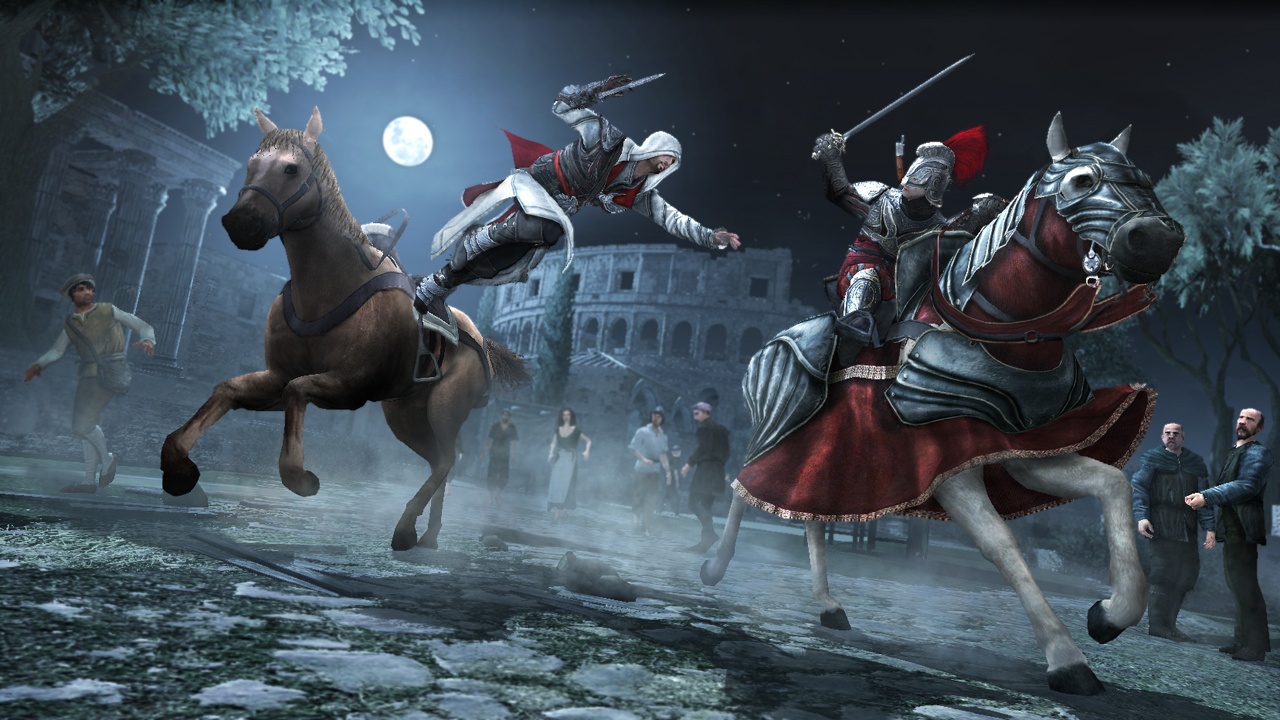 Outside of the usual side missions that include assassinations, races and teaching local thugs a lesson, Brotherhood also has a collection of side missions that are linked to the various groups around the city. Be it for the assassins, the courtesans or cities mercenary groups, these missions take the basic side missions and flesh them out into something more substantial.

Fans will also be happy to hear that the fantastic Assassins Tombs from ACII have returned in the form of the Followers of Romulus Lairs. Although similar in design to the Assassins Tombs, the Followers of Romulas Lairs are more varied with an even greater emphasis on pure gameplay and challenge and, like in the case of ACII, deliver some of Brotherhood’s standout moments.

The final major addition to Brotherhood is the inclusion of assassin recruitment. This adds an additional tactical layer to the core gameplay and for those who really pursue it, provides a pleasing risk/reward element that can become surprisingly addictive. Available about half way through the adventure, assassin recruitment allows you to assist citizens fighting guards on the street with the option to take them on as low level, poorly skilled assassins. These assassins can then be trained up and used at your discretion. With space for up to 10 assassins available, get them all trained up and you’ll have a solid fighting force at your disposal come fighting time. On top of calling on them for skirmishes, you can send your men off around Europe on missions with the aim of collecting additional XP, money, and items – there is the danger that some of your assassins won’t make it back of course, but that makes it all the more fun.

Rounding off Brotherhood’s impressive package is a robust multiplayer mode created by the team that brought us Splinter Cell’s outstanding Spies vs. Mercs mode. Offering a pleasing change of pace for those a little tired of all the high intensity online multiplayer found in the majority of today’s games, expect this to pick up quite a solid community over the holiday season. The slow-paced, patient stalking works well amidst the games surprisingly varied levels and distinctive cast of characters and the now all but pre-requisite perk system should also keep gamers coming back for quite a few months to come.

The only thing holding Brotherhood back from greatness is an overriding sense of familiarity. Judged on its own merits, it’s a fantastic adventure crammed with things to see and do. Rome is arguably Ubisoft Montreal’s finest work to date, filled with truly spectacular architecture and blessed with a variety of mission types and challenges that surpasses both of its forbearers. The story may not deliver much in the way of major surprises but the gameplay is first rate from beginning to end. If you can get over the fact that Brotherhood is essentially Assassin’s Creed 2.5, then you’ll be in for one hell of a ride.