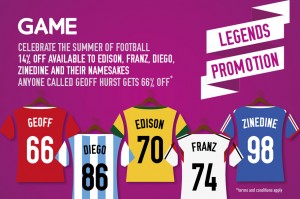 Starting on June 4th and running for 10 days until June 14th, GAME will be offering 14% off the price of EA SPORTS 2014 FIFA World Cup Brazil to anyone named Zinedine, Diego, Franz or Edison – in reference to Zidane, Maradona, Beckenbauer and Pele respectively.  And any customers named Geoff Hurst will be entitled to a whopping 66% discount.

The offer is in-store only and seems to be restricted to PS3 and Xbox 360 versions of the game so PS4, Xbox One and PC customers may be left feeling overlooked.  For full terms and conditions please click here.

The UK Electoral Roll only shows 74 Geoffrey Hursts in the UK however, and it’s unlikely there are too many named Zinedine or Edison – but perhaps there will a sizeable number of gamers named Franz or Diego able to take up GAME on their offer.

It would be interesting to see what other franchises could feasibly follow a similar pricing scheme – the UK already boasts 9 Lara Crofts and over 200 Gordon Freemans (although disappointingly there isn’t a single person named Cloud Strife or Guybrush Threepwood).

This isn’t the first time a company has used a PR policy involving names – back in 2002 Acclaim offered UK gamers £500 to change their name to Turok in order to promote Turok: Evolution (incredibly 5 people took them up on this offer, although it’s unclear how long they kept their new names).