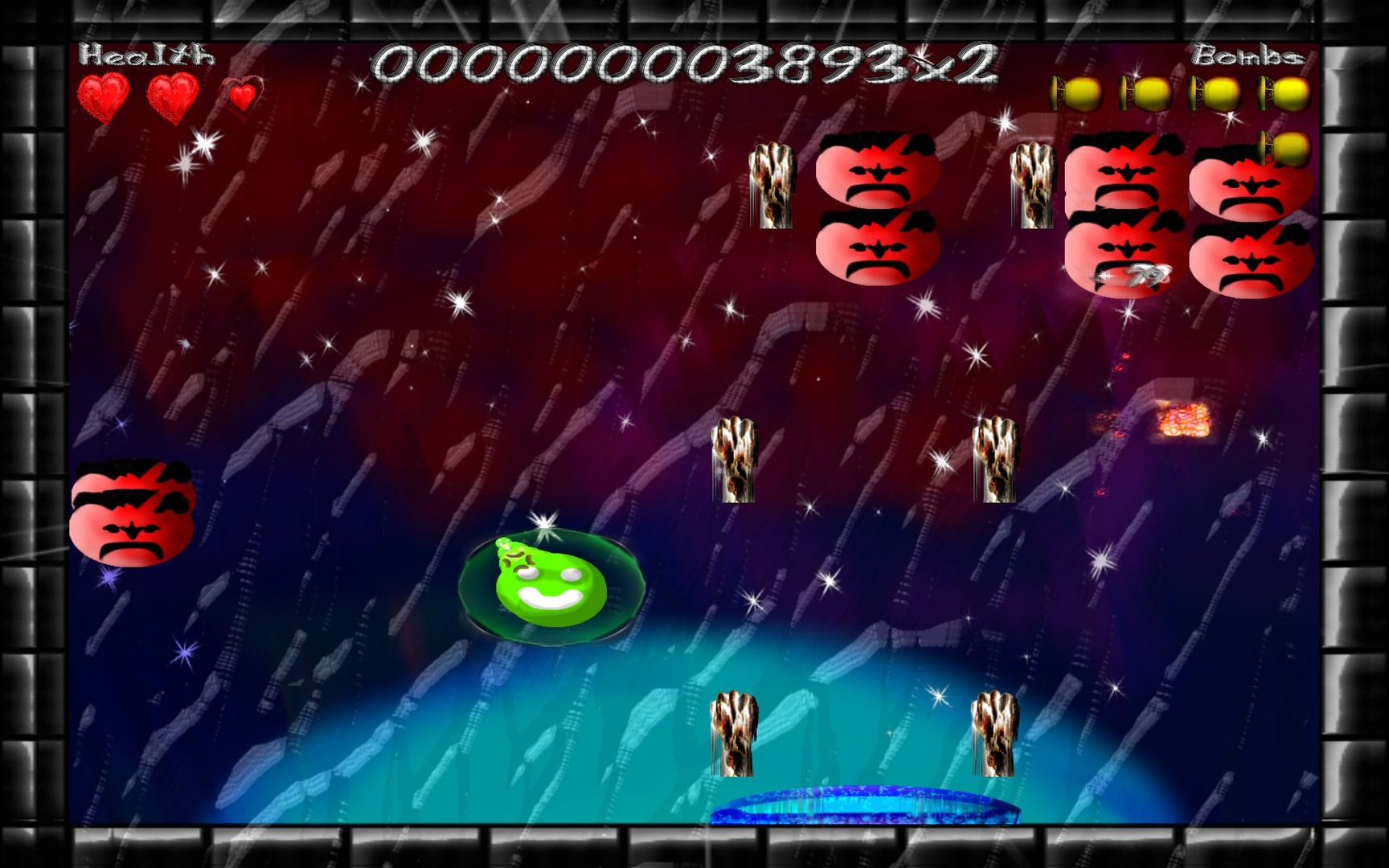 I’ve never taken a hallucinogenic substance, but I imagine that if I did the experience might be a bit like Happy Pong. The trippy arcade shooter was originally created as an Xbox Live Indie game in 2013, although this PC version is more or less the same. A little bit Space Invaders, a little bit Breakout, and a whole lot of psychedelic special effects.

One odd change from the Xbox version is the removal of the opening cut-scene. It was pretty poor anyway but at least provided an attempt at explaining what was going on. Still, all you need to know is that a never-ending stream of angry red faces (campers) are descending down the screen and you need to destroy them. Your ship (grill) can shoot projectiles, rebound green smiley faces and unleash ‘boss’ smart bombs. The game ends when you lose enough lives after your grill is hit by red faces (I believe the campers are ‘trying to get up in your grill’). There are no levels to speak of, just an ever escalating difficulty and the aim of improving your highest score. 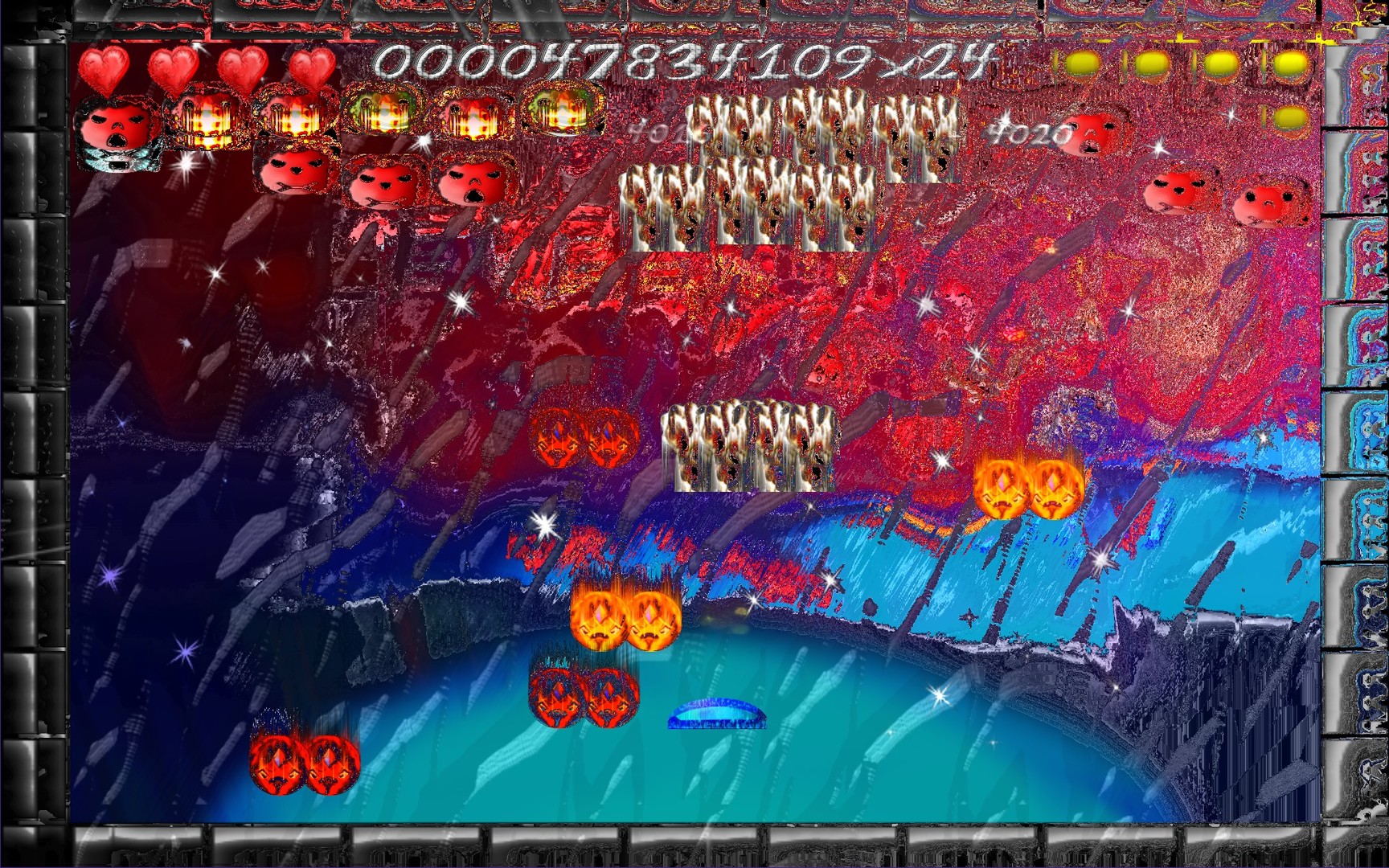 But of course the main talking point of Happy Pong are the ridiculous visuals. The game opens with a warning screen that anyone who has ever suffered from epilepsy should not play the game – and they aren’t kidding. Even the title and menu screens are a garish mess of colours and horrible fonts, and there’s a bewildering number of screens and options to get to before you even get into a game. Once you start however things don’t seem too bad. Enemies slowly descend meaning it’s not too hard to shoot them, while you’ve only got one or two green smileys to concentrate on bouncing back – plus more than enough smart bombs. But things gradually heat up and the screen becomes a mess of enemies and projectiles, further complicated by a number of visual effects. Most of these are various kinds of screen distortions that will build up until you genuinely can’t tell what’s happening. This is a mildly amusing novelty the first couple of times you play, but in the long-run there’s no enjoyment in squinting at a mass of colours and static.

Gameplay also suffers, mainly due to the fact there’s no real feeling of tangibility. A lot of the time you can’t tell if you’re hitting the campers or even if you’re taking damage. Power ups and health upgrades get lost among the on-screen projectiles, to the extent that you’ll just spend most of the time holding down the fire button while aimlessly sliding left and right. There are four different gameplay modes but there’s no real variety among them. (I’d also strongly recommend playing with a controller rather than a mouse if you want to avoid getting cramp in your fingers). The music is slightly less offensive, but the four different ‘styles’ available were pretty forgettable and I can’t really remember even being aware of them while playing. 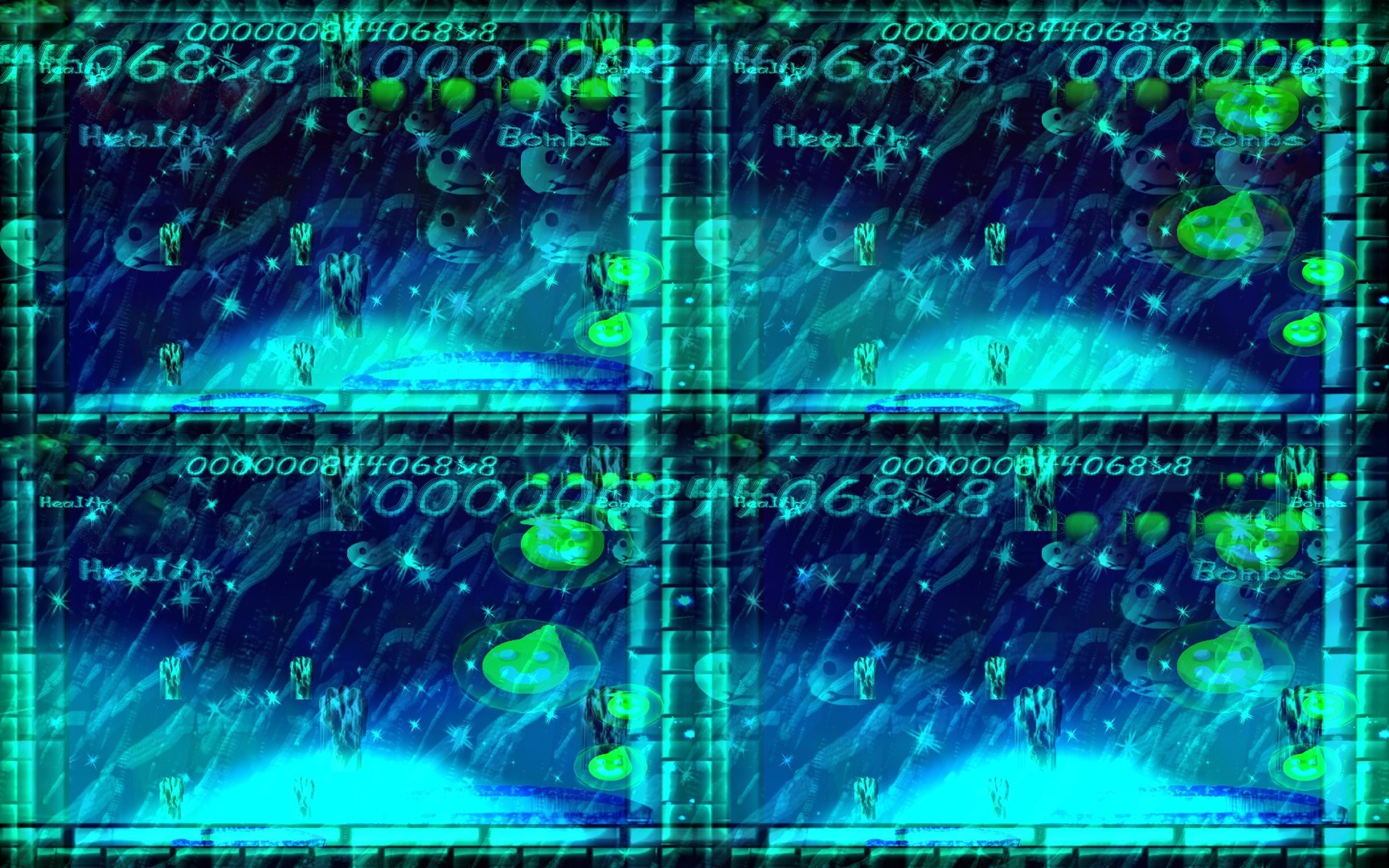 I can honestly say playing Happy Pong is not an enjoyable experience. It’s just an absolute mess to look at (those screenshots are better than 90% of what you’ll see when playing) and whenever the visuals descend into visual diarrhea I would find myself praying for the campers to finish me off so I could stop playing. The worst part is that it actually seems to be aimed at hardcore arcade enthusiasts with the emphasis on high scores and dizzying array of statistics and analysis available for your performances. The fact that after only a few games I was dominating the leaderboards (without even trying) shows it certainly didn’t attract those expert gamers, and is actually a little sad.

Happy Pong is an interesting idea and the sort of concept that would be fun for a few minutes as a free browser game. It’s so visually messy  you almost want to show it off to others, and as an experiment I can almost applaud the developers for creating such a crazy title. But unless you actually want to punish your eyes, or particularly appreciate really bad games, you’ll want to steer well clear.