Home
/
Blog
/
Wolfenstein: The New Order – The Most Overrated Game of the Decade?‏
Share Review 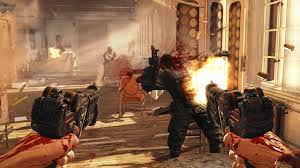 I’ve played Wolfenstein: The New Order, and my God, have I tried to love it. I was informed that the first hour or so was a little dire (which it is), but was assured that it quickly gets better – which it does…..well, kind of anyway. It certainly improves, but the thing is, nobody bothered to tell me how bad it gets later on. It has its moments and, in fairness, it’s certainly far from terrible, but despite noble intentions and a solid narrative, this latest take on the long standing, Wolfenstein franchise is never as good as many would have you believe.

Despite little initial interest (I think that was the case for most gamers), I was won over by the array of glowing reviews and positive player feedback. I have never been a huge Wolfenstein fan, but my love for MachineGames’ previous work on the brilliant, Chronicles of Riddick and The Darkness assured that I was ready to give their latest release a fair crack of the whip.

And a fair crack is what I have given it. I’ve made it through 13 of the 18 chapters and honestly, I’ve had enough – I’m simply not enjoying it anymore. The narrative and storytelling is strong but is in complete contrast to the mechanics while the gameplay, which is initially fun, is starting to grind thanks to collection of surprisingly forgettable weapons and a handful of very poor design choices.

I appreciate that it’s supposed to be a throwback, but the balance required for it to be a success simply isn’t there, and of the ‘old school’ design choices, well, they’re ‘old school’ for a reason. Playing the game on the hard difficulty setting, Wolfenstein veers wildly from surprisingly easy to stupidly, annoying, and more worryingly, unfairly hard.

Initially, I was rather taken with the option to stealth my way through stages, but after a few levels, the sight of yet another enemy conveniently standing with his back to me started to stink of lazy game design. It’s still fun sneaking around and stabbing Nazis, but taking that option only makes the enforced moments of high action later in the game feel even more clunky. 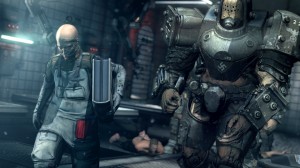 For the longest time, I made my way through without any issues, but around chapter 10, things start to change and the game begins to fall apart. Chapter 12 for instance (or the one on the bloody bridge), is without question, one of the most horribly designed, hateful stages I have ever had the misfortune of playing. It’s around this point that the game starts to throw bullet sponges at you, and it’s here where the fun truly drains away. These armoured enemies can often be dealt with via a bit of sneaking, but as soon as you have to face them head on, the balance is shot. The non-recharging health in particular becomes a major issue. On hard, it only takes a handful of shots to send you to the morgue and by side stepping these hulking beasts, you often find yourself in the sights of grunts ready to mow you down.

It would be fine if you were dealing with these enemies sporadically (as you do earlier in the game), but in the latter stages, these beasts are thrown at you with unnerving regularity and in large numbers to boot – it’s not fun. It might have been more acceptable if the shooting mechanics were top drawer, but even here, while always acceptable, are never in the same league as the genre’s finest.

A lot of gamers have championed Wolfenstein as a grand return to form after years of supposedly terrible, Call of Duty releases, but I tell you what; while the whole modern combat thing might be getting a little tired, from a purely mechanical standpoint, Call of Duty is in a completely different league.

That clearly won’t be a popular opinion as this apparent love for old school shooter mechanics seems to have driven positive word of mouth, but really, do we want to go back to an age of pressing ‘x’ or ‘square’ a million times to pick up health drops and stray bullets? I certainly don’t. People with nostalgia for the early days of FPS’ will sing Wolfenstein’s praises from the rooftops, but if you ask me, interesting premise aside, this is a long way behind the likes of Call of Duty and a country mile behind the likes of Halo. Again, that won’t be a popular opinion, but honestly, that just how I feel.

Regardless of what I say, some will love Wolfenstein’s old school sensibilities, but be warned, despite the initial warm hug of nostalgia, there is a cold slap of poor design, so-so mechanics and middle of the road visuals just around the corner. Even the story, which is often strong, is largely undermined by the fact that, tonally, it belongs to a completely different type of game. The decidedly serious tone often clashes terribly with the big dumb shooter underneath. It’s a strange mix and one that is never reconciled with any level of success. 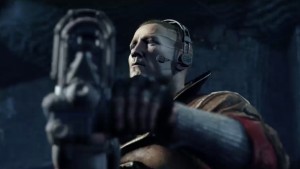 The biggest issue though, the straw that broke my poor camel’s back, is the damned difficulty spikes. I like a challenge as much as the next guy, but the fact of the matter is; Wolfenstein’s difficulty is all over the place. For the most part, Wolfenstein is an easy game on whatever difficulty you play it on, and then all of a sudden…..BAM! A brick wall of lazily crafted difficulty is built directly in your face. Unlike the Dark Souls of this world, the challenge here isn’t organic and the learning curve, however steep, is not steady. It’s a cruise one minute and a nightmare the next, and you know what – that isn’t enjoyable.

I’m sure that an array of snot nosed, supposedly elite gamers will tell me that I’m just rubbish at games, but while I am far from turning pro, I’m not without talent, and for the most part, am more than happy to commit to a proper challenge. My problems arise when that challenge is unfair – as is so often the case here. If you can put up with that, all power to you, but be warned; if you’re not won over by the nostalgia, Wolfenstein: The New Order will most likely prove a largely mediocre and often frustrating experience.