Ok, so I don’t know a great deal about the Senran Kagura series, but what I do know is that it doesn’t take lightly to clothing – in fact, it downright despises it. Of course, it’s easy for Westerners such as myself to take one look at a game like, Senran Kagura Shinovi Versus and dismiss it as a weak excuse for hentai-lite gaming on the go, and while it is to an extent (it certainly doesn’t shy away from the titillation), to dismiss it out of hand would be foolish and largely unfair.

While there is certainly no getting past the fact that Tamsoft’s latest take on the hugely popular manga series is as breast obsessed as ever, it should be noted that, while intentional or not, it is a game and a series that appears fully aware of just how ridiculous the premise is. Whether by design or by happy accident (I’ll be optimistic and lean toward the former), Senran Kagura Shinovi Versus is a game that, thanks to its absurdist tone and overt sexuality, actually manages to avoid falling into the realm of sleaze and instead conveys a sense of sheer ludicrousness instead.

Of course, that is my take on the tone – many will find it simply abhorrent, but come on, are we really going to take this as a genuine representation of female characters within the industry? It’s too silly to take seriously and, while it might not be to your personal tastes, to suggest that it is in any way damaging would be to completely misread the tone. Still, the fact is, this is a game about girls whose clothes fall off during battle and who, in their spare time, go out and buy lingerie together……..jeez, when I put it like that, it seems a lot harder to defend. Anyway, despite their overtly sexualised cutesy demeanours, these girls love a good fight…..and man, don’t they do plenty of it. 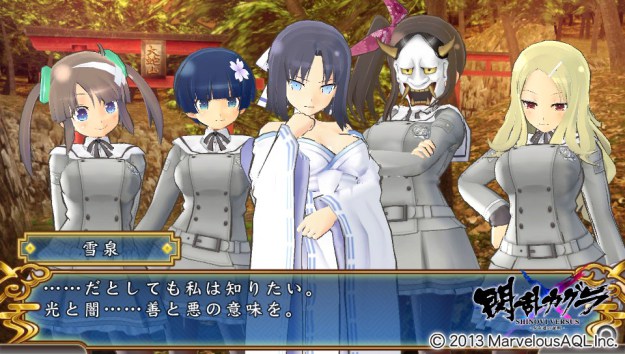 The story involving a rivalry between factions of all female ninja academies is, well, it’s utter nonsense, but for those with no previous knowledge of the series, getting up to speed is relatively simple. Fans of the show though, they will be absolutely spoiled by the huge level of fan service including tons of playable characters and an array of cool little nods to the manga and anime.

Beyond the fan service, absurd story and bouncing lady bits though is a competent and very decent looking brawler in the vein of Koei Tecmo’s Dynasty Warriors series. Simple on the surface, but like the Warrior series, home to its fair share of depth. Senran Kagura Shinovi Versus isn’t quite as polished or slick as recent Warriors releases, but it is a solid brawler in its own right, and thanks to its ludicrous premise, does at least stand out from the crowd.

A slightly wonky camera does let the game down somewhat, but despite the camera going walkabout and a few too many loading screens for my tastes, this is a technically impressive and largely enjoyable brawler. Basic combos will be repeated en masse, but dealing with the crowds will take a bit of finesse while the ability to play as any number of characters does keep the game feeling relatively fresh. Early stages and standard difficulty allow you to plough through the majority of enemies via very basic combos, but like the finest games of this very Japanese sub-genre, higher difficulty and latter stages require a much more nuanced and tactical approach. The control scheme remains basic throughout, but picking your battles carefully becomes an increasingly important aspect of gameplay. 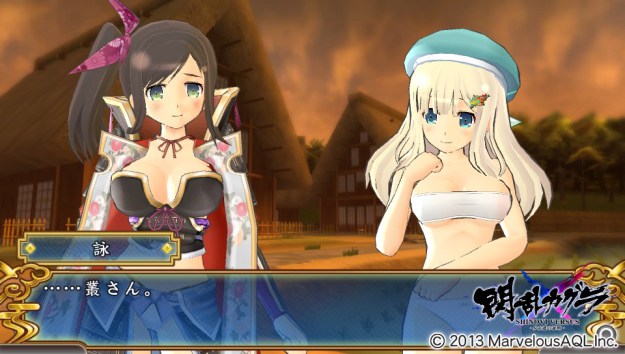 While none of the girls play in a particularly unique manner, their special moves do at least help them stand out from the crowd with the clothing system giving the game something of a unique *ahem* flavour.  While the aesthetics obviously play a major part in the design of the game, the inclusion of specific outfits is not used exclusively to show off the cast via a collection of extreme , morally questionable close-ups (although it is very much about that). The clothing system also allows for different tactical approaches with outfits linked to offensive, defensive and balanced character abilities. Of course, there are a whole bunch of items that are purely aesthetic, but at least it does play a part within the core mechanics of the experience rather than being 100% voyeuristic.

Beyond the lengthy single player campaign, Senran Kagura Shinovi Versus is also home to a co-op multiplayer mode, but at the time of writing, I for one had murder getting a game on the go. The fundamentals seem sound enough, but finding a game is tricky, and finding one that runs smoothly appears almost impossible……I’d stick with single player to be honest.

With its varied location, huge cast of playable characters, solid combat and wealth of fan service, Senran Kagura Shinovi Versus certainly has more going for it than you might initially assume. Yes, it is almost outrageously explicit at times, but it wears its sexuality on its sleeve and at least appears to be aware of just how ridiculous it really is. More silly than sleazy, Senran Kagura Shinovi Versus is a game that will prove inevitably polarising, but get over (or get on board) with its unique aesthetic styling and you’ll be treated to a quirky brawler that overcomes it flaws to deliver a light but ultimately entertaining piece of on the go gaming.