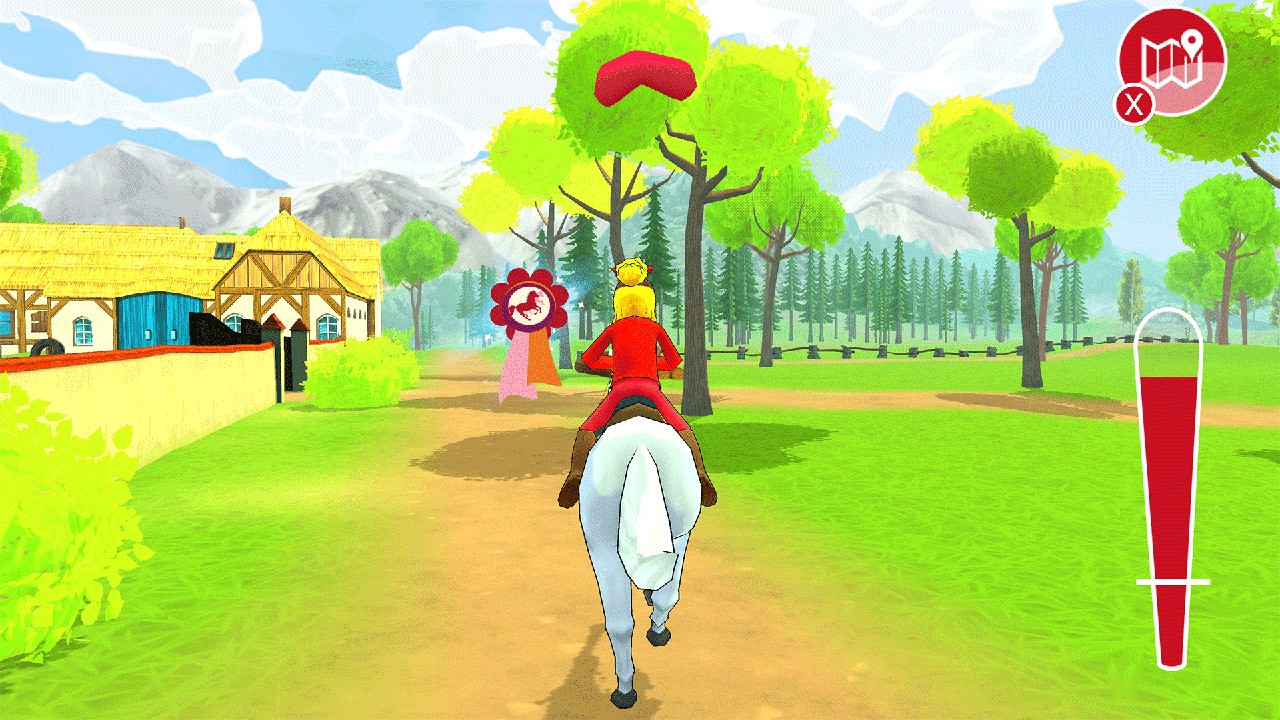 Some games are not for me. This is a simple, fundamental truth in the universe. People probably get tired of hearing the same yarn about mobile gaming on the Switch, or notice that I rarely, if ever, touch sports games, or that I keep putting weird anime titles on my console. That’s cool, we’re all into different things. But some games are so far outside my scope of interest that it’s astonishing they exist, yet it makes perfect sense. I have worn many hats in my life: son, husband, father, teacher, plaintiff, defendant, store clerk. Still, in all my years, I have never been a young German girl. For those reasons, I think that my review of Bibi & Tina: Adventures With Horses might be slightly skewed, so please take that with a grain of salt as we move forward. Then again, if you’re morbidly curious how we got here, buckle up, because it’s a strange and wild ride.

Bibi Blocksberg is a young witch who happens to also live in Germany. This is important because I had no idea this was the case, and was very, VERY confused to boot up the game and be greeted with a live action trailer for a movie I’d never heard of before, completely in German with English subtitles. So Bibi goes to this horse farm and meets a frenemy named Tina, whom she shortly becomes real friends with. There’s this horse named Socks that everyone likes, but then there’s this evil rich dude named Crabman who wants the horse. For…I dunno, racing? Dog food? A companion? Anyways, he’s evil in that kids movie sort of way (menacing smile, rich without altruism, slips on various traps) and we can’t let him have the horse. The only way to keep Socks on the horse farm is to win in the big riding competition coming up, and we gotta do it without magic! There’s no reason why, as far as I can tell. Bibi turns people into other things during the trailer, but I guess we can’t just magic Crabman into an actual crab or something. So let’s bust out the saddles and ride for Socks’ freedom! 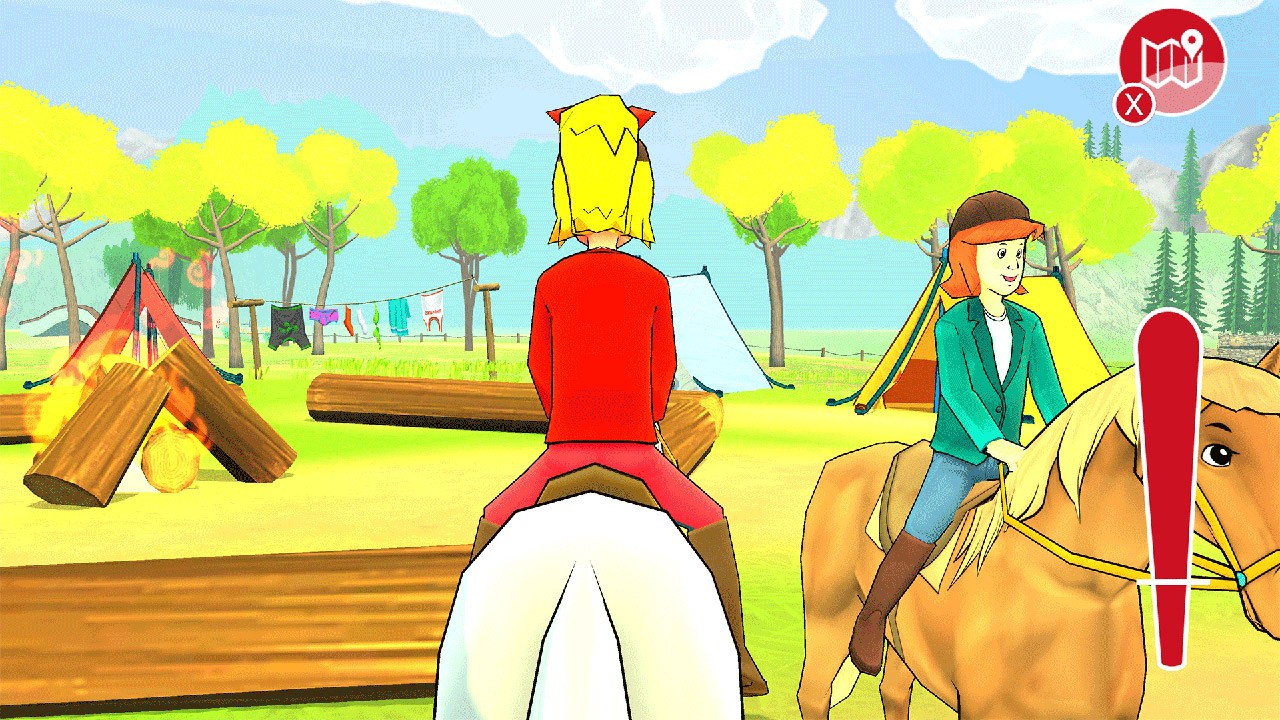 The main purpose of Bibi & Tina is to race horses. You have three ways of doing this: there’s the main “quest” mode, in which your build up your riding prowess by achieving goals set across several stages; the time trial mode, where you try and get through the courses in a set amount of time; and the free ride, where you get to explore different areas and find secrets, and you unlock some paltry reward (artwork) if you find them all during those scenes. You can ride as Bibi or Tina, and it doesn’t make a lick of difference in either case because, again, Bibi isn’t doing magic here. You just ride the horse, and you occasionally urge it forward with the A button while keeping an eye on a meter on the right side. The horse will go faster as long as you push the button, but you can’t let the meter dip below the line or the horse gets angry and stops altogether. You gotta be nice to the horse and treat it well, because horses are people and all that jazz.

I took some time to try and figure out this game from the source material, and I just got even more confused and lost. Bibi Blocksberg was a radio drama in Germany back in the 1980s, which is a weird place for anything to start but hey, let’s go with it. The show was mostly successful, and plays out the way you would imagine: Bibi has fun with her friends, magic happens, and then we learn a valuable lesson about not using magic to cause mischief and also not to be a dick. This was successful enough to turn into an animated series in 1995, and the animation got an English dub in 2003. Notice the huge gaps in time inbetween these different events: that might make you suspicious, but read on, it gets weirder. Bibi & Tina was the first of the live action movies that was made for Bibi Blocksberg, and there have been four, and they’re all German. The movie upon which this game is based was released in 2014. Let that sink in for a moment. This is a game about a movie that was released almost five years ago. There is no sequel in sight, and, even if there was, why in hell are we promoting it starting with the first movie? Why not make a game about this new, upcoming movie, or at least the latest movie, which has a whole series of events regarding child marriage, the US political climate and cultural music clashes? I’m serious, I got so in the weeds with Bibi Blocksberg to try and explain this very, very mediocre game.

First and foremost, Bibi & Tina doesn’t look great. After the live action trailer and using plenty of movie stills for the menu and the loading screen, you might be shocked by how retro and poor the game itself looks. You’ve got little more than a wireframe of your character sitting on a horse, and you rarely see your own face, only the back of a girl and a horse’s posterior. Seeing the face was a bit of a confusion: you clearly are a cartoon character, which, upon further inspection, is what the girls looked like in the 90’s animation. Also, there are OTHER Bibi & Tina games, which are based on the cartoon, so this game feels like an afterthought that was tacked on for a further cash grab to recycle some of the resources they had lying around. The landscape, which fluctuates from “horse ranch” to “mountains outside of a horse ranch” are alright, but they honestly look super simple and merely as filler. The trees are clearly trees, but there’s nothing majestic or even naturally pretty about the design to make you interested in trotting around or admiring the game as you play. You simply exist here, and the best compliment that I can give is that you never feel like you’re lost or are unsure about where you are or what you’re doing. The sky, ground, horizon and different objects are cleanly, clearly defined. When I ran into a wall, it was obviously a wall, and that was that.

The horses handle well enough in Bibi & Tina, which is good given that it’s 99.9% of the game. You move your horse around by pointing it in one direction or another, you mash the A button to make it go faster, and, since it’s a kid’s game, you’re not in danger of Red Dead Redemption mode making you fall into a chasm, getting bucked free and losing health, or needing to shoot your horse at any point. Instead, you just move forward, and the horse nickers and protests if you run, full speed, into a canyon wall or a tree. The horse also has this concept of a jump mechanic, but it’s incredibly touch and go. You need to hit this sweet spot of speed to jump, and you will merely walk into a fence if you’re not fast enough, delaying you mighty (and possibly costing you victory in a race). In the same breath, you have to be careful if you’re running parallel to a jumpable obstacle: a couple of times, my horse took the wrong cue and jumped over a fence that I did not need him to jump, and thus threw me off my game something fierce. At which point I quit and restarted the race, because why am I going to punish myself and try and salvage the race? 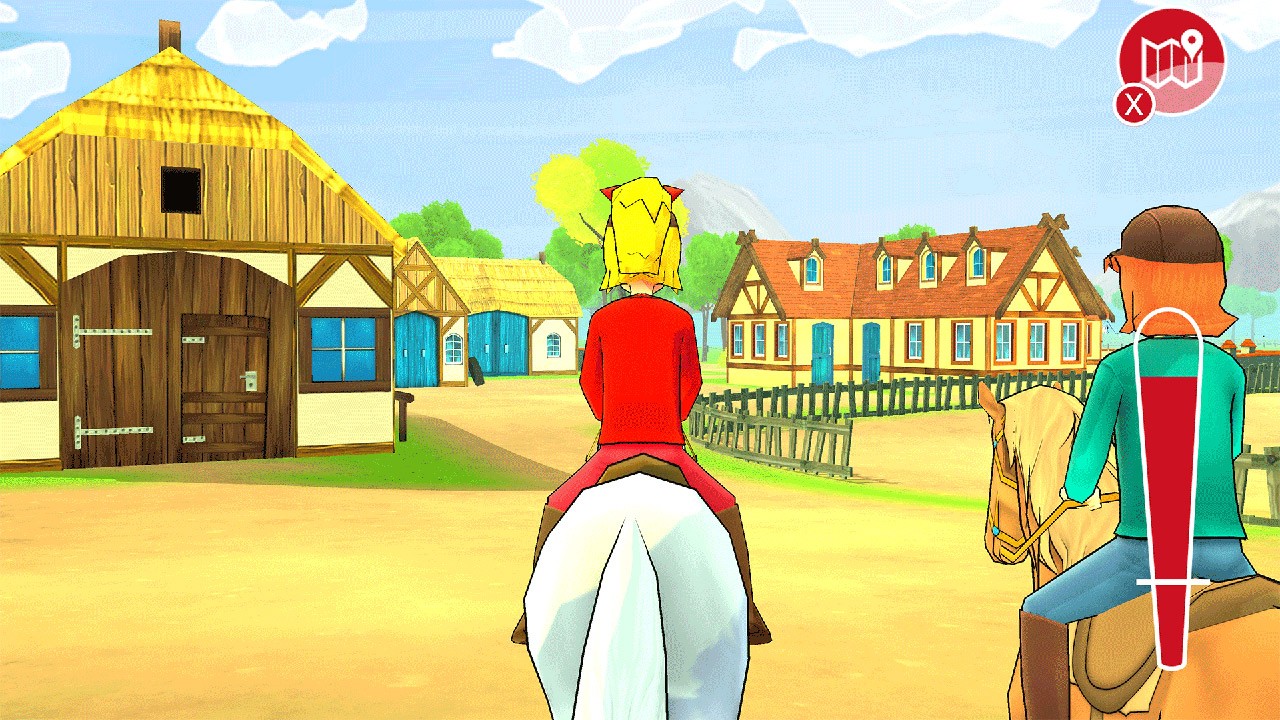 As someone with no connection to the characters or the story (previously), the biggest obstacle for Bibi & Tina was realizing there was no meat for me to sink my teeth into. There isn’t a grand soundtrack or amazing replay value: there’s no score other than “pass” or “fail” for a majority of the stages. I wasn’t deadset on trying to unlock movie stills or just grooming the horses that I had, and the whole thing got incredibly boring fast. Worst of all, I realized that the other Bibi games (there are two others!) have a significantly higher value in terms of unlockable characters and rides, leaving Adventures with Horses as the odd man out in the game trilogy. I think, had the design been more motion capture or something a bit more “realistic,” it could have had a position in the set, but it just seems like they took the other game (At the Horse Farm), stripped out the fun stuff and put in the movie trailer to get people to go find it on Netflix or the German version of Blockbuster. It’s that level of “movie game” that I haven’t seen in decades, and it was almost nostalgic with how obvious the whole thing was.

Unless you’re a Bibi Blocksberg fanatic or obsessed with spending near-premium prices on games that aren’t worth it, Bibi & Tina: Adventures with Horses is a massive waste of everyone’s time and money. Not just because it’s not particularly fun or exciting, but because it’s not even the best Bibi Blocksberg game. Could be worth a laugh at a significant discount, but not even the right spell could convince me to give this game another ride.

Bibi & Tina: Adventures with Horses is a massive waste of everyone’s time and money.