At the start of Juju two cute little characters (Juju & Peyo) are playing a game (not a platformer) when a friendly but wise bear (Jambee who happens to be Juju’s father) passes by. The two little characters start following the bear hiding out of the bears view. The bear sticks it staff into something and the whole scene changes. A bird appears and needs help, so Jambee follows the bird into the forest leaving his staff behind. Obviously being curious little characters Juju & Peyo start playing with the staff. However they mess around too much and unleash an ancient spirit! Jambee is captured but before he is taken away he manages to pass on a magical mask to Juju.

Juju is a platformer of the classical kind. Following in the same vein as Sonic, Mario, Crash Bandicoot and Rayman, Juju gives you the opportunity to cross four worlds full of colour covering various stages that include a jungle stage, toy land stage, dessert stage and a tropical pool stage. You’ll notice straightaway that Juju contains vibrant levels full of cute characters and enemies, it’s obviously aimed at the younger market. The main mission for Juju is to gather mystic keys and magic embers to save the day. You’ll have to complete about 8 stages per world as you make your way through. You have to collect gems along the way and you’ll also have to jump on or over a variety of enemies. As you progress you unlock further skills to help you with your mission. The pace of the game is badly affected by one of your skills i.e. when you have to stop to play the drums, it’s not just repetitive but also frustratingly long to do. Juju is meant to be a fast paced platformer but this skill is too slow to utilise as much as you’re meant to.

As you navigate through each world they become more interesting and vibrant to begin with, but it does feel very samey once you start playing the fourth or fifth stage on a world. The enemies whilst different looking on each stage are fairly one dimensional and repetitive. The boss enemies range from towering robots to giant sea creatures, these are less repetitive to battle with but like most things within Juju they’re too easy to beat. There seems to be an issue with the collision detection, often you’ll find Juju jumping with clear air between you and the enemy but still getting hit. Not too much of an issue if you have full health but annoying if you’re near the end and it happens although there are lots of checkpoints. 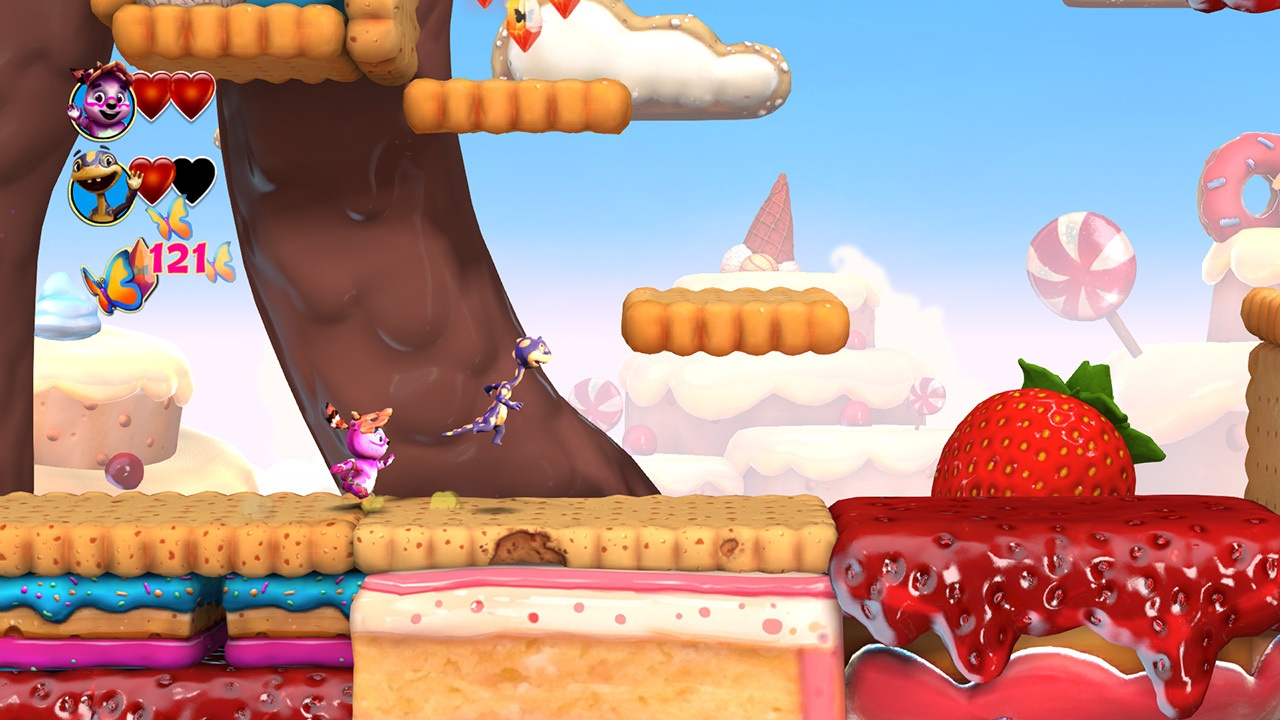 There is a Co-op mode where a second character can enter the fray. Juju does become better when there is two of you as you’re able to gain more gems and work together in clearing bonus stages. The only problem is when one of the characters falls behind too far, the camera won’t zoom out the second character just disappears off screen.

Juju is a game aimed at the younger generation. Whilst that is something that shouldn’t be held against it, there’s a reason why the gaming fraternity has moved on from the old Mario/Sonic games of yesteryear. There’s very little in innovation but Juju is a fun game with very vibrant colours which help the whole experience. If you want to get your kids into gaming then Juju is a decent option but for everyone else Juju is a simple game that is simply bettered by the likes of Mario/Sonic. There is room for a new platform character out there to carry the torch much like Sonic, Mario, Crash Bandicoot and Rayman have but Juju unfortunately doesn’t have what it takes to take on such a responsibility.