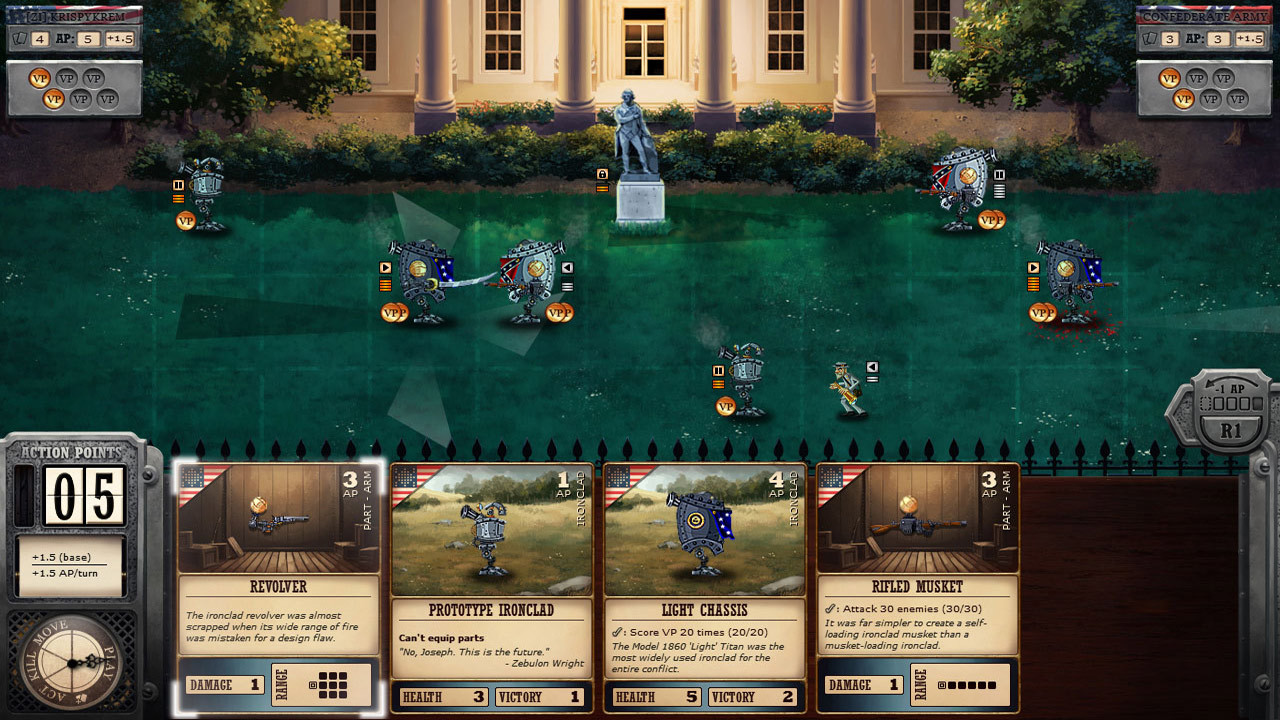 Welcome to an alternative history American Civil War, a world where wars take place on battlefields full of cards and side scrolling enemies. Ironclad Tactics is an interesting attempt at merging the card playing and tower defence genres into one strategy card fest where the story is told via a series of comic book style frames.

The story of Ironclad Tactics follows two engineer friends Maxwell and Joseph. Played out through comic cut scenes Ironclad Tactics takes place in just before the beginning of the American Civil War. You learn that the Bureau of Steam Engineering has created a robot known as an ‘Ironclad’. At the same time you discover that the Confederate states have also started building their own robot soldiers led by an unknown leader. Maxwell and Joseph are afraid that the technology will cause devastation across America so they set out to bring peace to the land. To be fair to Ironclad Tactics, the story runs smoothly and the comic strip layout works well, the plot is mildly interesting and their a few laughs in between the various levels. It’s a shame there is no voice acting as it would have helped you care a bit more about the story.

As you complete each level you slowly move from one side of America to the other. The battles take place on a grid like system, something similar you may have seen with Plants vs Zombies. The main idea is to get your troops from one side of the screen to the other, the enemy also has the same instructions. If you get the set number of your troops to the other side before the enemy does then you win and progress through to the next level. 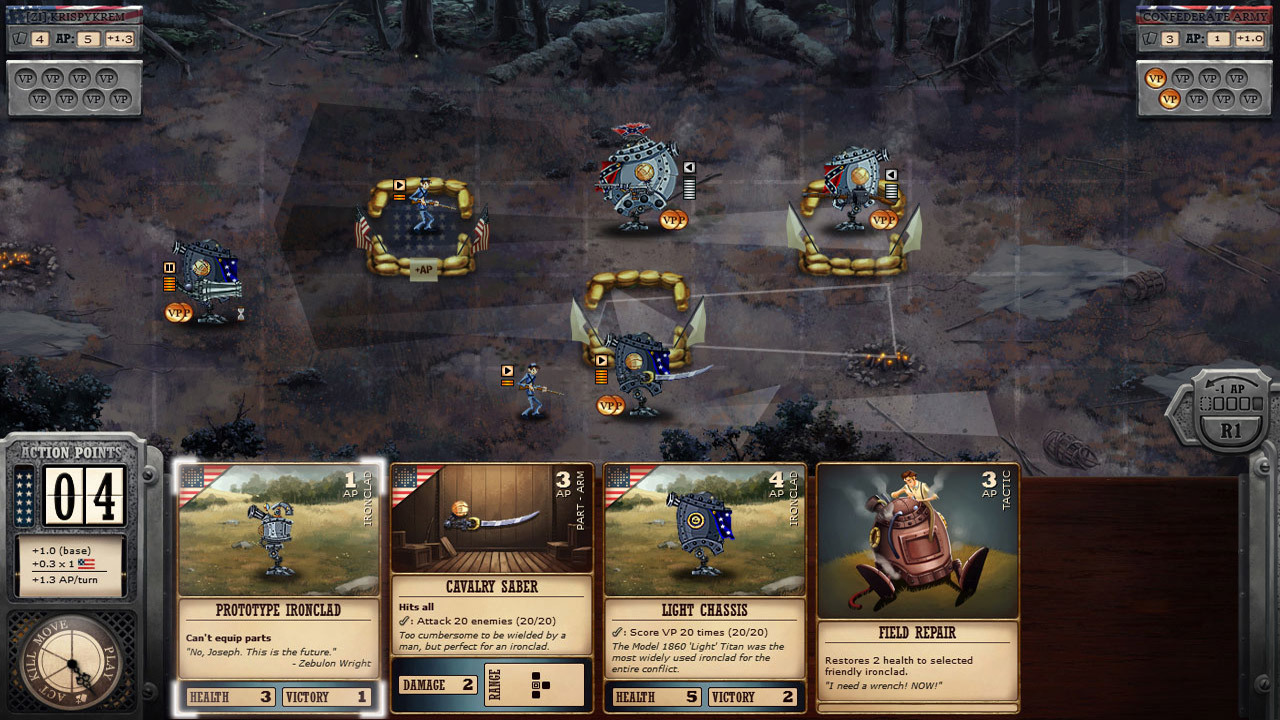 Taking it to an increased level of strategy the cards you possess contain troops and power ups which will help you get across. So the general process is to put one of your troops on the field, equip them accordingly i.e. Dragon gun and see them move across the grid. Your troops will automatically move across the grid unless stopped either by you or an obstacle, for example a rock or enemy unit. You troops will draw fire on the enemy and you just need to make sure your unit doesn’t get destroyed otherwise it’s a waste of a card. Ironclad Tactics plays on this concept throughout, so If you don’t enjoy the first few levels you won’t enjoy the rest of them. Ironclad Tactics moves at a reasonable pace, the idea is interesting to begin with but there’s really not a lot going on besides using cards.

Just like other card games, you have an initial deck where you can edit which cards are present. So you need to take the time to plan ahead. As you complete a level you are awarded with new cards to include in your deck. The cards themselves are reasonably portrayed, there will be no awards for artistic direction, they’re simple looking cards that for the most part clearly detail what the card does. If you haven’t of guessed Ironclad Tactics is turn based, you play a card then your opponent plays a card. Each card uses up a certain number of points so again some preplanning is required i.e. don’t play a card that takes so many points of you that you can’t play a certain card in your next turn.

There are a lot cards to be collected, there are some rare cards to discover depending if you achieve a special level set target. Selecting cards is an easy process, navigating through Ironclad Tactics is fairly straightforward but there is a lack of a tutorial, you will at times find yourself spending too much time trying to figure out how a new card works or how something on the battlefield can be used or defending against. You will often start a new level with zero idea on what your opponent has, you could argue that makes Ironclad Tactics more interesting but it makes it a unfairly challenging game at times. 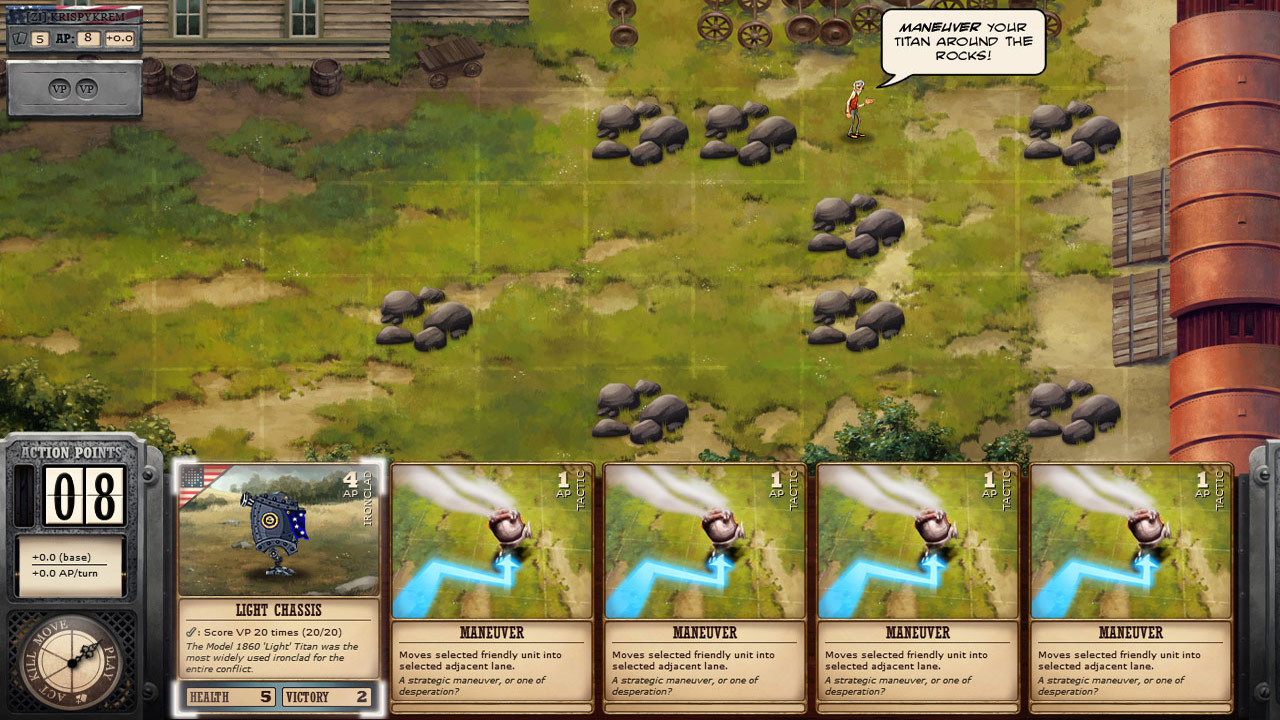 Presentation wise Ironclad Tactics lacks a fair bit, the cards are simple looking, the battlefields are fairly bland, the menus are basic and musically there isn’t lot to hear as such. Multiplayer wise like most games it’s much more fun to play against human opponents whether it’s co-op or online, thankfully these modes allow you to unlock special cards if you win.

Ironclad Tactics is a simple yet effective game. If you like card playing games or tower defence titles then there is some fun to be had with Ironclad Tactics. It doesn’t have much going for it in terms of looks but their is a fair bit of depth if you’re willing to play right through. It’s a niche market Ironclad Tactics is aimed at but if you fancy playing something different you may get a few hours of fun out of it.