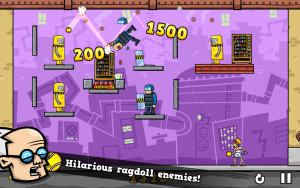 “If ain’t not broke, don’t fix it”. It’s hardly an inspiring mantra, but one that I can imagine is used on a regular basis at Finnish developer, 10tons. After the humble success of the simplistic but ultimately rather addictive, King Oddball, 10tons have essentially gone back to the well for the tonally very different but conceptually very (very) similar, Tennis in the Face.

It might not be as artistically bizarre as their previous outing, but structurally, Tennis in the Face shows a company willing to stick with what works – and what works are smartphone-esque physic-based puzzlers that try to capture the same kind of one-more-go magic that has catapulted Angry Birds to such stratospheric levels of success.

While Tennis in the Face isn’t quite as similar to Rovio’s infamous money-spinner as their last release, it is still based primarily upon quick-fire stages and simplistic but addictive gameplay. It also shares its predecessors basic grid system and general layout, thus giving the game the look of an unofficial sequel……or of 10tons being a decidedly lazy collection of video game auteurs.  Whatever the case may be, like King Oddball, Tennis in the Face is an entertaining if short lived experience that really would feel more at home on a smartphone but one that, thanks to its fundamentally strong gameplay, is still enjoyable when experienced on PS4.

Playing as the beautifully mulletted, Pete Pagassi, an ex-pro tennis star shamed by his addiction to the energy drink, Explodz, you are tasked with reclaiming his pride and ridding the city of the dangerously addictive energy drink by, well, smashing anyone involved with the product in the face….you know, with tennis. 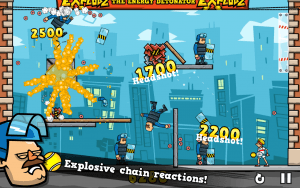 By aiming your serve via the control stick or touch pad (why anyone would use the touch pad is beyond me), you are required to take down a number of pro-Explodz (enemies?) in as few shots as possible. As is often the case in a game of this ilk, taking down every character within a single stage isn’t especially taxing, but to do so in few enough shots to warrant a gold crown for the stage is often a much trickier proposition.

Whether it be clowns, armed police, hipsters or Explodz engineers, the aim is always the same with the difference usually linked to how many hits a specific character will take before they go down. Some need to be hit twice, others from a particular angle – the differences (outside of the obvious visual ones) are minimal, but they do just enough to keep the game feeling somewhat unique as your progress though its aesthetically very similar stages.

What really keeps the game ticking along though are the environmental obstacles that become more prevalent as you progress through the game. From windows and exploding barrels to vending machines and ball dispensers (both of which also explode), Tennis in the Face becomes more interesting the deeper you get but ultimately doesn’t do quite enough to stave off the inevitable sense that you’ve seen just about everything the game has to offer after the first few stages. In fairness, there is quite a bit of content for those enamoured by its simplistic charms, but for most, this will offer little more than a brief, but ultimately pleasant distraction. 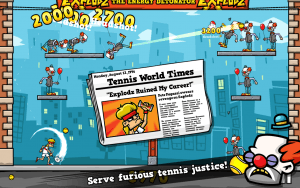 Like 10tons previous offering, King Oddball, Tennis in the Face is an enjoyable slice of physic-based puzzling with just enough about it to justify its place on the PS4. It will inevitably feel more at home on smartphones, but with its limited but likeable art style, basic but addictive gameplay and wealth of repetitive but strangely compelling content, Tennis in the Face represents yet another solid entry into their growing collection of low priced oddities. Unlikely to be remembered once you’ve played it, Tennis in the Face will nonetheless be enjoyed while you are.