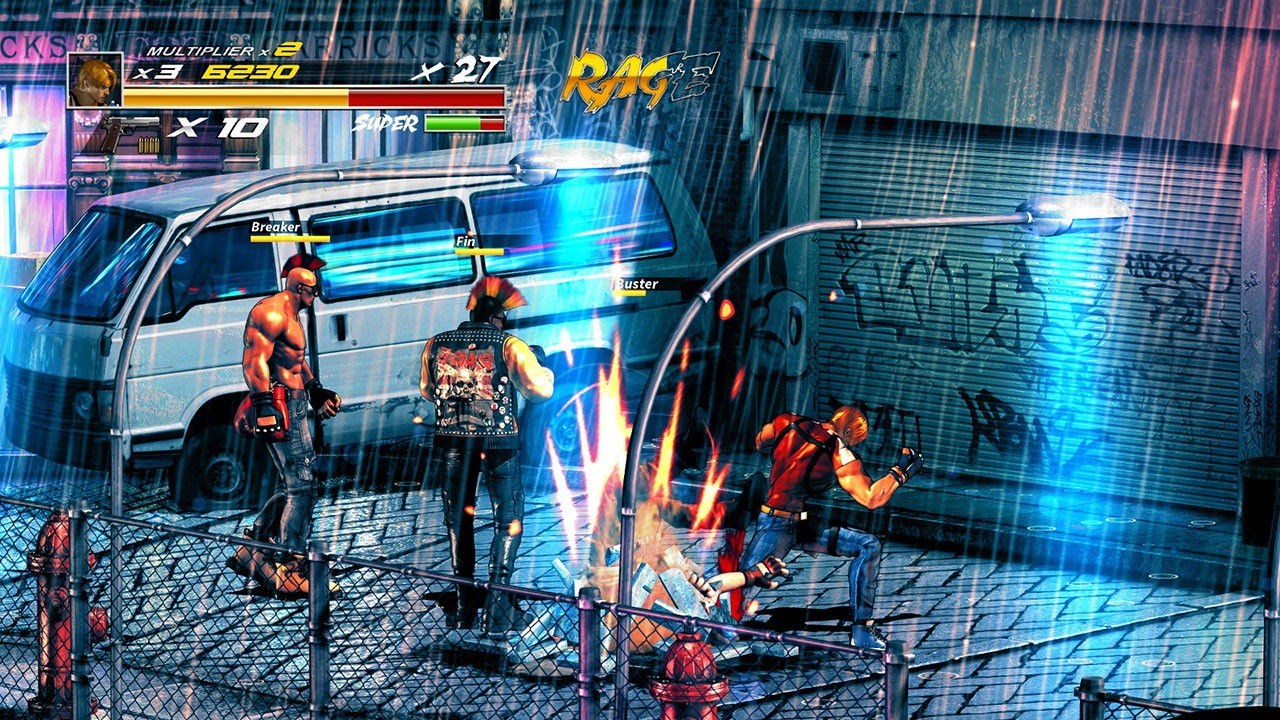 When I was growing up, I had a few video games to choose from in my household, and I consider myself lucky for it. For many kids in my class, they would have maybe one or two, if any at all, and the fact that I had a few to trade around and let others borrow made me feel pretty special. The launch year of the SNES, there wasn’t a ton to choose from: I still think Pit Fighter is the reason that I’m not as into arcade ports as I’d like to be. But I did play the hell out of the SNES version of Final Fight, because, frankly, it was fun as hell. You got to jump into one of three dude roles, beat the hell outta baddies, and look cool while doing it. I had no idea, at that time, that the port was so changed and stripped and censored compared to the original (look it up sometime, the changes are wild), but I still walked away from it enjoying brawlers. Years later, I now have a portable machine that I carry everywhere I go, and it carries some of the best modern and classic brawlers on it (still rocking that arcade version of Bad Dudes vs DragonNinja), and I am at peace. Occasionally, there are new contenders, and they must be weighed and measured. Pelikan13 and DanGen Entertainment have brought The TakeOver to the Switch, and we have found it to be worthy, but certainly not perfect.

The TakeOver does nothing to try and hide it’s roots of homage and tribute to the classic fighting games, and I applaud them for leaning so heavily into it. Years ago, when Kung Fury was released to the absolute joy of everyone, it showed that taking tropes and going as hard as possible with them could be better than just lightly touching upon the ideas. You’re thrust into the world of Steel Haven, a town that’s always had a normal metropolitan crime problem, but has suddenly seen an uptick as the crime units have gotten organized. You’re one of the good guys in a city full of bad guys, where the cops are doing their best and living like superheroes against a constant onslaught of crime. But when their adopted daughter Vanessa is kidnapped, supercops Ethan and Megan, along with their ex-military friend Connor, all decide that enough is enough. There’s no time to waste with opening an investigation and following proper protocol, or waiting the usual 24 hours to see if this was just a hoax: it’s time to get into the streets, down the alleys, out onto rooftops and even off to exotic locales to get her back and prove that this is not a place for crime to thrive. It’s time to take it all back; it’s time to stop The Takeover. 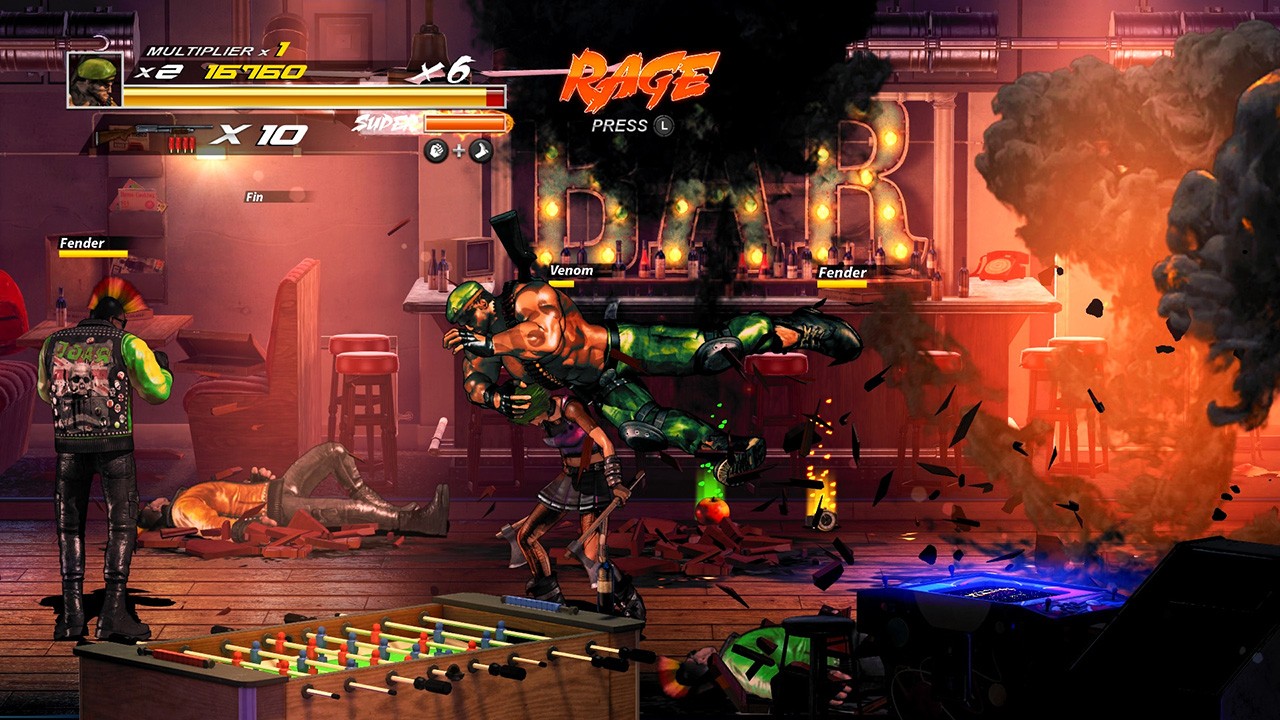 The heart and soul of The Takeover, despite what the description might say, is not the soundtrack. Don’t get me wrong: the soundtrack is pretty solid, and it certainly matched the mood front to back with all the different vistas where headpounding was going on. But whoever was in charge of promoting this game really seemed to have no faith in revealing anything about the gameplay mechanics or the incredibly trope-filled presentation, which is significantly more impressive. Before anything else, feel free to listen to the soundtrack and enjoy it, but don’t feel like you need to hang your hat on whether you like the music or not, because it represents a small fraction of what’s amazing about this game, and I was shocked that the Nintendo Switch page for this game says NOTHING about the actual meat and only talks of the soundtrack. Bad call, seriously.

In fact, The Takeover does something impressive with fighting mechanics: they make them interesting again. When the game begins, there are plenty of basic things that you need to pick up, and they all come naturally. You jump, you’ve got a punch, you’ve got a kick, and you’ve got a superpowered move that can help clear the air a bit at the expense of some of your health. Unlike Streets of Rage 4, though, your health won’t just come back if you’re a relentless machine, so be careful not to overuse it, because you will open yourself up to a cheap KO. Grappling is how to survive in solo mode, so get used to not having a button to initiate holds, just walk into an enemy. Once you have them in your clutches, it’s all about directions and buttons: you can slam them locally, you can hit them a few times before letting them go, or, most importantly, you can hurl them across the screen, which you should always, always do. Nine times out of ten throwing an enemy will be immensely more beneficial than just holding and hitting them. Not only will you get them out of your immediate vicinity, but there’s a strong likelihood that you’ll hit another mob in the process, which does significantly more damage to all parties involved than just hitting them. Naturally, there are all different ways to approach this game, but I highly, highly recommend grappling all day, every day.

If grappling isn’t your thing, don’t worry: there are plenty of other options, some of which never occurred to me in a brawler. The TakeOver makes sure you have weapon drops from crates, from crowbars to freaking katanas, and you can swing or throw them. You’ve got a Super move that gradually charges up, uses no additional points and inexplicably fills the screen with missiles as you punch, doing some room clearing damage while also looking badass. You’ve got your RAGE meter that gradually fills through the course of fighting, and triggering RAGE makes the screen go red, some heavy metal riffs start, and allows you to do massive damage and take almost none until the mist of anger finally clears. One thing I especially loved is that you’re cops and military and, as a result, you didn’t just go on this rampage of justice with your bare hands. Each and every character is sporting a gun, and, as long as you have ammo, you can draw it and shoot at baddies to do decent damage and keep them at bay. It’s just such a natural thing, I can’t believe I don’t see it in more beat-em-ups. Yea, sure, you’re super muscular and have bubbling fury, but the bad guys all have guns, why don’t you carry one and find ammo on occasion? Brilliant. 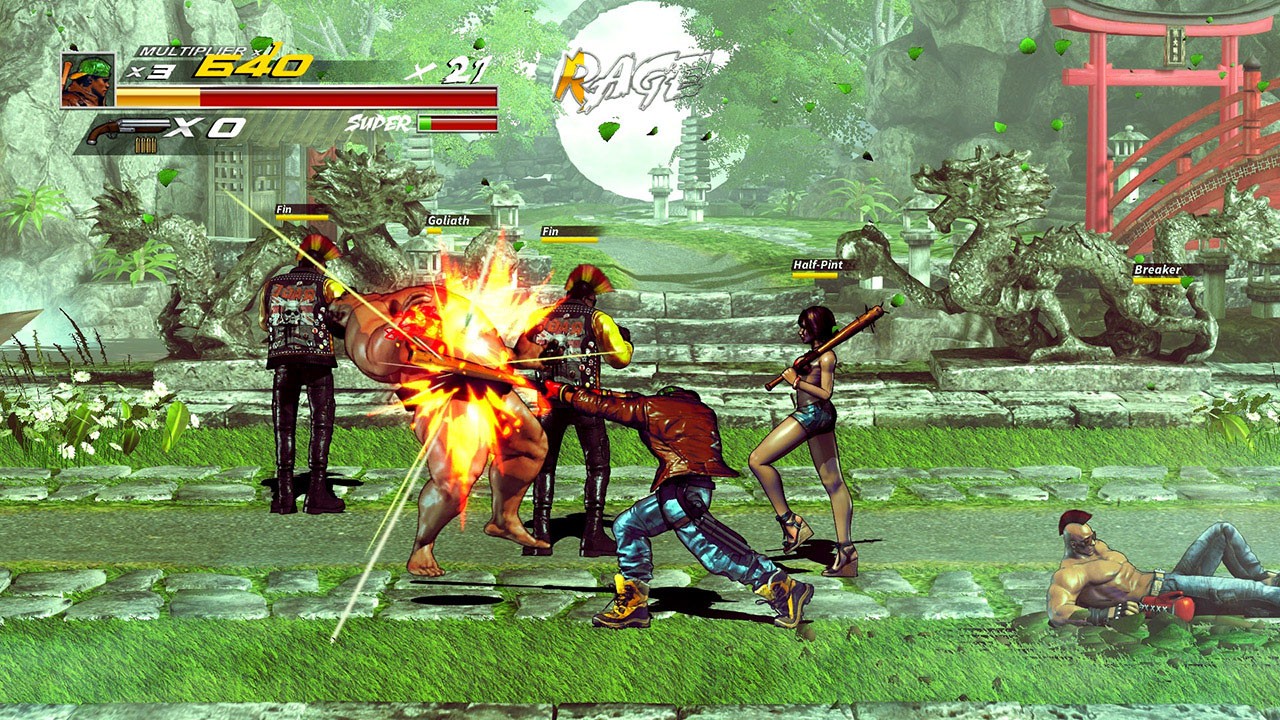 When the TakeOver starts, frankly, I was underwhelmed. You get this cool comic-book style introduction to Vanessa’s kidnapping, complete with appearing sound effect writing like it’s a damn episode of Jojo, and then you just go straight into some pretty standard fisticuffs with characters who, initially, didn’t look great. Ethan, Megan and Connor all have this blend of pre-rendered CGI body types combined with moving a bit stiffly around a very large stage that may or may not be larger than you anticipate. It’s sometimes hard to gauge the depth of field for where you can move, exactly, and the destructive nature of some, but not all, of the scenery can put you in a bit of a distortion perspective. You got some pretty standard mobs, and they change skins but they don’t really change tact as you move forward. Muscular dudes who want to punch and kick you. Women with weapons who don’t actually drop those weapons on death, much to my disappointment. Dudes with knives and furious strikes, gun thugs with motorcycle helmets…you know, fighting game characters. You just sort of get into it, and you might feel a bit frustrated at first. After the fluid nature of Streets of Rage 4, The Takeover doesn’t feel retro in movement: it feels archaic.

As you adjust to the controls and the speed, however, you start to appreciate how well the game is made, and the polish added to the homage mentality. So many enemies drop grenades and explosives on death, forcing you to use the dash and roll mechanics to help you move quicker (and you have until the second boss to get good at rolling or you’re totally toast). We graduate from hazards like rolling barrels coming from nowhere to biker gangs, being chased by a bulldozer slowly through some tunnels, and even needing to dodge freaking lightning. Every boss needs to have some kind of stupid, quippy agenda of their own while also remaining loyal to a faceless mega boss, and you relish in the banter and the comic book cutscenes that help fill in the gaps as you move from the city to a ship to some kind of exotic island locale, and it all melds together nicely as you further and further yourself from reason and logic. There’s some banger mini-missions between levels where you drop the fighting game pretence all together and end up in a car chase game and, my personal favorite, piloting a fighter jet, because why not. There’s complexity and excitement in figuring out new ways to dole out punishment, especially when you can punch a rack of propane tanks and head for the hills before setting off massive explosions. The only thing I couldn’t get over is that Connor honestly plays and feels like I’m Mike Haggar in camo: so much of his moveset was next to Haggar’s that I couldn’t tell if it was tribute or just straight up copying, but I can forgive the whole thing.

The Takeover is fun, frantic, has plenty of unlockable game modes and gives a really solid few hours of main story mode, which can be done in episodic arcade style to prevent you from getting burned out all at once. The soundtrack really is a banger, but the constant praise of it really buries the lead on how fun the fighting can be, and how great it is as both a solo and co-op endeavor. Fans of the genre should absolutely pick this up and enjoy the mindless homage and brutally awesome styling that Pelikan13 has brought to the table. Two musclebound thumbs up.

While a bit janky at times, the Takeover really does a bang up job of providing some excitement, fun and, best of all, some great brawling replay action.