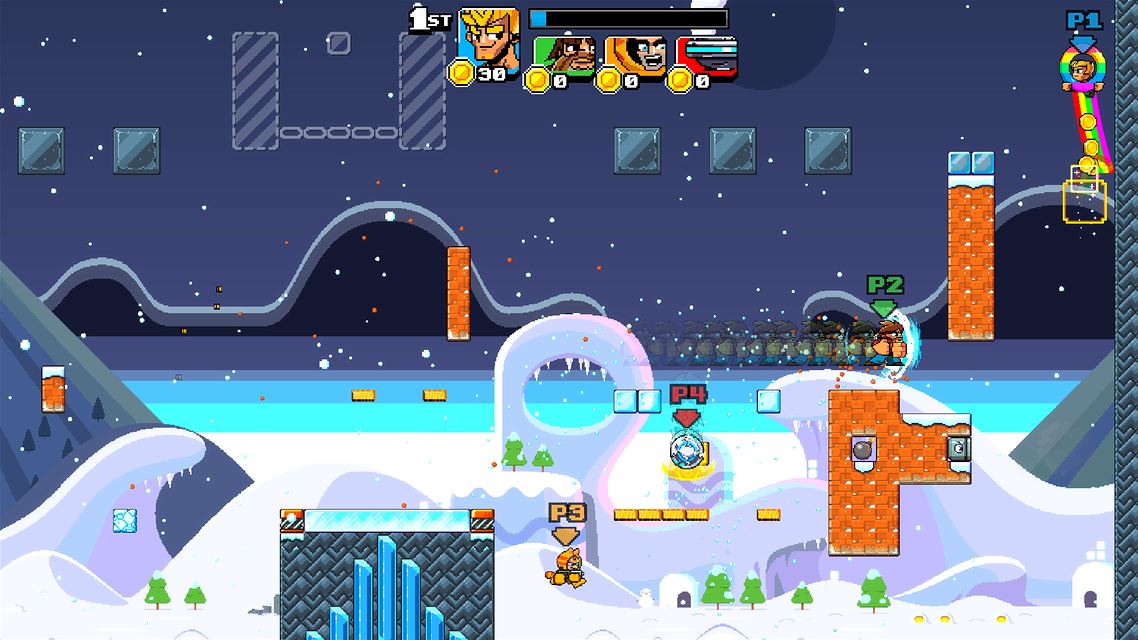 So, imagine if you will that New Super Mario Bros. 2 and Scott Pilgrim vs. the World: The Game went out on a date. Things were going great, but perhaps they had a few too many drinks. Perhaps they got a little carried away and did something stupid. Perhaps 9 months down the line a little bundle of joy decided to show up – well, that little bundle of joy would probably be Mega Coin Squad.

Big Pixel Studio’s, Mega Coin Squad, like Scott Pilgrim before it, makes the wise aesthetic choice to take the fundamental art style of 8 bit and 16 bit gaming without employing any of the technical limitations that such development would have entailed. While there is certainly something to be said for the purity of a Mega Man 9 or a Shovel Knight, I for one am a massive fan of taking the principle of the style but applying it without any real heed to the technical shackles that initially defined them. Like Scott Pilgrim, Mega Coin Squad is a gorgeous game that revels in retro design without letting a strict technical code get in the way of their artistic design. This really is a great looking game.

Also playing into the retro themed visuals is a clear love for Super Mario Bros. 3 with a world map that borders on flat out plagiarism. That style continues into the levels themselves, levels that, while based upon a fixed area rather than a scrolling stage, do play upon many of the visual tropes made famous by Nintendo’s superstar plumber. As you would expect, there are coins everywhere (hence the New Super Mario Bros. 2 reference and, well, the name of game I suppose), but there are also plenty of blocks and enemies that will look immediately familiar to anyone who might have owned a NES. 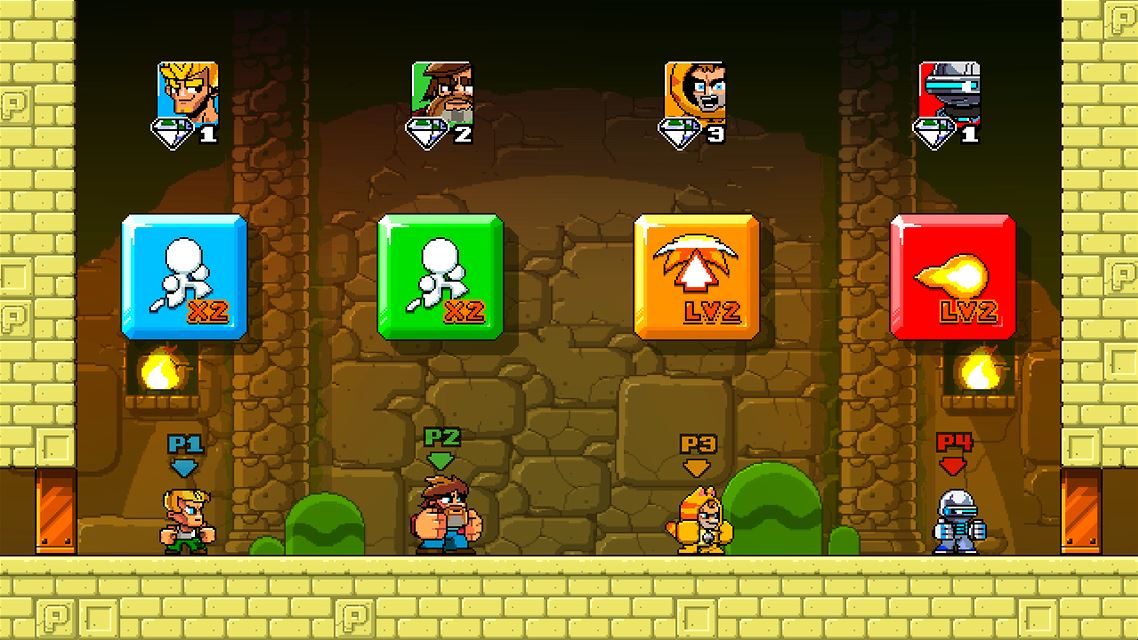 Speaking of the NES, anyone who played the utterly brilliant, River City Ransom, will probably find the character design more than a little familiar. Not only do many of the 5 characters look like they could have come directly from Technōs Japan’s exemplary NES brawler, but thanks to a combined emphasis on platforming and fighting, the game also manages to share at least a little DNA with Big Pixel Studio’s first shot at console gaming.

While all these comparisons might make Mega Coin Squad sound painfully derivative and wholly unoriginal, despite the clear commitment to homage and the relatively simplistic design (collect loads of coins, fill up the piggy bank, don’t get killed, move along), Mega Coin Squad somehow manages to feel like a fresh, enjoyable and wholly addictive experience that takes aspects from many classic games but succeeds in combining them into a new, largely exciting experience.

It’s unlikely to change the world of gaming, but I for one had a great time with Mega Coin Squad’s unique blend of action and arcade-style platforming. With procedurally generated stages, the games’ quick fire gameplay and one more go mentality manage to forgo any sense of repetition by subsequently creating an experience that is relative easy to get through but often very tricky to master. 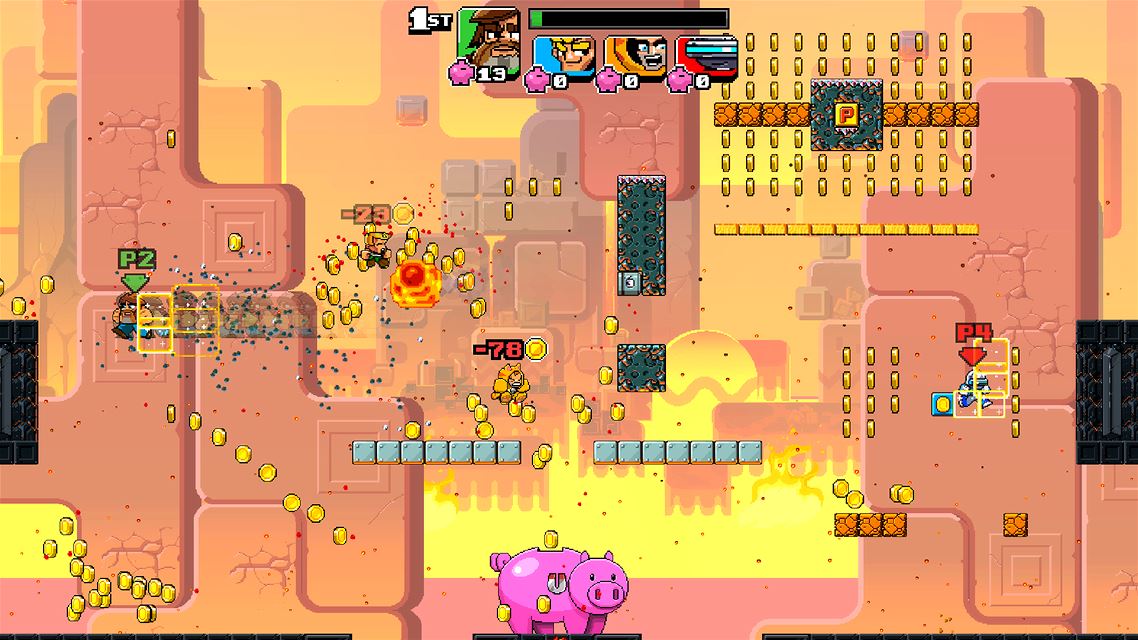 Simply completing each stage shouldn’t cause seasoned gamers too many problems, but with upgrades linked to diamonds, you’re going to want to pick up as many as possible by completing each stage’s bonus requirements. A diamond is offered for one of three completion goals – no death, completion within a the time limit and all coins dropped off (into the literal piggy bank) in one go. It’s a simplistic system that is carried over into every stage, but one that adds a fair degree of challenge while offering up plenty of reward via the incredibly useful character upgrades. With better guns, stronger standard attacks and improved maneuverability, these additional challenges prove both enjoyable and highly rewarding.

While the local multiplayer is certainly a lot of fun, the complete lack of online multiplayer is definitely a loss while the platforming, despite being totally serviceable, can be a little fiddly at times. The weapons work well and the simplistic enemies offer up enough challenge without overpowering the experience, but like many games before it, Mega Coin Squad never manages to match its core inspirations’ core mechanics. They all work well as a whole, but if you’re going to invoke the likes of Super Mario Bros., your platforming and core mechanics are inevitably going to come under scrutiny, and sadly, Mega Coin Squad’s core controls do suffer under closer inspection.

Even with these minor quibbles though, Mega Coin Squad proves an addictive and extremely enjoyable experience. It never manages to surpass the individual fundamental mechanics of any of its major inspirations, but as a complete experience it, well, it just works. The fiddly platforming and complete lack of online options ensure that it invariably falls short of greatness, but as a first shot at console gaming, Mega Coin Squad has to go down as a resounding success and a very solid calling card for a developer that you would do well to keep an eye on.