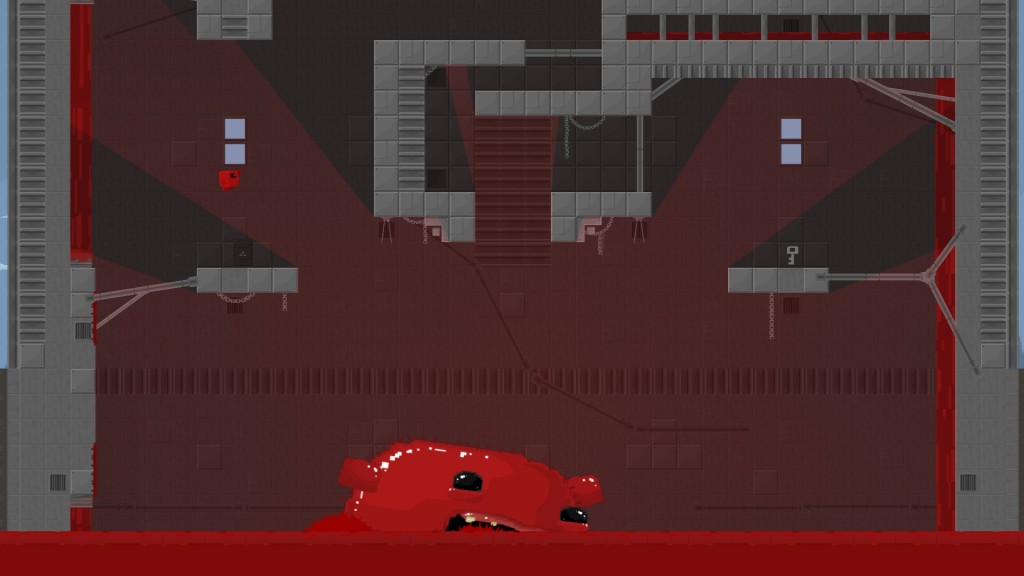 Take a cube of raw meat, a pile of bandages, a fetus in a jar and what do you get? You get Edmund McMillen & Tommy Refenes’ famous indie smash hit ‘Super Meat Boy’. After a grueling five-year wait it has finally arrived in the Sony camp and is available for PS4 and PS Vita. As a bonus, it is free for Playstation Plus members throughout October. So has the wait been worthwhile?

‘Super Meat Boy’ is a very challenging platform game, consisting of over 100 extremely short levels which are designed to beaten quickly. You have unlimited lives and are expected to fail several times as you attempt to nail each stage. Whenever you complete a stage you get to watch all you prior attempts play on the screen simultaneously, so you can watch where you went wrong.

The controls and mechanics are all kept really simple. Meat Boy can run, jump, wall jump and that is pretty much it. He has no special powers or abilities outside of running and jumping. The controls are very reminiscent of the original Super Mario Brothers in that respect. Between the size of the stages and the simple controls, this an easy game to pick up and play in short bursts.

The stages themselves do offer a bit more in the way of variety to keep the pace up. Early levels are all relatively straight forward with plenty of static hazards and rotating saw blades to avoid. However, as the stages progress you’ll be introduced to enemies, conveyor belts, locked cells, keys, cannons, crumbling surfaces, fans and even portals. Although many of these types of obstacles have been seen in hundreds of platform games before, Super Meat Boy does find some interesting new ways to experiment with them. I particularly enjoyed holding on to vertical conveyors in order to thrust myself into the sky.

The aim of each stage is to grab ‘Bandage Girl’ who’ll be helplessly trapped somewhere within the level. In true Donkey Kong fashion, as soon as you locate her Dr. Fetus will emerge to clout you and run off to the next stage with her. The various stages are split between five main worlds (plus a few extras), which are mainly different cosmetically although particular obstacles are more common in specific worlds.

Each world has a total of twenty stages which can be attempted in any order you wish. When all twenty are complete a boss challenge will unlock, and after the boss has been defeated the next world will become available. As there is no actual combat in the game, the boss levels are structured in unique ways such as races, chases and climbing stages. 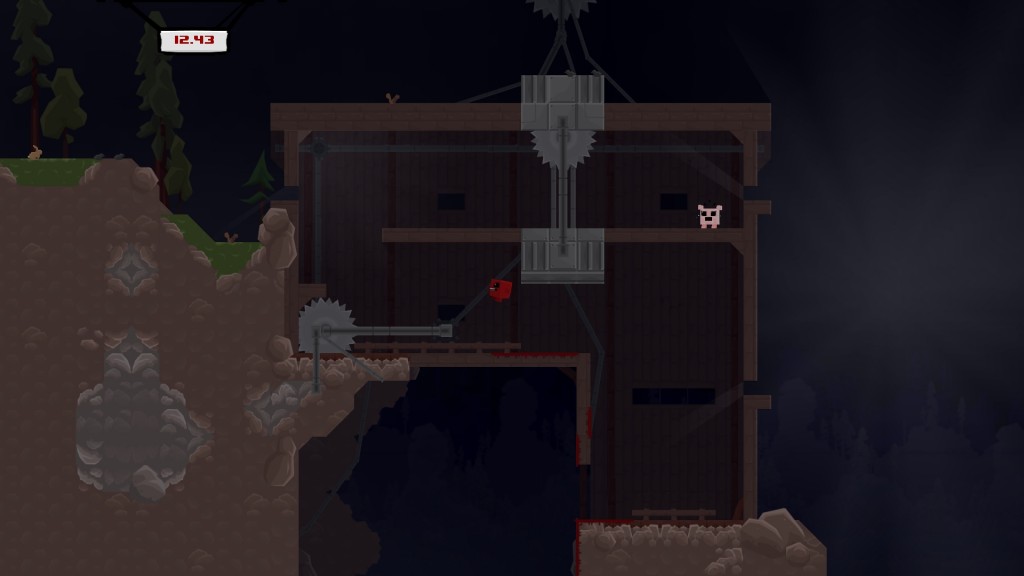 Getting to the end of the game can be very difficult, but if you’re skillful enough it is possible to get to the end of SMB within a few hours. Even if you are a veteran in the platform game genre, the challenge doesn’t have end after you’ve beaten the last world. There are a variety of additional challenges which have to be completed in order to score 100%.

The game includes a ranking system which will measure your performance in each stage. By mastering each stage it’s possible to earn ‘A’ rankings which will unlock “dark world” versions of these levels, effectively giving you an extra 100 plus levels to beat. These challenges have the difficulty dial turned up to 11 and require extremely skilled players in order to complete. I have to confess that at this moment I still have plenty of these stages left to unlock and beat.

In addition to the dark stages, the game also features a lot of collectibles and bonus stages. There are bandages littered throughout the game which are always positioned in really awkward places. Beating a level with a bandage will add to your overall score and contribute towards the 100% total. By reaching warp zones hidden within the main levels, you can discover some retro style bonus stages. These stages include a life limit to add an extra bit of challenge, however beating them can lead to some fantastic rewards including unlockable characters.

There are some great perks to unlocking extra characters. Many of these characters are actually cameos from other popular indie games, as such they feature their own unique abilities like double jumps, hover jumps and speed. One character that I’m really pleased to see included is ‘The Kid’ from the infamously rage educing freeware title ‘I Want to Be the Guy’. This is a very suitable cameo since ‘I Want to Be the Guy’ shares a lot in common with ‘Super Meat Boy’. Both feature difficult platforming, small sprites and lots of references to classic retro games.

Super Meat Boy was created in Flash, as such the animation (all be it fairly minimalist) is really well drawn and presented very nicely. Rather than using a lot of different colours at once, the various levels have colour scheme with a lot of focus on shading, texture and lighting. The animation looks a little bit South Park in spirit, with goofy cartoon sprites and buckets of blood splattered all over the surfaces where Meat Boy travels. It’s a tad juvenile however that’s never necessarily a bad thing. In fact when compared to Ed McMillian’s previous indie epic ‘The Binding of Issac’, Meat Boy actually looks pretty highbrow. 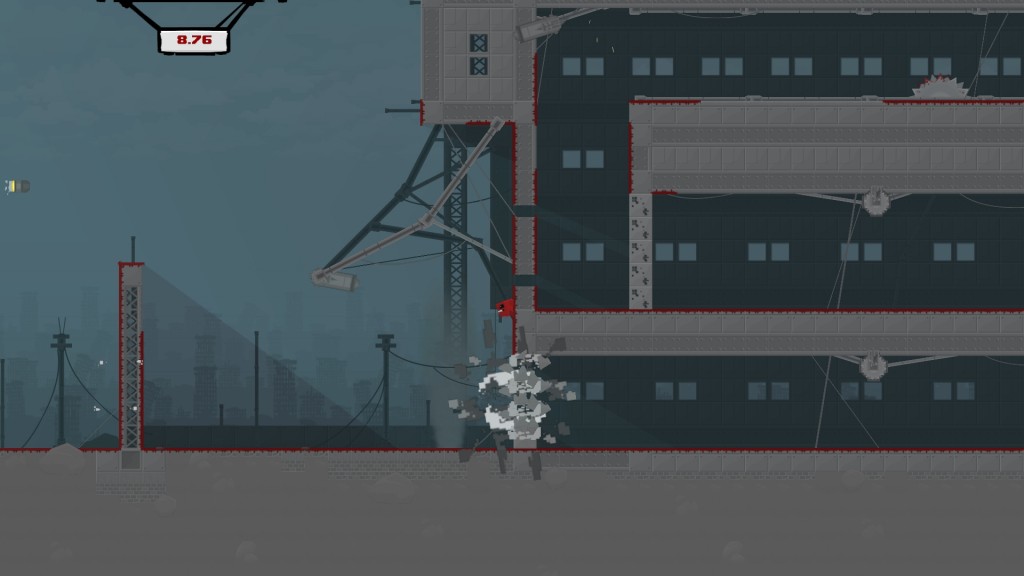 One area where this new version of SMB falls short is the sound, more specifically the soundtrack. The Playstation versions include a new soundtrack which is a lot more focused on rock instruments rather than synthesised electronic music. I’ve listened to both versions side-by-side and in my opinion the original soundtrack is a lot better. I like about two tracks from this new version but the rest of the music is very forgettable. This is a subjective matter and players who prefer rock may have a better appreciation for this new version, but if I’m honest it’s not for me.

Internet rumors have suggested that the original music couldn’t be included for contractual reasons, making this soundtrack a substitute and not the intended music. However, I’ve not been able to find a reliable source to confirm this. It may have been an artistic choice, but the fact that there is no option to switch to the original music implies that this may very well be the case.

With regards to technical problems, I did have to restart the game on one occasion due to a sound error. A piece of music from a level I had quit had failed to stop and continued playing on top of the music that I was supposed to be hearing. The result was a garbled mess and the only way I could make it stop was to quit the game. This was the only bug I encountered and it only happened the once. I’m sure it’s an easy problem to patch if it persists.

In conclusion, Super Meat Boy is a big part of indie game history for a reason. It’s a genuinely good game that, although may already be showing signs of age, is still a blast to play. It was not the first outrageously difficult platform game and certainly won’t be the last, but it definitely stands out on its own as a superb piece of work. Every gamer should try this at least once.