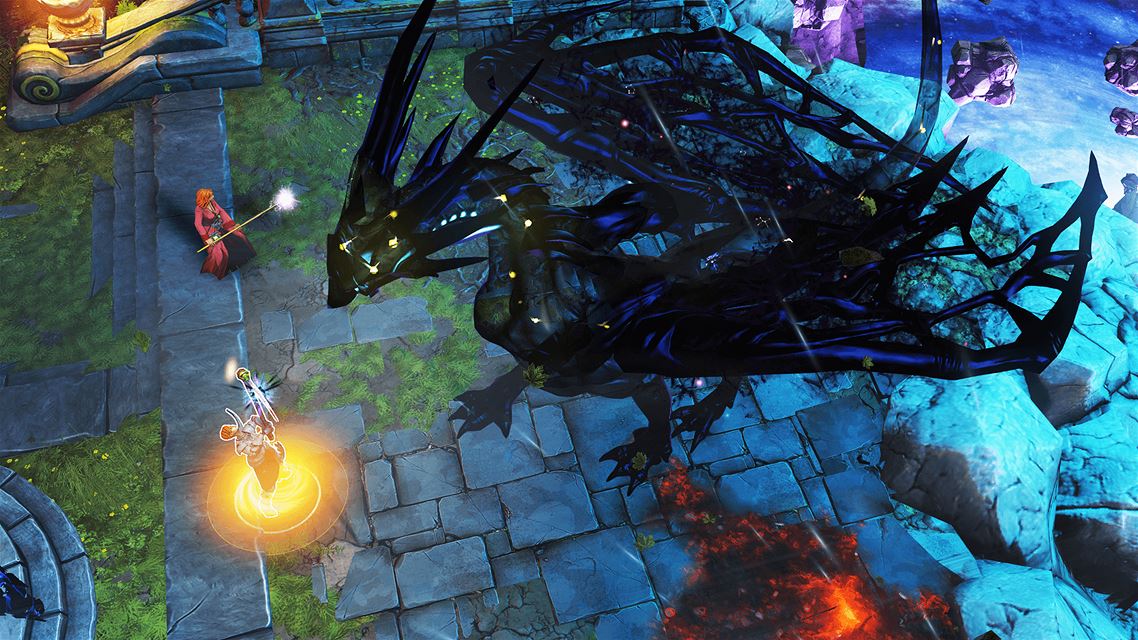 I’ve never been a big PC gamer, but one game that has always stood out for me is Baldur’s Gate. The isometric, stat heavy RPG was something of a revelation upon release and is probably the only PC exclusive that I have spent a considerable amount of time with. I’ve tried to replicate the experience by taking on any number of home console equivalents, but honestly, few have grabbed me and none have come close to capturing the magic of BioWare’s exemplary 1998 fantasy role-playing video game…….. well, that was until the recently released, Divinity: Original Sin Enhanced Edition that is.

Larian Studios’ fantastic RPG was released to critical acclaim on PC just last year, and while the quality of the content has never been in doubt, the developer’s ability to successfully port what is one of the most complex, menu heavy RPGs of all-time to home consoles certainly was. While duplicating the solid but somewhat old school visuals to the current generation of consoles was unlikely to cause too many problems, the idea of replicating Divinity’s notoriously complex interface on a console controller certainly seemed an almost Herculean task.

Luckily, it appears that, Larian Studios were more than up to said task, and while it isn’t without fault, they have nonetheless managed to not only make the game work with a controller, but for the most part, make it feel like a surprisingly natural fit. Yes, you will occasionally spend more time in menus than you would like, and yes, the inventory system can feel somewhat cumbersome at times, but these are only minor issues, and for the most part, Divinity: Original Sin Enhanced Edition feels like it was built specifically with console gaming in mind.

Due to the simple convenience of mouse and keyboard play, Divinity will always be a better fit for PC, but saying that, if you can live with the less accurate but otherwise fantastically implemented console controls, Divinity: Original Sin Enhanced Edition is arguably a match for its PC brethren and the most successful console port of its ilk since, Diablo III: Ultimate Evil Edition proved rather unequivocally that this type of game can be a success on home consoles. 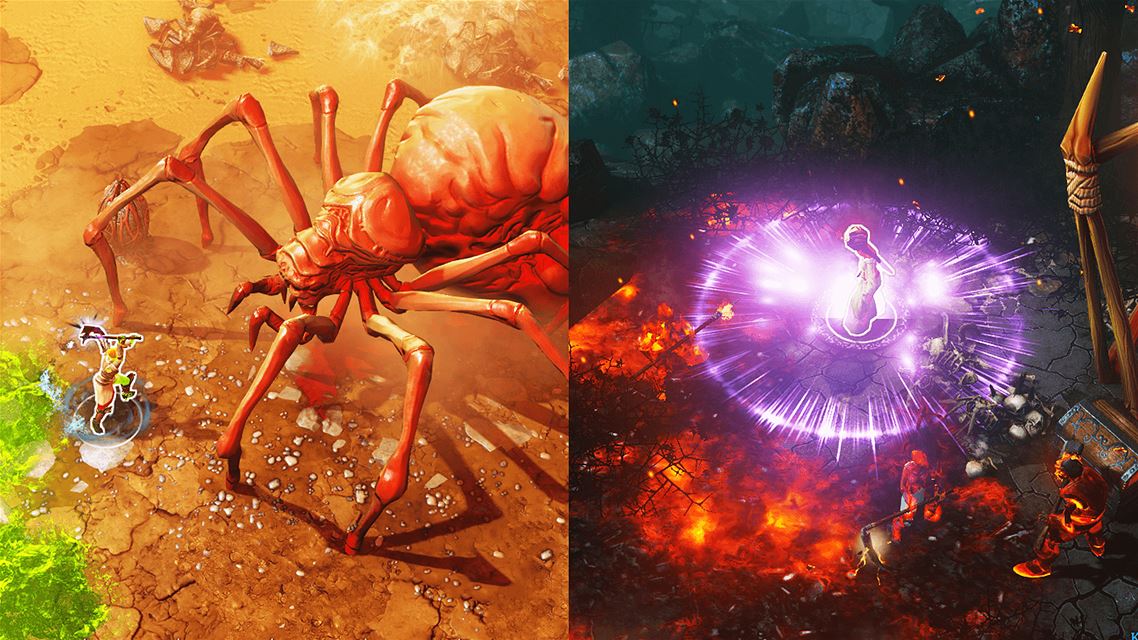 With improved visuals, additional audio, several reworked areas and additional balancing, this really does feel like the ‘definitive’ version of what was an already fantastic video game. The biggest new addition however (other than a pretty sizeable change to the games’ ending), is the inclusion of local and online co-op for two players. With the split-screen gameplay working much like that found in the Lego series, you can split off and head in opposite directions, thus allowing players to do their own thing, even if the challenge provided by the game would suggest that sticking together is probably for the best.

In fact, the difficulty, while fine for the most part, represents one of the games’ few ongoing issues. There has been some balancing done for the definitive edition, but Divinity is still home to more than a few unpleasant difficulty spikes. None are insurmountable, but a few challenges deliver huge spikes in comparison to that found in the rest of game and are tough enough to slow previously steady progression to an absolute crawl (for a short while anyway). It’s hardly game breaking stuff, but even on the second attempt, Divinity’s difficulty still feels disappointingly uneven.

Difficulty spikes aside though, Divinity remains a fantastic achievement and a genuinely brilliant fantasy RPG in its own right. Some will find issue with the potential randomness of the dice roll battle stats, but as is always the case, the roll can ultimately go either way. Sure, you’ll get burned on occasion, but like refereeing decision, the rolls tend to even themselves out over the course of the season (or game).

Whether you be a fan of the underlying dice-based statistics or not, it’s hard to argue with the fact that the turn-based combat is ultimately both rewarding and deep. Like so much in this game, it can be a tad overwhelming at first, but as your learn to harness the abilities of your chosen heroes, the tactical use of special abilities and the saving of action points soon becomes second nature and a major part of your approach to subsequent battles. 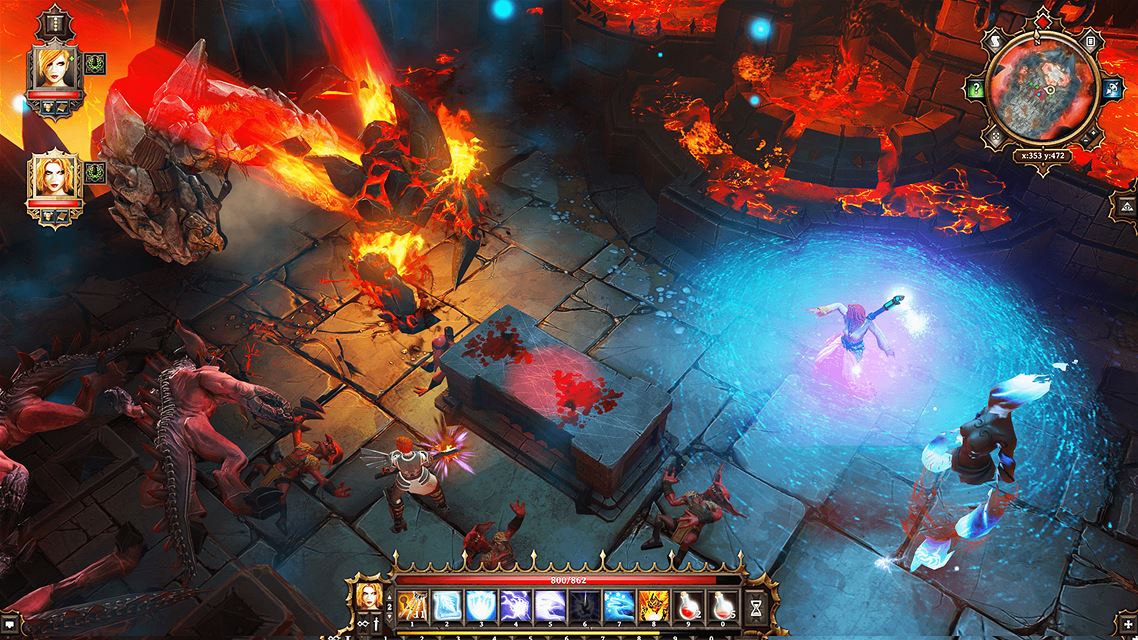 Your abilities each round are based upon the number of action points at your disposal. Be it moving, attacking or special abilities, each action takes up points. While this is nothing new in its own right, here, you can tactically save unused points for use in the next battle, thus adding an additional layer of risk vs. reward to each encounter. It probably doesn’t sound like a major addition on paper, but in practice, it adds a great deal of depth to and already extremely deep and incredibly rewarding battles system.

As great as battle might be though, it’s arguably the writing that steals the show. The core story itself is decent rather than genuinely ground breaking, but the delivery and in particular, the writing, is of such a high standard that the relatively bog standard core story is raised well above its station as a result. As is so often the case in games such as this, it’s the side stories and incidental details that really bring the world to life and often provide the most interesting and nuanced aspects of the games’ heavyweight narrative. Divinity’s world is full of characters, and by God, don’t they all want something or another from you.

With the potential for the quests to pile up (and pile up they will), you’ll be glad to hear that Divinity has one of the finest quest logs I have ever come across. Your inventory might cause you a fair bit of trouble, but the quests, they are always easy to access and even easier to follow. The log updates as you advance through your adventure, constantly reminding you of what needs to be done without ever screaming it in your face like an unsavoury drunk. I am often put off by extensive quest requests that seem to build up in the background while playing especially long RPGs, but here, I was happy to take on those additional quests, happy in the knowledge that I would be reminded of them whenever I come across an opportunity to actually complete them.

Whether it be the finer details that the game gets so right, the brilliantly written script, the deep, addictive battle system or the simple fact that, Larian Studios have somehow managed to make it all work on a home console, the fact of the matter is; Divinity: Original Sin Enhanced Edition, regardless of where you decide to play it, has to go down as one of the single finest Western RPGs released in the last five years. The main story might be a somewhat conservative and the inventory can certainly be a tad cumbersome, but despite these most minor issues, Larian Studios’ fantastic update to the already splendid 2014 vintage proves that traditional PC RPGs can work on console as long as development is treated with the kind of care and attention required to make the move possible.