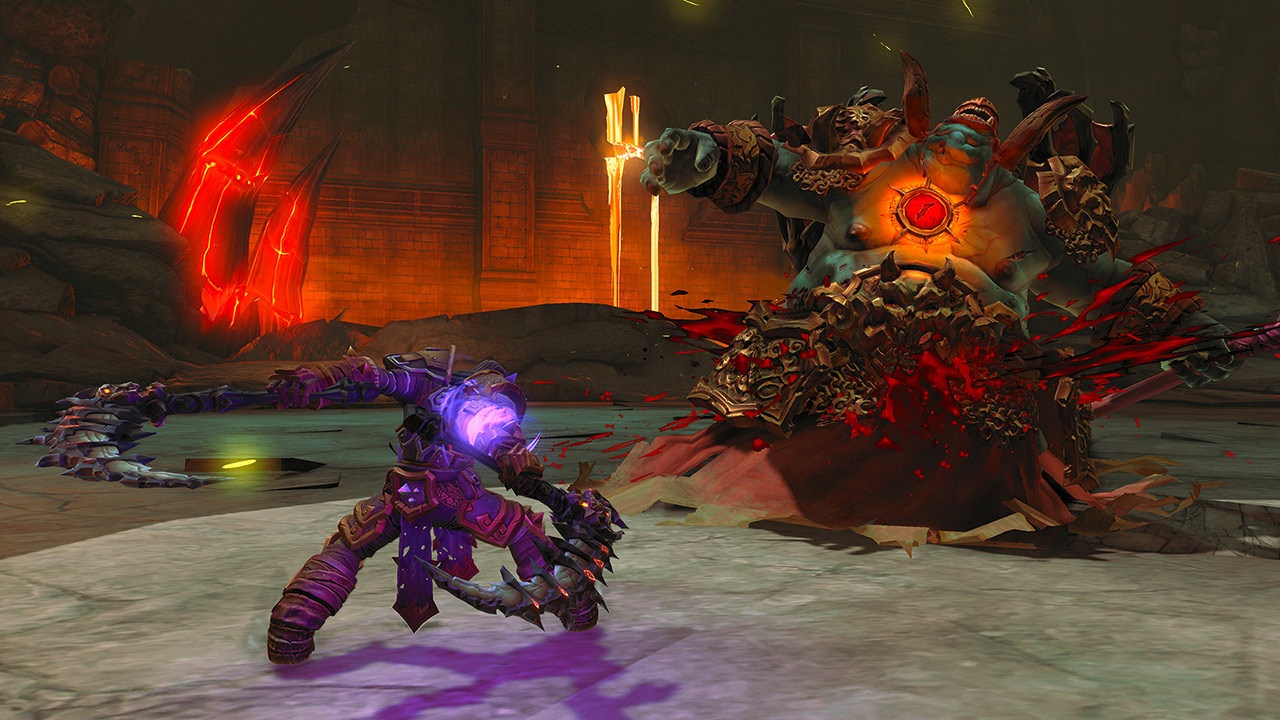 ‘Jack of all trades, master of none’. It is a criticism that has been aimed at the Darksiders series any number of times, but one that, upon returning to the largely enjoyable sequel a few years after its initial release, now feels more apt than ever. This is not a bad game by any stretch of the imagination (in fact, it’s often a very good one), but it remains all but impossible not to be constantly reminded of other, often superior games. Don’t get me wrong, few video games attempt to cram quite so much into a single adventure, but whether it be the combat, the exploration, the puzzles, the loot system or the art direction, Darksiders 2 constantly encourages comparison to some of the finest video games ever created, comparison that is often unkind to this solid but somewhat unremarkable follow-up to the surprisingly entertaining original.

Of course, many will have already experienced Vigil Games’, kitchen sink adventure game when it was released back in 2012 on PS3 and Xbox 360, and just to be clear, other than the additional DLC being included on the disc, this is the exact same game as it was in 2012. The visuals have been upgraded to 1080p, thus giving the game a much sharper look this time around, but as for the textures themselves, they are all the same as they were a few years ago. This is often an issue for many of the last-gen re-releases making their way over to PS4 and Xbox One, but thanks to its fantastic and largely stylised art design, the move to 1080p actually benefits the games’ visuals a great deal.

Sadly, the same can’t be said of Darksiders 2: Deathinitive Edition remaining locked at a disappointing 30fps. While I have never been big on the whole 30fps vs. 60fps debate, here, especially after playing the recently released, God of War III: Definitive Edition, the 30fps undoubtedly has a detrimental effect on both the visuals and the subsequent gameplay. In combat in particular, things feel surprisingly jumpy, and even when you simply move the camera around quickly, you really do notice the difference in comparison to the silky smooth God of War III. I appreciate that 30fps isn’t always possible, but for what is supposedly the definitive (or Deathinitive) version of the game, the lack of a 60fps lock does feel like a somewhat disappointing omission. 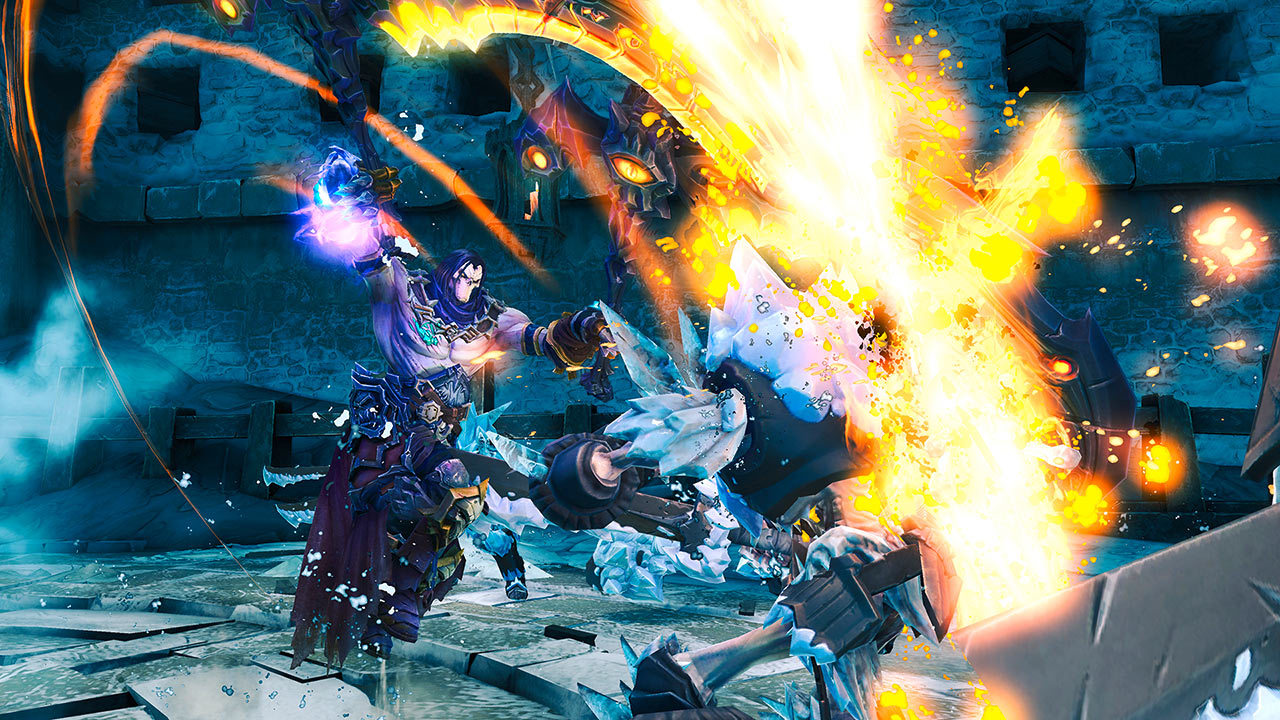 Still, lack of noticeable improvements aside, Darksiders 2 remains a sizeable and highly entertaining amalgamation of many of the finest games around. Be it the Zelda-style puzzles, the God of War-esque combat or the Prince of Persia-like traversal, Darksiders 2 borrows liberally from all of these games, and while it fails to surpass (or even match) any of them, it does a very solid and largely convincing impression of each. More impressively however, and ultimately what makes Darksiders 2 more than the sum of its individual parts, is its ability to take each of these disparate play styles and mechanics and make them all work in what is a cohesive and consistent game world.

Moving between each discipline is often seamless and with a huge, partly open world to explore, Darksiders 2 does a great job of providing you with all of the tools necessary to take on this vast, varied and undeniably beautiful world. Sure, it is a little, well, purple at times, and yes, Death does look like Soul Reaver’s, Raziel after a year on the protein shakes, but like its lead, Darksiders 2’s world is one that is incredibly difficult to dislike.

The story might not make all that much sense, but it’s delivered with gusto and all framed in a world with far more variety than the original. From icy plains to lush green environments, Darksiders 2 might not do anything all that new from an artistic standpoint, but what it does, it tends to do very well, and with a fantastic orchestral score underpinning the action, it certainly delivers plenty of scope and spectacle while also providing a very rewarding and addictive sense of progression. 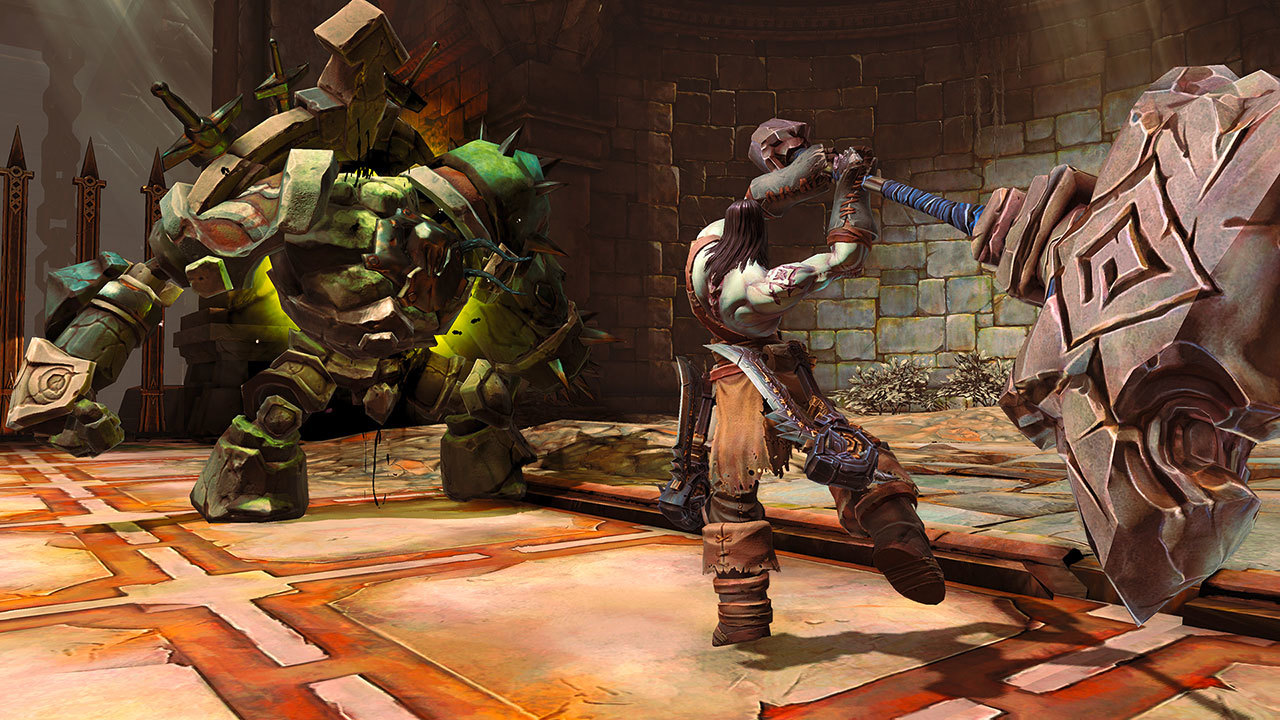 That sense of progression is mirrored in the anti-hero of the piece, Death. While his name certainly has negative connotations and his actions can be rather unsavoury, he proves a surprisingly affable lead thanks to some great voice work and a solid script. Arguably more importantly however is the fact that his powers, attire and move-set can all be upgraded as you progress. The loot system might not match the Diablo III’s of this world, but it does give you a reason to investigate the world around you while providing plenty of reason to take on the games’ myriad of wide ranging if largely vanilla side quests. It’s a shame that a handful of combos will see you through the vast majority of battles, but for those looking to do things with a little more style, the array of secondary weapons, additional magical abilities and special attacks allows for plenty of experimentation for those looking to rub a little stank on their killer combos.

As entertaining as the combat might be, like everything else in Darksiders 2, it’s never quite as good as any of the games that it so brazenly imitates. And that’s the big problem isn’t it – the puzzles, the traversal, the visuals, the story – it has all been done better somewhere else. To its credit though, few games (if any), have managed to bring so many gaming disciplines together in such a consistent and engaging manner. Yes, it might well be the Jack of all trades and the master of none, but by getting so many things right, it’s subsequently hard to begrudge the fact that it rarely does any one thing with any sense of notable distinction. Just like it was back in 2012, Darksiders 2 remains an imperfect video game, a hodgepodge of disparate ideas taken from superior games, but one that, despite its issues, remains more than the sum of its individual parts and a fantasticly entertaining adventure in its own right.