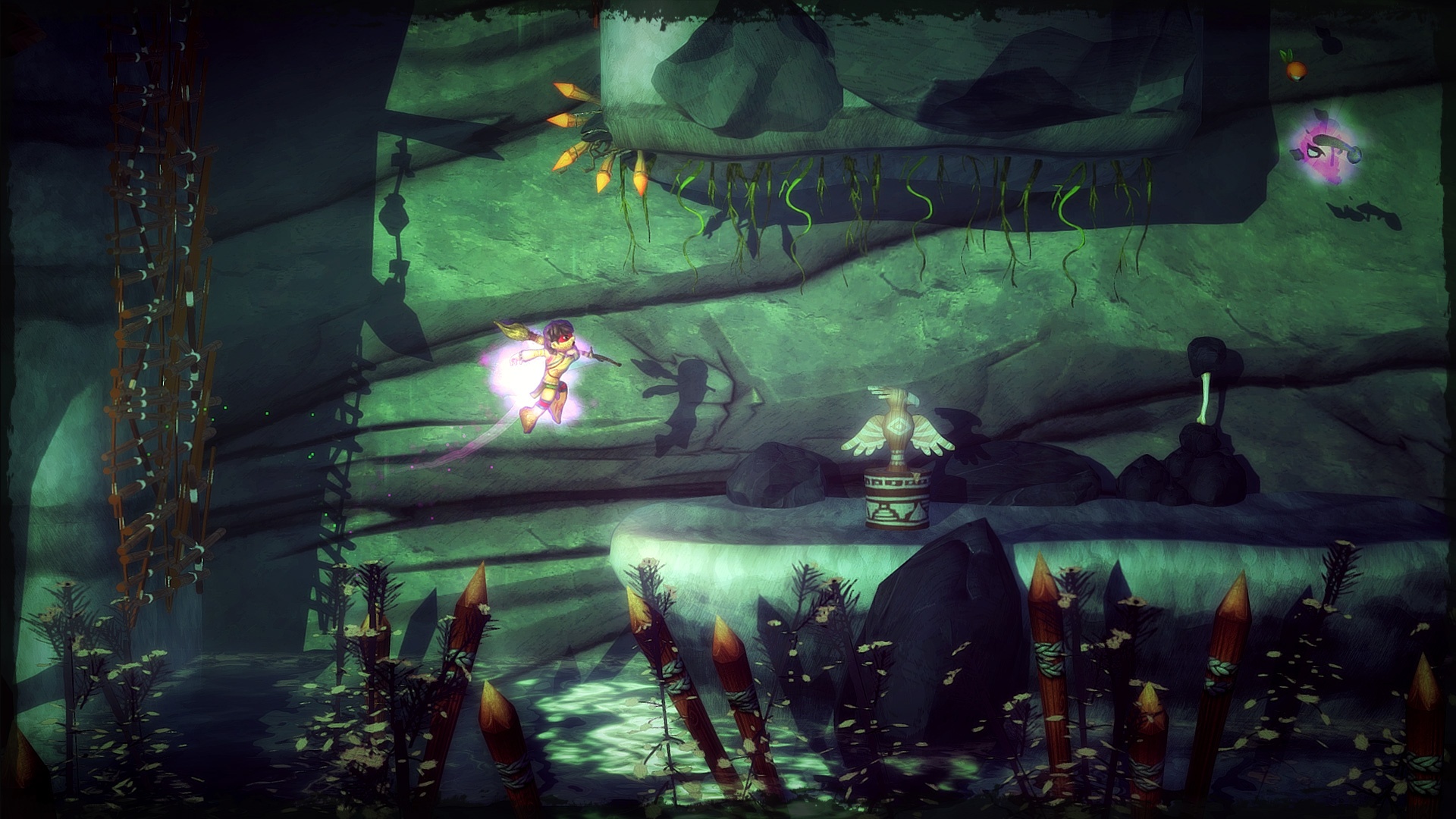 Aritana and the Harpy’s Feather is an odd game in many respects. While instantly familiar due to its 2D side-scrolling gameplay and cartoon-like aesthetic, it nonetheless feels like a game lost in time. Its visuals design is pure 90s platformer and is reminiscent of the 16 bit Donkey Kong titles while still managing to look like a hi-res PC-Engine release (probably because it reminds me of Bonk), but its gameplay, while traditional in many respects, introduces numerous unique mechanics thanks to a control scheme that is as smart and interesting as it is potentially infuriating.

While the story is as simplistic as one might expect from a game of this ilk, the art design and tone varies wildly between throw away fun and the surprisingly sombre. Following Aritana on his journey to save the life of the village’s chieftain, he is charged with finding the Harpy’s feather needed to complete the exorcism of the evil spirits taking over his body. This take on indigenous tribes and South American folklore might sound rather bleak (and I suppose it is), but it’s all played off against a backdrop of colourful visuals and caricaturish design. Again, like everything else in this game, it’s an strange mix that is equal parts successful and confounding.

Still, aesthetic and tonal inconsistencies aside, this kind of old-school side-scroller inevitably lives and dies by the quality of its gameplay, and while it certainly has its fair share of high points and successfully implemented mechanics, like everything else in this game, the core gameplay proves to be a decidedly mixed bag. At its best, it’s an exciting action platformer with a unique control scheme, but at its worst, it’s a cumbersome mess that isn’t nearly as accurate as it needs to be. 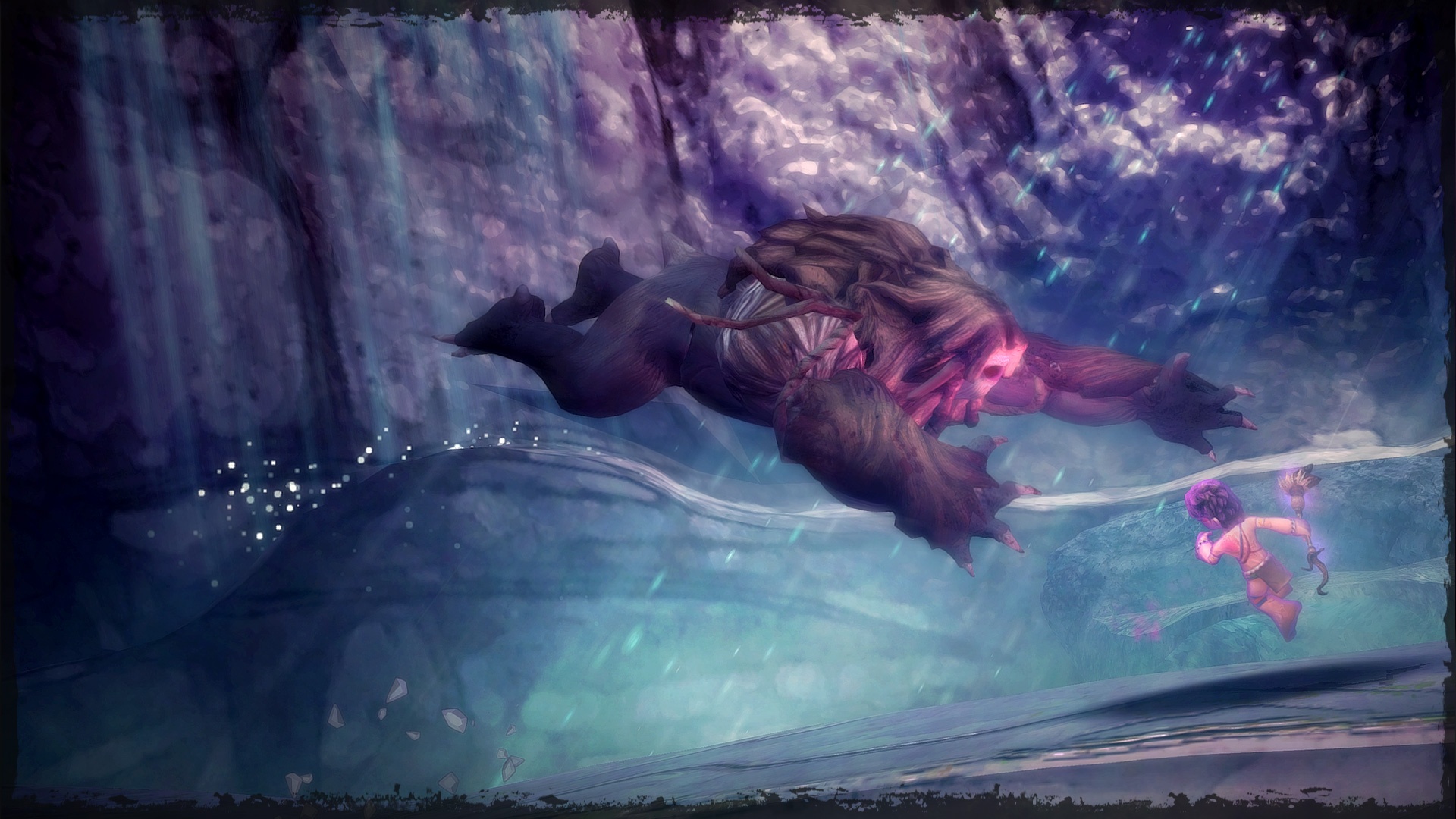 Rather than simply jumping on enemies heads in the traditional manner of the platformers of yore, here, you are required to attack via and a kind of downward dive. This, like the standard ground attacks, is achieved via a simple flick of the right thumbstick. It’s not what we’re used to in a traditional platformer, but on its own, it works fine, and when everything clicks into place, actually adds to the games’ sense of constant forward momentum. Switching between attacks on the right thumb stick and jumping via the A button can be a tad unwieldy, but for the most part, it actually works pretty well and helps to give the game something resembling a unique identity. The thing is, despite its issues, when it all comes together, Aritana is a smooth a slick platformer that provides a pleasing sense of perpetual motion that goes beyond the simplicity of more twitch-based endless runners.

Sadly, these moments are rare, and far too often, the game gets in the way of the fun thanks to its slightly awkward control scheme and occasionally inaccurate platforming. The first problem lies with the fact that the somewhat unique ‘stance’ mechanic constantly feels like more effort than it’s worth. It’s an intriguing addition on paper, but with one slower stance for combat and another faster one for general traversal and longer jumps, having to switch between the two on the fly can lead to a number of irritating deaths as you attempt to make otherwise makeable jumps in the incorrect stance and subsequently fall to your death. 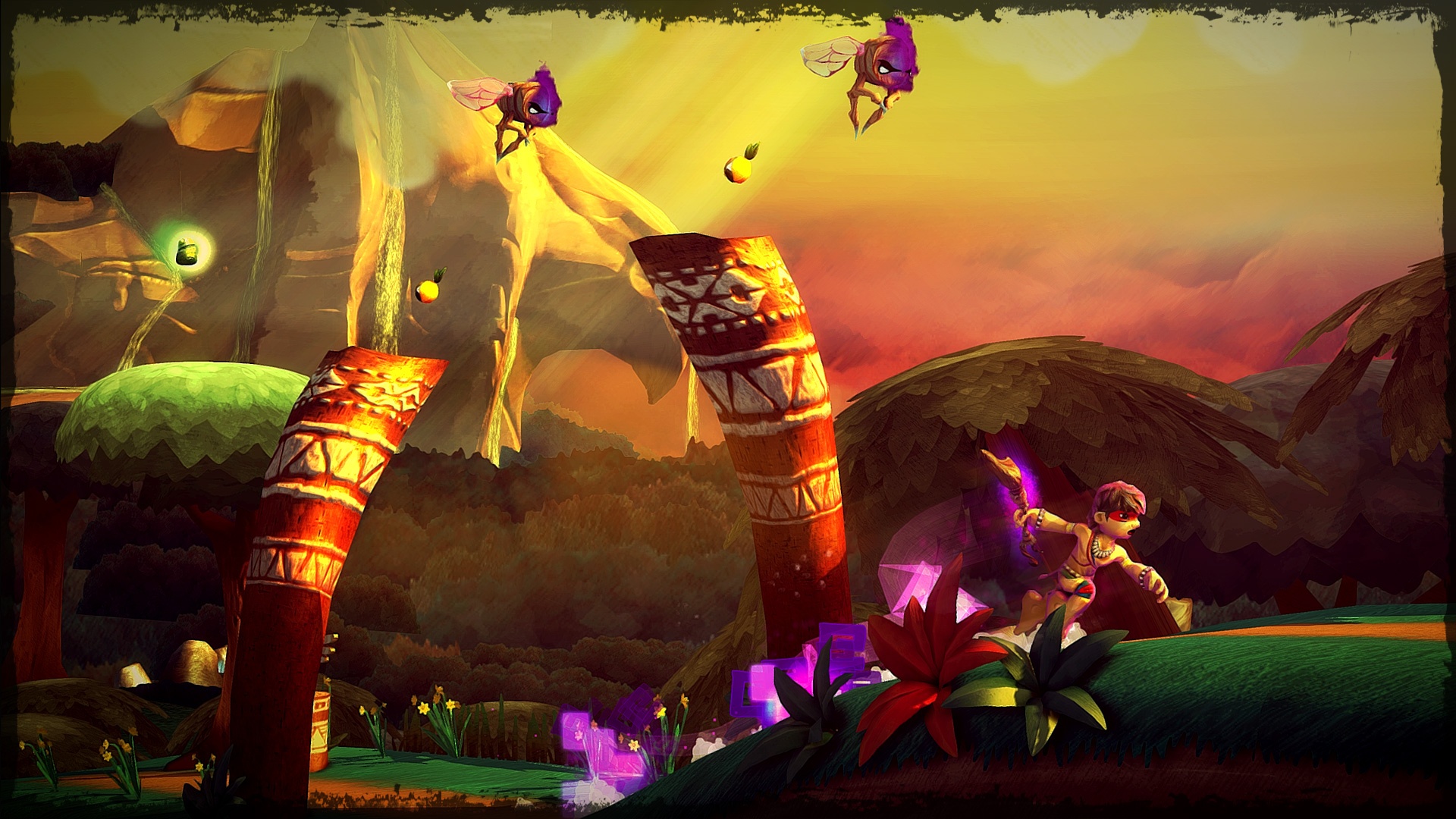 That might have been easier to bear if the rest of the game was up to scratch, but beyond the level design failing to work cooperatively with the stance system, the actual physics are often too floaty and inaccurate to make this game worthy of mention alongside the greats of the genre. Again, when everything clicks, when you’re in the zone and jumping between obstacles and enemies, Aritana actually plays very well, but when not in full motion, it all just feels, well, a little bit low rent.

Nothing about Aritana and the Harpy’s Feather is particularly bad, but then, nothing is all that great either. It’s relatively short on content, the boss battles are extremely repetitive and the control scheme, despite showing signs of potential, has not been successfully married to the games’ level design or physics. Everything works in the most fundamental of senses, but that doesn’t mean that it’s all that fun to play. It certainly has its moments and there is definitely something to be said for its nostalgically pleasing aesthetic, but sadly, despite its positive aspects, there are just too many poor design choices to make this a genuinely recommendable experience. Fans of 90s platformers will invariably get more from the experience, but even the most nostalgic of gamers are likely to be left exasperated by the cumbersome controls and somewhat loose movement.