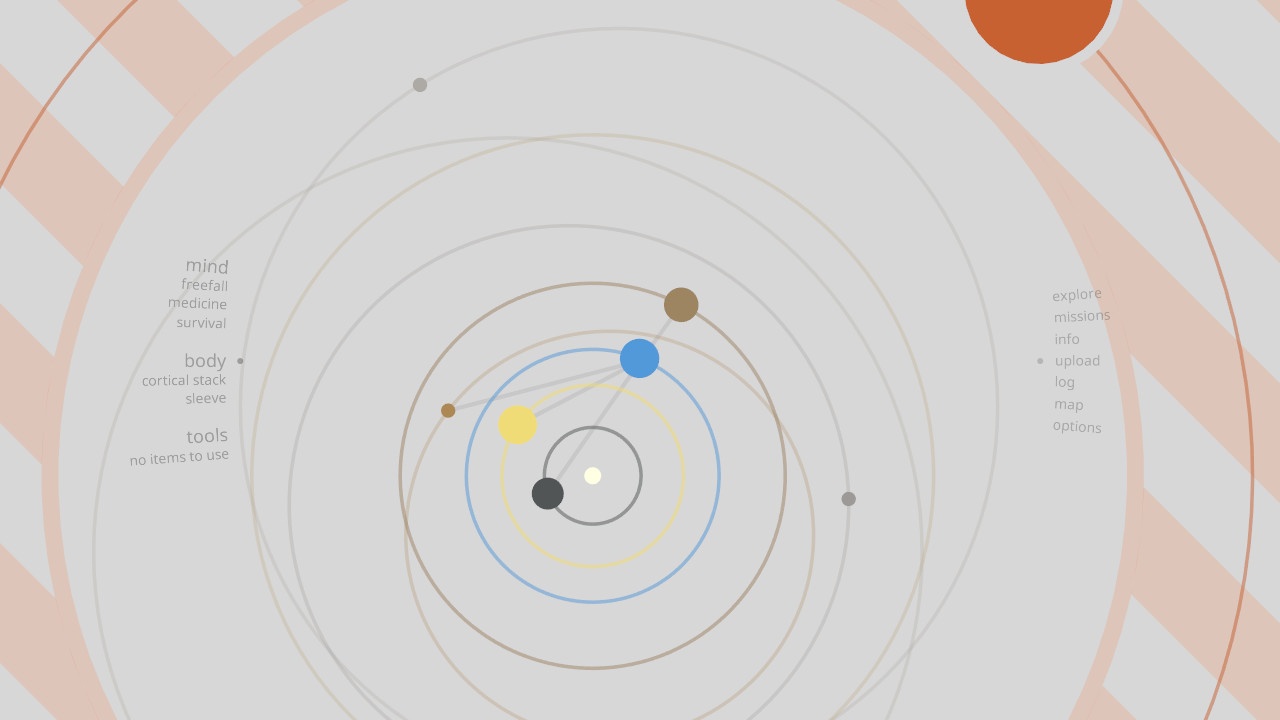 Reviewing Sun Dogsis a tricky prospect. Calling it a game at all is fairly generous as you drift around the galaxy with your occasional stops triggering a sentence or two of science fiction infused storytelling. Indie games are often free to innovate with more experimental styles, but different doesn’t always mean better. So how does this unusual effort from developer Royal Polygon fare?

As a self-confessed science fiction enthusiast the premise of Sun Dogs instantly appealed to me and the brief text interludes that pop up on your journeys are definitely evocative of the great authors like Arthur C. Clarke, Ray Bradbury and Philip K. Dick and offer brief glimpses into this future that takes inspiration from a whole host of sources. In particular it embraces the transhumanism theory, where mankind has developed to the stage that physical bodies can be freely manipulated and minds can be backed up and restored. With immortality essentially achieved, exploration is your only real motivation and there’s no hurry to do so.

Unfortunately when it comes to exploration it soon becomes apparent that there’s a fairly restrictive limit on what you can do. Only the inner core of our solar system seems to be available to explore – although Saturn and Jupiter are visible they remain just out of reach. This leaves just a handful of the recognisable planets along with their various moons, asteroids and space stations for you to stop off at and the big problem here is that there isn’t a lot to do. Each location includes a brief synopsis which never changes, and also has the option to explore which results in a semi-random event. However while I started off eager to discover as much as I could about this mysterious future this quickly waned as I often found myself visiting the same locations and reading the same narratives. 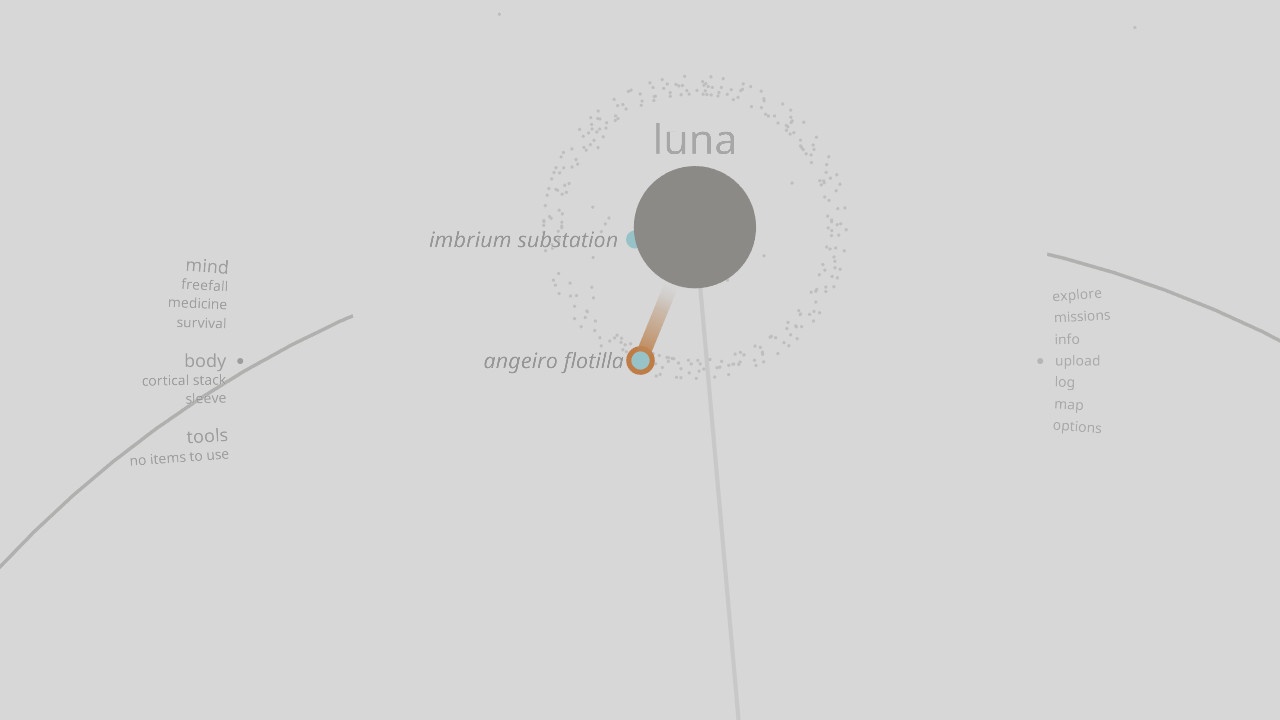 The gameplay isn’t the only unusual element of Sun Dogs, as it’s actually the strikingly minimalist graphics that initially caught my attention. A pale grey canvas sets the backdrop for the planets of the milky way, here portrayed as simple circles in pastel colours that lazily travel in their respective orbits. The stark style is definitely eye-catching although I was perturbed by the decision to use grey text on a grey background, made worse by the poor resolution that meant the various location names were unreadable to me until I had edited the settings. There’s not too much to say about the quiet, ambient score that serves as the soundtrack for Sun Dogs expect to say it suits the tone of the game pretty well and doesn’t become repetitive.

I quickly became frustrated with my first attempt to play Sun Dogs but did enjoy it more after I’d taken a break and resumed my explorations. Once I’d put myself in the right frame of mind for a sedate experience and wasn’t rushing to experience everything I did definitely appreciate it a lot more and there was some semblance of an aim once I’d managed to unlock a mission (and there are apparently a handful more). Weeks, months and years passed as I slowly moved between planets and gradually uncovered more of the in-game text along with occasional items and skills. 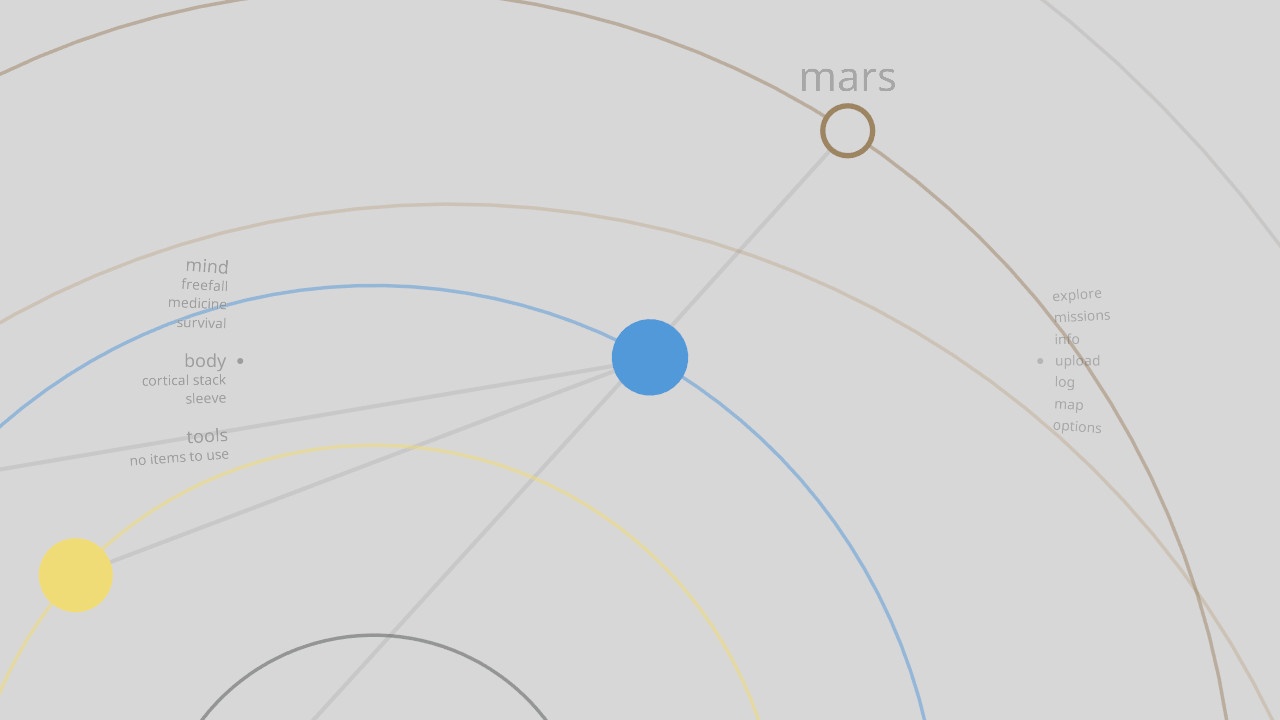 However while I did start to appreciate the game a bit more at the same time it became clearer that the quality of the writing was severely lacking. Although at the start it seemed to do a good job of imitating the classic style of great science fiction writers it soon comes across as derivative and pretentious with no real self-awareness. The premise behind the game is fascinating but the rambling and semi-coherent narrative is a waste of potential.

A number of spelling and grammatical errors also irked me, although I was able to justify it to some extent by using the in-game logic that language was constantly evolving. However I wasn’t able to rationalise the broken volume settings which seemed to be permanently set to ‘loud’.

Overall Sun Dogs is a grand experiment poorly implemented and severely hamstrung by a lack of actual stuff to do. Even the prospect of gently wondering the solar system and allowing yourself to enjoy the game for what it is, is set back by lack of quality in the writing, although interestingly the developers have left this aspect of the game open for modding so it’s possible we could see alternative versions that describe a completely different future. However enticing that may be, in it’s current form Sun Dogs is a great idea that provides a few hours of distraction but nothing more.