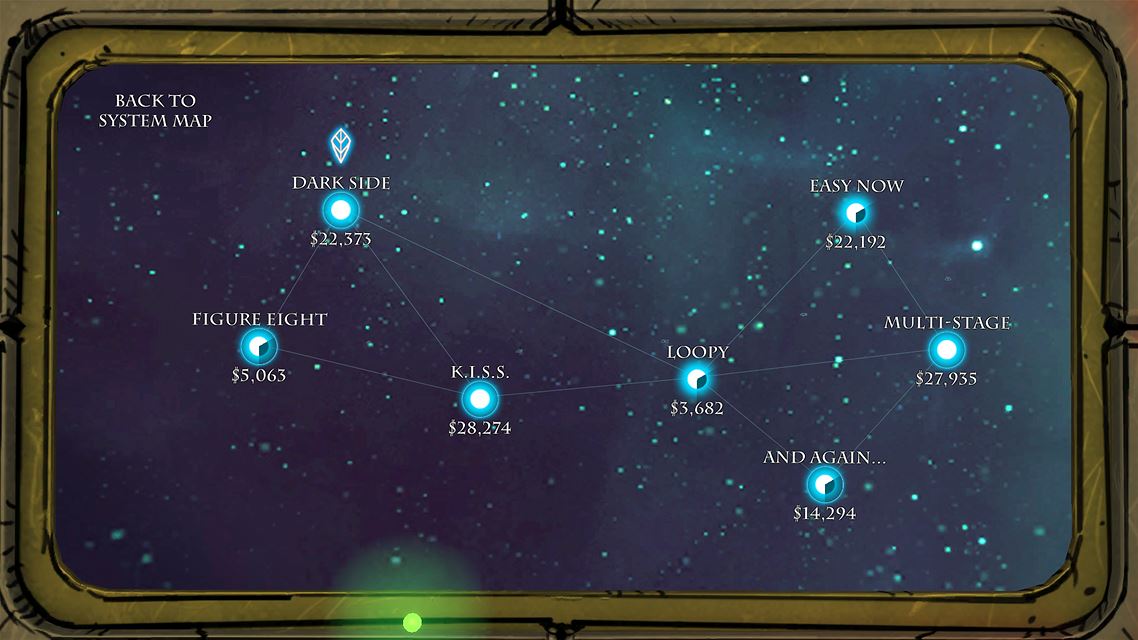 G Prime into the Rain, at a fundamental level at least, is an addictive and extremely challenging physics-based puzzler. Not a million miles away from the Angry Birds of this world, its core mechanics are essentially built upon a catapult system that sees your specially designed rockets aimed towards an array of, what are for all intents and purposes, glowing space orbs. There is more to it than that of course, but at its core, this is a relatively simplistic video game based upon a relatively straight forward set of rules.

The problem is, while the core mechanics work just fine and the primary gameplay hook proving highly addictive, it’s the games’ predisposition towards endless chatter and largely unnecessary world building that ultimately turns, G Prime into something of a disappointing slog. Don’t get me wrong, that puzzle-based gameplay does fall into a happy little rhythm eventually, but far too much of the game (especially in the early going), is so eager to tell you about the universe and its characters that you’d be forgiven for thinking that you were playing an RPG.

While there is nothing wrong with a strong sense of place or character, the constant world building forced upon you here feels horribly misplaced. Honestly, if I hadn’t been reviewing this game, I might have turned it off before it even began. Beyond all the unnecessary patter from, Barker, the ships incessantly chatty chief, there are an array of manuals, additional details and a huge number of, again, totally unnecessary screens to get through. The fact that the menu is essentially set out like a desk upon your reassuringly ratty ship, the Ptolemy, si admittedly kind of cool, but the amount of poorly described options available to you feels like overkill.

Beyond the e-manual and additional settings available via the Ptolemy’s visually interesting but technically superfluous menu screen, there is also the option to view the S.W.I.G. menu that not only allows you to check out leaderboards and general progress, but will also link in to the other games planned by developer, Soma Games for their planned ARC Saga. What those games will involve and how they will be linked together by the S.W.I.G. system is beyond me, but for now at least, it’s yet another system for a game that would benefit greatly from a far more streamlined experience. 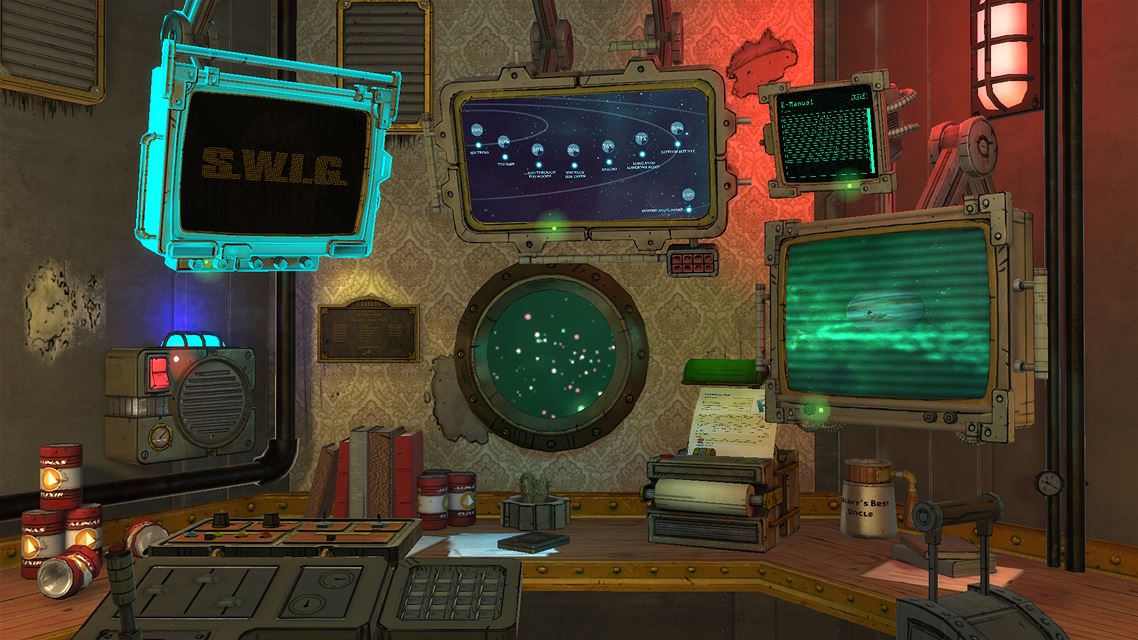 These might sound like unfair criticisms, but it really does feel excessive for what is essentially a very simple game. I’m not trying to undermine it of course – what it does, it does very well – it’s just that, well, a game of this ilk really doesn’t need any story at all, let alone the amount forced upon the player here.

Once you do get to grips with all of those ridiculous on-ship screens and get past all of the rather boring, Barker-based banter, G Prime does eventually reveal itself to be a more than competent space-set puzzler, one that, while basic and easy enough at the get go, soon ramps up the complexity and subsequent challenge as you progress. I’d actually go as far as to say that some will be put off by the games’ myriad of rather brutal difficulty spikes, but for the most part, the sheer addictiveness of that core gameplay should ensure that the majority stick around for the duration.

For those interested in the story, you, after choosing one of ten money hungry corporations to work for, must travel to a new phenomenon referred to throughout the game as, ‘The Rain’. This ‘Rain’, a large expanse of space rich with resources to be mined is essentially portrayed via a selection of glowing orbs that you must track and tag via your selection of sub-etheric reconnaissance rockets. What that means in Layman’s terms is that you need to fire rockets at said glowing orbs across a selection of stages presented on a 2D plain to collect money and unlock further stages across the games’ increasingly challenging sectors

The first of these sectors, as one might expect, is relatively straight forward and basically plays out like an extended tutorial. It’s here, along with all of those bloody e-manuals, that you’ll get to grips with G Prime’s core gameplay. From your ship, you have a set number of SDER Rockets (they are supposedly very expensive, hence the limit), to tag a number of SDER targets by flying through them as accurately as possible and ‘pinging’ them at just the right time. This is done by planning the trajectory, impulse and burn duration of your rocket with the aim of pinging as many of the targets with as few rockets as possible. The closer you get to the centre of each target, the more money you will receive from your corporation of choice. 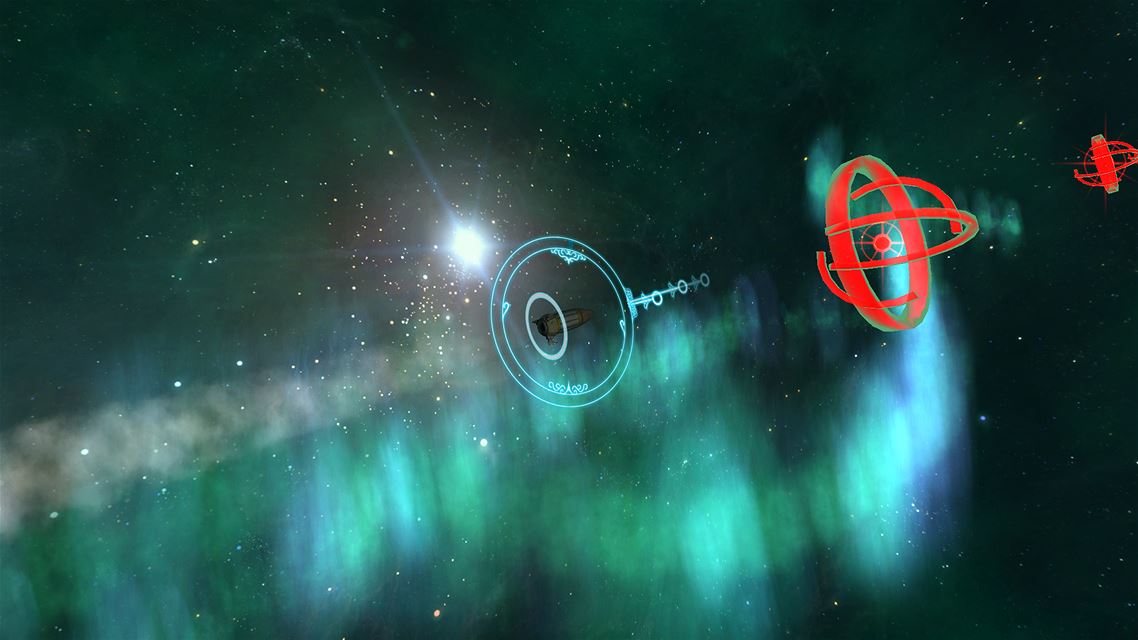 Again, it all starts off easy enough with targets laid out in convenient patterns and little standing in the way of you and your proposed pay day. Things quickly escalate though – once you progress past the first sector, you’ll soon be dealing with gravity distortions, asteroids and any other number of space-bound obstacles. To help you along these more treacherous expanses of space, you are given access to a secondary fire which allows you to make subtle adjustments to your course mid-flight. While this is a useful addition, one that adds an additional layer of skill and depth to the relatively simplistic core mechanics, it is somewhat let down by a camera that is set far too close to the action. Even with the ability to manipulate it on the go, you never really get an idea of where you are in relation to the other SDER targets, thus making successful alterations to your course trickier than they really should have been.

There is plenty of content for those who get hooked by G Prime’s addictive puzzle-based gameplay, but be warned, things get tricky very fast, and once the rocket guide is removed, the difficulty and potential for frustration really does increase. Still, despite some rather nasty difficulty spikes, G Drive is a solid if somewhat unspectacular puzzler masquerading as some kind of character rich space epic. Some will inevitably be taken in by Soma’s commitment to world building, but I suspect that the majority, like myself, will find it all a tad pointless and largely unnecessary. It’s fine having depth for those who want to search it out, but far too often, it feels like the story is being forced upon you in a game in which you will ultimately want to get straight to the action. A relatively simple physics game infused with a surprisingly deep lore might sound like something of an odd mix and, well, that’s because it is. Nothing here is actively bad (most of it is actually very good), but despite Soma’s best efforts, the story and array of additional details simply feel like a barrier to the fundamental gameplay experience.