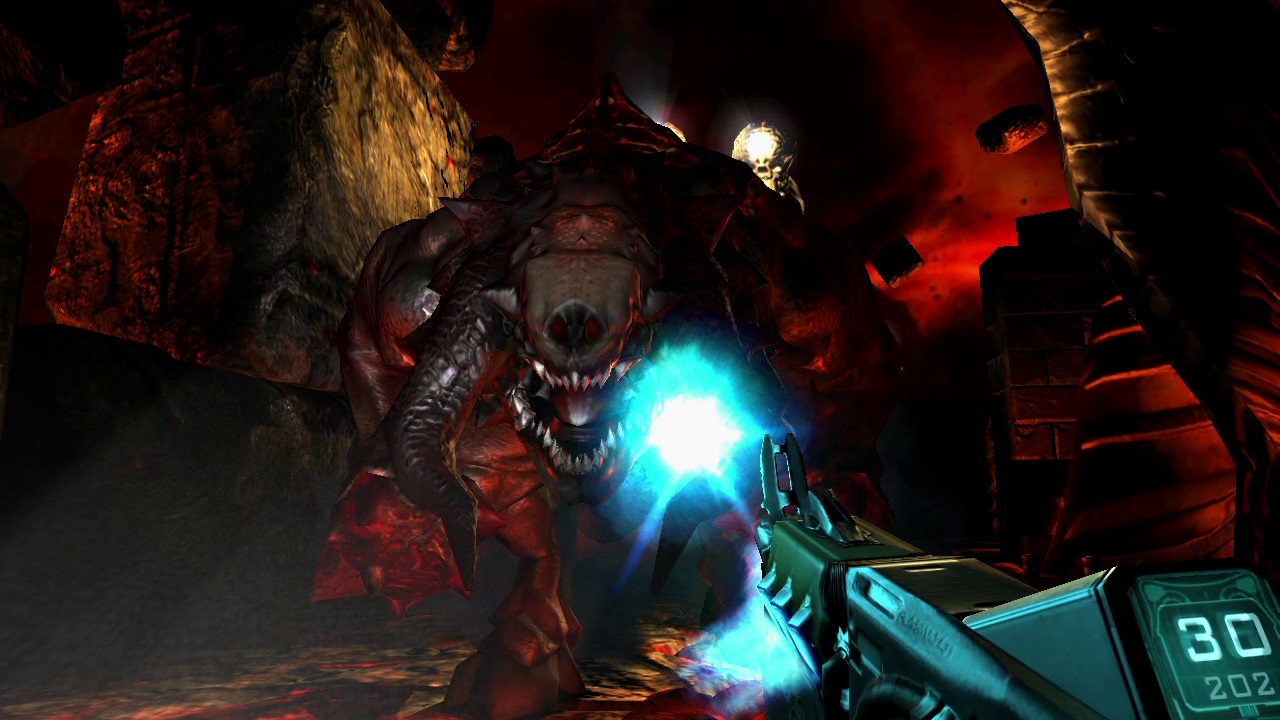 The release of Doom 3 for the Nintendo Switch is honestly the most exciting of the trilogy, and not just because it’s the one that is technically the “newest” in the series (aside from the 2016 reboot, which got a Switch port way back). Doom 3 is, in my opinion, one of the most overlooked games that still holds any weight, and it’s due to the release, the timing, and the treatment. When Doom 3 came out, it was the same year that World of Warcraft dropped and started destroying thousands of lives in a mass epidemic the world hasn’t seen since. It was the time of Rock Star gaining serious purchase with the release of San Andreas as well as the first Red Read game, it was the time of Half-Life 2 clawing at the minds of PC enthusiasts, it was even when Katamari Damacy landed to addict the less serious gaming crowd. So for a sequel that many didn’t keep on their radar to drop almost a decade after the last title (and how much had computers changed in that frame of time), it’s not surprising that it got overlooked. Now, however, is the time for everyone to finally see just what happens when Doom takes a different angle on its own lore.

Doom 3 is both a sequel and a reboot to the Doom plot line, once again taking place on Mars and once again incorporating a lot of ideas about teleportation technology. You’re a space marine who essentially was just hired to be a pilot, but now you’re doing reconnaissance to find a missing scientist while the higher ups fight in front of you and mock each other. After getting used to your surroundings and figuring out where you need to go, the whole base gets rocked by an experiment gone wrong, and, you guessed it, here comes the hellspawn. You have a lot of factors working against you: you don’t really know the layout (though maps and hints from NPCs will help), broken transportation means needing to brave the actual surface of Mars at times, and things get dark, literally, as the lights go out and you’re forced to rely on your flashlight and your careful, cautious hearing to see if death is hiding around the corner or behind that crate. There’s demons, there’s possessed Marines, there’s a BFG and a chainsaw. For everything else, it’s a Doom game. 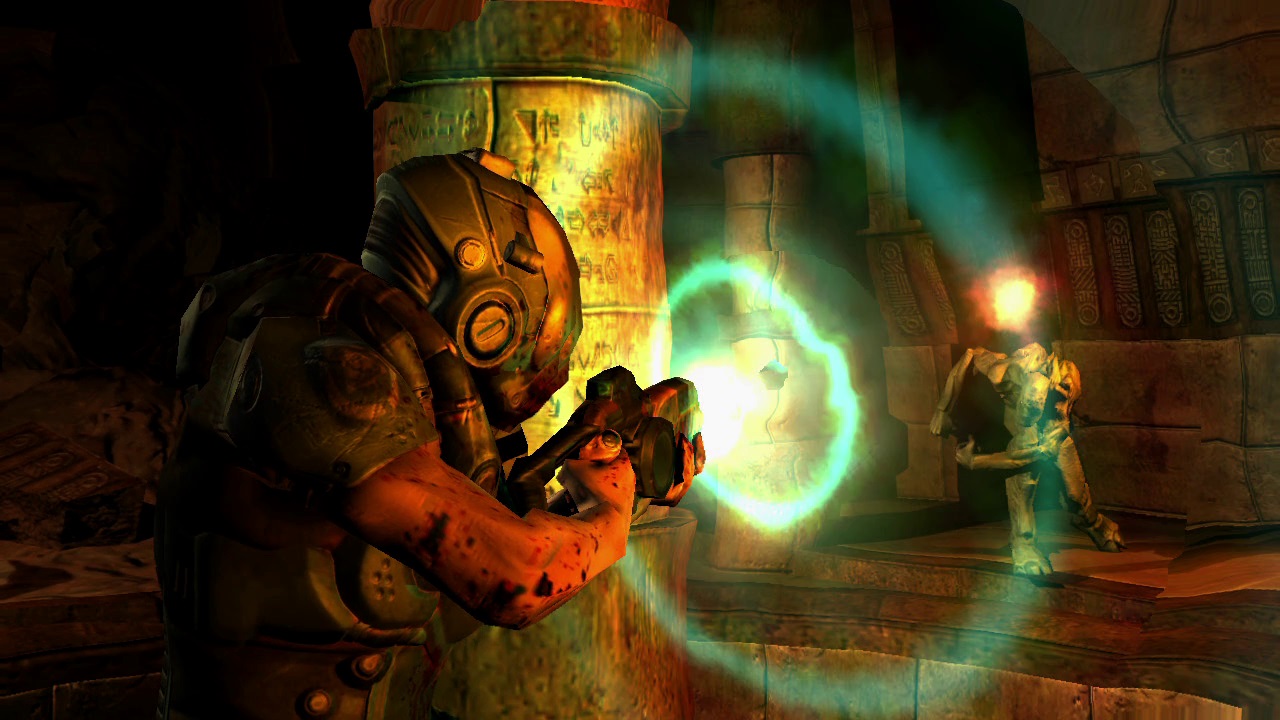 Only…Doom 3 is definitely not a Doom game, not in the sense of the previous two. Doom 3 is very much an atmospheric adventure game, set in the first person and heavily doused in horror elements both with tension and jump scares. Early on, you need to wait, PATIENTLY, as the game sets itself up and a lot of people talk at you. For better or for worse, there are no subtitles available on the game (really wish there were), and you need to listen carefully to what some people say, as they give you clues as to where you must go next and occasionally drop actual codes and passwords that you’ll need for various puzzles. You can also read about them in found journals and notes, and you’ll need to investigate everything if you want to keep moving forward. There are several places where the game stops you and asks you to solve a combination or enter a key code that you will not know unless you’ve been exploring and taking notes, and, sadly, you won’t get those important things if you’re merrily shooting everyone and everything you see like I was doing at first. Yes, you can shoot friendly scientists in cold blood, no, you shouldn’t, because it’ll potentially screw up where you’re going next.

Also, Doom 3 really fluctuates in firefighting as a result of this focus on the storyline (which is decent and carries the game throughout the ten or so hours of main plot line). Far from just running into every single room, guns blazing, you spend a lot more time opening doors, checking all corners, checking behind you, checking above you, backstepping, listening carefully, and still soiling your pants when something jumps out to kill you. A lot of the first half of the game carries a tone more similar to Dead Space than Doom, but that doesn’t make it a bad game whatsoever. Hell, Doom 3 does an EXCELLENT job of creating anxiety and fear from what could be hiding behind each corner or what would happen if you don’t check your full 360 when you venture onward. The mechanic of relying on the flashlight to find your way through truly dark rooms means many a moment of having your spotline shine down on something that is fully committed to eviscerating you, and the circle of brightness is their go signal. If you sincerely want a terrifying play, this is a good title to slap on the headphones, turn off the lights, and lock the doors so that you don’t accidentally scream and throw your Switch at your children when they come home early from summer school.

Players familiar with the iterations should know that Doom 3 on the Switch is much closer to the BFG release of 2012, though without the Doom I and II content included. The graphics are pretty bang up, with some strong looking avatars, well designed interiors and exteriors on Mars, and some grotesque and unpleasant adversaries everywhere you look. It’s pretty surprising just how good the game looks when you realize how old it is, but that’s also why it installs close to 10 GB on the Switch and sincerely isn’t screwing around when it comes to performance and generating heat. Doom 3 looks and sounds like a AAA title that you might see nowadays, complete with the ambient fear soundtrack to help enhance the terror of it all and a butt ton of additional content if you beat the main storyline. Being able to have Resurrection of Evil and The Lost Mission baked in easily adds another four hours to the overall gameplay (maybe more), and, since this was built with newer shooters in mind to emulate controls and appearance, newcomers will find better purchase with Doom 3. Being able to walk with one joystick and aim with the other will be second nature to most everyone who’s done console FPS previously. Panic Button is really showing their skills with these ports, and I hope to God they continue to deliver at this same level with their future works, because they really do make great PC games work on the Switch. 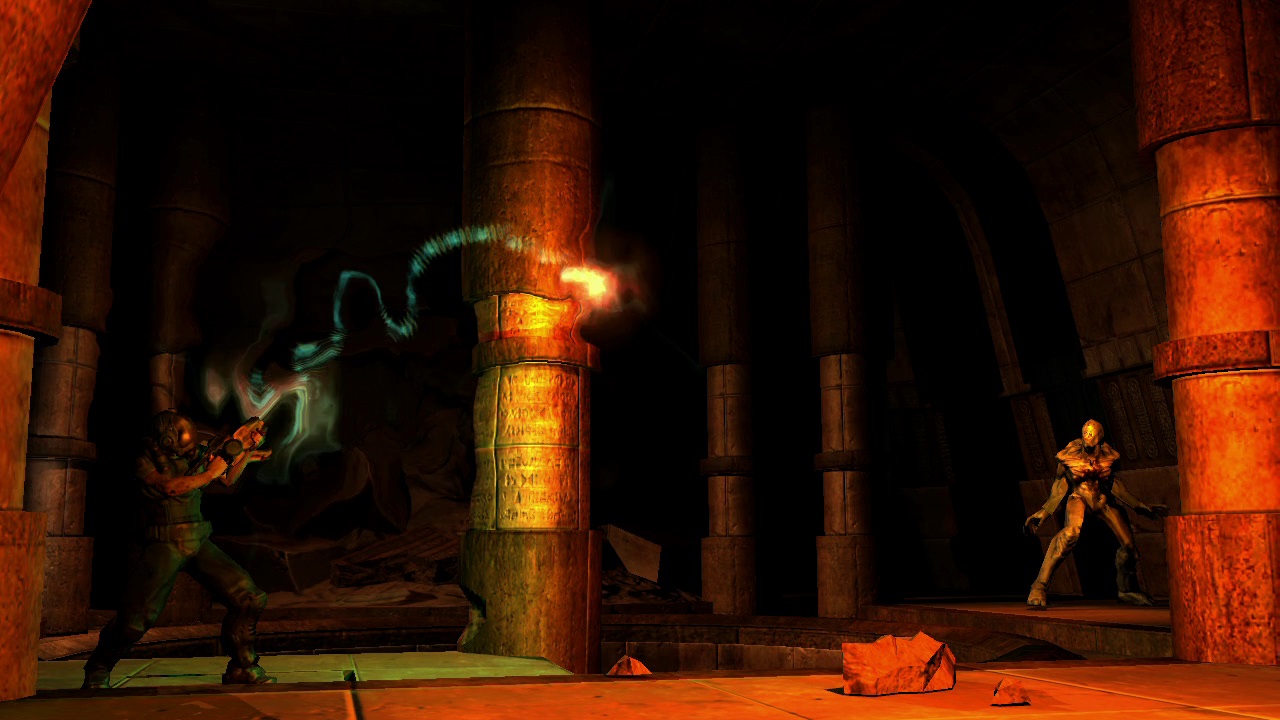 Now for some bad news. Doom 3 does not, at the current time, support multiplayer, local or otherwise. This might come as a shock after the last two Doom releases had local, but Doom 3 is a solo endeavor at the time of this writing. Which is just fine IF you know that Doom 3 is a single player adventure that’s more story driven and horror framed than the other two games. But it’s still a minor disappointment because the death matches and fragfests of Doom and other id Software games is what drove their success and enjoyment in larger groups. By taking that out, you’re left with a Doom game that isn’t truly a Doom game (compared to the others) and isn’t even like the oddball but enjoyable Doom RPG titles. It’s a horror adventure game, rife with scares and some great moments, and yea, it packs plenty of the Doom spirit, but it’s still quite a far cry from the last two entries. So, if you’re picking it up, please know that you’re getting the game for YOU and only you.

Having said that, you should still pick it up. Doom 3 is a fantastic jaunt, full of impressive design, great puzzles, balanced with cheap scares and genuine fear moments, and everything that’s important for the solo campaign is here. At ten bucks, this wasn’t even a thought, this was just a buy, and it runs fantastically on the Switch with nothing that you have to give up in turn. If you’re at all interested in seeing the end of the original Doom trilogy and what can happen when you change up the script of Mars just a tad, Doom 3 is the way to go.