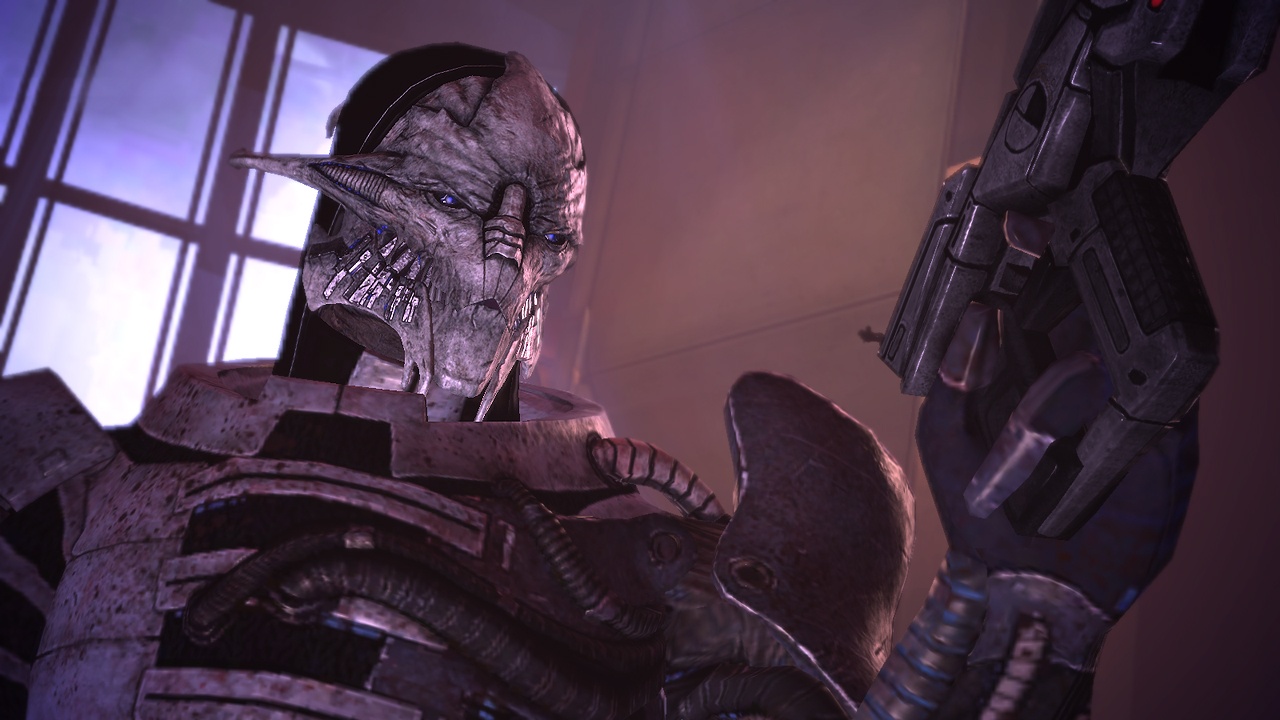 I’m not usually the kind of gamer to play through a videogame more than once. With so many great titles on the shelves and so little free time to spend on this most splendid of hobbies, I find it hard to justify playing through a game for a second time when there is such a vast selection of potentially fantastic games waiting in the wings. Other than in the case of a handful of stone cold classics, I tend to move onto the next game in my ever increasing “to play” list as soon as I see the end credits. In the case of Mass Effect 2 though, well, let’s just say I was happy to make an exception. Having played through, and loved every minute of Bioware’s exemplary Mass Effect 2 when it was released on 360 last year, receiving a copy of the PS3 release for review provided a more than welcome excuse to once again delve into Mass Effect’s rich, beautiful and wholly believable universe.

Although little has changed for the PS3 release short of a few barely noticeable graphical upgrades (and downgrades) and a bundling of all of the 360’s DLC into one package, for any PS3 owner with any kind of inclination towards RPG’s, third-person shooters or simply sci-fi in general, the admittedly belated release of Mass Effect 2 should be nonetheless welcomed with open arms. Make no mistake, even in the extremely fast moving videogame market, a year after its initial release on 360, Mass Effect 2 still stands as one of the finest games of this generation. Whether you’re playing it on 360 or PS3 doesn’t really matter at all. What matters is that you’re playing it.

For those who have been living under a rock for the past year, Mass Effect 2 continues the story of Commander Shephard and the ever changing crew of the Normandy space craft. Playing as some kind of RPG/third-person cover-shooter hybrid, Mass 2 is a game that revels in giving the gamer the choices to play out the adventure how they see fit. From the wide ranging character classes to the influential conversation wheel, Mass Effect 2 allows you to choose your approach to the game from both a technical and character standpoint.

This level of choice was further underlined on the 360 version by allowing players to import their save files from the original game. This meant that decisions made in the first game would then affect certain events throughout the second. While this is obviously impossible for the PS3 release, a clever work around has been achieved in the form of a downloadable interactive comic that provides a brilliant summary of the first games events while also allowing the player to choose the actions that Shephard makes at specific points throughout the story. While it certainly won’t provide anywhere near the same experience as actually having played through the first game, it is a somewhat ingenious way to set gamers new to the Mass Effect universe off on a unique course of events.

Starting off on the very dark note of Shephard’s apparent death, the reasonably generic story – one that shines thanks to some fantastic writing, a brilliant cast of characters and some truly outstanding delivery – really gets going when you are appointed Commander of the new and improved Normandy. From here you are tasked by the aptly named, Illusive Man (brilliantly voiced by Martin Sheen) to put together a team capable of taking on the mysterious threat posed by the Collectors.

While a simple enough premise on the surface, the pro-human stance of the Illusive Man’s Cerberus network and the underlying conflicts between races, beliefs and the overriding sense of what must be done drives the story in many interesting, often extremely exciting directions.

Further enhancing Mass Effect 2’s stellar story is the games eclectic cast of characters. While the majority of NPCs you meet along the way prove consistently memorable, it is the elite crew that you put together in the aim of taking on the Collector threat that really pushes the story and the Mass Effect universe as a whole onto the next level. A combination of impeccably detailed back stories, individual, cliché free characteristics, some genuinely fantastic scripting and the yet to be bettered facial animations all combine to make Mass Effect 2’s immediate cast one of the most interesting, believable group of characters to ever grace a videogame.

Although ploughing through the core story missions won’t take you too long, it is the raft of side stories and sub-missions that greatly expands both the experience and the universe that make Mass Effect 2 the truly fantastic experience that it is. There may be a handful of duds (a stealth mission in a nightclub stands out as being one of the few decidedly pants missions on offer), but the majority offer up some very intriguing yarns, taking the game’s overriding story off on some very pleasing tangents and allowing for a few moments of relatively light-hearted storytelling amidst all the doom and gloom of the core quest. 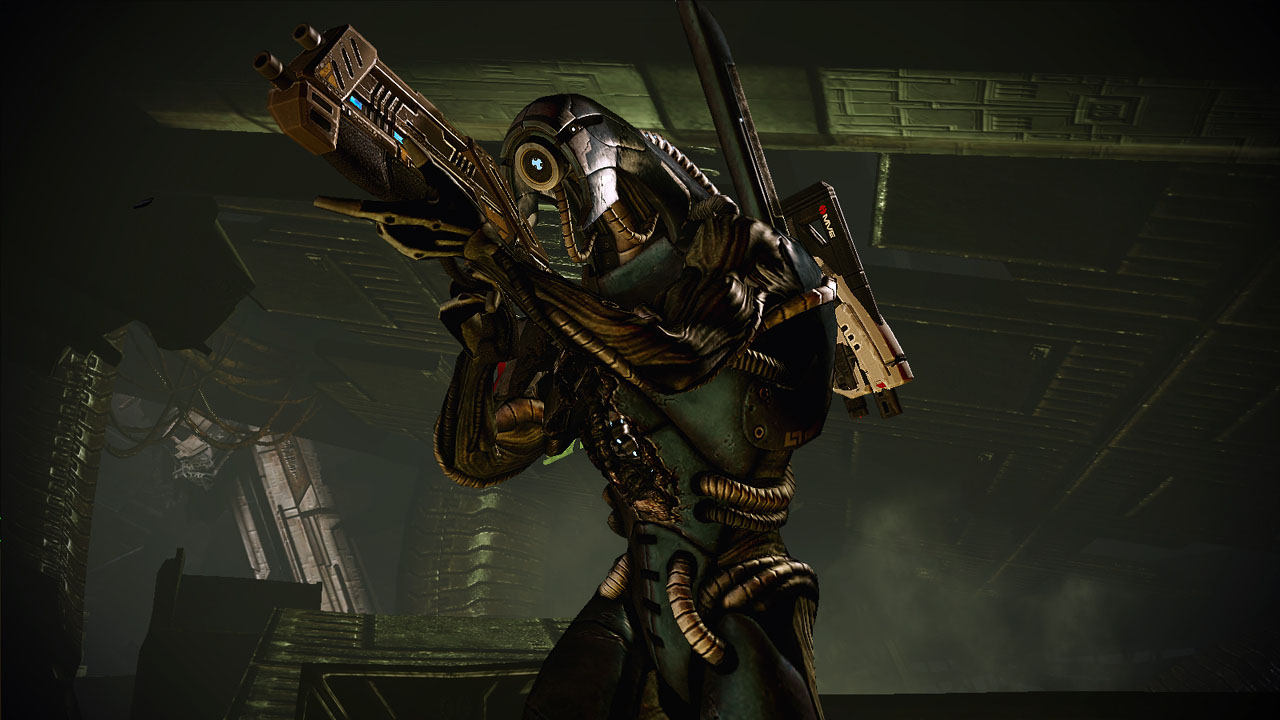 While the majority of missions revolve around the games core cover-based shooter mechanics, thanks to some vast improvements over the original and the freedom that the class system allows, the action based elements of Mass Effect 2 never fail to entertain. With 6 classes available and a degree of customisable control over the unique skills that each class allows, taking down your enemies is often more varied than the standard popping out of cover and bustin’ a cap technique that so many standard shooter employ. At its most basic, Mass Effect 2’s action isn’t in the same league as the Gears of War’s of this world. But with the extended abilities that the game offers combined with the simple but intuitive squad command skills, Mass Effect 2 delivers more than enough quality and choice to work on the level of a basic cover-based shooter. Mass Effect 2 is so much more than that though. While the excellent combat drives the story forward, it is the interactions, beautifully realised locations, outstanding storytelling and overall scope that will stick with you long after the credits roll.

Despite the fact that there is very little wrong with Mass Effect 2, one potential bone of contention may stem from the level of traditional RPG development allowed. Although both Mass Effect 2 and its predecessor leaned more towards the action end of the spectrum, Mass Effect 2 does simplify some of the options that were available in the original. While many would argue (myself included) that this streamlining successfully keeps the emphasis on the story and characters rather than having constant trips to the menu screen potentially break up the immersion, for those who like to get involved in the more minute aspects of character development, Mass Effect 2’s somewhat simplified options might leave you vaguely disappointed.

PGThat’s not to say you can’t get involved of course; beyond the class choices having a potentially dramatic effect on how you approach the game, there are still numerous upgrades to be purchased and many new armour pieces and weapons to be found. While there certainly aren’t Fallout levels of customisation available, what is here delivers more than enough choice to successfully balance the overall experience comfortably between cover-shooter and RPG conventions.

On top of the choices provided by the basic RPG elements of the game, the outstanding conversation wheel returns for Mass Effect 2 and its better than ever. The renegade/paragon character development options also return but with a stronger emphasis on moral grey areas, making ethical choices and developing your character specifically toward the paragon or renegade end of the character spectrum isn’t quite so obvious this time around. To add more immediacy to these options, interruption triggers have also been added to certain points of the adventure. These task you with making split second decisions in the middle of conversations, decisions that will not only have potentially major repercussions but will also affect your ethical character development – believe me, it’s genuinely interesting to see what choices you make when you don’t have time to think it over (turns out, I’m quite an unpleasant person).

From an audio/visual standpoint, Mass Effect 2 has very few peers. Beyond the aforementioned superlative voice acting, Mass Effect 2 is home to a genuinely outstanding soundtrack and some of the finest visuals of this generation. While the peerless facial animations have obviously, and deservedly, reaped a great deal of praise, it is the art design that often sets Mass Effect 2 out as a genuinely special piece of sci-fi entertainment. Be it in comparisons to other games within the industry or the finest examples of movie-based sci-fi, Mass Effect 2 and its universe stands up proudly in comparison to the finest examples of science fiction entertainment. While certainly impressive from a technical standpoint (it’s a huge step up from its predecessor in terms of refinement and polish) it is the artistic imagination on display that will consistently draw your attention – from the myriad of beautifully crafted worlds and their often unique inhabitants to the little touches of creative brilliance found throughout the game, Mass Effect 2 is never anything less than a treat for the eyes. 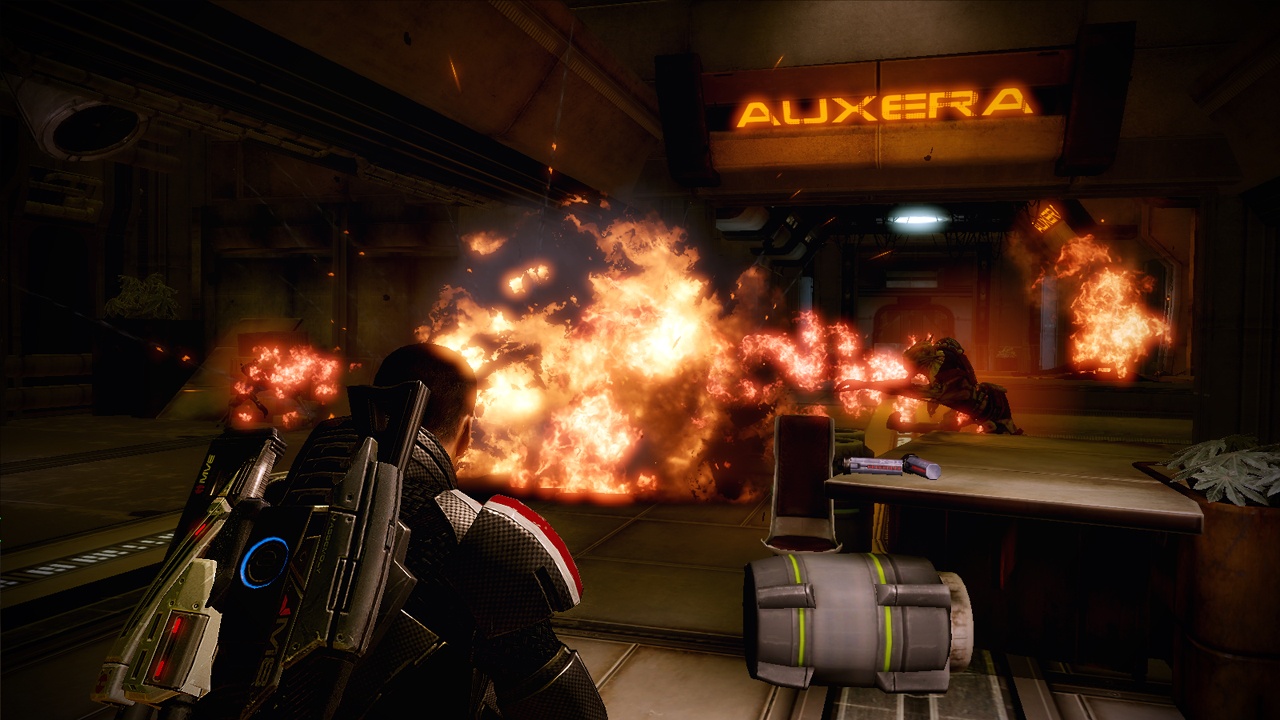 In terms of the obvious comparison between the PS3 version and the original 360 release, well, there isn’t really much between them and certainly not enough to make choosing one over the other a major decision. While the 360 version probably just about edges it thanks to some shorter loading times and fewer technical issues, the PS3 does benefit from slightly smoother visuals and of course the inclusion of all three major pieces of DLC. While the Kasumi – Stolen Memory isn’t likely to blow you away, the consistently fantastic Overlord and Lair of the Shadow Broker missions are hugely welcome additions to the package and add a good 6 hours of extended gameplay to the original release.

PlayStation 3 owners have had to wait a year to get their hands on Mass Effect 2, but believe me, it’s been worth the wait. While not a technically perfect port, the PS3 version, like the 360 release before it, stands as a wonderful example of what can be achieved within the videogame industry. The action is exciting, the RPG-lite upgrading is hugely addictive and the art design is often unforgettable. What really sells Mass Effect 2 as something of a masterpiece of modern game design however is the consistency of its universe, the richness of its characters and the game’s ability to pull you into its world for hours on end. Not every aspect of Mass Effect 2 may be perfect but as a complete package there is very little out there that can compare.