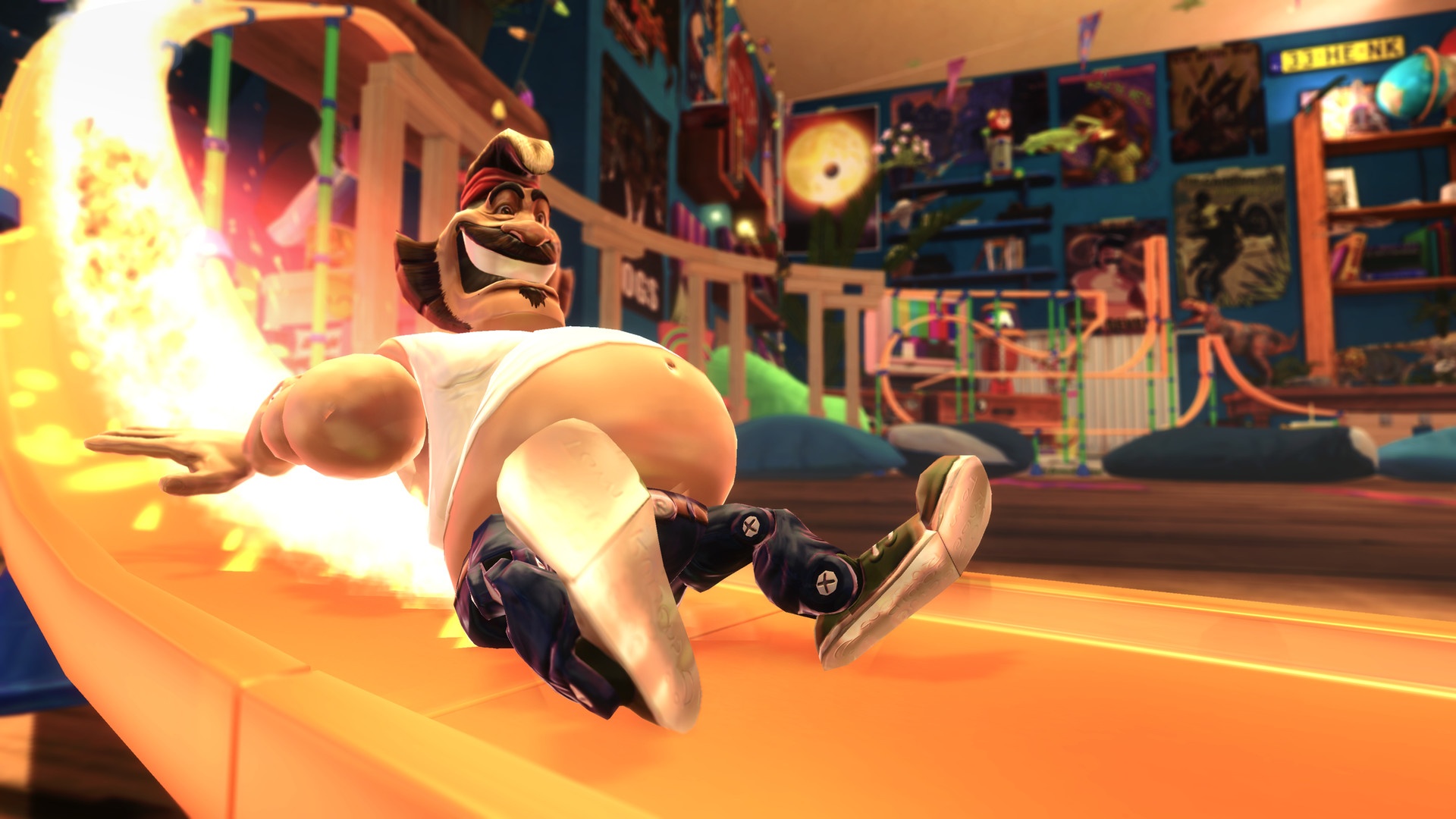 Just one more go. It’s a lie we tell ourselves time and time again while playing games of a particularly addictive nature. It’s never one more go and Action Henk knows this. Developed by RageSquid, it’s this mantra that transforms what would be a relatively run-of-the-mill platformer into an enslaving experience, albeit one we’ve seen done before a hundred times over.

Action Henk is an action figure who has seen better days. Discarded in favour of newer toys, he has become a pot-bellied slob with nothing but a trophy to remind him of his former glory. Now that trophy has been stolen from him and if he’s to get it back, he needs to prove his worth on the race-track, competing against rival toys out to steal his place in the spotlight. As the game progresses, the story becomes less coherent, but it does the job setting the scene and by the time you’ve rattled through a few levels, it’ll become completely irrelevant altogether.

Despite sporting an impressive beer gut, Henk is all about the need for speed. In order to win each race, he must make it to the finish line within a set-time limit, all while navigating the various pitfalls housed in each level. Butt-sliding down ramps, scrambling up walls and making death-defying leaps are all in a day’s work for this ageing action star but if he’s to keep his momentum up, then he must time his movements with razor-sharp precision in order to achieve a spot on the winner’s podium. 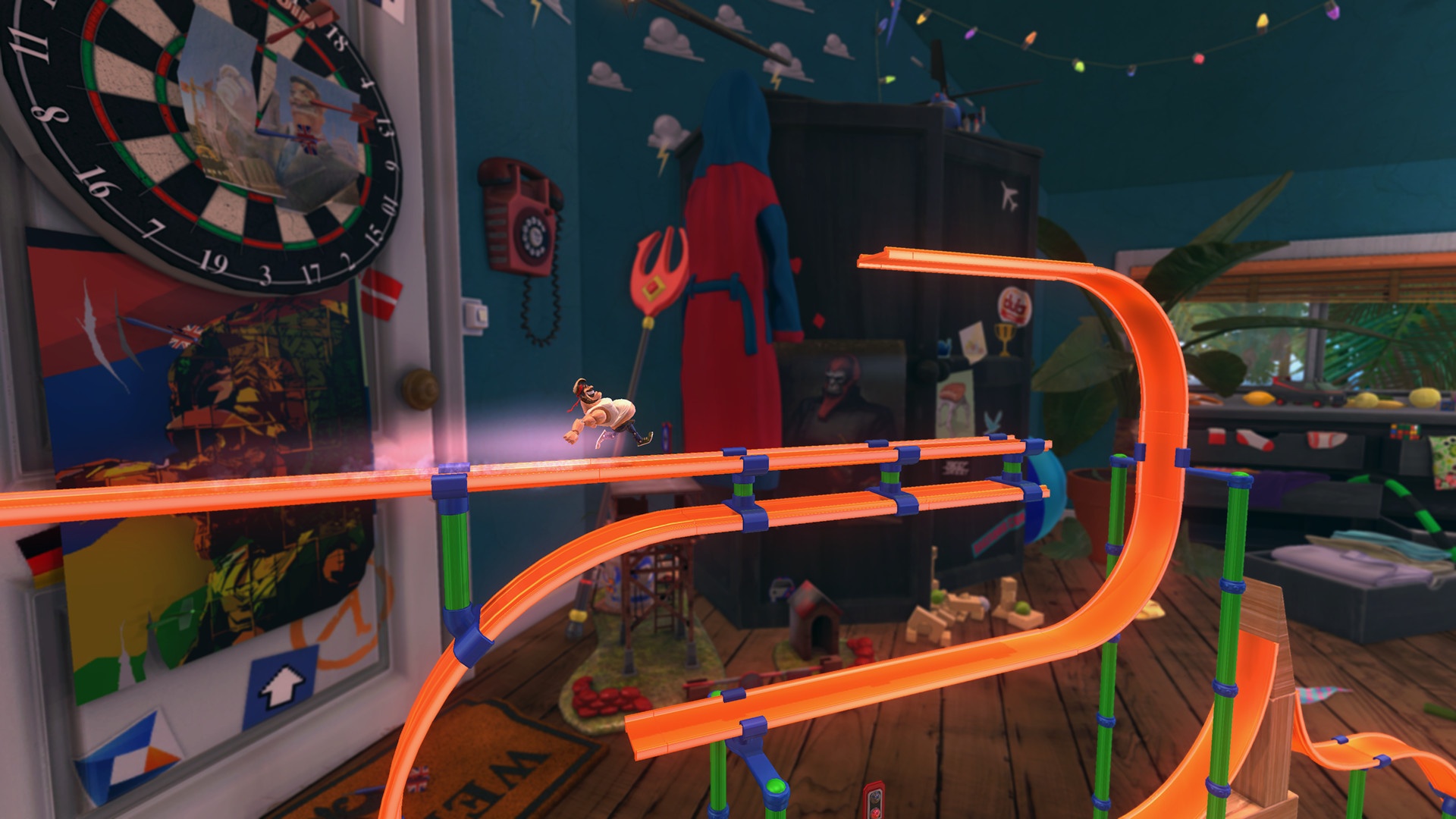 The gameplay closely resembles that of the physics-based motorcycle racer Trials HD. Henk’s sliding manoeuvre will help build speed when going down ramps but will slow him down if the track takes an upward turn. Jumps can be extended by holding down the A button, but this further reduces momentum. It all comes down to timing and while an early leap or sliding an extra few meters might seem beneficial in the short-term, it can ruin your propulsive speed later on in the level.

To keep track of how you are doing, each race will display the ghost of the opponent who set the time record to begin with. For particularly troublesome levels, it’s worth keeping an eye on what these ghosts are up to and where they falter in their run, so that you can take advantage of the situation and steam ahead at the most appropriate place in the level. If you fumble or find yourself lagging behind, a quick tap of the B button will reset the race. It’s at this point Action Henk stops being a bit of fun and turns into a frustrating obsession.

This works in the game’s favour, keeping you hooked until you’ve mastered one segment of a level, only to introduce a whole new set of problems later on down the track. The addition of a hookshot later in the game adds a surprising new twist to proceedings, but timing your swings and dropping precisely over platformers only adds to your headaches. Shaving off a half second here or there makes all the difference to the outcome of the race but Action Henk is a glutton for many things and unfortunately for the player, that includes punishment.

Levels are broken down into a number of different areas, all themed around the toybox and beyond. Each area has plenty of levels to keep you entertained, but unfortunately their layouts and styles all strike as being very similar. Combine that with the constant need to retread old ground and soon you’ll be chomping at the bit to open up the next area, provided you’ve won the right amount of medals. At the end of each area, there’s also a boss race where you’ll race against an actual competitor as opposed to their ghost. Tricky as these levels are, they add much more to the core gameplay, aside from unlocking a new character to play with if you’re tired of watching Henk’s belly wobble back and forth to the upbeat eighties-inspired techno music in the background. 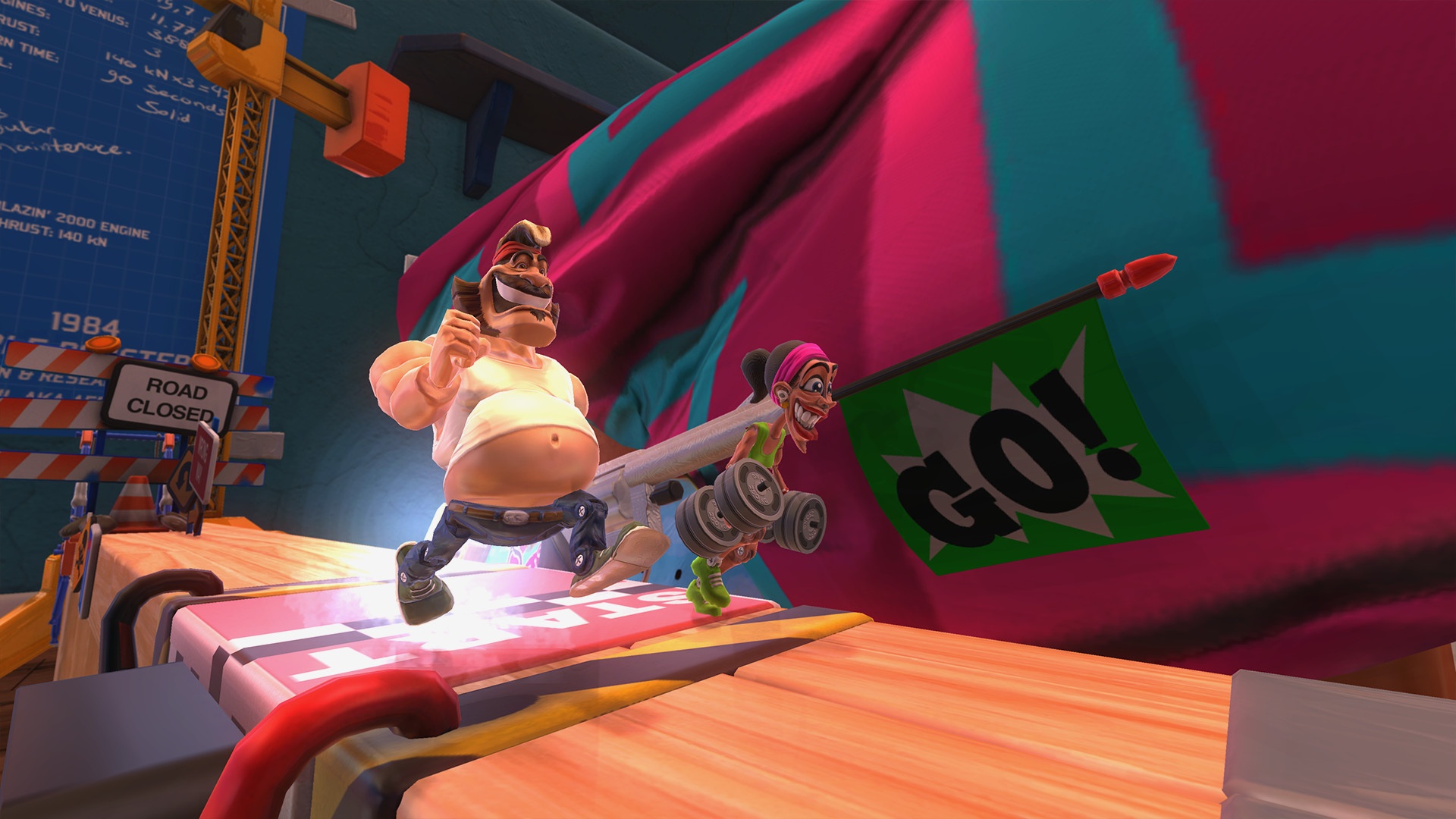 In fact, many of the other characters are even more grossly deformed than Henk. It seems like an odd visual direction, particularly for a game based in a child’s bedroom. Adding further confusion to the aesthetics are some of the later levels, which completely disregards the concept altogether. There are some fun little Henk-flavoured nods to pop culture lurking in the background, but soon all of this becomes irrelevant when the gameplay takes a hold and all that matters is winning the race. The only time the visuals matter is when they’re not working in your favour and unfortunately for Action Henk, that happens quite a bit. Frame rates can fall whenever the backdrops get particularly busy and for a game that relies on precision, it’s a rather annoying fault.

Making the most out of it’s time trial experience, Action Henk also includes leaderboards which will be updated after each race to include your score. If besting the in-game competitors wasn’t enough, you’ll also see your time ranked alongside other players, providing you’re connected online. There’s also a local multiplayer mode which sees two players compete while the camera zooms in until one of them falls off the edge of the screen. It makes for an easy to pick-up-and-play experience that is fun in short bursts.

Action Henk may lack the visual appeal of the games it aspires to be, but underneath is a surprisingly addictive experience that certainly extends the life of the simple idea it has been built upon. Featuring some decent platforming physics and an inviting world to explore, your frustration will come and go in frequent measures as you mutter to yourself “Just one more go” time and time again.