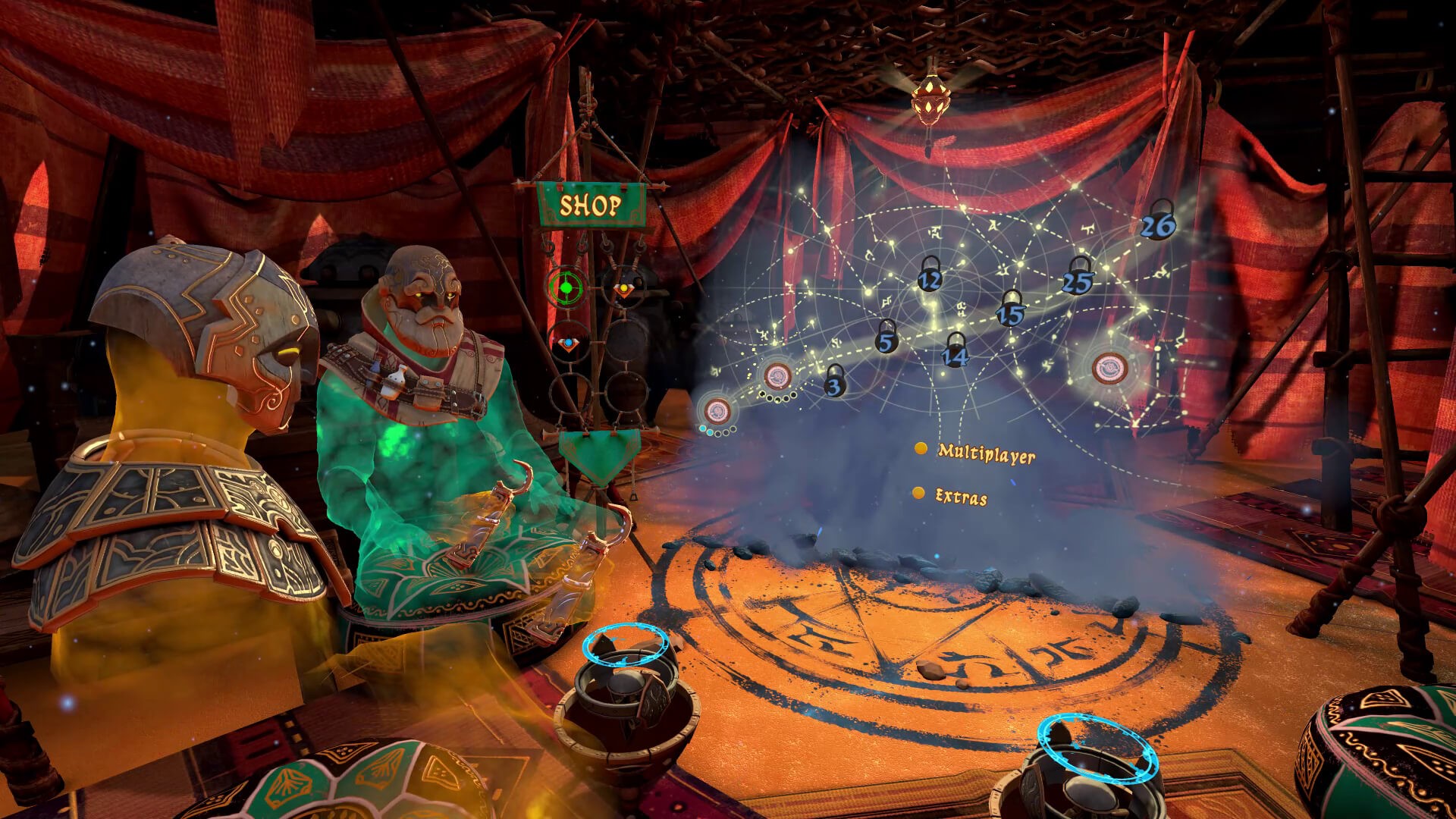 One of the great and unexpected bonuses of VR has to be the fact that innovative titles that may never have seen the light of day on a flat screen, are now able to find a home with a mainstream audience. Just five years ago, games like Stardust Odyssey would have struggled to move from storyboard to production schedule. The reasons for this are among the reasons that make Stardust Odyssey such a unique offering. Melding together genres like a crazy chef,  Stardust Odyssey is a mix of first person shooter, stealth and strategy. Oh, and with a lot of driving/steering thrown in to boot.

The brainchild of Agharta Studio – those of Steam Crew fame – the premise of Stardust Odyssey is a difficult one to get your head around. It’s set in an undetermined future date where the world (or worlds) are filled with huge floating ships. Most of the ships are cargo vessels and your job is to steal as much of their cargo as you can. As all of the ships, including your own, are going in the same direction (just forward), you’ll be navigating by going up and down, left and right. Imagine the Silk Road in the era of Khan and you’re half way there.

To plunder a ship you simply float alongside or behind it and hold down a button on your controller. A circle is created around its cargo which then disappears and reappears in your cockpit. This Silk Road in space is protected by flying robot guardians programmed to intercept and destroy looters such as yourself. If you play the game wisely, you’ll be able to avoid some confrontations by flying beneath a nearby ship or placing a vessel between you and the guardians so you won’t show up on their radar. However, for some of the fights you can’t avoid, Stardust Odyssey can become a frantic, white knuckle ride. More on this later. The good news is that the more booty you loot, you’ll be able to upgrade your ship and improve its storage, defence and offensive capabilities. Exploration is definitely encouraged in Stardust Odyssey as you have to find mysterious objects called ethers that will help you unlock new levels. You’ll also be able to revisit previous levels to hunt for more goodies, which adds to the games re-playability. 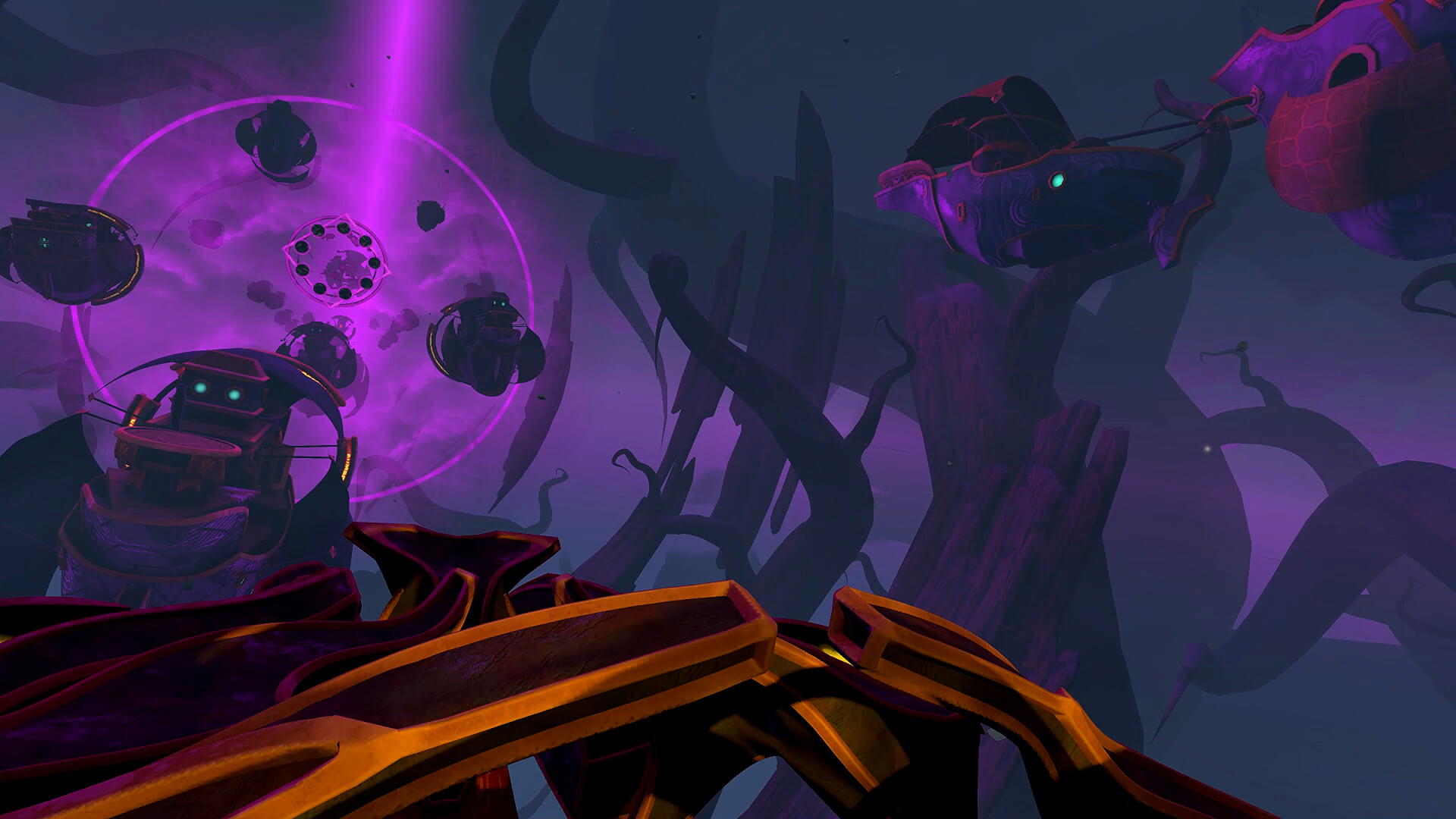 Oddly enough the story in Stardust Odyssey seems to be the least developed part of the game.  In a nutshell,  your job is to stop an unscrupulous villain called The Alchemist who seems to be intent on seizing power for some dastardly plot. And the only way you can get to The Alchemist is to steal as much cargo as you can. Or something like that. The truth is that Stardust Odyssey is, at its heart, an arcade shooter and the plot serves as a link to chain together a series of unforgettable encounters.

During the early stages of Stardust Odyssey you’re walked through a pretty quick tutorial which mainly deals with the mechanics of piloting your ship and pointing your controller at a nearby cargo vessel in order to pilfer its booty.

As I mentioned earlier Stardust Odyssey is a virtual potpourri of genres. So, as you work your way through the levels, you’ll often find the stealth element suddenly replaced by hectic battles during which you’ll have to steer your ship, defend it with blue orbs and, using yellow orbs, shoot several guardians out of the sky. After each level is successfully complete, you’ll return to a tent that looks as though it’s been taken straight out of Prince of Persia and from there you can choose a new level to play or purchase strategic upgrades from a strange Gini-like trader.

It’s fair to say that Stardust Odyssey is probably one of the most visually stunning games we’ve played on PSVR for a very long time. The first time you’re thrown into this mesmerising world of strange and hauntingly beautiful floating ships, you’ll find yourself gasping and shaking your head in disbelief. It really is that gorgeous. This is pure VR eye candy and I suspect you could gain weight just from looking at it. 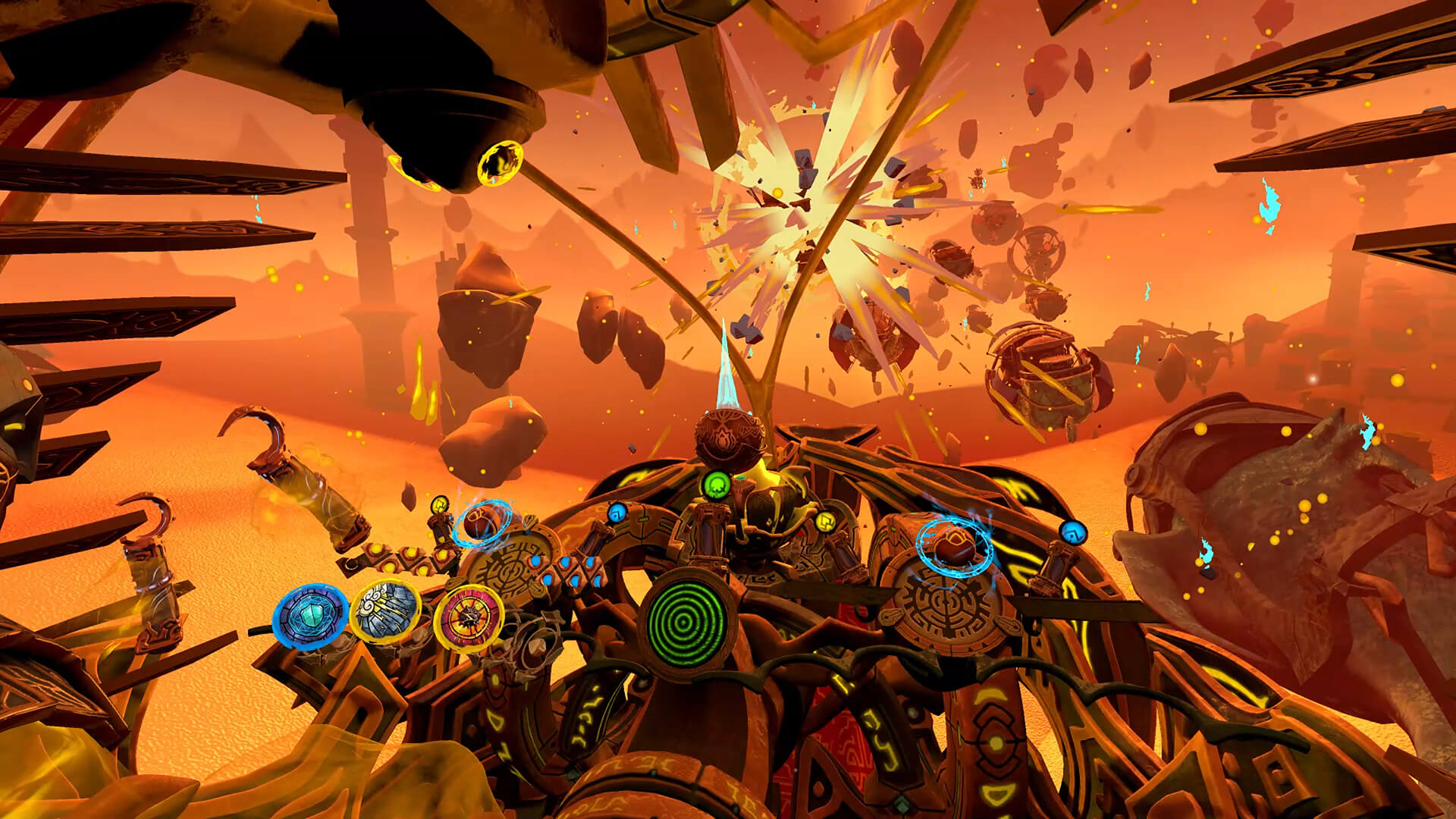 Control wise, Agharta Studio have done a remarkable job of making the move controllers almost seem as though they were designed just for this game. You can steer the ship with either the right or left controller and just dipping in one direction is immediately translated to what you experience on your ship. Pull forward on your controller and your skiff slows down. Push your controller back and you speed up. Take your hand off the steering orb and you’ll match the speed of the nearest ship. Genius.

There were, however, a few minor niggles that may prevent Stardust Odyssey from becoming an out and out system seller. The first was something I hinted at earlier: The controls and the UI. With your looted booty being transported in front of you before vanishing into your hold, and the fact that you have to steer the ship as well as defend it and shoot at the guardians, I often felt overwhelmed by how much I had to do at the same time. On reflection I realised that this could be because Stardust Odyssey may have originally been intended as a multi-player co-op game.  This is evident by the fact that the cockpit of your ship (Ok, I know that’s not the right phrase) has a place for two people rather than just one. And, when you return to your tent, there are two places to sit and choose your level and upgrades and you’re sitting in just one of them. With two captains sharing the steering, defending and shooting, I suspect that Stardust Odyssey would be a breeze. But when you’re doing everything by yourself, it can get a little frantic.

It’s also worth noting that, although most of the guardians are easy to pick off, the boss battles in Stardust Odyssey can be tougher than a bear armed with a flick knife. The other very minor gripe I had was the fact that the game world in Stardust Odyssey is so beautifully created that I really wanted to do more than just steer my ship, loot and fight. I wanted to dock and perhaps meet fascinating NPC’s. I wanted to visit the markets and perhaps interact with other players. I just wanted more. These two niggles aside, Stardust Odyssey is without a doubt a huge triumph for Agharta Studio and a great example of what creativity and imagination can achieve on the PSVR.  If anyone has ever questioned your decision to shell out for a PSVR unit, just give them a few minutes with Stardust Odyssey and they’ll understand. Go buy.

Stardust Odyssey is a great example of what creativity and imagination can achieve on the Playstation VR.