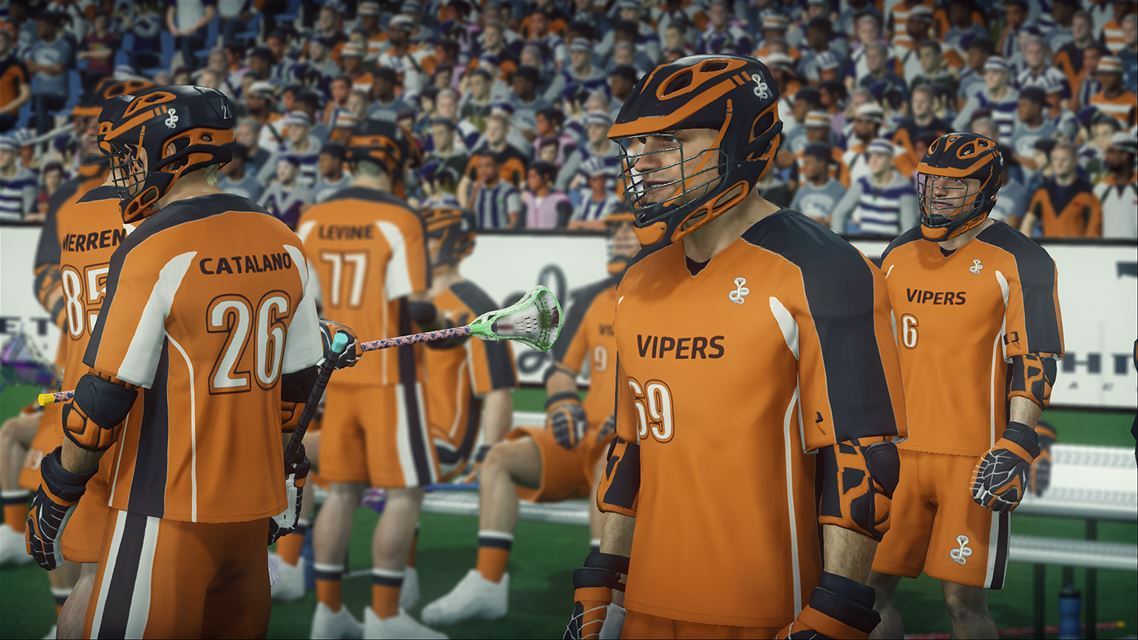 Powell Lacrosse 16 is actually a very good sports game. It delivers with emulating the sport well. The physicality of it, is what shines for me though. For those who are not familiar with Lacrosse, think of it as a mix of Soccer and Hockey with a bit of American football thrown in too. The nets are small like that of the game of hockey the sport is brutal like that of the game of American football and its played on a pitch about the size of a soccer pitch. Each player has a lacrosse ratchet and the aim of the game is to score in the opposition’s net which is guarded by a goalkeeper.

Winning possession is called a turn over and the start of a match has you contesting for possession in a one on one scrum with a series of button presses. The controls are a little over whelming to start with as there are a lot of button combinations. The game tries its hardest to help you by having an indicator over the players head on what combination you should press however. Shooting in the game is one of its major flaws. You shoot with the right stick and at times it just felt like all I had to do was just move the stick in any direction and it would go towards the goal I never really felt in control of my shot, goalkeepers at times would just be unstoppable and other times would be terrible it’s just plain unpredictable . 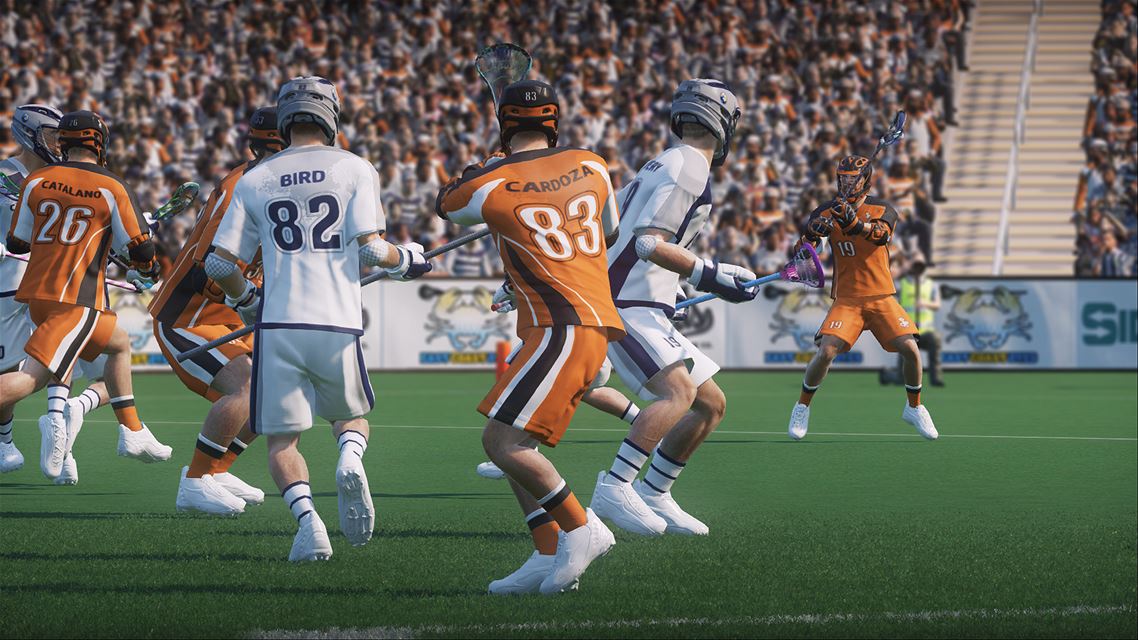 The Ai is also a bit hit and miss too. At times my team mates hindered my efforts more than helped and I found myself getting all tangled up when trying to switch the player I was controlling. Passing is executed with the R2 button and this is actually done quite well I felt quite in control of the range of the pass and my team mates usually received the pass, you will find yourself passing the ball a lot as if you try to go on a mazy run you will get crunched.

Tackling is another thing that takes some practise to crunch them you can hold the R3 button down and charge in the direction of the opposing player this is pretty hard to execute but when you do man it’s satisfying.

The thing you have to remember is this was a game built on a budget and it kind of shows. When you first start-up the game it prompts you to download a roster created entirely by the community. Which is a really nice touch, more sports games should have this option that cannot get all the licenses to players or teams for example Pro Evolution Soccer.

So I will now get into the create mode, the create modes are really solid and is actually one of the game’s biggest strength’s. You can customize anything pretty much even the stitching on your lacrosse racket. You can even create an entire custom team with friends from real life if you so wish and take them into the career mode which I will get to in a moment. 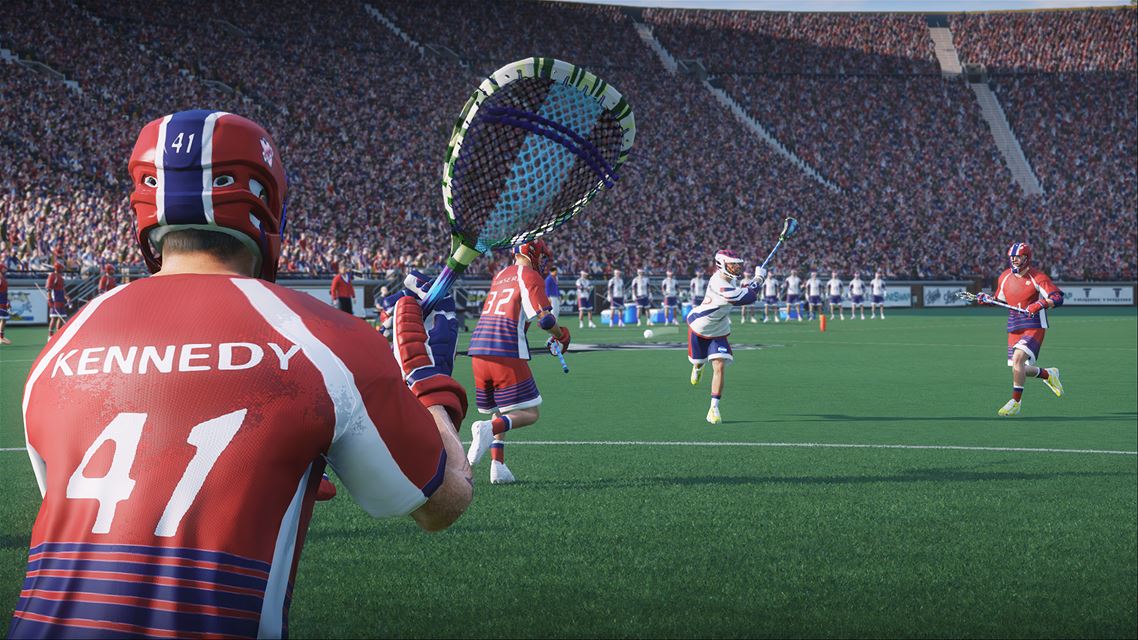 The career mode is pretty much your straight forward play A 18 game season, getting promoted and getting drafted and becoming a professional player. You can choose to start out in the college leagues or you can start pro straight away. You also get the option of either playing as just one player or an entire team or even just been a coach, which is pretty cool.

The graphics and presentation overall in the game are really good considering the game was made on a budget. You can see every grain of grass and players look realistic enough. I did notice some very minor clipping with animations but that’s nothing a simple patch cannot fix. Commentary as far as sports games go rarely gets repetitive or dull. Both commentators sound enthusiastic about what’s happening on the pitch and it gives the game the kind of atmosphere you wish the crowd did. Sounds from the crowd often loop and it can get a little irritating after hours of play time. In different stadiums there are more crowds than others and to be fair this is reflected with the sounds coming from the stand which is a nice touch.

Overall Powell Lacrosse 16 is a very decent sports game. Yes it has its flaws but for the first entry in a franchise it manages to emulate and rejuvenate a popular sport in America it does little wrong in that respect. It could have more depth to the career mode and the controls could be somewhat a little easier to understand but fans of Lacrosse and casual gamers would find something to enjoy here. With a price tag of 50 Dollar’s however it’s maybe a little steep to warrant, if you are not a fan of the sport.