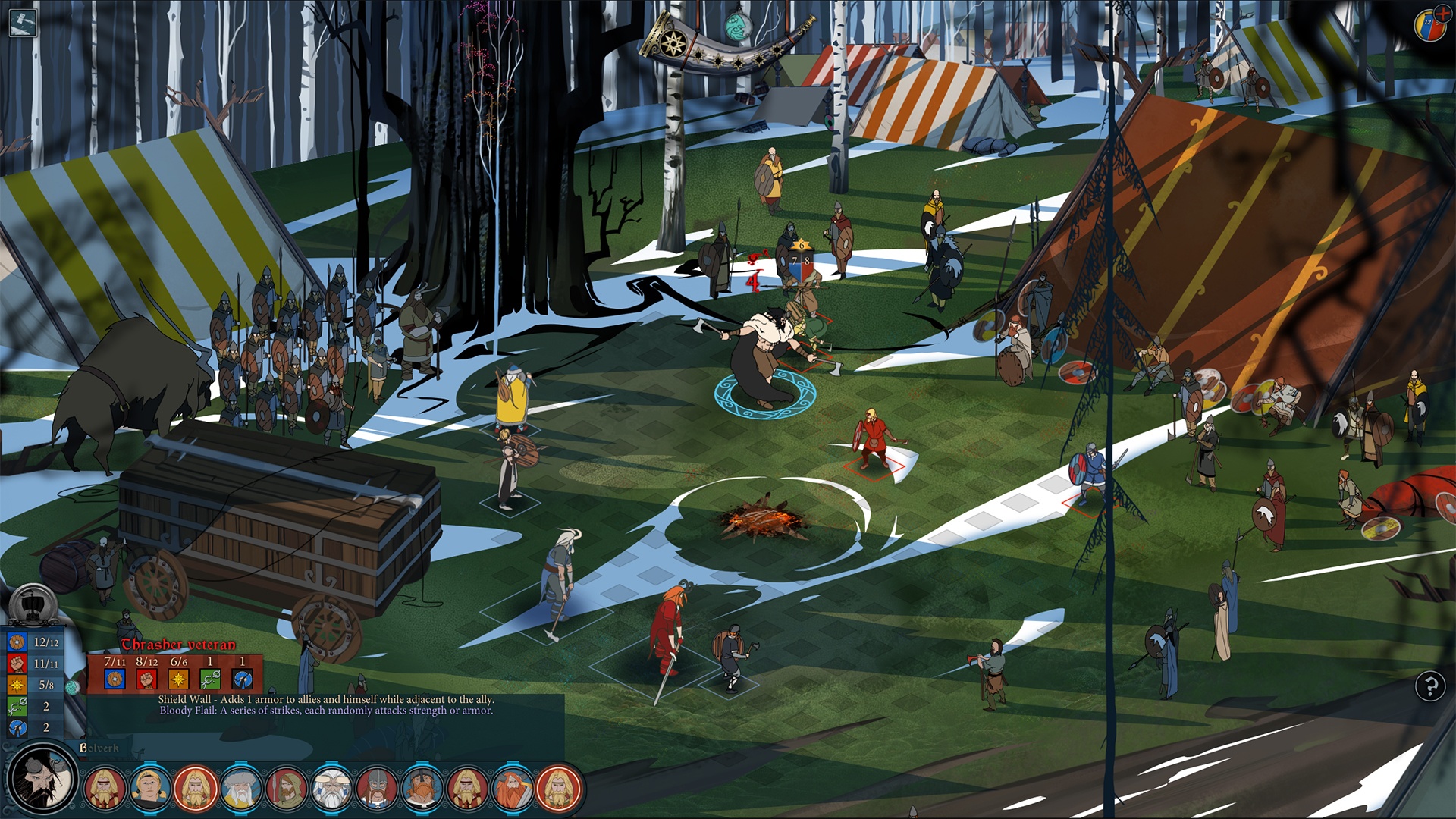 Stoic seems like a fitting name for the development house responsible for The Banner Saga. After all, it’s the best way to describe the frame of mind one must have in order to complete the game’s objective. However, trying to save every member of your assorted troupe is an impossible task and when characters and storylines emerge that demand your involvement, you can’t help but let your emotions act as your guide.

It’s a tricky balancing act that returns for The Banner Saga 2, the second instalment in a planned trilogy. Combining tactical turn-based strategy with role-playing characteristics, your goal is to /guide a group of nomadic wanderers to safety, out of reach from a race of colossal warmongers known as the Dredge. Appointed as the reluctant leader of the caravan, you’ll also have to defuse petty squabble, ration supplies, fend of the elements and make harsh decisions if at least some of your company is to survive on their journey.

The story isn’t the only thing that is picked up after the events of the first game. In fact, your save file can be transferred across, meaning that you’ll not only continue the story with your chosen character, but narrative decisions, character stats and surviving cast members will carry also. Considering the game tells a story worthy of a deep fantasy novel, it’s a mechanic that works and keeps the momentum going in a concise manner. However, aside from a brief recap available on the main menu, newcomers may find this brutal but beautiful world all a little daunting.

Death may be inevitable, but at least managing your caravan is a relatively uncomplicated process. Training fighters will help fend off any ambushes that may lie ahead, while the rest of your followers act as clansmen, replenishing your dwindling supplies with each passing day. A constant bombardment of narrative events threatens to unbalance the books at which point you’ll have to make difficult decisions that could see sacrifices being made for the great good. But even the right call can come at a cost. 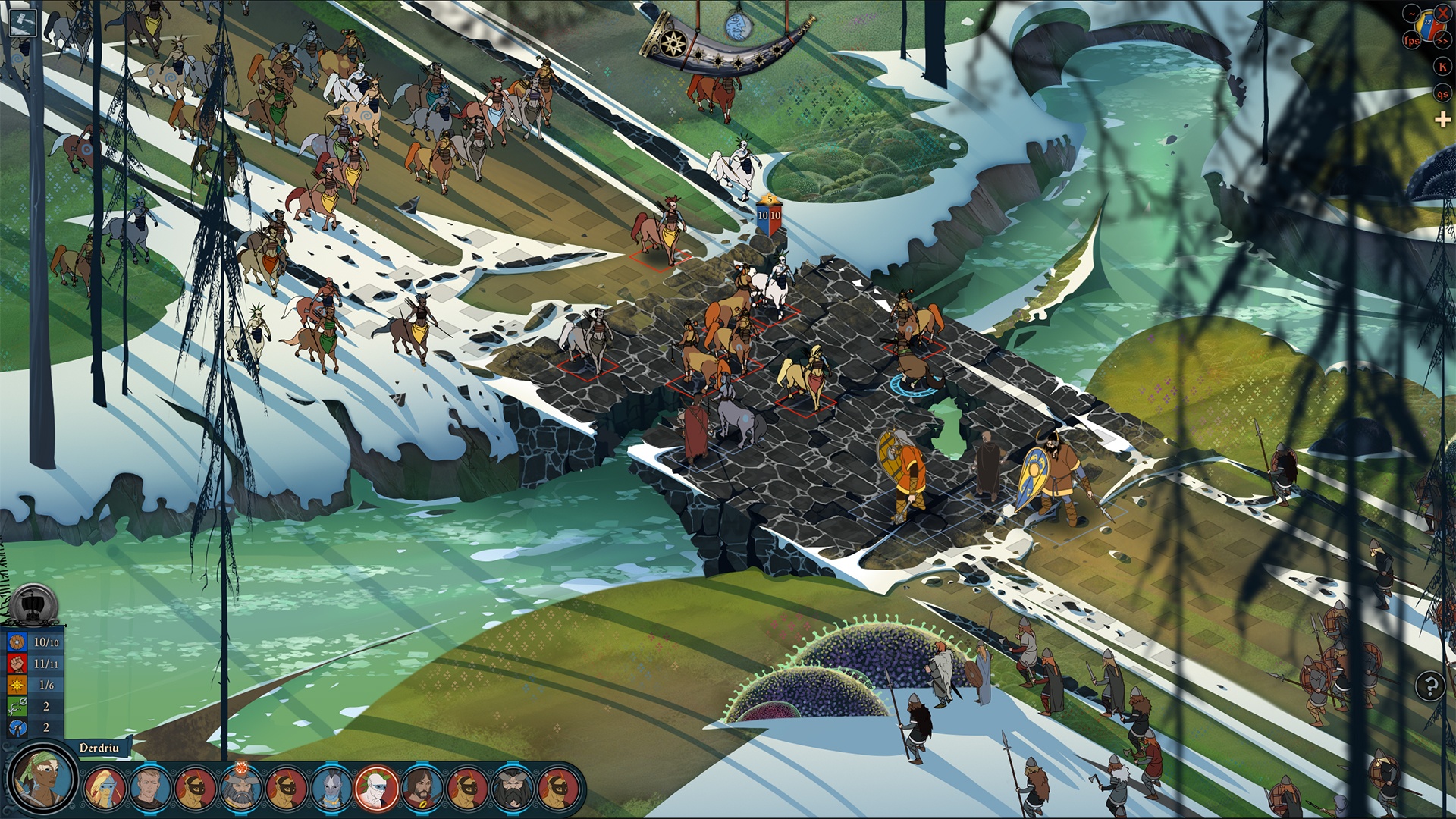 Morale is just as vital a resource and if the threat of starvation or attack wasn’t enough of a worry for your party, so too are the numerous occasions where your leadership and diplomacy skills are put to the test. A simple conversation with another hero character can cause divisions in the ranks, while your approach to events on the road may seem noble and righteous at the time but can prove to be devasting later down the line. It’s a concept similar to those found in the Telltale adventure games such as Tales From The Borderlands or The Walking Dead. You may finish the game in one piece, but the same can’t be said for members of your party.

Caution is advised when making these decisions. Hero characters in particular are susceptible to being on the wrong side of a dialogue choice, and if someone dies or disbands your party, then they will no longer be available for the the turn-based action sequences come as a well-deserved, if no-less challenging break from the cross-continental journey. A hand-picked party of six available warriors will enter the fray, from which you can choose their starting position before battle commences. Each character has their own attributes and weapon of choice, so covering all the bases and matching up against your opponent’s team is vital for a positive outcome.

Each battle scene takes place on a grid, with each square translating to one unit of movement. Characters are generally allowed to move once and attack once per turn, and while it might seem like a simple approach, the gods of fate can turn against you quickly, so a careful approach is a must. Health and armour stats for each hero not only represent how much damage they can take but also how much they can also dish out. So if you choose to whittle down your opponent’s armour first, then you may be leaving yourself open to attacks that will not only affect your health, but also your attack power.

The hefty Varl characters generally act as the heavy-hitters of the group, sacrificing movement over attack power Meanwhile human characters are much quicker on their feet, and can range between archers and spearmen, but are less strong-armed than their viking-inspired allies. New to the series are the Horseborn, a Centaur-like race of human-equestrian hybrids enter the story part way through the game, bringing with them a strategic edge that allows them to move after attacking. Regardless of race, each hero has a special move which can turn the tide of battle. Some of these will straight out cause more damage to one or more opponents, while passive abilities can turn the tides of war and even push the enemy back a square or two. 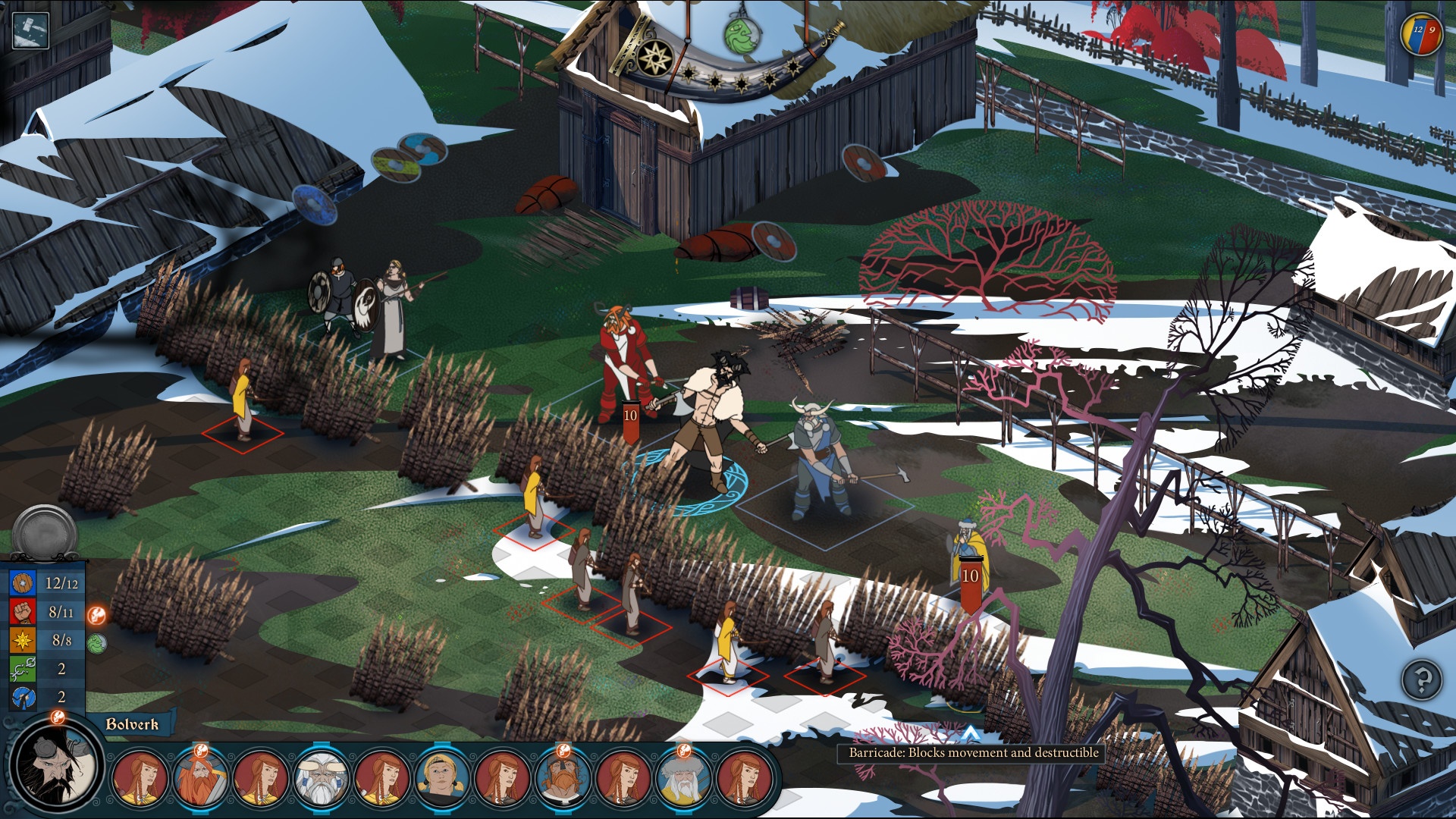 The simplicity of the system makes it very accessible to those who perhaps haven’t quite earned the rank of Armchair General thanks to other strategy games. And if you’ve succeeded in keeping morale up within the caravan, then this can be utilized in the form of Willpower – a consumable boost that can add extra bite to your characters attacks and special moves. The enemy also has a few tricks up their sleeve as will, with their own range of devastating abilities and reinforcements to call in just when you think you’ve got them on the ropes. It makes every battle feel unique and vital to the story, rather than simply being a random encounter with two faceless armies fighting on a non-descript battlefield.

Of course the price of war can be high and if you’re lucky to escape with your life, you’ll still need to rest up damaged characters between fights. Kills and win convert into morale off the battlefield, which can then be used to level up your heroes and improve their stats, while items can be bought at the market to give your favourites some bonus attributes, such as increased defense or attack power. Like everything else in the game however, these are also severely limited so carefully making sure you share experience points and accessories amongst your roster is important, particularly if it some of your squad has to spend time in the infirmary.

There’s a lot of doom and gloom to be found throughout The Banner Saga 2, but one thing that you can’t help but enjoy are the beautiful hand-drawn visuals that essentially make up every aspect of the game’s graphics. Inspired somewhat by the pre-computer generated, golden age of animation, it makes the most out of the 2D approach. Every character looks unique, adding some much-needed heart to a story that’s so focused on survival and fear. Even the battle sequences are absolutely gorgeous, with character models animated right down to the finest detail in their actions. Topping it all off it a majestic, inspiring orchestral soundtrack by Austin Wintory that feels grand and epic in every scale.

Just when it seems like the story is about to heat up amidst the wintery atmosphere, the game cuts to black and we’re left wondering what happens next. Of course, this is just the middle volume of Stoic’s fantasy epic and if the bold aesthetics and powerful story wasn’t enough of a reward, overcoming this endurance test is an accomplishment in of itself. Building upon the intriguing approach to the strategy genre laid out by the first game, The Banner Saga 2 broadens its horizons all while upping the ante in the process.