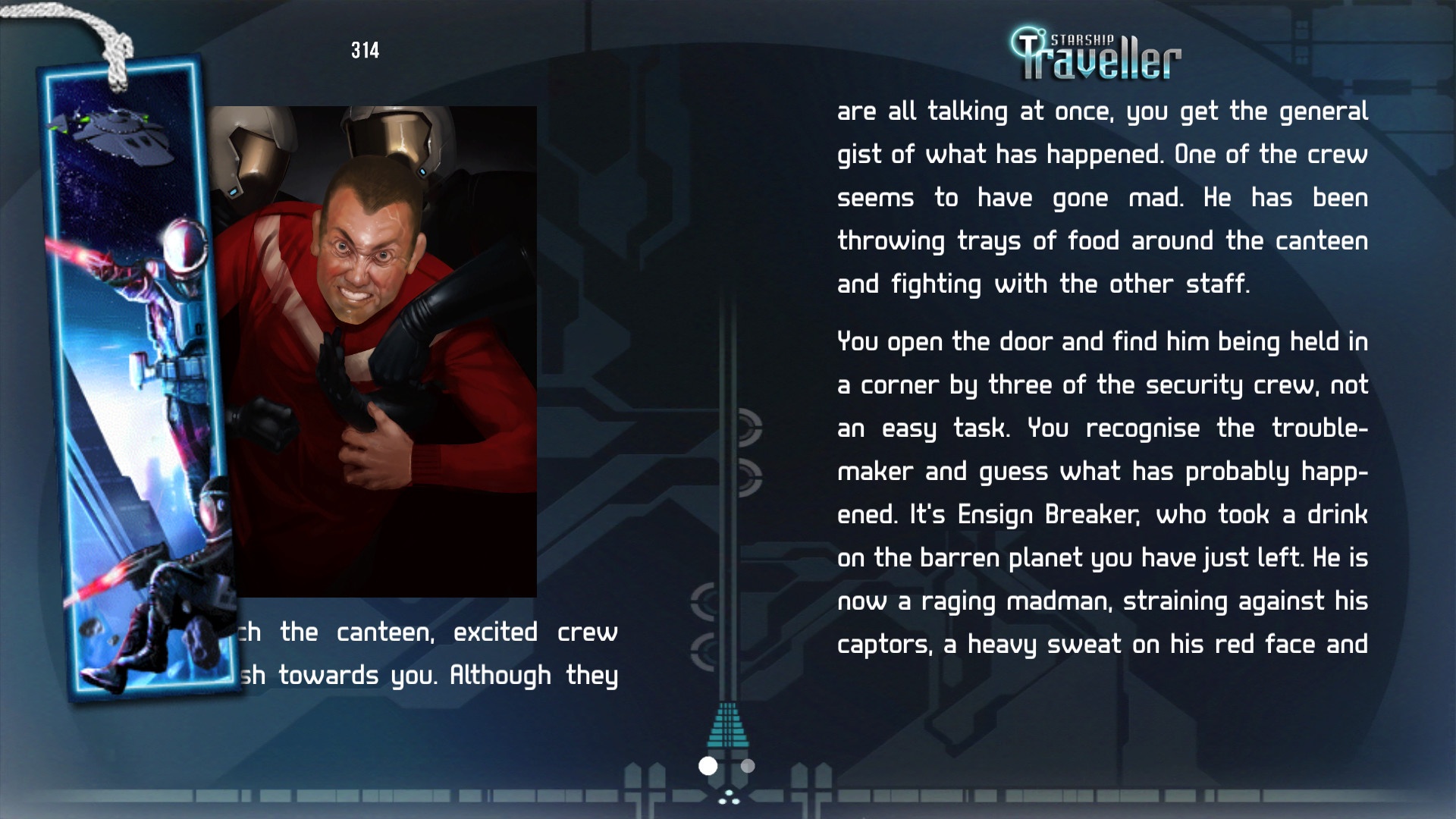 Developer Tin Man Games have specialised in creating digital gamebooks for several years now. Many of them were adaptions of the legendary Fighting Fantasy ‘choose your own adventure’ gamebook series, with Starship Traveller being a notable example. The single player gamebook was first released in 1983 and was the first of the series to feature a sci-fi rather than fantasy setting. This modern release faithfully replicates the content from the hard copy original, but is the gameplay still relevant for modern gamers?

The short answer – yes and no (admittedly that’s not a great short answer). The present-day genre of interactive novels have improved on the format of the original gamebooks, and as a result Starship Traveller often feels clunky. A text narrative advances the story with just the occasional choice available to the player on how to proceed. There’s an emphasis on dice rolling and randomness which can often be frustrating, with the combat in particular disappointment. Battles (whether with fists, phasers or ships) have little to no interactivity and simply involve watching lots of dice rolls, although you can at least speed these up. 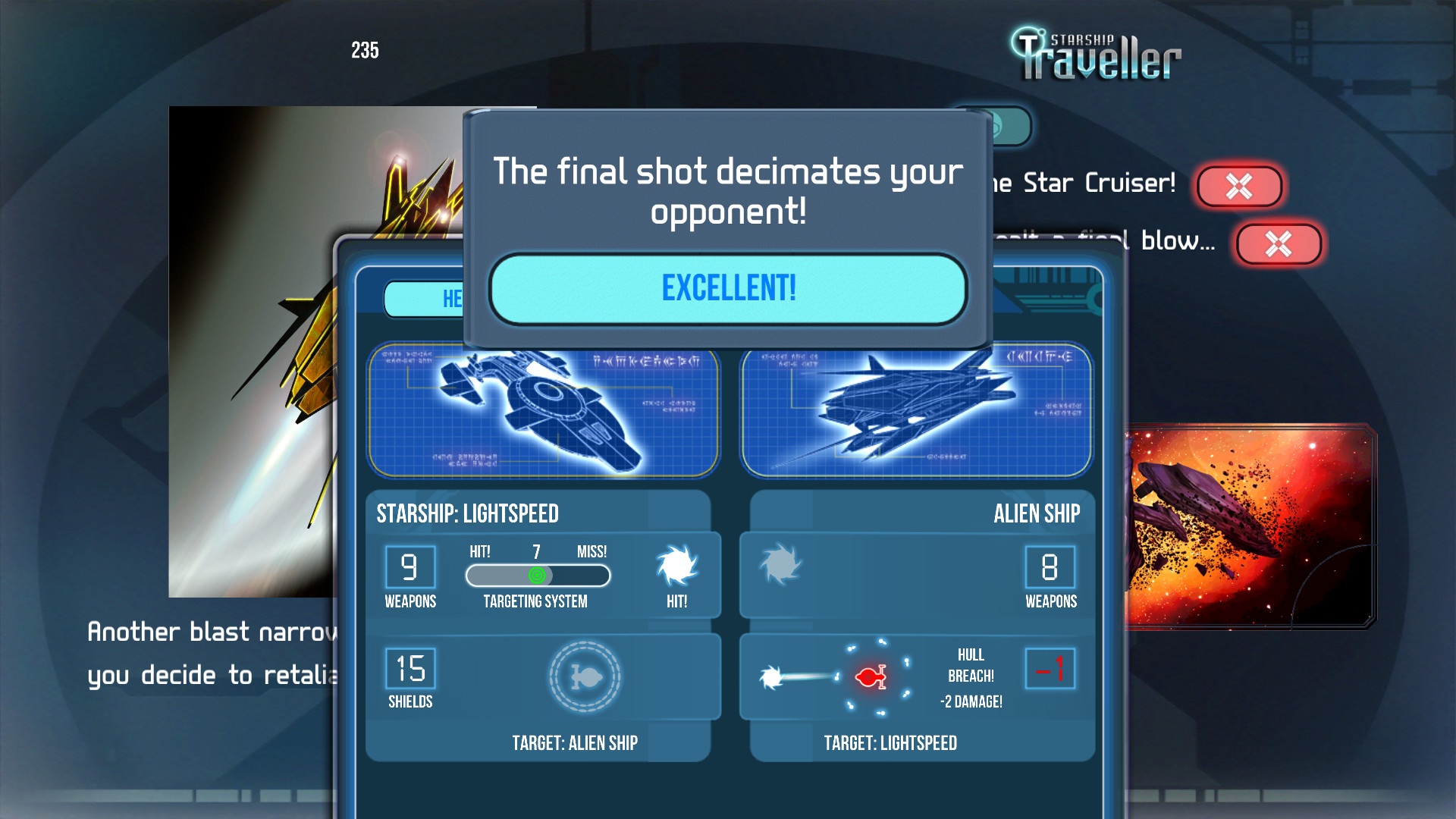 Of course the main appeal of Starship Traveller (both then and now) is how much its clearly based on the original Star Trek series. Not only does the ship look similar, but you’ve got a standard crew arrangement with key officers in the science, medical, engineering and security teams. (Plus of course some red-shirts and an irritating ensign). You also find yourself engaging in the sort of adventures that the crew of the Enterprise encountered and if you’re a fan at all of old-school space adventures there’s some enjoyment to be had here. The opportunity to rename your crew helps improve the interactivity. On my various playthroughs I not only used the crew of the different Star Trek series, but also enjoyed using the names from Firefly and Futurama!

It is a shame that you aren’t given any portraits of the crew, so you’ll have to use your imagination to give some further personality to your faceless officers. Otherwise the visuals of Starship Traveller are decent enough, with a standard sci-fi blue interface and some nice original artwork. There’s no voice acting though and very few audio effects – and apart from the rousing intro the rest of the music is fairly forgettable.

As Starship Traveller is a digital gamebook some might argue it would be a better fit on a tablet, and it was actually originally released on mobile devices. This actually brings me to my biggest gripe, as much of the interface is still clearly geared towards those mobile devices. Several features such as the map and character stats are hidden until you click around the edge of the screen, and the text is far too big. Admittedly you can alter the size of the text (and a dyslexic-friendly font option is a nice touch) but overall I feel far more could have been done for the PC conversion. 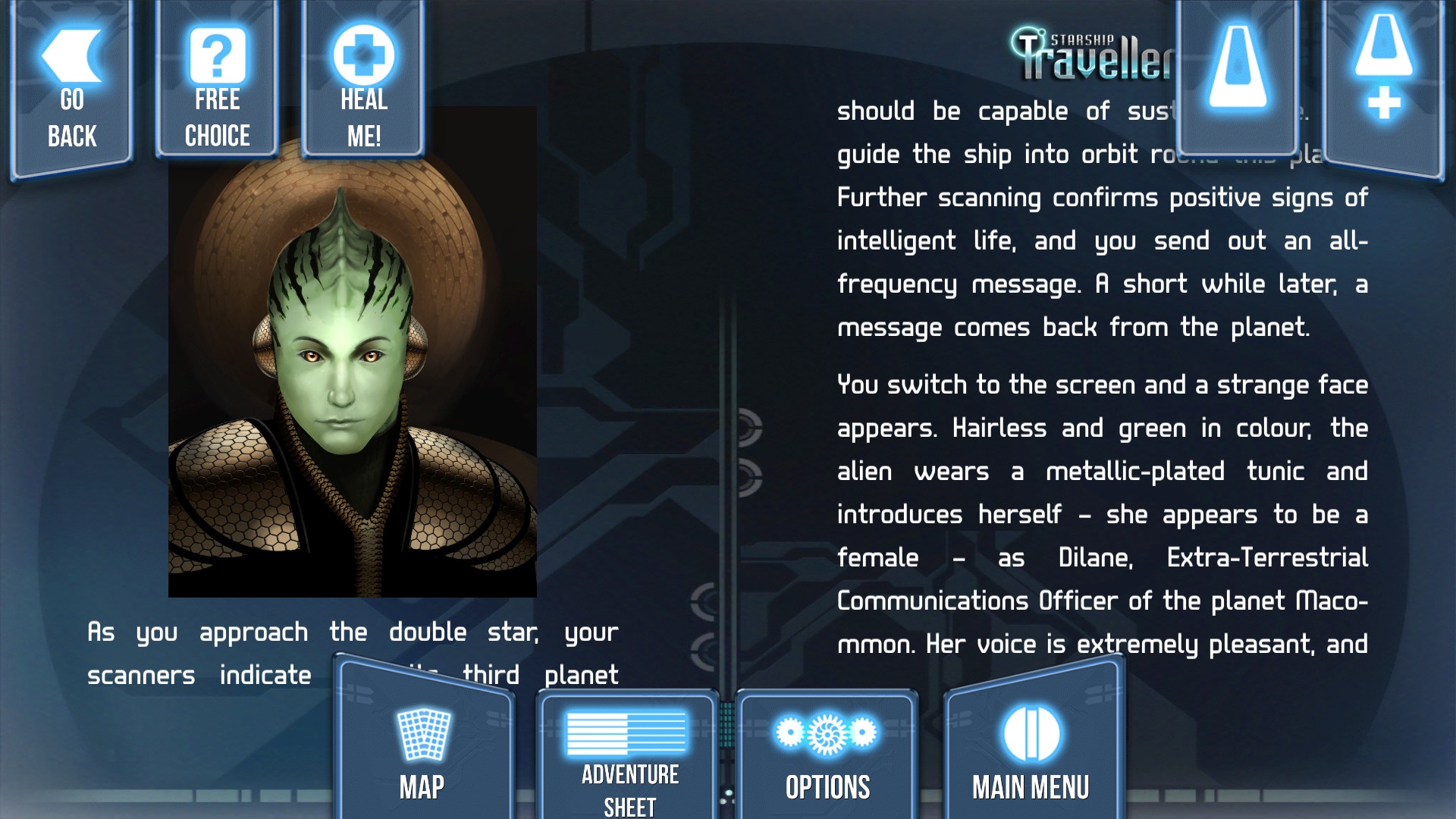 The other big problem for a gamebook is longevity, and Starship Traveller does suffer here too. A standard playthrough will last less than an hour, and subsequent playthroughs reveal less content than you might think. Although the start of the game allows you to choose from three different directions into different solar systems they all soon realign and there aren’t many pathways available if you want to actually reach a ‘win’ scenario. The inclusion of a ‘free read’ option that effectively allows you to cheat and turn back pages does reduce frustration, but as a downside you’ll probably exhaust all various paths even faster than you would usually.

Starship Traveller is a decidedly old-school gamebook adventure that will appeal to any Fighting Fantasy or Star Trek fans. However it is a fairly limited experience with a weak combat system, and the emphasis on luck might put many off. Fans may appreciate the few bonus features, such as the history of the series, but there are better examples of interactive novels available.