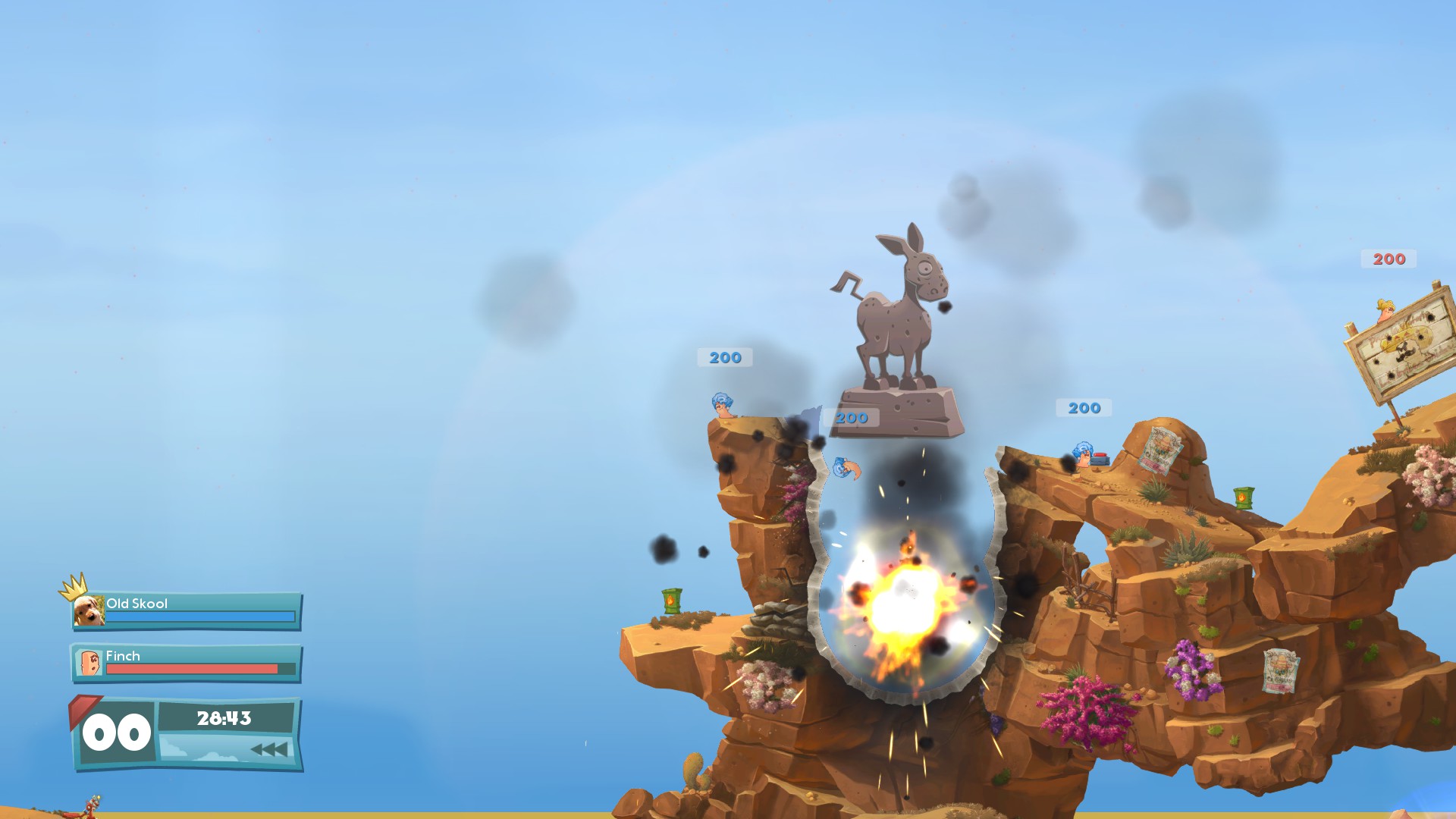 How many worms are too many worms? How long is a piece of string? Why would anyone release an Anniversary Collection on their 21stanniversary? I don’t have the answer to any of these questions, but if you’re a fan of Team 17’s iconic take on small-scale strategic warfare, Worms Anniversary Edition should have you covered thanks to its wealth of content and collection of fantastic games. This heavyweight assembly includes Worms Battlegrounds and its enjoyable DLC, ‘Alien Invasion’ along with the more recently released Worms W.M.D complete with its video game-centric, ‘All-Stars’ add-on. Whether anyone needs both games in their entirety is open to debate, but both are individually strong entries in the long running Worms franchise highlighting something of a return to form for a series that had previously appeared to lose its way.

Extensive reviews for Worms Battlegrounds and Worms W.M.D can be found on the site, but needless to say, both proved enjoyable upon their initial release with nothing changing in the months and years since. Battlegrounds and W.M.D are as fun as ever, and with all of the DLC now added, Worms Anniversary Edition delivers the definitive version of each game in what combines for a rather hefty collection. Yes, the price tag is admittedly rather hefty too, but if you’re a fan of Worms (or ever have been for that matter), chances are that this collection will not disappoint.

The more traditional of the two, Worms Battlegrounds might well prove the more popular amongst the Worms ‘purists’ out there. There are a handful of minor twists on the traditional gameplay, but Battlegrounds really is a return to the old school template that has always served the series so well. If you’ve played early iterations of Worms before, you’ll feel right at home here with the biggest changes coming in the form of the new coat of paint (albeit a new coat of paint that harkens back to the original’s design) and its host of new weaponry with which to destroy your enemies.

As always, Worms Battlegrounds is at its best when played competitively, but thanks in part to the narration from the IT Crowd’s, Katherine Parkinson and her brilliantly deadpan delivery, Battlegrounds’ single player options are made much more entertaining than, well, playing Worms alone really has any right to be. In fairness though, the challenges are relatively diverse and, despite the AI being customarily all over the place, is entertaining enough to make it worth at least a customary glance. The story is complete mince of course, but it’s not without its moments while Worms Ops, despite starting gently enough, actually delivers a relatively stern challenge once you start to progress. It might be little more than an elaborate way to prepare you for competitive Worms action, but both Story Mode and Worms Ops Mode deliver a decent challenge and an entertaining way to get used to the games’ array of outlandish weaponry. 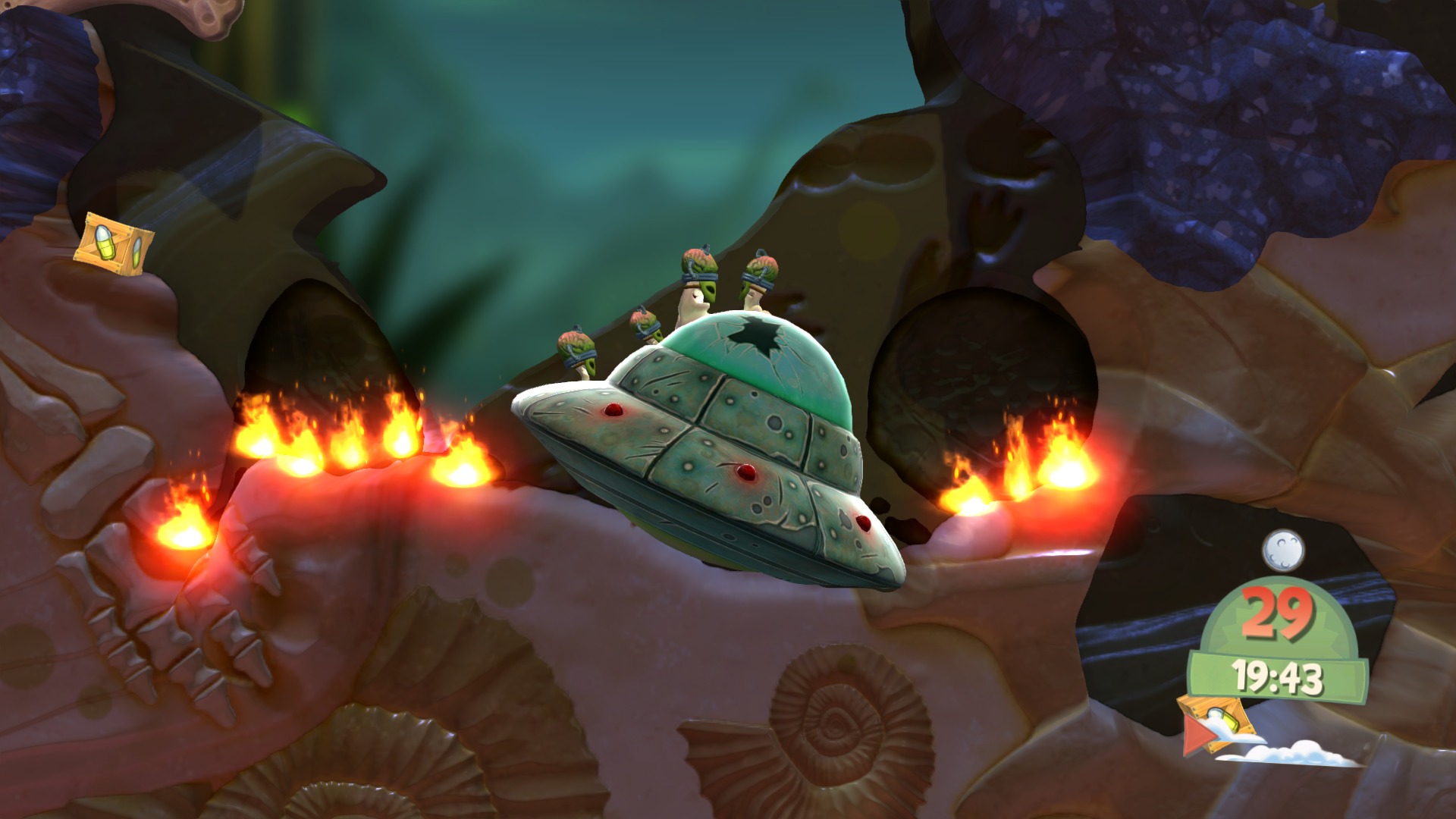 Also included in the Worms Battlegrounds package is the Alien Invasion DLC that, while adding relatively little to the core gameplay, does add additional Story Mode missions along with a surprisingly enjoyable new game mode. The aptly named, ‘Body Count’ provides an addictive score-based challenge that speeds up gameplay and when combined with the new DLC exclusive weaponry and customisable items, can lead to all new levels of battlefield shenanigans.

As good as Worms Battlegrounds and its DLC might be though, there is no getting around just how slavish it is to the original template, and while I’d argue that that is no bad thing, those looking for something a little different might be better off with the slightly more ambitions, Worms W.M.D.

Still played on a 2D plane and still recognisably Worms, W.M.D is imbued with a more colourful palette and dare I say, a slightly more modern art design. It’s still cartoony of course but the visuals and designs of the Worms themselves have seen an notable upgrade with W.M.D arguably representing the most visually impressive game in the series to date.

The biggest changes however come in the form of the new additions to the core gameplay. It’s still turn-based and it’s still all about wiping out the enemy, but in W.M.D, you now have a number of additional options in regards to your worm-based warfare and are now provided with an all new XP system to help keep you hooked on the experience. It’s hardly a Strategy RPG, but the new XP system certainly adds a carrot to chase and a recognisable system for unlocking new content. 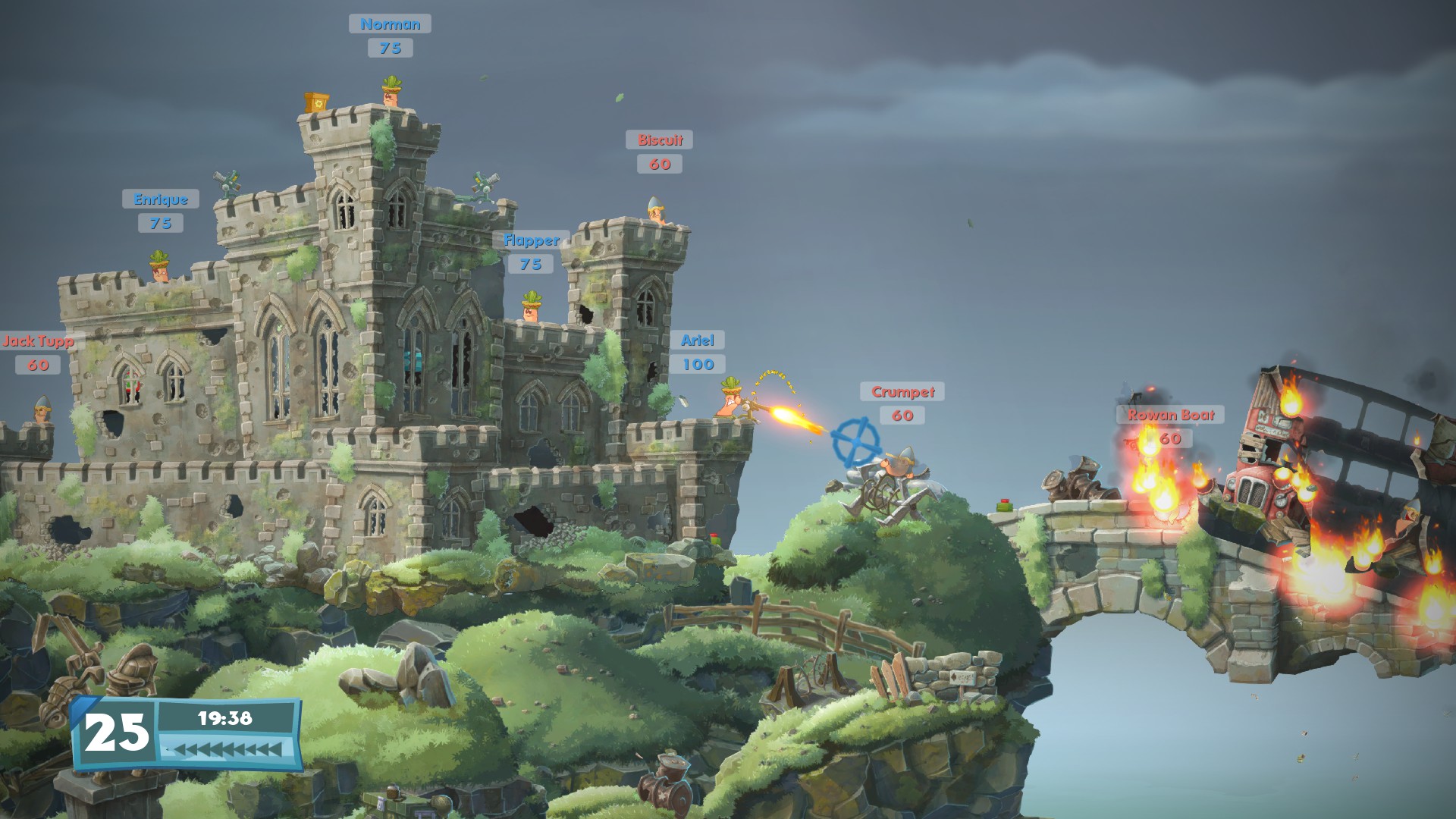 The weapons are as bonkers as ever, but now you have the option to craft new weapons as the match progresses by breaking down existing weapons so that their components can be used for subsequent construction. It adds an all new layer of tactical depth to proceedings without effecting the flow of matches in a negative way.

More dramatic perhaps is the inclusion of vehicles. Whether it be a tank, a helicopter or a mech suit, getting to a vehicle first can make all the difference and inevitably changes the way you will need to approach the game. Yes, the vehicles themselves are incredibly fun and can cause hilarious levels of carnage, but equally, one could argue that they throw off the games’ otherwise perfect sense of balance. Your opinion will likely be tied to how seriously you take the game, but as a more casual Worms fan, I for one found them to be an exciting new addition.

This is especially true of the additional All-Star content that again, while perhaps far from ideal for purists, proves incredibly entertaining for those approaching Worms as a more casual party game. With vehicles and weapons from a wide-range of (mostly) famous video game franchises, the All-Star additions put fun above all else with content based on video games as wide ranging as  Yooka-Laylee, Rocket League, Orcs Must Die, Saints Row, Broforce, Payday 2 and Goat simulator. It even includes a selection of appearances from a number of Rare’s most famous franchises. It’s little more than silly fun of course, but it’s fun all the same and a very cool crossover for that includes nods to an eclectic collection of mostly indie hits.

Worms Anniversary Edition provides more than enough content to keep any Worms fan happy. Purists will arguably prefer the more traditional Battlegrounds gameplay while W.M.D delivers plenty of new content and gameplay mechanics while managing to keep the essence of the Worms experience intact. The DLC included provides plenty of additional content for both games with the inclusion of the All-Stars content proving especially enjoyable. It’s still Worms as you know and remember of course, but with surprisingly balanced gameplay and a host of mostly successful new ideas, this collection serves as a welcome reminder of just how good Team 17’s, Worms series really is.