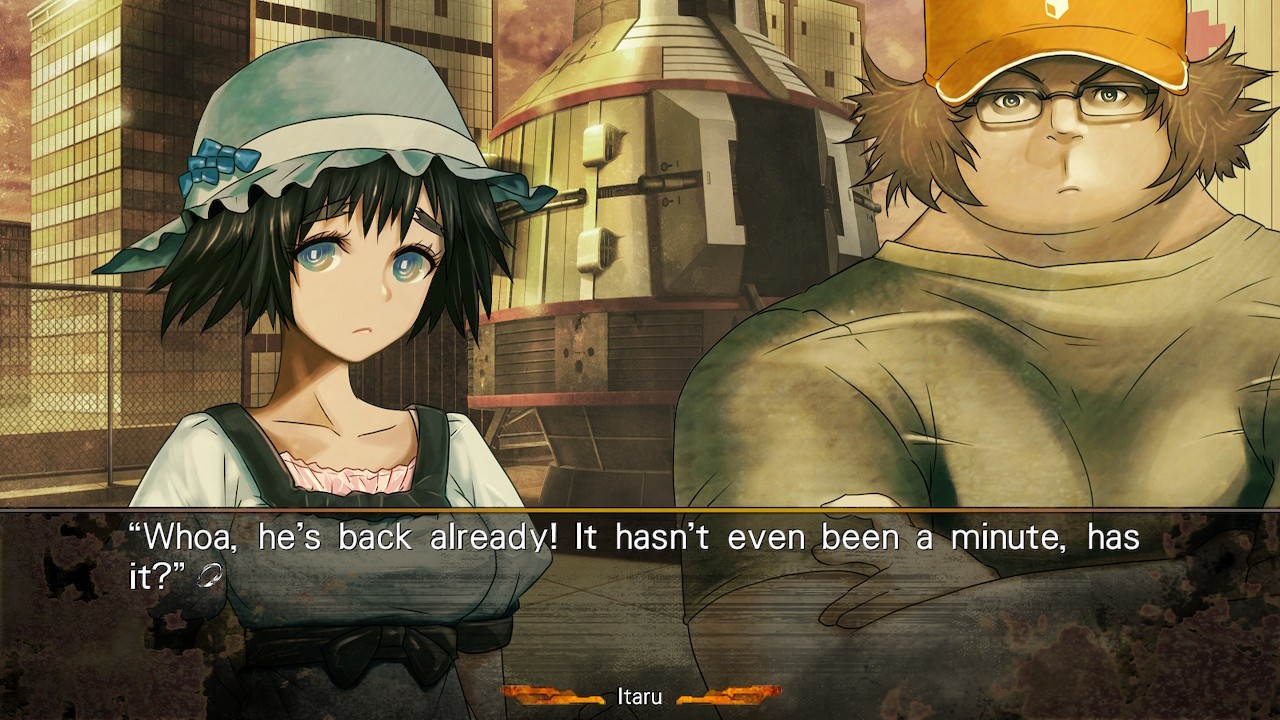 Happy endings are overrated. One of my favorite movies of all time is Fallen (Denzel Washington, John Goodman), and I love it because it’s not a happy ending. It’s not something like Get Carter, where you’re rooting for the bad guy: it’s a great film where there is clearly sides of good and evil, we spend the movie trying to support the side of good and evil wins. It’s a fantastic sideswipe, and I’m sorry if I spoiled that for you, but the movie is more than 20 years old, you should have seen it by now. But Steins;Gate’s true ending is a happy ending, at least in the way that many people interpret it. Peace on earth, no one dies, chance encounters on the street, woo hoo. This is literally a complex story of time travel and alternate timelines, and there’s one timeline that just ends with everything being hunky dory. In truth, due to the nature of the D-Mails, every ending is plausible and likely as the true ending. With Steins;Gate 0, we explore the very, very real possibility that there wasn’t a good ending for the Lab Members, and, just maybe, screwing around in time can have devastating effects in ways we didn’t imagine.

The fine folks of Mages and 5pb posit that you should be able to play Steins;Gate 0 without needing to play the original, and I completely disagree. While there is a good summation as to what has happened and catches you up to speed quickly, you don’t really have a chance to fully appreciate everything that Rintaro Okabe had to go through in order to get to this point. Also, spoiler warning, this review touches heavily on some events from the first game (including some endings), so please bail now if you don’t want that ruined. We start with a flubbed chance to rescue the past, wherein Okarin is able to stop World War III but still ends up killing Kurisu, daughter of the antagonist (Doctor Nakabachi) and the clear love interest from the first game. Okabe straight up develops PTSD from this, because that’s what happens when you accidentally kill someone you love, and is sucked into a spiral of despair and depression. Some time later, Kurisu’s former co-workers showcase a new development: the Amadeus system, which allows for the creation of digital avatars through memories of people, and. Surprise, their first test is to make Kurisu. Talking with fake Kurisu sparks the determination in Okabe to try again, and he rebuilds the PhoneWave (part mobile phone, part microwave, all time machine) to try and track down people lost in the splintering timelines and, maybe, still find a way to rescue Kurisu.

As you can see, the plot begins somewhere very heady, and I argue that Steins;Gate 0 gets far more convoluted than the original. Whereas Steins;Gate had several real moments of confusion in which things from different timelines began to collide and overwrite one another, 0 has a splintering effect that drastically makes the game two very different beasts, and it only splinters further from there. The choices that we make within the Amadeus system (more on that in a moment) carry a stronger echo and make it even harder to try to figure out the correct path in order to get to the “True” ending of saving Kurisu and preventing World War III. Additionally, if you’re actually interested to see the true ending, you absolutely need to finish the game a minimum of two times first, achieving two other endings from the two major pathways in order to re-converge and get the best possible timeline, which is sort of a daunting ask of players, even if they have been invested in the game so far. Thankfully, as always, the gang of Akihabara makes for compelling characters, and between time travelling future daughters, clearly unhinged and passionate scientists, dear friends who won’t stop dying and our own mostly insane protagonist, I was along for the ride from the drop. 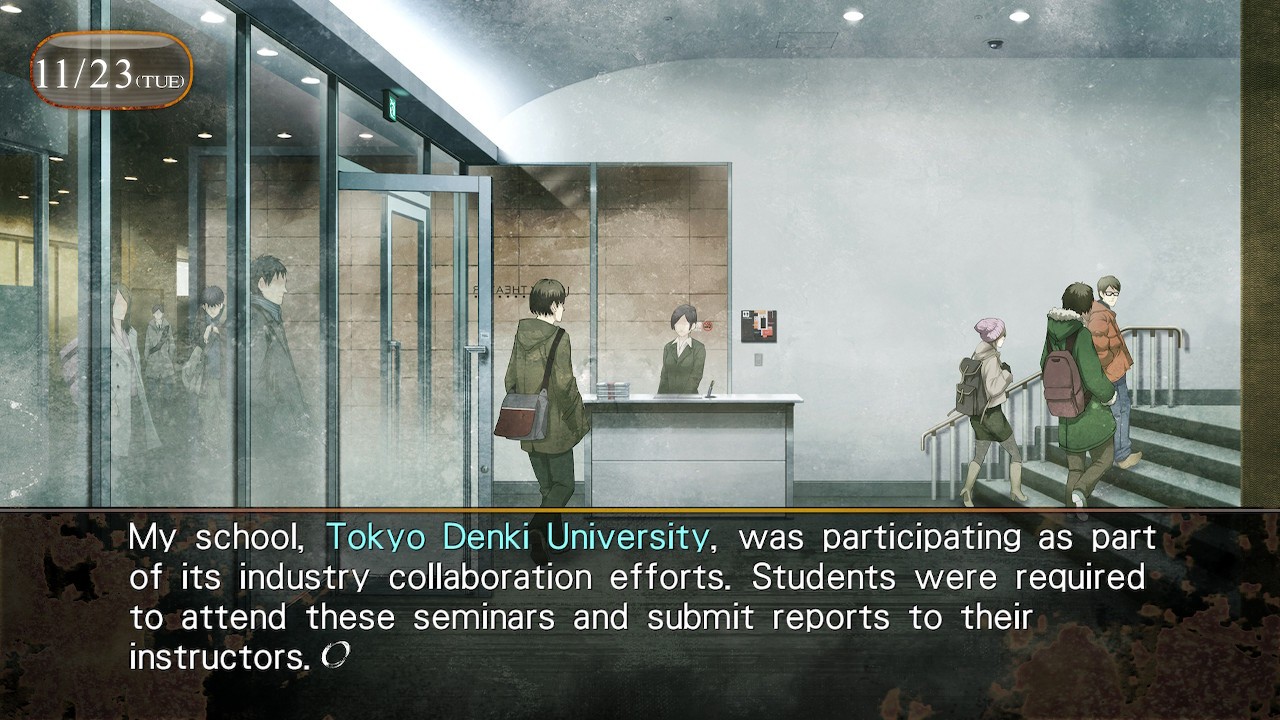 The Amadeus system mimics a lot of what we saw in the first Steins;Gate adventure with a few extra caveats that may or may not interest players. Once again, the decision to answer or ignore the Amadeus reaching out to you (through your mobile phone) is the key to figuring out what actions you’ll take to affect the future of the game. On the one hand, it’s pretty convenient as it’s an extension of the first system but updated to make it more congruent with the world that Okabe is currently living in. Since he’s most interested in reconnected with Kurisu and the hunt for her memories and research are the driving force behind the plot, it makes sense for those interactions to be the ones that shape the storyline. On the other hand, I feel like there could have been plenty of other ways to use the Amadeus system, such as having a more futuristic presentation (some kind of neural implant or something), though I suppose it wouldn’t have allowed for ignoring the information in such a convenient way. It’s not a bad thing, it just doesn’t feel like a massive leap forward.

The other thing that comes with the phone is the omnipresent RINE system, which is clearly a nod to the LINE social media app, and this is where I start to feel uneasy about the dedication to the plotline. Steins;Gate 0 is drowning in details regarding the fantastical exploration of time travel, potential futures and misery-laden pasts, yet we have all this extra exposition that not only doesn’t affect the plot, but doesn’t even do much to develop the characters themselves within the game world. I don’t really need to see a minutes-long chat with Mayuri about where she’s going to meet up with Rintaro later on, and what a nuisance his dad is, and what stickers she’s using. I thought that going on a long, arcade based date with Maho and winning something in the UFO machine would lead to anything important later on, and it sincerely did not. There’s a lot of padding, is what I’m saying, and there’s so much meat in the storyline that there really doesn’t need to be. You can JUST focus on jumping forward to 2036 with fake memories from 2011 to circumvent a death in 2025, or that Russians are definitely packing rocket launchers to destroy anyone and anything in their way, or all the madness and the fact that I’m still, to this day, not totally certain what “Stein’s Gate” is. 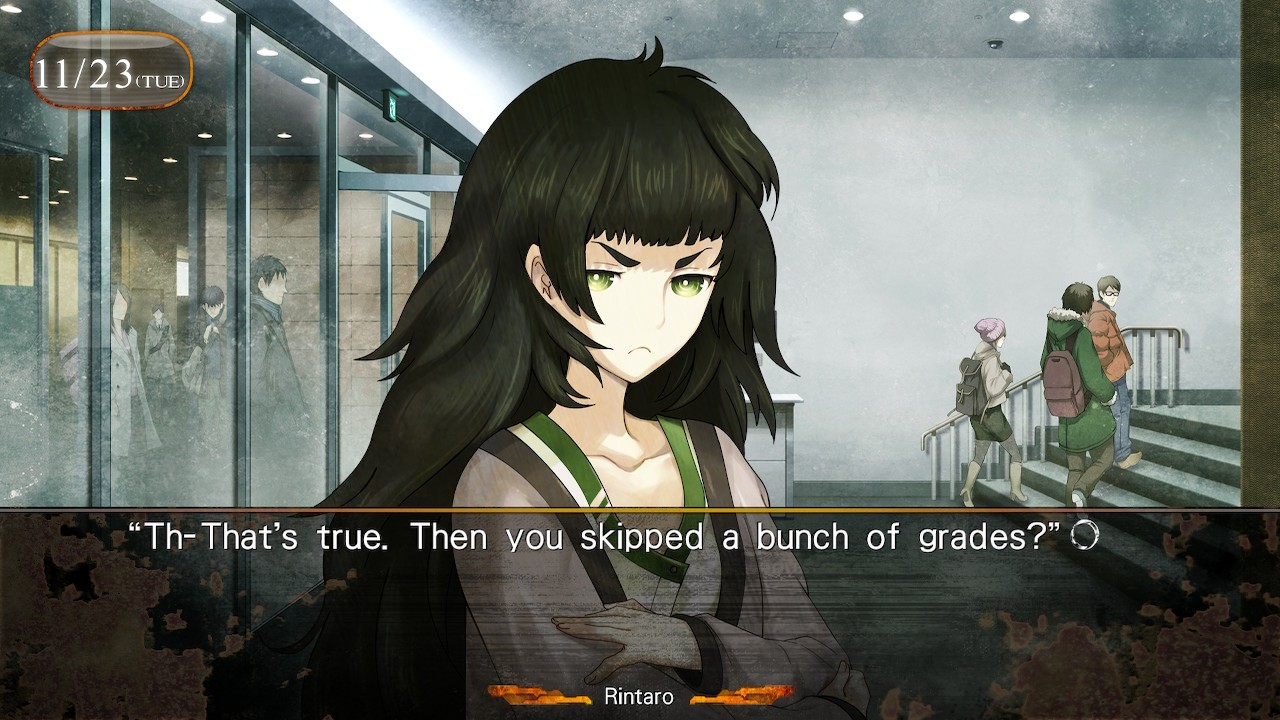 One thing that I did sincerely like is that the different storylines allow us to change perspectives and jump into other characters in order to move the plot forward. Don’t get me wrong, I love Rintaro Okabe as a protagonist, but hearing things from the vantage of Suzuha, for example, was really intriguing and gave more insight into things. Plus, it showed the versatility of the writing from 5pb. It’s easy enough to spin a tale from an omnipresent view, or to entirely focus the game through Rintaro’s obsessive and falsely narcissistic mind, but having someone who is a direct result of the time travel fiasco take the helm and see her trying to live and understand in this world that technically shouldn’t exist for her was great. It makes me more interested in the light novels and, hopefully, seeing more from this world in the future. Not to mention it allowed for even more of the voice work to be showcased, which I honestly could not get enough of. They’ve got such a great crew working on these games that I would love to hunt down some radio dramas or podcasts in the same vein.

Obviously, if you’re coming from the Elite edition of Steins;Gate and are disappointed that this isn’t also fully animated, I don’t know what to tell you. The art style is more in vein with the original version of the first game, but I think there’s some clear touch-up and improvement to angles and different background designs that make this a more appealing title overall. I think the characters are still angular and unique without being too harsh, the color palette is diverse without being too bright and explosive, and the game still has dramatic moments of full shot that really reveals what’s happening beyond just what you’re reading. It does it for me, and, without needing to watch full cinematics, I’m back in control of my game.

Steins;Gate 0 is what a sequel should truly be. It takes the events that have already happened and builds upon them in a way that is plausible due to the fractured timelines, and you really can’t do that with most media. While I won’t pretend it’s perfect (so many worthless side events!), the core story is a banger and the characters and their world is engaging, intriguing and compelling. If you enjoyed the first one, you’re gonna love the hell out of this second one. If you haven’t played the first one, I strongly urge you to at least watch a summary video or watch the animation or something, because it’s a really deep place to dive in, head first, when you aren’t sure where the bottom lies.

Sometimes we make mistakes, and mistakes can cost lives: but, through trial and error, can we repair the damage, or are we doomed to repeat and suffer?