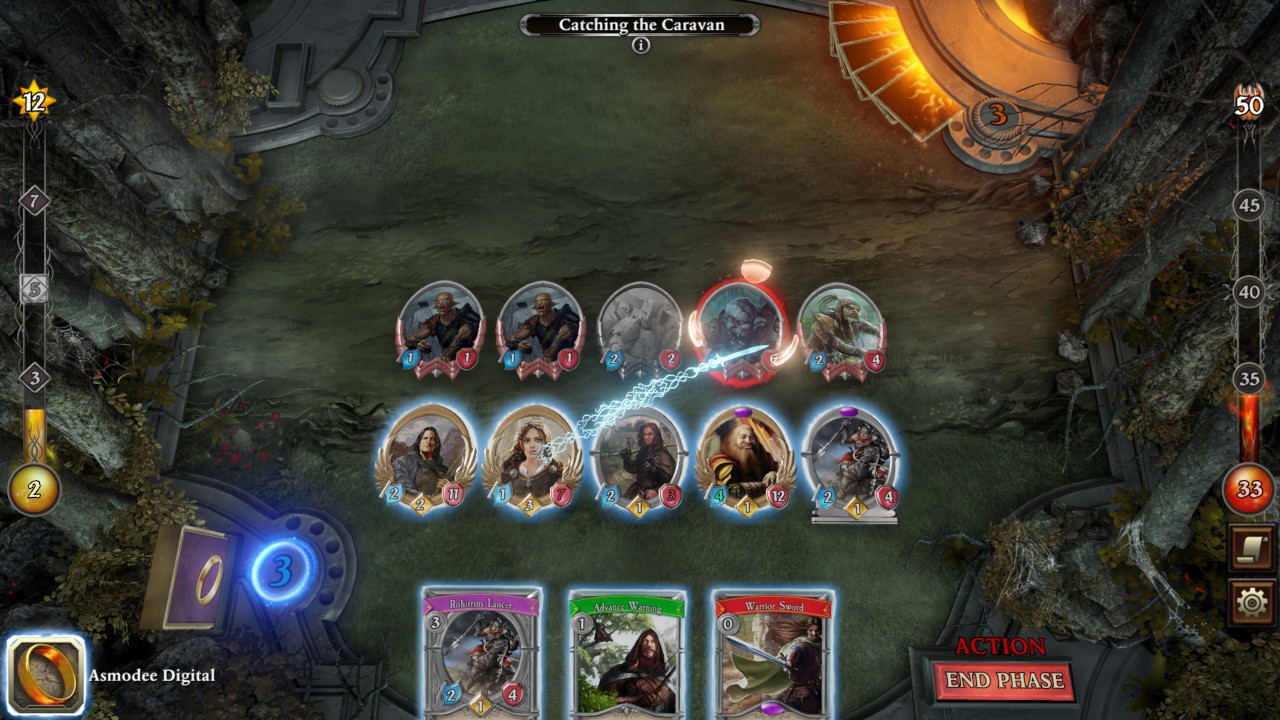 Card games –  specifically non-traditional card games –  have become this excellent source of unique game mechanics and storytelling. Besides the addictive nature of things like Magic: the Gathering and other such combative titles, non-traditional card games allow for elements to unfold and present in ways never before considered. Take, for example, the madness that is Cultist Simulator. All of the different ways that the storyline unfolds and different paths are chosen are uniquely portioned out through the card style (and I’m sincerely hoping we see it land on the Switch soon!). However, it’s important that non-traditional card games have some variation of cohesion and interest to them. Mythos might be one of the older TCGs out there, but it’s still a hallmark of a cool idea with a bizarre and frustrating execution. Asmodee has done a fantastic job of spearheading the classic ideas of board games and card games and bringing them into the current zeitgeist through interesting premises and executions, and they got a great team with Fantasy Flight Interactive at the helm of this project. However, I’m concerned that their latest release may only hook hardcore Tolkien fans for the long haul, and may leave newcomers from other games and the movies quite frustrated.

The Lord of the Rings: The Adventure Card Game is an ambitious and interesting take on the world of Middle Earth. Set up in a combination of deck building and statically designed card games, the player is able to take on the position of the heroes of The Hobbit and Lord of the Rings, sometimes crafting unusual combinations that you may not have read about in the books. As you move forward with the play, you can use clever abilities and tricks, perform careful tactics of combat against the AI or another player (multiplayer is definitely a thing), and achieve victory through the defeat of Sauron, the rescue of other characters, or the discovery of items/locations. It’s very difficult to precisely pinpoint what needs to happen in a traditional versus game because the objectives can change quickly depending on how the decks are built. The single player mode usually makes it very straightforward from the beginning of each mission/chapter, thanks, in part, to some heavily Tolkien-inspired exposition that you can read and listen to (in some cases) prior to starting the play. 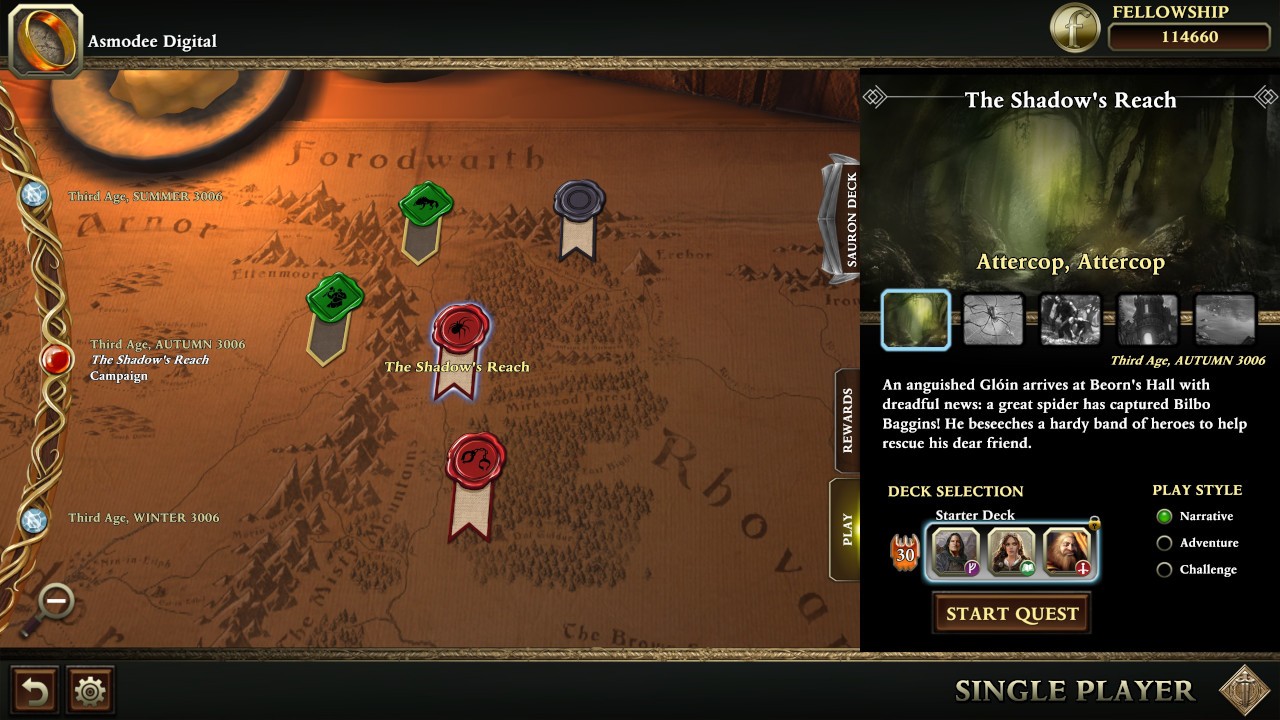 There are some really strong and interesting notes for LotR: ACG. First and foremost, the game does looks absolutely beautiful. Each and every scenario is given a unique backdrop that mimics the different areas of Middle Earth, thus ratcheting up the fantasy aspect significantly for everyone involved. The individual portraits of the heroes and even the villains are gorgeously done, lending personality and interest to acquiring different cards throughout a gameplay and, eventually, expanding your game into further areas (more on that in a moment). While some influence is given to the portrayals by the different actors on screen, Gandalf, Bilbo, Frodo, Smeagol and many, many more all have their own personas projected through the different cards and their designs, which is really important. As grand as Peter Jackson’s projects are, they aren’t the be-all-end-all representation of Tolkien’s words. Hell, this isn’t even the first card game for Lord of the Rings, but that old game went the way of the dodo decades ago. The point is, the game looks phenomenal, and I should hope so with a close to 5GB install footprint.

In theory, learning how to play the Adventure Card Game is fairly straightforward, especially if you take the sizable amount of time to do all the tutorial missions within the single player campaign. Every turn involves deciding whether to play a card in your hand to affect something on the battlefield (up stats, change combat, delay the other player) or executing some command on the playing ground (attack this guy, heal that person, gather that item). You and your opponent take it in turn, so if it feels like you’re being buried under a nonstop barrage, it’s not that the computer is cheating: they just have a better flow of choices and commands to do. At the heart, if you’ve played another card game with combat, you understand the base ideas and can get a hang of the core mechanics quite quickly. The objective for the single player mode is front and center (defeat all the spiders!/keep Bilbo safe!) and that’s all you need to worry about in terms of play. You quickly develop favorites amongst the cards, be they due to effect or simply because of the aforementioned great artwork, and you go from there. Asmodee provided both the Shadow’s Reach and the Shadow’s Falls campaigns from the get-go, so there is a lot to do in a single player capacity. In fact, the fact that this relatively new game has the most current DLC already baked in at no dramatic increase to the price (Switch price is same as Steam+DLC) is pretty damn kind of the developers, and that certainly points in their favor.

Once you complete the tutorial, however, you are in for a bit of a grind, and I hope you’re ready for it. You see, Lord of the Rings: The Adventure Card Game needed to inject some semblance of replay value without making the campaigns too large or unwieldy, so you need to unlock some of the additional cards as you play forward. You do this by earning coins from successful games, and then you get more coins. And more. And don’t worry, you can unlock emotes and card backs and things like that, and there’ll probably be more in the future, and this is where I started to get uneasy. After all, as much as the concept makes sense, I’ve never been a huge fan of needing to create replay through an in game currency, though I obviously favor this more than, say, needing to drop a couple of bucks to unlock the games. Again, all the DLC is here, and I can’t begrudge that: I just wish I could have had all the cards from the very beginning. 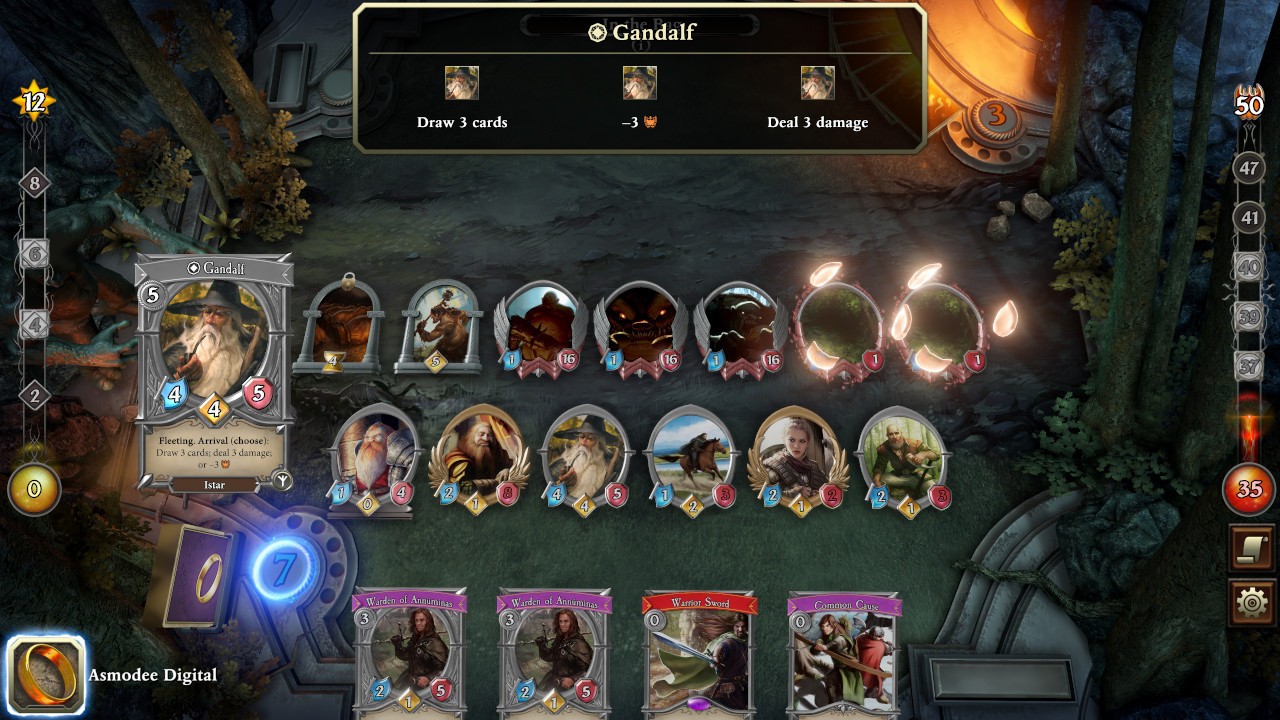 Additionally, the technical issues of the game are absolute killers for serious long term play. There isn’t any touchscreen support, which doesn’t make a lick of sense for a card game. With all the times you need to move things around, check details, assign targets and the like, and the players who’ll be using this game in their own two hands, you’d think that the touch screen would be the most obvious. This was released on a computer first, and touch controls just feels like a more natural extension of the mouse approach. Instead, you get to navigate entirely with buttons and joysticks, which work well enough. I never felt like I was overreaching or zipping past targets, but there was a level of learning that then needed to be injected just into how to handle the game on top of how to play the game. This felt like a super missed opportunity that could have been incredibly simple, but simply flubbed as a result.

The biggest elephant in the room, though, is the needy, angry network connection. The Lord of the Rings: The Adventure Card Game demands that you be connected to the internet. If you’re playing a game, even a single player game, and you need to put your Switch to sleep for a moment because, well, life, you need to wait for it to search out the server and reconnect before you can continue. And, if you’re like me and you actually transition your Switch from the home to the road to play (like every goddamn commercial for the Switch when it launched), then you’re going to be totally locked out of your game. Seriously, I was doing a single player campaign, needed to leave for work, and just got totally snuffed on the train en route to my job. I had to force close the game and then launch in airplane mode, where the game begrudgingly agreed to let me play single player (gee, thanks) but reminded me that it would sync with the network as soon as I got home. I’m glad that it takes advantage of Nintendo Switch Online, but does it have to be so draconian about it? Forcing myself to take extra, preventative measures to play the game in case I have to leave my home really turned me off in a big way, and I hope Asmodee can change this in a future patch.

It looks great, it sounds great, and the concept is well executed as far as making The Lord of the Rings into an Adventure Card Game.  I can get over the touchscreen controls, though I’d prefer not to, and you can grind out all the unlocks in a relatively good amount of time. The network issue is a giant red flag, however, and fans of the Switch and Switch Lite are going to have a hard time reconciling with this in order to keep the playerbase alive. I couldn’t find a multiplayer match all weekend, and so I can’t really comment on that, but it’s certainly not a good sign. If you’re a Tolkien fan who enjoys some interesting strategy and can dedicate an hour or so of guaranteed, uninterrupted play, then go have a blast. However, if you think there’s even a chance you’ll be asked to do something else, you might need to tuck this game back into its Hobbit Hole until another day.

The Lord of the Rings: Adventure Card Game Review

A beautiful & cunning game that is seriously hamstrung by technical difficulties, consider your immediate plans before diving into this Middle Earth Adventure.