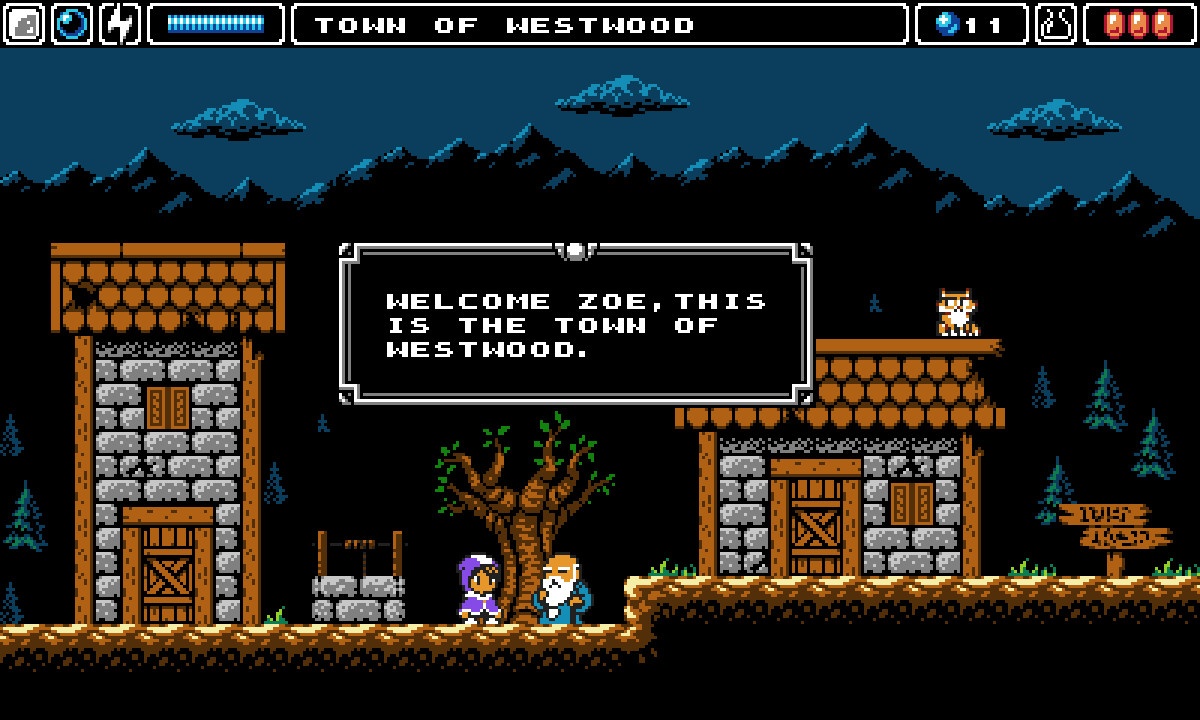 Alwa’s Awakening is a throwback to the old days of the NES era and is inspired by games such as Battle Kid and Battle of Olympus. It was made by a team of 4 people, people who have managed to make this game feel like it was something that came out years ago and not in modern times. That said, I feel like a lot of people are unaware of it and, considering it is somewhat of a niche game, it deserves all the exposure it can get.

In Alwa’s Awakening you play as Zoe, a heroine sent to the world of Alwa to rescue its people in their time of most need from the evil reign of the demonic Vicar and its lackeys. The game is in its essence a metroidvania with lots of backtracking and with a heavy focus on platforming, but you’ll also get to fight enemy minions and bosses, so the game does also focus somewhat on combat. Still, every room in the game, which there are hundreds of them if I’m not wrong, feels like a puzzle of sorts, in the sense that you have to find the right way to deal with enemies and obstacles in order to exit to another room safely. That said, the game ties everything together with the only weapon at your disposal, a magical staff, which you acquire early on the game. 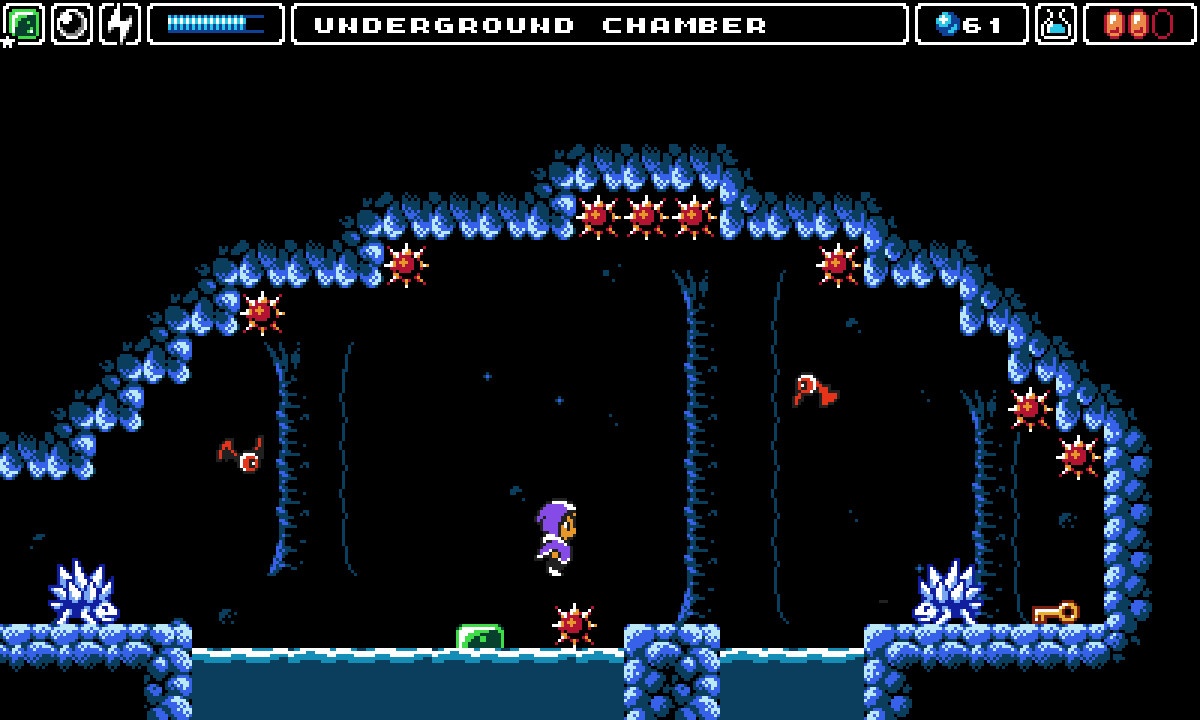 Besides beating the bad guys with it, you will also be able to use spells, after acquiring certain gemstones, by selecting the spell you want to use and then pressing the Attack and Up keys at the same time. That said, there are 3 gemstones in total, a green one, a blue one and a yellow oner and each one of them can only be used one at a time, while also having to manage your mana pool. The first gemstone allows you to create green blocks which you can use as platforms to reach areas which were previously inaccessible, but you can also used them to make a safe path across obstacles as well as trigger switches in order to unlock certain doors. Further down the line you’ll also be able to upgrade it, making it so that these blocks can be used to traverse water. The blue gemstone will grant you the ability to spawn water bubbles that go upwards, allowing you to reach more elevated areas you couldn’t reach previously. Upon upgrading this ability the bubbles will go all the way to the upper limit of the room you’re currently at, allowing you to come up with even more inventive ways of getting past enemies. Last but by no means least, you have the yellow gemstone which is pretty much an attack ability where you get to “shoot” magic, allowing you to deal with enemies more quickly and opening certain specific doors as well.

The fact that the height of your jump is determined by how long you hold the jump key, as in tapping it will execute small jumps while holding it will result in a bigger jump, makes the game a lot trickier than it might seem at first. Don’t be deceived by the visuals and the simplicity of the early sections of the game or the trailer, because later on you’ll be trying very hard to keep your nerves cool after missing a jump by a pixel, or for missing a timed jump or ability. The 3 gemstones create this sort of trinity which you’ll have to resort to in multiple occasions throughout the game. Sometimes you will be forced to use combinations of these abilities, like having to use blocks to block projectiles, while other times you will have to cross through water with a block and then jump while on top of the moving block, then spawn a water bubble and then destroying a door with the magic attack before hitting a ceiling full of spikes. In short, the game can be extremely challenging at times.

In any case, the difficulty does not come only from the layout of the levels nor the way environmental hazards and traps are placed nor the frustrating way that some traps can kill you in one hit. Despite having a very useful map, navigating throughout all the interconnected rooms and zones can be somewhat of a challenge at times, and there were a few rare occasions where I was lost and didn’t know where to go or what to do next. I believe some sort of indicator on the map or hint would be nice to have. Either you will often be looking for a secret passage on a wall or you’ll be trying to figure out the solution to a puzzle which will unlock a door for you. That said, I didn’t find the enemies to present any sort of challenging behaviour, what I found challenging about them was their positioning, in a sense that very often they would be in the toughest places to reach, thus compensating for the lackluster AI. Probably the most challenging thing are the bosses, which there are a total of 5. They are difficult and challenging but not in a way that they feel unfair, instead, the game forces you to learn their attack patterns and find weaknesses which you can exploit by using your spells 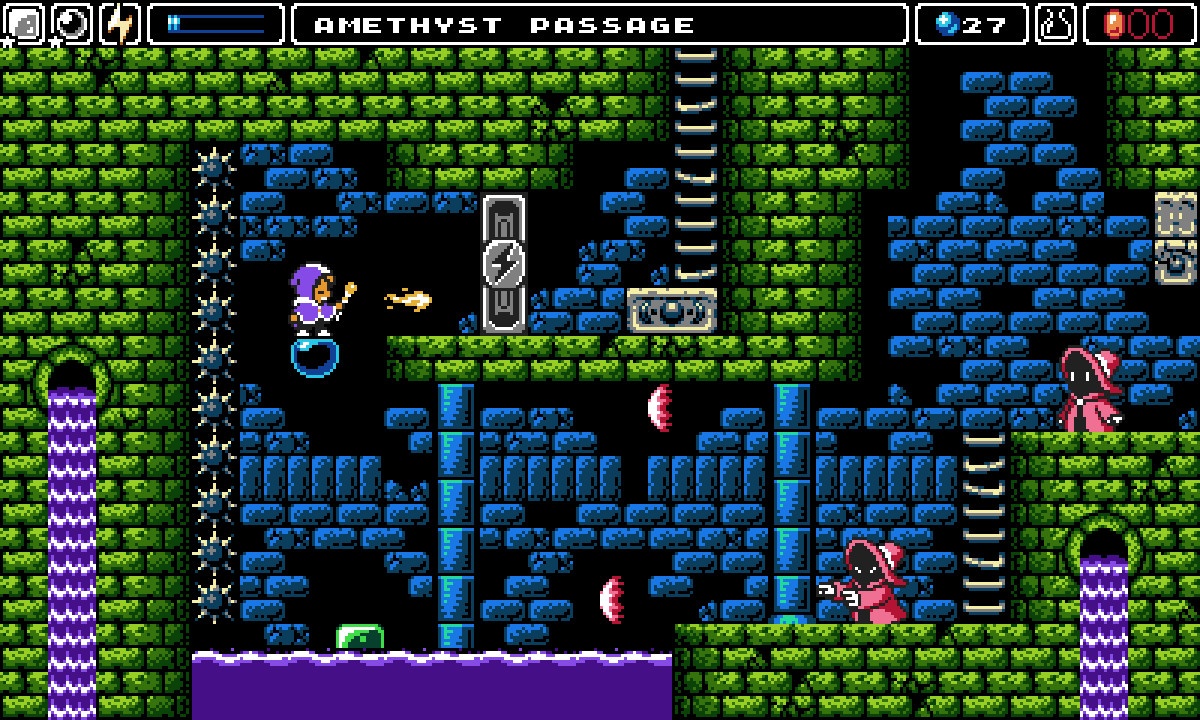 The game does an exceptionally good job in evoking that old school retro feeling. Everything about it makes it feel like it came years ago, back in the NES era, such as the music, the visuals, the controls, the level design. The soundtrack consists in a set of original chiptunes composed specifically for this game which are really catchy and I found myself humming them just a few minutes after first hearing them. In terms of visuals there will be some people who will love how the game looks while some will despite it. Personally I appreciate that there are still developers who try to bring games back to their roots. As someone who didn’t spend much time with a NES, I’m glad that even in today’s age there are these homages being made so that people can get to experience what games were kind of like back in the day but with contemporary levels of polish and refinement.

My only two complaints about the game are the lack of any indications on the map to help the players throughout the game and, second, what I feel to be a very generic and dull story that can easily be missed. With that in mind, the nostalgic music, visuals, sound effects, the tight controls, the feeling of actually getting past an extremely difficult area by your own merit are all here. Alwa’s Awakening is a very nice mixture of old platforming elements with modern ones, which results in a very engrossing experience. The game lasts around 9 to 15 hours depending on how good you are, how much you want to explore of the world and if you want or not to collect everything. With that said, I think that it offers a pretty good value and if you like what you see, the chances are you’ll enjoy it.