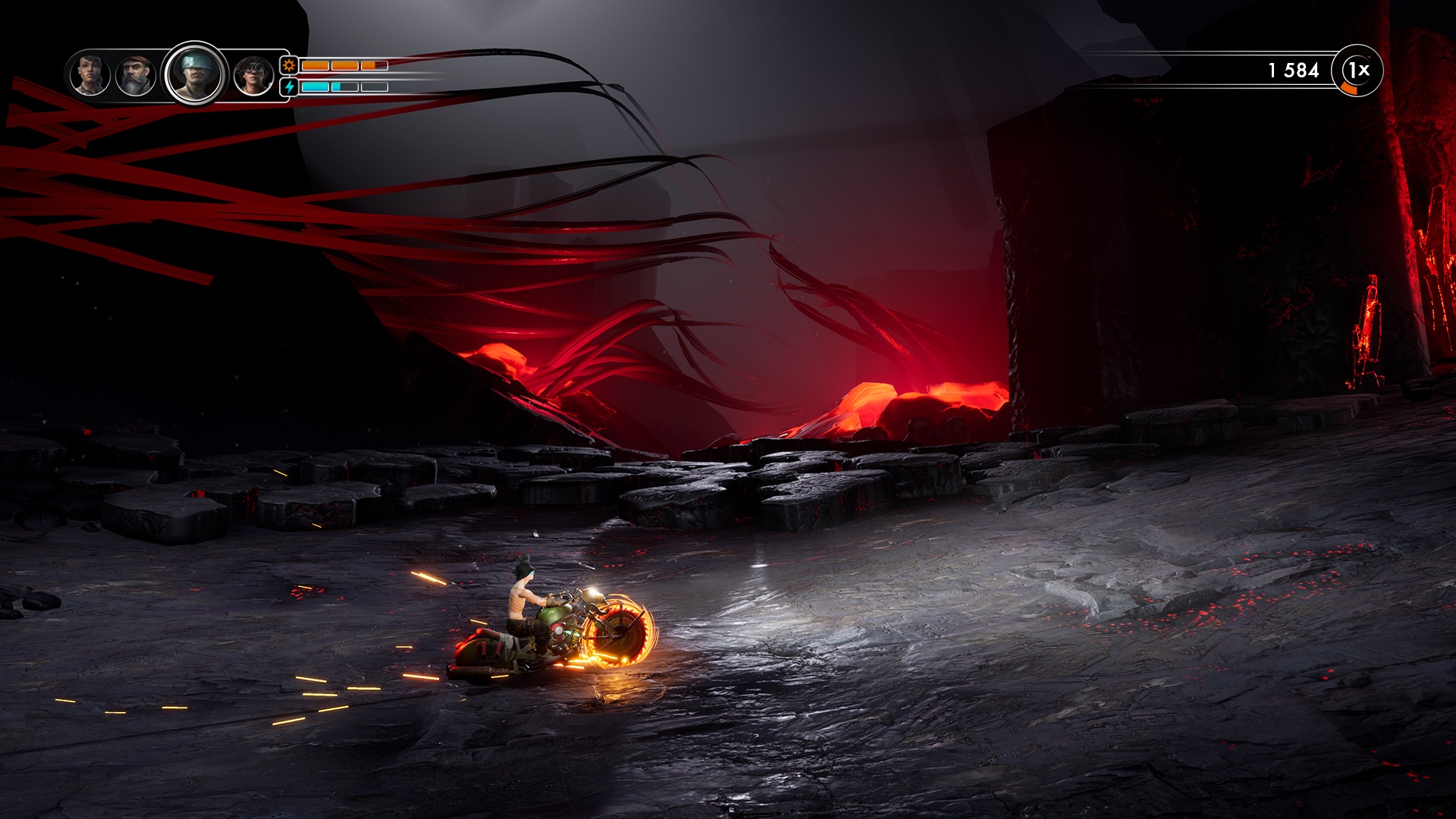 If you have ever read a review of mine you’ll know that I always bemoan when titles have lacking user agency, and when they are nothing more than ‘interactive experiences’. And while some games are nothing more than that – see Telltale Games for reference – then there are some titles which strive to be true to heart video games, but ultimately fail due to limited user engagement and agency. And over the years we’ve had hundreds, if not thousands of such titles as most indie and AA games sacrifice gameplay for the auxiliary features. And while the recently released Steel Rats may look like such title at first sight, then in truth it is far from it.

At its core, Steel Rats is a platform racer which has you move from left to right, and right to left, while reaching checkpoints and destroying junkbots – which are the title’s main cannon fodder. And from such description you could assume that Steel Rats is nothing more than an auto-runner where you watch your bike move from left to right, while sporadically pressing a button. But in actuality, Steel Rats hands the player complete control over the on-screen motorized avatar. And in-fact, it hands one more than just the ability to control the pace, as in-game, the platform on which you move has extended width, meaning that you can move up and down, as well as left to right. 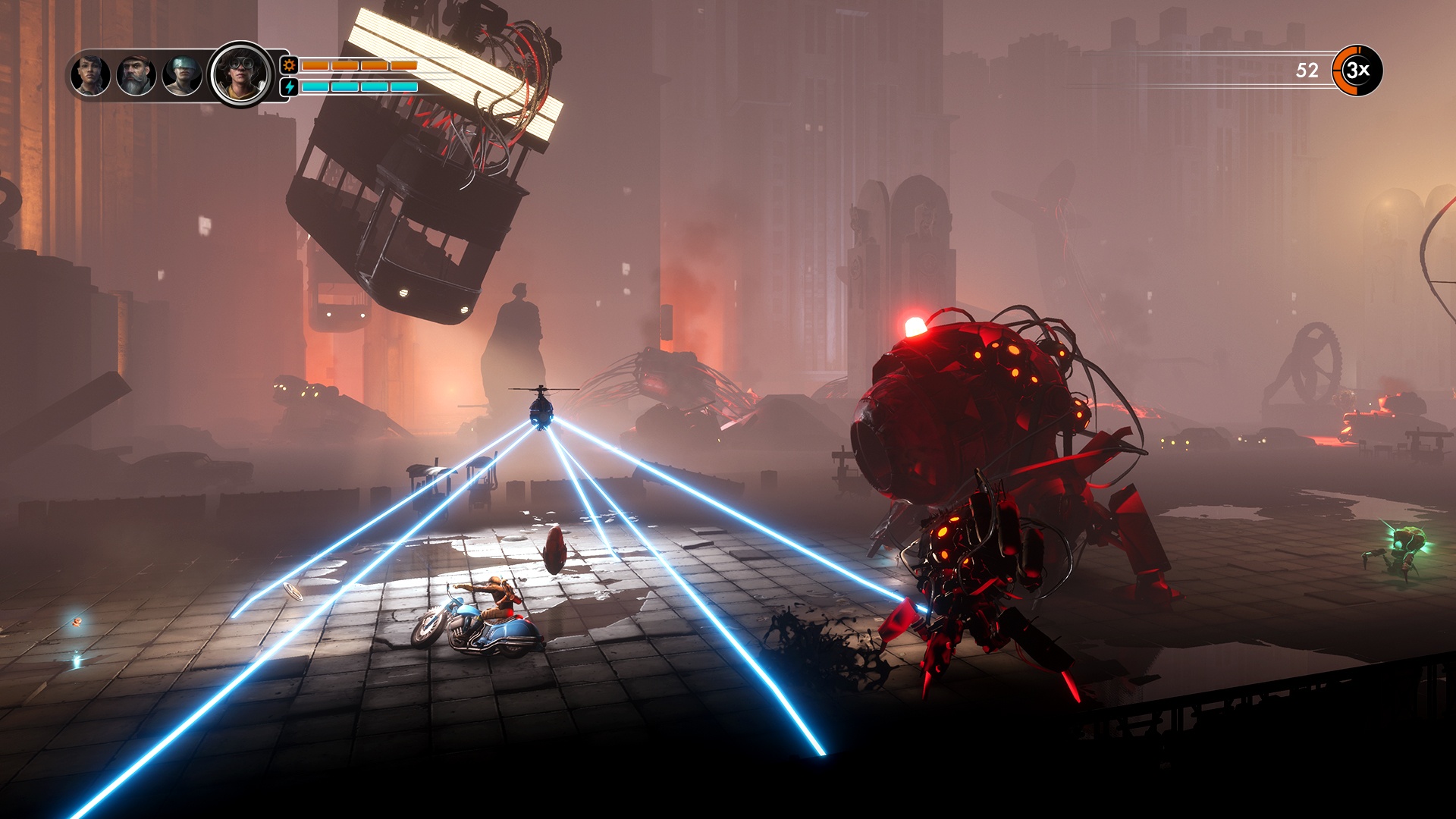 The abovementioned ability has been implemented mainly because Steel Rats features obstacles and hostiles, which can, and at times should be avoided. And while the title at hand does feature a multitude of weapons and other tools of destruction, then more often than not it is just easier to just move out the way. And as beneficial as this mechanic might be, it is not without its flaws, as it is fairly limiting and disallows you from performing any immediate actions, as each and every move takes more than it should – considering the nature of the game. And what makes matters worse is the fact that the title level design doesn’t really suit this particular mechanic, as often you’ll come across things such as ledges, ramps, and platforms which blend into the scenery, and are incredibly easy to miss.

If Steel Rats featured a three lane system, instead of an open platform, then this would allow the title to play out at a much higher pace, as it would simply limit the amount of time that one has to spend messing with the title’s controls. And during my time with this particular game, I’ve spent just as much time trying to align myself with certain objects, as I did actually racing through the levels. And I have to admit, that when the title is in full motion, it is downright superb, but it appears that the developer has done everything that it humanly could to prevent its customers from having any fun; as seemingly each and every new mechanic which is introduced to you from the second level onward, is nothing more than a nuisance.

At the beginning of this review I have mentioned that I dislike games which like user agency, and this may seem a little ironic, but Steel Rats simply features too many gameplay elements, meaning that as VideoGamer UK circa 2014 would say, it is ‘’too gamey’’. And this may sound ridiculous to some, but Steel Rats, unlike the titles from the now defunct Telltale, is simply focused too much on trying to get the player to focus on the gameplay. And ultimately, it discourages one from playing further; as the more one plays, then the more debris he/she has to push through, and you can only force yourself for so long, before calling it quits. 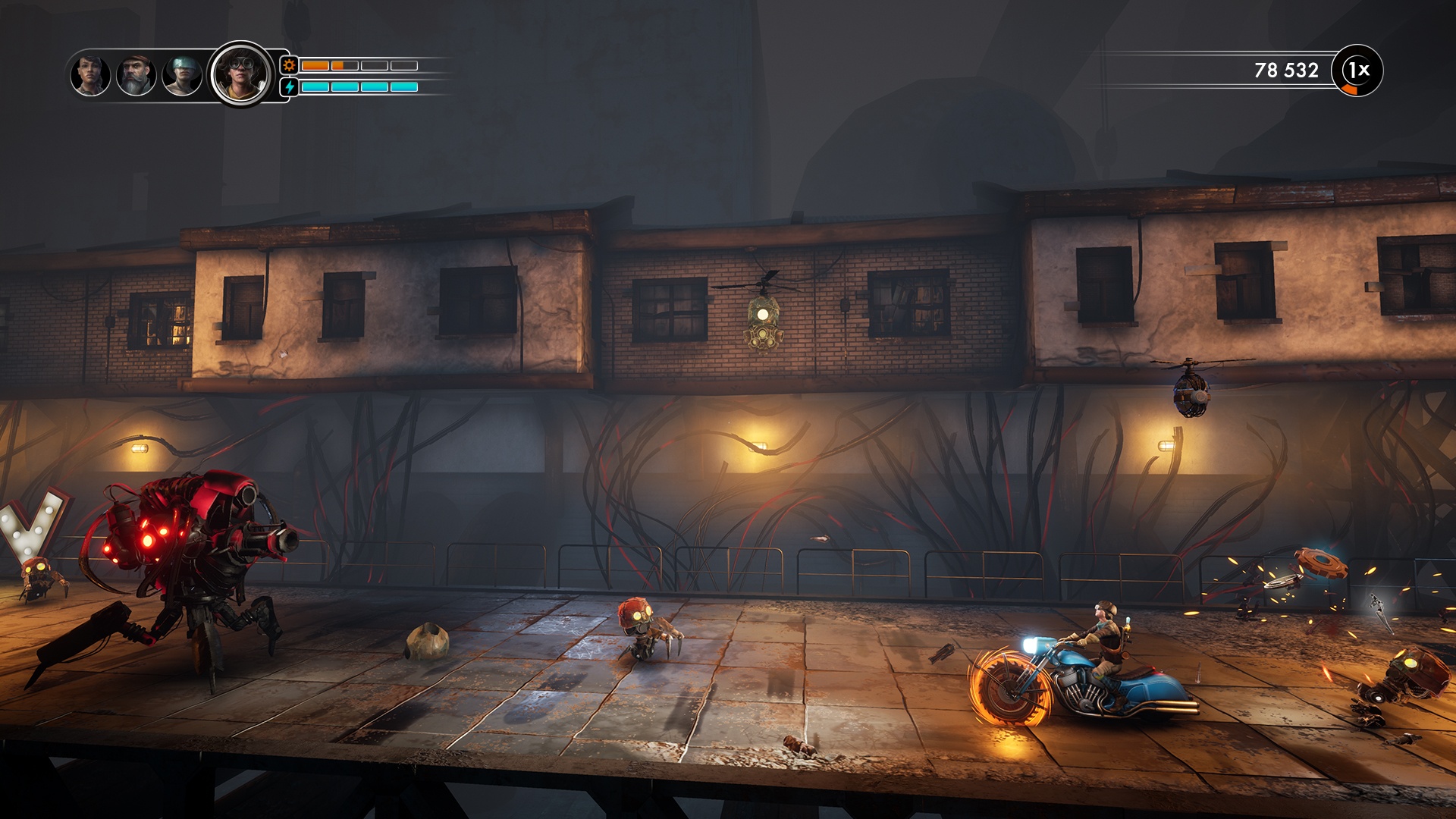 Steel Rats is by no means a bad, or even an average game. As it is full of meaningful content, and features which puts it at the top of the indie hierarchy. It features multiple playable characters, an abundance of skills and abilities, and most importantly, an entire range of varied and distinct gameplay environments, which prevent you from getting bored – while pressing through its story. And yes, unlike most runner-type games, Steel Rats does not just feature a set of loosely connected levels, but a fully-fledged single player campaign, which spans over multiple characters as well as environments. But at the end of the day, it somehow does not feel like a complete product, but a mad scientist’s concoction. As the mix of Steel Rats content is more akin to a trial and error experiment, rather than intricate game design.

Steel Rats is an incredibly strange game, and that’s not because of what it is, but because of how much it offers to the player. And while it is enjoyable for the most part, then unfortunately, it simply doesn’t hold itself together as tightly as it should, in order to provide one with a completely satisfactory experience within the runner/platformer genre. And if only the title’s controls were a little more coherent,  if the button layout was a little tighter, and if it didn’t try to feature so many needles features down one’s throat, then it could have been something truly special.

To conclude, all that really has to be said about Steel Rats is that it is a solid experience, but also one which is not exactly coherent. And it does seem a little lost, but not within the market, but within itself. As for the most part, the title at hand appears to be confused.  As on one hand, it tries to make its gameplay its main attraction by adding ever new features and elements, but on the other,  it clearly wants to be a narrative experience, but due to its limited indie nature it unfortunately cannot be both. And the result is fairly disappointing, as Steel Rats could have been something truly special, if only the studio behind it focused a little more on either part of the above-mentioned title, rather than on both simultaneously.

Steel Rats could have been something truly special, if only the studio behind it focused a little more on either part of the above-mentioned title, rather than on both simultaneously.