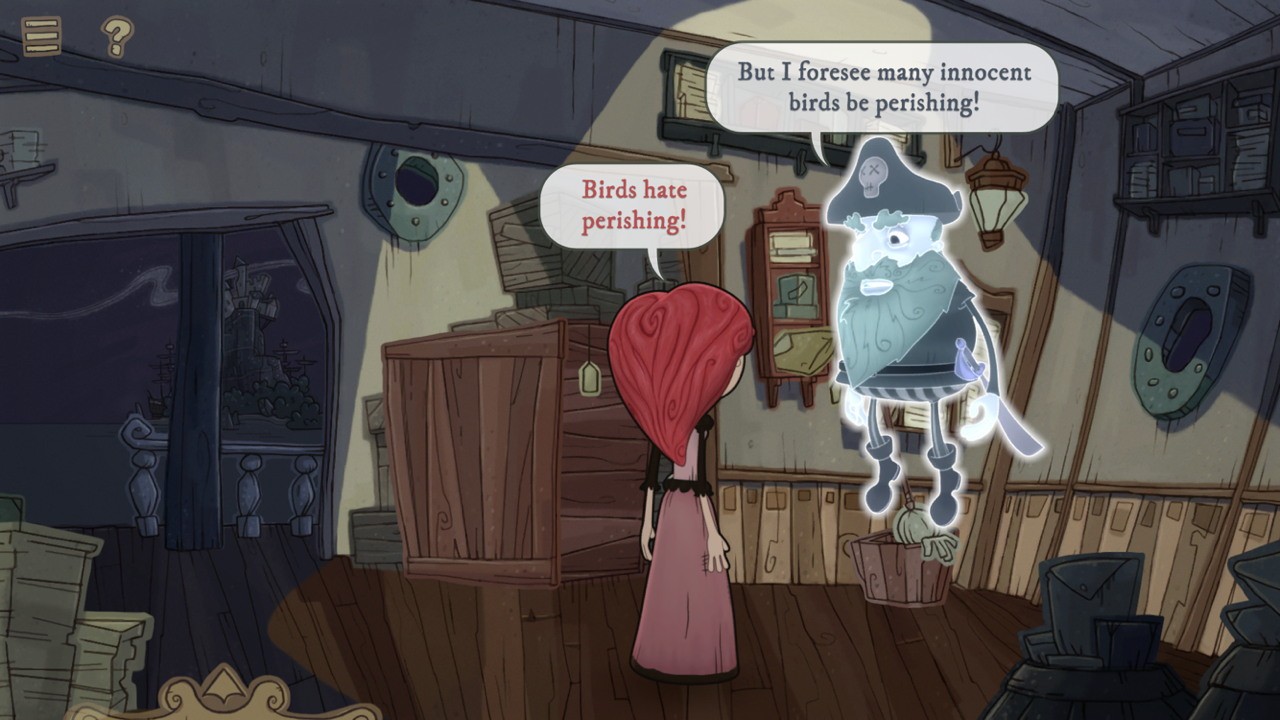 So far this week I feel a little bummed out that a pirate title I reviewed wasn’t as I had hoped. As a fan of these loveable rogues, I’m always keen to play one as my chances of sailing the high seas with my stomach is unlikely, plus I’m most likely to bring a rubber chicken with a pulley in the middle to a sword fight. If you like adventure games, you’ll get that Monkey Island reference and be pleased to know that Nelly Cootalot: The Fowl Fleet is another pirate adventure on the Nintendo Switch.

I got the impression that Nelly Cootalot was a well-known franchise before playing Nelly Cootalot: The Fowl Fleet. Personally, I’d never heard of her until I saw there was an adventure game available to play on the Nintendo eShop. The added bonus of it being a pirate based story only added to my excitement in taking this for a spin. By the way, when I say spin, I don’t mean I was aiming to play for an hour or so. Nope. I saw this out to the end before giving you this appraisal.

You don’t need to have played a Nelly Cootalot game before this as I hadn’t, and could get stuck into it right away. However, I did want to dig a little deeper, just in case this was based on a kid’s show, a successful series of books or a popular politician. Hardly. Interestingly, Nelly Cootalot came about by a one-man-band; a chap named Alasdair Beckett-King, for his girlfriend (based on her and who voices the character too), later making the first game available for free on the interwebs. The overall production differs from Nelly Cootalot: The Fowl Fleet as the latter is much more polished in terms of presentation but impressive that it garnered enough interest for a Kickstarter campaign for this sequel. 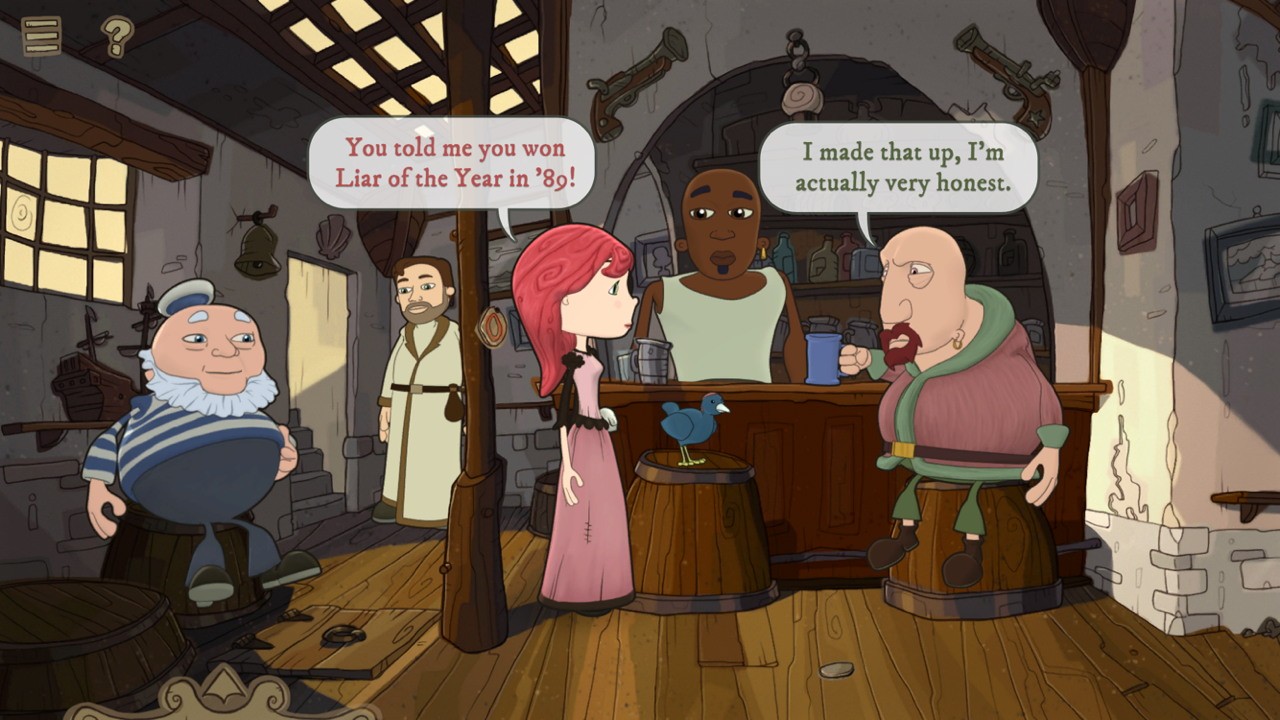 As I said, you don’t need to know about the previous story, but I’d recommend looking into it yourself as I will be. In Nelly Cootalot: The Fowl Fleet, the story begins with Nelly located in the mailroom. Her mentor, William Bloodbeard appears as a ghostly apparition and informs her that his brother and rival, Baron Widebeard, is up to mischief and only Nelly can stop him. She needs to get to the next island, so your task is to find a way to get her there in a typical point and click manner. That’s right, Nelly Cootalot: The Fowl Fleet is a 2D point and click adventure game. Woot!

Much like one of its infamous predecessors, The Secret of Monkey Island, Nelly Cootalot: The Fowl Fleet is a pirate game packed with hilarity and dialogue that genuinely makes you chuckle. But Nelly isn’t tiptoeing in Guybrush Threepwood’s shadow – this is very much a standalone franchise and not some fanboy clone. The artwork, while very child-like (in a good way), is very nice and the backdrops often beautiful. The animation is good too, but due to the nature of a point and click, it isn’t a standout feature. What stands out in Nelly Cootalot: The Fowl Fleet is the dialogue and voice acting.

I won’t lie, the voice for Nelly put me off a bit as I couldn’t work out their accent and if they were putting one on. After half an hour or so, I completely forgot what I was niggling about as the leads’ delivery of lines is absolutely brilliant, and I felt utterly charmed by Nelly (or Rachel, the talent). You can’t help but compare to The Secret of Monkey Island because of the wit, but this is very British in it’s subtlety and execution. That’s not to say that this will put off anyone not associated with Pudding Island, but it’s a particular style that is refreshing to see in a game. The presentation would appeal to children on the surface as it looks like a picture book, but the dialogue and themes, while not overtly mature, can certainly be appreciated more by an older audience. As a big kid, I was happy either way, but best of all, this is one you can play with your kids without fear of them repeating an embarrassing word or two. 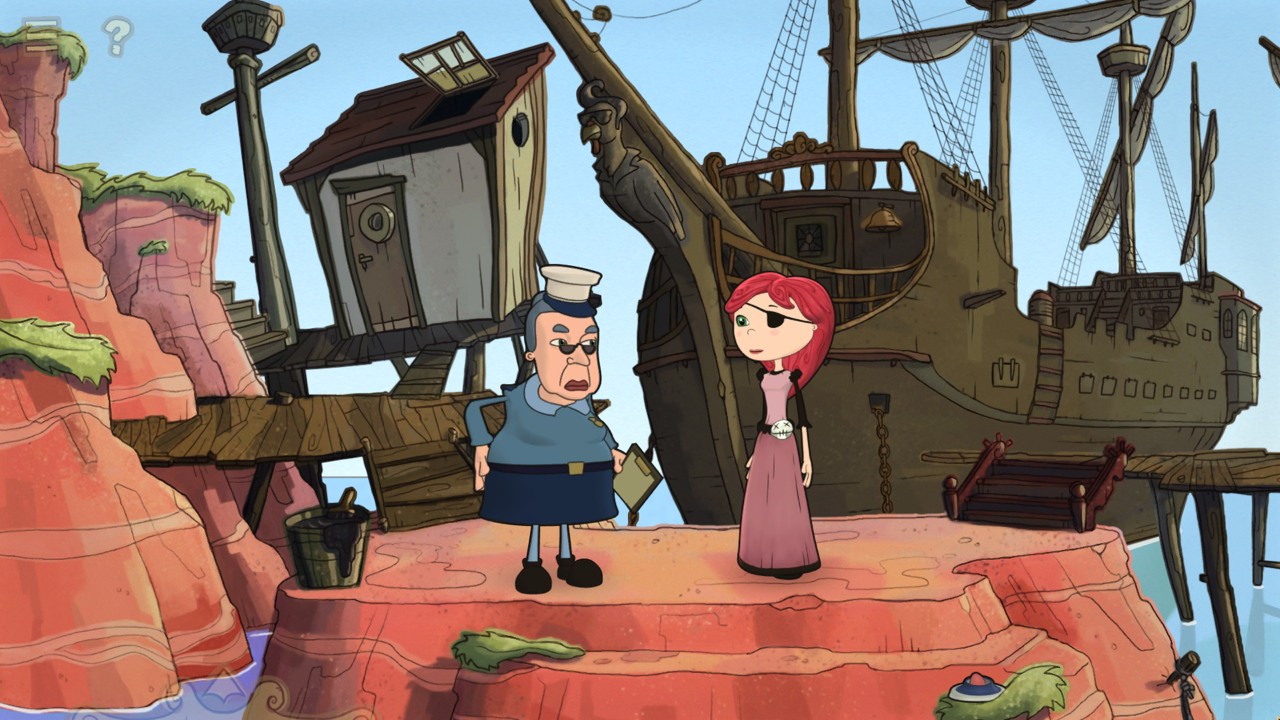 Controlling Nelly and interacting with her world is straightforward. You can use the left stick to move her around and the right to interact. I did note that she didn’t move around the scenery as much as I’d like to and would crash into invisible walls a little. It wasn’t a big deal for me at first, but when going back and forth on fetch quests, I often fumbled about when using the joycons. On that basis, I went for the touchscreen instead. Like some of the newer adventure titles we see, if you press X, you will get icons for everywhere that can be manipulated and who you can talk to. For the Y button, this will bring up your inventory to inspect, use with people or items and also combine into something more beneficial. You can use either B to inspect or A to interact, alternatively touching a point of interest on the screen gives you the choice of inspect or interact.

Everything in Nelly Cootalot: The Fowl Fleet feels nice, and I mean that in the best way. The visual presentation is really great, the puzzles and interactions relatively intuitive and the difficulty not off-putting in the slightest. I mentioned that the dialogue is the strongest part of the game; it is really well written and executed by a great cast, including Tom Baker. If you’re a sci-fi nerd, unlike me, you will know him from Doctor Who, but if you’re a comedy geek, like me, you’ll be more familiar with him as the narrator from Little Britain. He’s perfectly cast as Nelly’s companion, Sebastian, but in my opinion, Nelly is the character that shines the most.

One feature I have to highlight is the included commentary from the creator, Alasdair, and his girlfriend, Rachel, who plays Nelly. If you were fortunate enough to remember DVDs when they first came out, the special ones used to have an audio commentary by the director and cast. They were sometimes hit and miss but would run through the duration of the film. This could either enlighten you with one of your favourite scenes or possibly ruin it as to how mundane it was to produce. Well, in Nelly Cootalot: The Fowl Fleet, a little speech-bubble appears in the top of the screen to indicate that there is new dialogue to play. It’s totally optional and doesn’t ruin the game as they are snippets into the making of the game. Alasdair obviously leads the conversation due to his input, but the chemistry between the two and what they talk about is a lot of fun, and I found myself looking forward to these little insights while still playing the story for the first time.

So how long can you expect to share the company of Nelly and her friends? Well, that depends on you. I stopped to take in all the dialogue choices, the commentaries and the artwork and if you’re going at that pace, I’d say you can finish with moderate play within a week. Alternatively, you can blitz it and do it in a day. Why you’d want to do that, I don’t know. When it’s all done and dusted though, does it warrant a playthrough? If you like adventure games, sure. Full Throttle came out in the mid-90s, and I’ve completed it at least a dozen times. The same for many other point and clicks, so I’d happily add Nelly Cootalot: The Fowl Fleet to that list. I’d even encourage looking into the earlier game as it’s also available on the Switch in HD format, but bear in mind, this is a re-release of the game Alasdair did on his own. You’d be a fool to compare the presentation, but if it’s as good as the story and dialogue here, it will be another winner.

This is how you do a pirate adventure game that doesn’t emulate The Secret of Monkey Island. A great protagonist, witty dialogue and a pleasurable adventure.