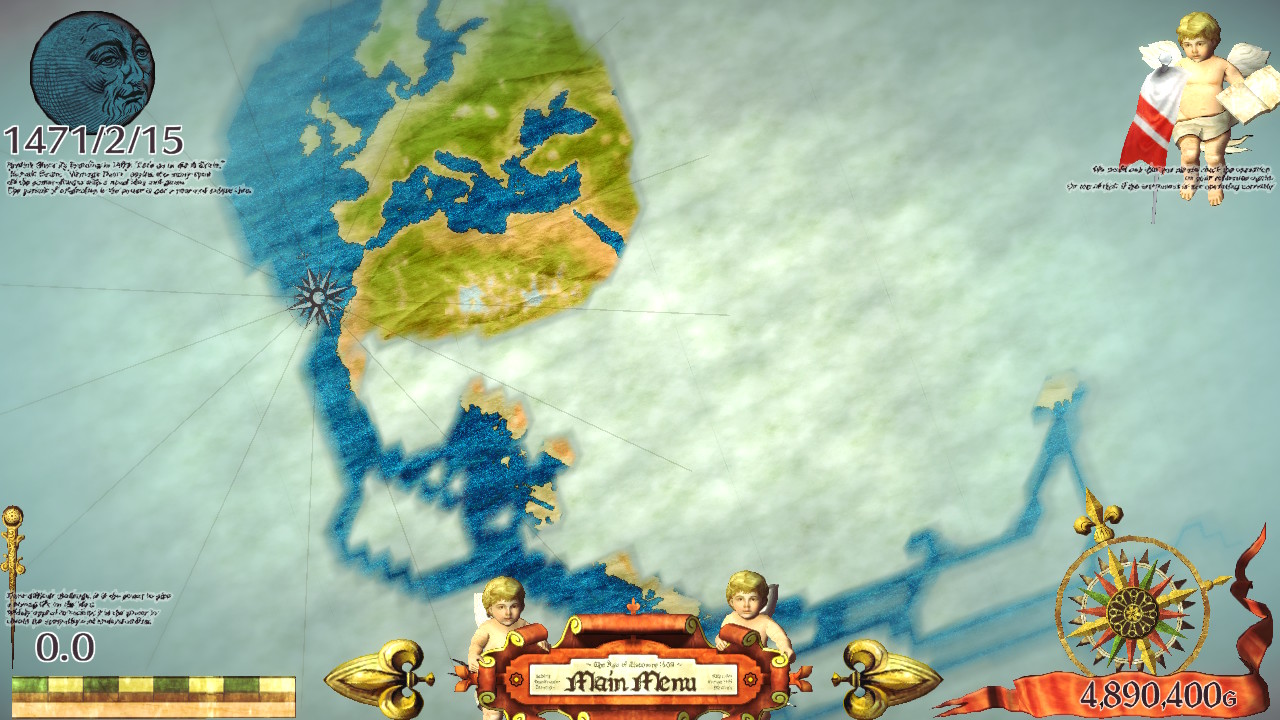 In European History, the sixteenth century bore witness to the golden age of exploration; a period of seafaring adventures and routes that mapped the world as we know it today and set up the lucrative industries of world trade. Neo Atlas 1469, developed by Artdink and published through Arc System Works, simulates this period of discovery as it now plots a new course towards the Nintendo Switch.

The game tasks you with revitalising the fortunes of a once prosperous trading company, whose lead admiral disappeared two years previously after an altercation with Pirates; leaving the business teetering on the brink of bankruptcy. Aided by Miguel, an entrusted advisor, you set about recruiting a new admiral from the company’s base in Lisbon, Portugal, in order to investigate the disappearance of your lead admiral, as well as set up new trading opportunities and explore the undiscovered regions of the world outside of Europe. Your quest begins with an extensive tutorial; one that can last anything up to an hour with its explanations of the game’s mechanics and staggered unlocks of its menu’s options. However, once completed you then have overall control on how you run the business; from recruiting admirals, building fleets, setting up trades and plotting exploration routes. Despite a vast amount of micro-management options, they rarely become over-complicated and, along with Miguel’s helpful advice, become easily manageable.

Much like Sid Meier’s Civilisation Revolution, the game world is largely shrouded by cloud cover, with only the Western hemisphere of Europe available to view. By setting up smaller trades with your European allies, you begin to build a financial stability in order to help build further fleets in your quest for world discovery. This soon becomes the main staple of the game’s mechanics, as through the discovery of further lands and continents, the more options open themselves up to you, thus increasing the amount of trade, opportunities and landmarks from which to gain your monetary rewards. However, take on too much too soon and the financial strain on the upkeep of your fleets can lead to the trading company making a loss; become bankrupt and it’ll soon be game over. 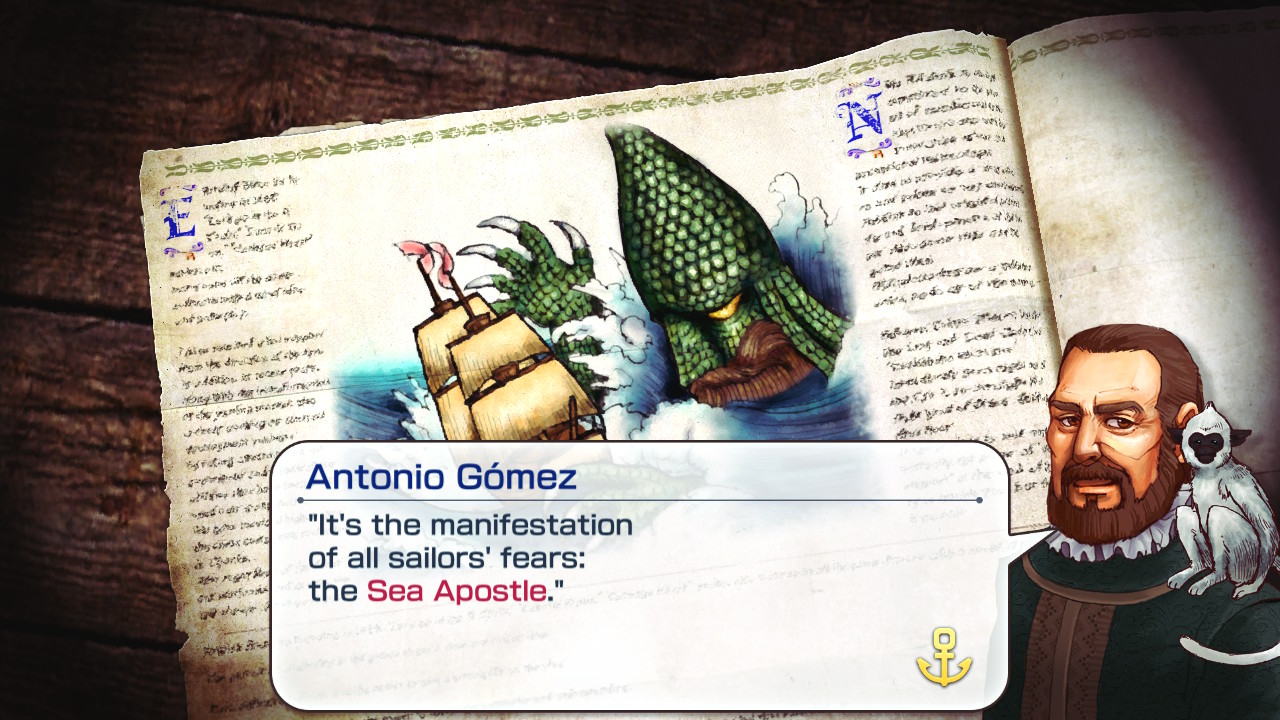 As you progress, the more opportunities arise in recruiting various admirals. Each one possess a variety of specialist skills, from explorers, divers, fighters and scientists that prove invaluable in given situations when they arise. As you begin to explore the world around you, various discoveries will need to be examined more closely by the skills of each respective admiral; thus opening up or completing any quests through investigation. In order to make these discoveries, you need to utilise your fleets to clear the shrouds of cloud cover that engulf the rest of the world. By plotting a course for them, your ships set sail on their voyages, before returning to their home ports to report their findings to you. This is where a lot of the fun lies within Neo Atlas’ gameplay, as with each admirals’ return, they spin a yarn on whatever they may have encountered on their journeys, from new lands, pirates, storms and sea monsters.

These seafaring stories begin to shape the game and the world around you, as with each discovery your admirals make, it is your final decision to either accept or dismiss their tales that shape the undiscovered country. Don’t believe that the world is round? Then make it flat. Can’t accept that the Kraken really exists? Then make it extinct. Want to change the shape of the African continent? Then alter its appearance. This mechanic of the Neo Atlas’ gameplay produces a title that contains near-infinite possibilities in how you structure the world with its procedurally-generated landscapes. Once an admirals’ tale is accepted, the cloud that covers their journey and discoveries lifts, revealing coastal towns, cities and ports, new tradeable items and locations that may need further investigation; such as shipwrecks, treasure chests, buildings, pirates as well as many other mysteries that reveal themselves after being discovered.

In order to sustain the funding for such expeditions, it is important to set up profitable trade routes. These can be set up by selecting the various commodities that are abundant within the revealed towns, cities and ports and trading them between the two industrious locations. Some of these items can even be amalgamated to produce a completely new, more profitable, commodity. As well as trading to achieve sustainability, you also get rewarded for new discoveries throughout the world and receive special payments from dignitaries in need of your services through several missions, or chapters, which can be worked towards whilst exploring the world around you. The need to keep a steady stream of funds becomes paramount as you, not only need to create new fleets but need to keep them afloat by conducting repairs, paying admiral wages and outfitting your crews with newer, faster styles of shipping. 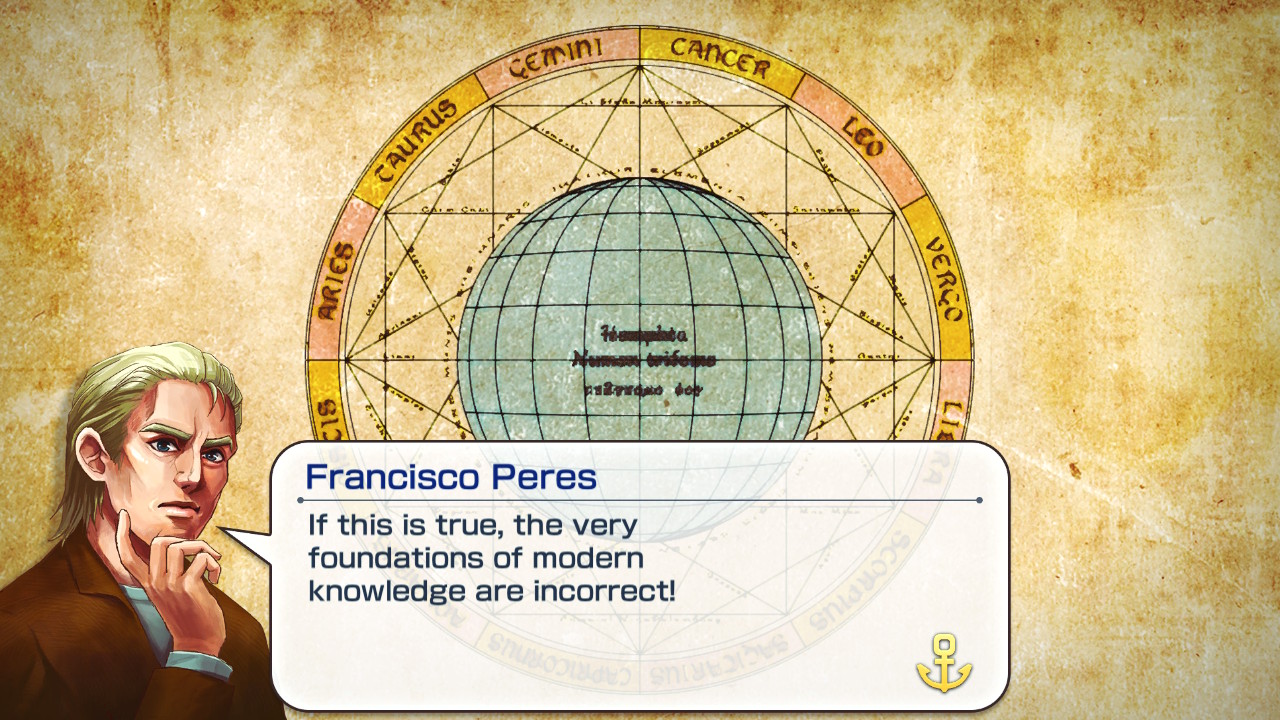 There is plenty within Neo Atlas’ gameplay to keep an eye on as you uncover the world around you; though it rarely feels inaccessible or complicated to follow through. This is mainly due to a wealth of advice from your advisor, admirals and other visitors to your trading company. This helps to maintain a level of freshness, along with the constant rewards for discovery, from the slightly repetitive nature of failed sorties and trade hunting. Although the majority of your time within the game is spent repeating actions, it has a draw that keeps reeling you in over the extensive play-time that this title offers. Its ease of use and control, utilising both touch and conventional methods, create a deep, yet simplistic, level of interaction within the mechanics of its gameplay.

Overall, Neo Atlas 1469 offers a package that contains a depth as deep as its oceans, a mechanic that is plain sailing and an excitement in its discoveries. Graphically, the game possesses a template that is neither ground-breaking nor poorly executed, but then it doesn’t really need a fancy presentation, as the fun of this title lies within the physics of its business model and the mysteries of discovering the uncharted world around you. It has a very addicting quality to its gameplay, drawing you back in time-after-time in its quest of making money, revealing the new world and mission structures that add to the playability of the game. Along with its procedurally-generated land mass and ever-changing mechanics from your own decision-making, this is certainly a title that contains a near-infinite life-cycle. The whole experience suits the portability of the Nintendo Switch perfectly, allowing you to save your game whenever you feel, making it perfect for casual or more dedicated players alike. In terms of value, this simulation of the golden age of discovery, has led to a title that also contains a golden age in its level of addictive and intriguing gameplay.