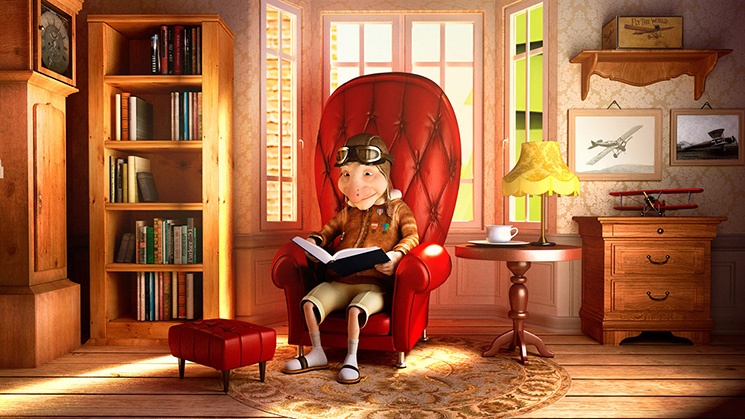 These days, I quite often see people bombing around shopping precincts and along pavements on their mobility scooters and I think to myself: ‘What’s the rush?’ Well, now thanks to Coffin Dodgers, a kart-style racer developed by Milky Tea and published by Wales Interactive, I now know the answer to that question as the game comes scootering onto the Nintendo Switch.

Set within the peaceful surrounds of Sunny Pines, a sleepy retirement village, a group of old-aged pensioners strike a deal with the grim reaper after he pays them a visit in their sleep; notifying them of his intention to steal their souls in three days’ time. Feeling that they’re too young to die just yet, the pensioners challenge death to a series of races, using their mobility scooters, in order to take control of their own fates and fight for their own survival. With a selection of seven playable characters and an option to unlock the reaper, you battle your way through thirteen courses in a quest to save your soul.

The inclusion of a story mode within this style of game is a nice touch here. With its amusing plot and setting, it sets an exciting premise to the racing element, as well as a legitimate reason for doing so. Set around four different locales of the retirement complex, namely the village, town, farm and graveyard, each setting requires you to compete in a series of three races each, with a final showdown that take place across all of the locales. Racing for points, a championship table determines which of the residents will lose their souls, with the last placed competitors sealing their fates. With each demise, each character is replaced with a zombie which keeps the momentum of battling for places going. Providing that you qualify from each of the preliminary rounds, you get to face death in a final race that you must win in order to keep your soul intact. 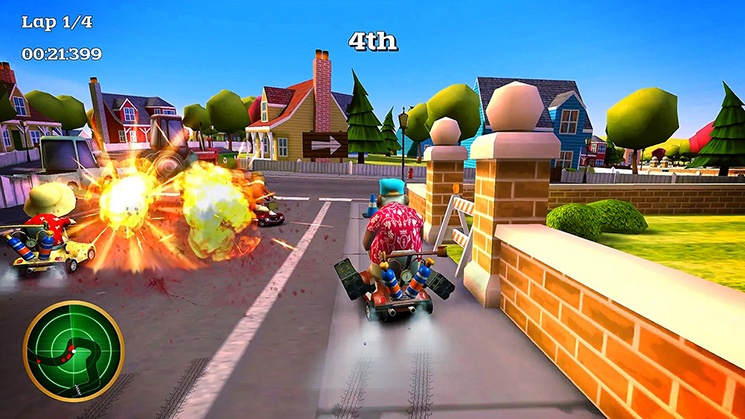 As with the majority of kart racers, each track contains a number of power-ups that can equip your scooter with a variety of weapons as well as some defensive items. You can also utilize a melee attack by waving your walking stick in order to knock your competitors from their own mobility machines. The races themselves, offer a nice mechanic with their execution. Each track is nicely detailed with bright and colourful graphics and just about offers enough variation in their aesthetics. There are various hazards too, that can hamper your ability to race, such as avoiding the beams of overhead UFO’s, hordes of undead zombies that line the streets and underground trains as your race through the subterranean subways. Your competitors can provide stiff opposition too, although that being said, it can also be too easy to find yourself so far ahead of the pack, that it is near impossible for them to catch you. Despite this, the racing element can be a lot of fun.

As well as the story mode, the game also contains other modes such as time trial, free roam, a mini-game styled race entitled Crazy Grandad as well a local multiplayer element for up to four players. The time trial mode offers the usual timing element of trying to beat your own personal records. The free-roam, or exploration, modes allow you to traverse the streets of Sunny Pines, in both single or multi-player modes, as you see fit; although various markers set around the town can set up various races for you and your friends to partake in. However, these races don’t offer any variation from those found within the story mode. Crazy Grandad brings a mini-game element to the title that pits you with finding various items that are littered around the town within the limits of a time constraint. Finding each item increases the timer and an on-screen pointer points you in the general direction of where the next item is placed. However, I found this mode largely redundant in its execution and rewards in its participation.

Each of the mobility scooters can be upgraded through the use of coins that can be won from completing races. However, these coins can only be acquired through the story mode element of the game. Paint jobs, body modifications, weapon counts and the usual engine upgrades can be purchased here. After a couple of playthroughs of the story mode, which incidentally take, on average, around thirty minutes to complete, it is possible to upgrade your scooter to such a level that none of the competitors can keep up with you, which in turn, ends up taking a lot of the fun out of the racing element of the game; for a game that is primarily a racer, this is a very worrying concept. You also earn XP from colliding with various obstacles and completing races, but I could find no reason, or use, for acquiring these experience points. Again, another strange and worrying element. These upgrades are the only way you can add a bit of variety to each of the races, as even though you have a selection of characters to choose from, none of them differ in any way when it comes to the capabilities of being a racer, which is a shame as this is possibly a very missed opportunity from the developers. 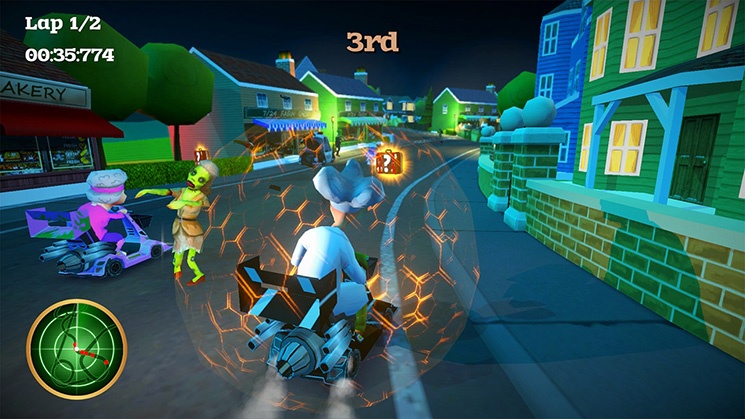 Overall, Coffin Dodgers does offer a nice variation within the karting genre. Its races are genuinely fun, with nice handling, good track layouts and variations, a story mode and challenging competitors. All these mechanics add to produce a very solid and fun experience. However, with that being said, these elements are just the basic functions that should be found within every type of racing game. The problems begin to arise with the variation of content.

Apart from the story element of the gameplay, there really isn’t a great deal more on offer. What there is, isn’t really enough to keep your interest over the long-term and with the story’s short length of playing time, is also a mode that will tire quickly. The local multiplayer element offers a lot of fun and, probably, the most long-term appeal; it’s just a shame that the developers didn’t incorporate an online multiplayer as this would have easily boosted what the game has to offer. It’s not that this is a particularly bad game, or its gameplay is poorly implemented, it’s just that what it has to offer, particularly in single player, just isn’t that interesting to play. The game is ideal if you want to flit away five minutes, or kill an hour, but past this, the game just seems to recycle itself as you constantly re-tread old ground. It’s a shame really, as I really want to like this game and there is a lot to this game to like. As a basic foundation to a good kart-racing game, Coffin Dodgers stands well, but not enough has been built around this, and this ultimately leaves the game with a feeling that it is merely above average at best. With a bit more thought and effort, this would be game that could easily rival Mario Kart, however, as it stands at present, it’s just another racer that I feel won’t be able to dodge its inevitable coffin.