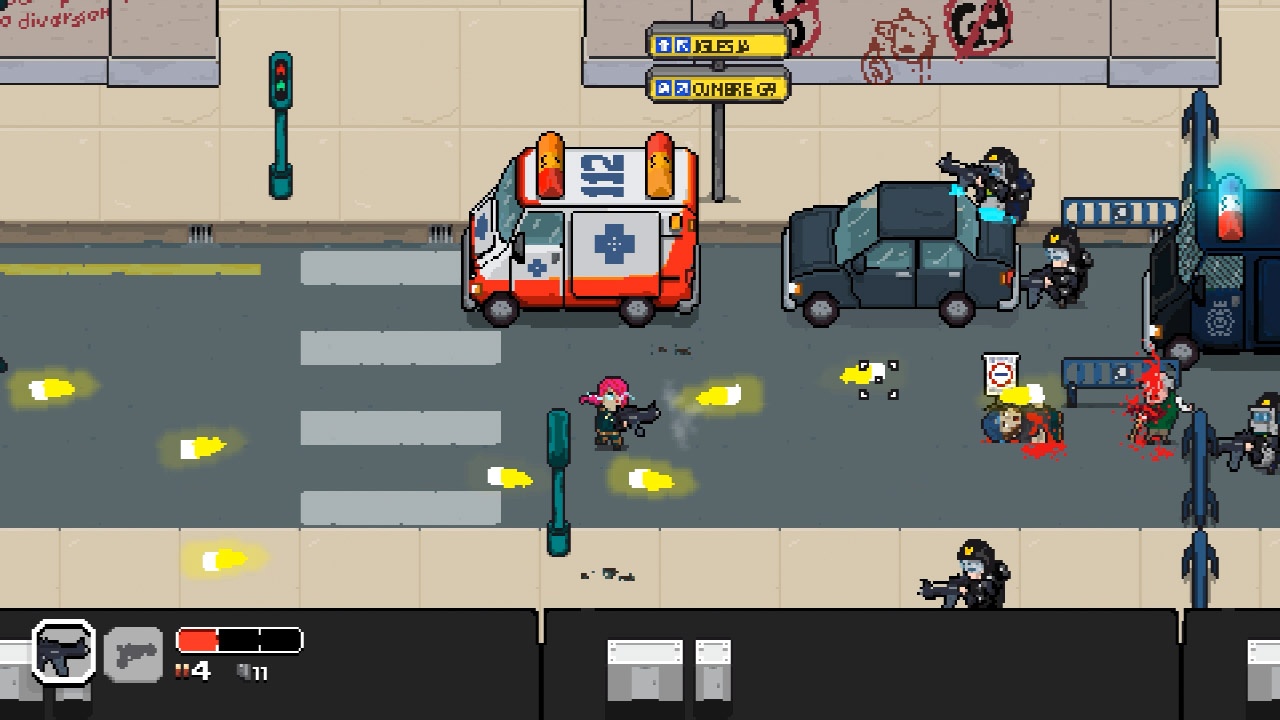 When most people think of twin stick shooters, they tend to think of the kind of bullet hell, high-paced mayhem made famous by the likes of Geometry Wars, Nano Assault and Super Stardust Ultra, but recently, thanks to games such as Hotline Miami, and to an extent, Arrowhead Game Studios’ exceptional, Helldivers, the genre has taken on a more tactical and deliberate pace. The mayhem is still there of course, but these games ask that you at least give a modicum of thought before pulling the trigger – the same is very much true of Santa Clara Games’ incredibly violent, occasionally frustrating but always compelling, 8Days.

Infused with a satirical tone that embraces the darker side of comedy, 8Days, while far from being a laugh-fest, does benefit from the bleak sense of humour that bubbles beneath the surface and a clear love for the gung-ho nature of 80s movies and Reagan-era American politics. It’s dark, it’s a little bit twisted, but it confidently embraces the absurdity of it all, making for a game that seems perfectly befitting of its 8-bit art-style and Cannon Fodder-esque uber violence.

With its simple but decidedly apt aesthetic and its relatively rudimentary control scheme, 8Days is the epitome of pick up and play. Thing is, once you pick it up, it probably won’t be all that long until you die….and die…..and die. It’s not quite Dark Souls difficult, but like Hotline Miami, this is an unforgiving experience that punishes wild gunplay at every turn. Sure, letting the bullets fly can get results, but if you’re looking for sustained success, you’ll need to approach each stage more like a puzzle than a shooting gallery. 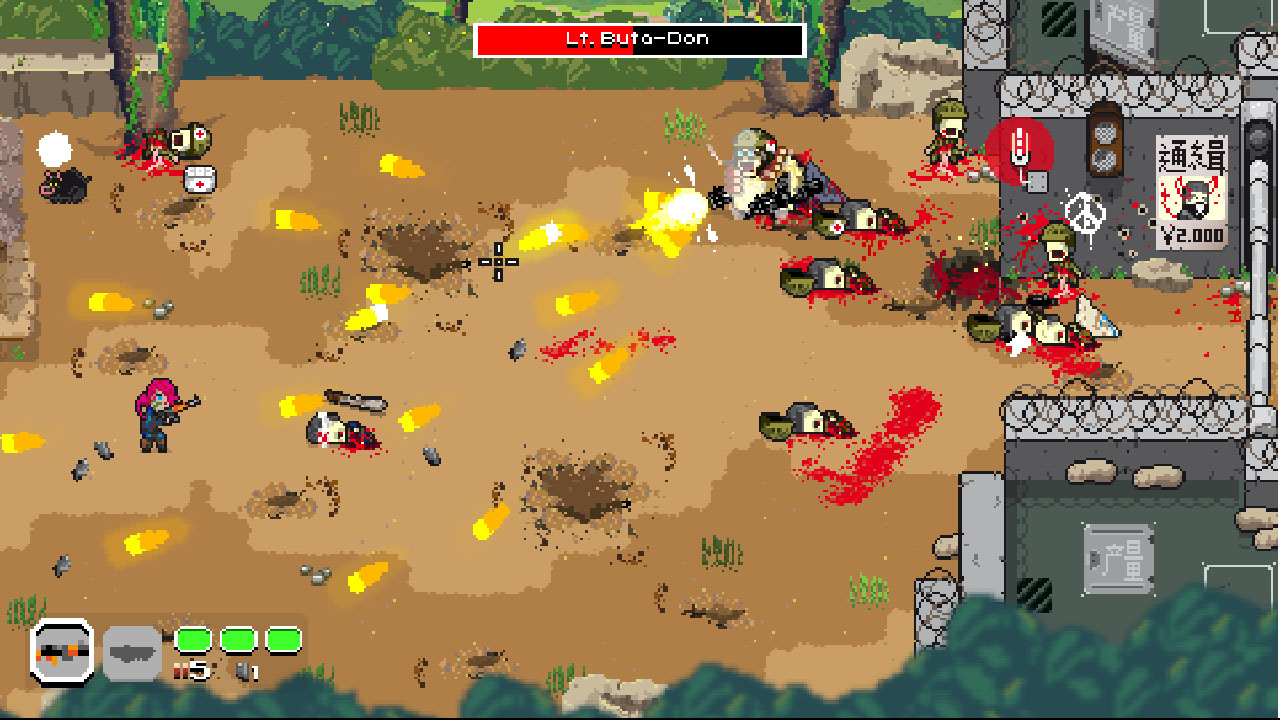 Each mission is split up into a selection of smaller areas that essentially work as checkpoints. Few are all that interesting from a visual perspective, but they are functional and make decent use of the games’ 8-bit art style. Each section is usually home to a small number of enemies that have to be dispatched or avoided before moving on. Sure, you can sneak past a few, but the mechanics aren’t really built around sustained stealth with the best option being to get the drop on enemies so that you can at least take the first shot.Most enemies only take a shot or two to take down, but equally, the same is true of your (anti) hero of choice. Whether you pick Lola Cruz or Mike Doe, it only takes 3 shots to take you down, and with enemies firing large projectiles and often proving very proficient in guessing which way you’ll move next, engaging in all out warfare will often end in tears and a trip back to the start of that section.

Some of the checkpoints can be a little awkward and you can occasionally find yourself stuck with very little health and a long journey to the next save point. It’s not game breaking, but for a game that will test your patience at the best of times, it’s these types of design choices that will ultimately prove the straw that breaks the camel’s back for some players. 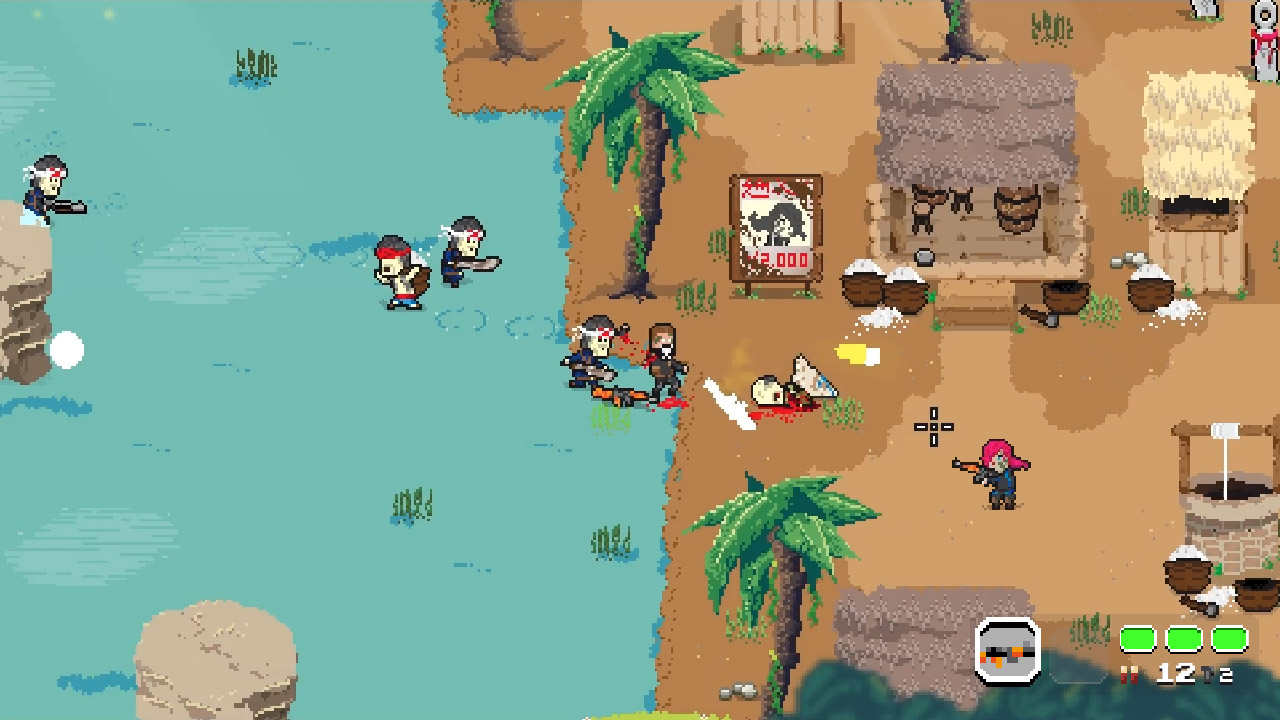 Still, beyond the occasional dodgy checkpoint, what keeps this game so addictive (despite all the dying that you’ll likely be doing), is just how fair it all feels. There are no outrageous difficulty spikes here, no insurmountable challenges, just a steady stream of enemies that will kick your ass if given half a chance. Whether it be a missed shot or a poorly timed reload, death in 8Days is nearly always avoidable.

It might not be the longest game in the world, but with plenty of challenge and great local co-op, Santa Clara Games’ 8Days delivers a brilliantly unforgiving retro gaming experience that celebrates the ludicrousness of the 80s while adding enough in the way of new ideas to make it feel like a relatively modern gaming experience. The visuals are occasionally bland and the checkpoint system can prove problematic, but despite these issues, 8Days remains an incredibly addictive, highly challenging and largely enjoyable shooter.