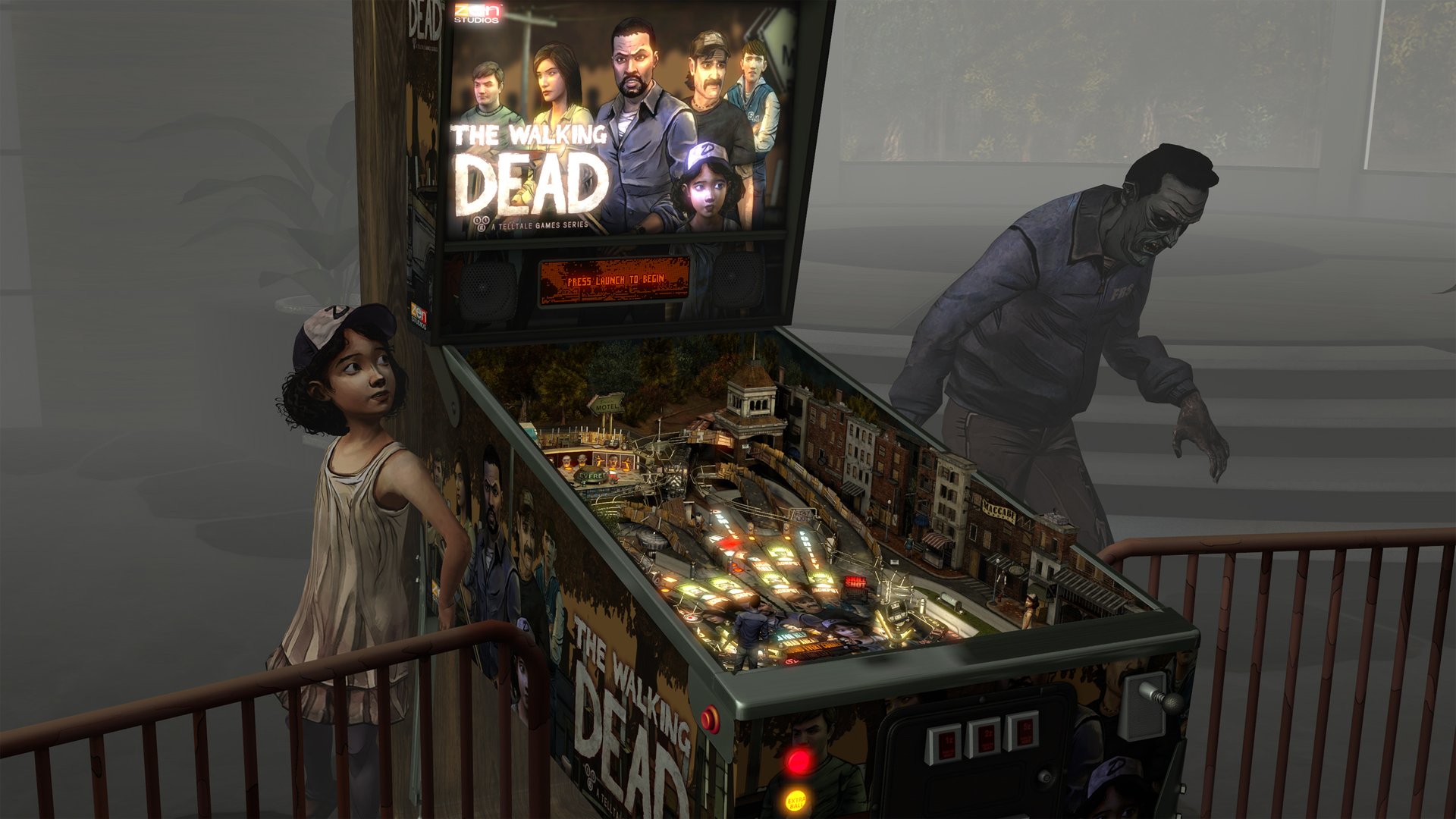 Over the past week I have been spending most of my free time with two screens strapped to my face only really being removed for coffee and other……breaks.  Luckily the PSVR is very comfortable for long periods of use and the games I’ve been reviewing this time have been Zen’s Pinball VR base pack and it’s two recent additions –  the first expansion pack and the standard alone WALKING DEAD table.

This review is specific to that table and like its recent release counterparts is a must for any fan of Zen’s Pinball, in fact it’s a must for anyone who wants to play a really good virtual Pinball experience. Firstly, this is based on the Telltale Walking Dead game series not Fox’s ongoing zombie fest and I have to say this is a beautifully rendered table with faint light shimmers from reflective elements, intricate detailed character models and moving Pinball parts with the now familiar 3d table side animations. 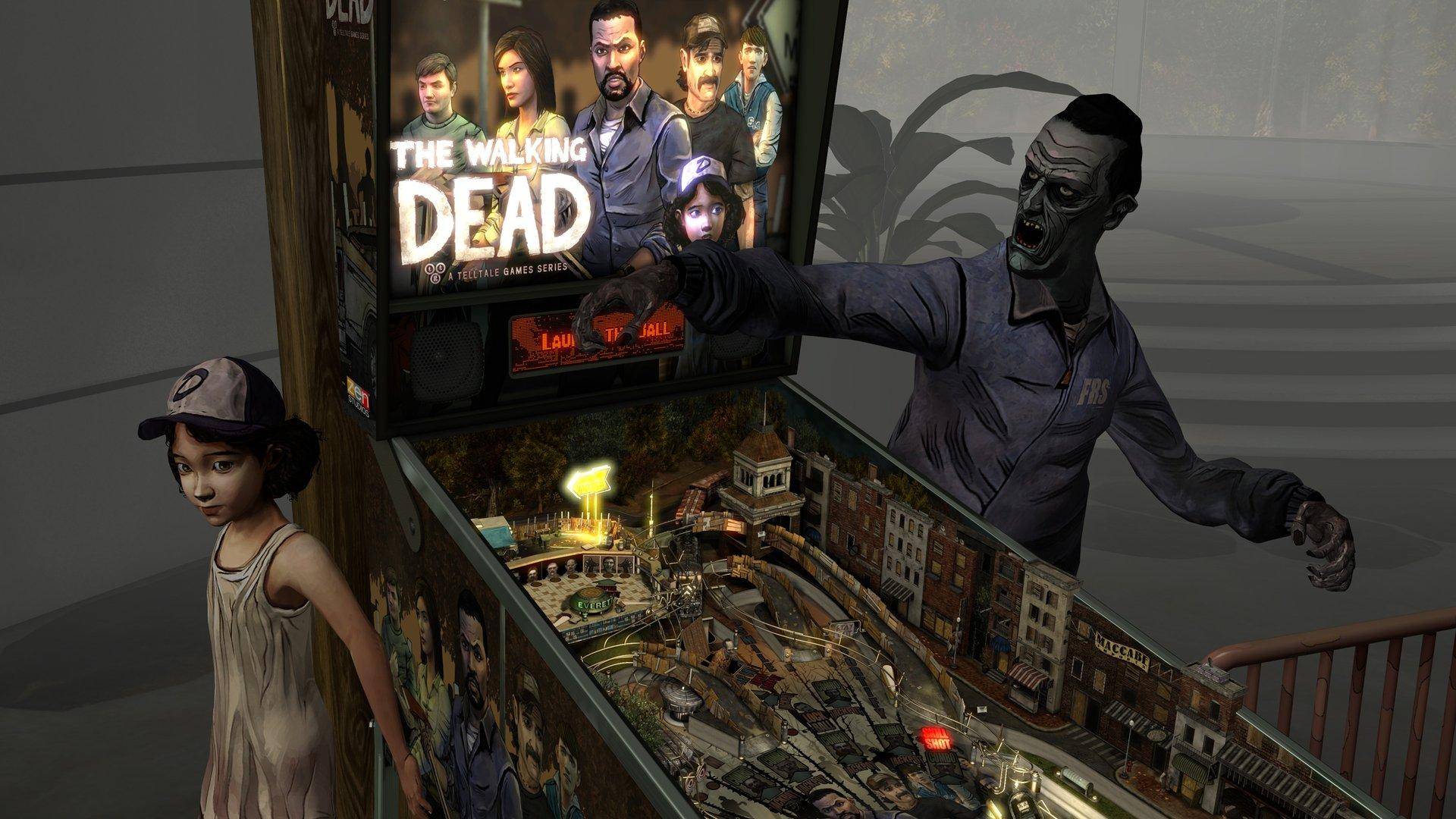 On your left cowering just behind the table is Clementine, the infant lead from the game series hiding from a walker who is standing to the right of the table constantly trying to reach her and on occasion you, which can really catch you off guard if you’re in the Pinball Zone. Sound effects and voice talents are directly from the original game which only adds to the overall genuine experience. Throughout you can either be the casual player by keep your ball alive for fun or take the more serious route and attempt to trigger the five mini games which relate to the five episodes from the original Telltale adventure by skilfully placing the ball in the various intermittently illuminated sections.

Once these have been successfully triggered you have a set time to achieve what is asked of you which could be to reach a set score or hit certain targets, also throughout these you are asked to make some limited choices using an old-fashioned pixelated display on the table, the flippers and launch button. These can range from choosing who to save between two characters (only really known to people who have played episodic series) to activating little scenes on the table to watch, they have even managed to add a little First Person shooting gallery where you have to shoot the dead and avoid the living with very limited ammo and lives. 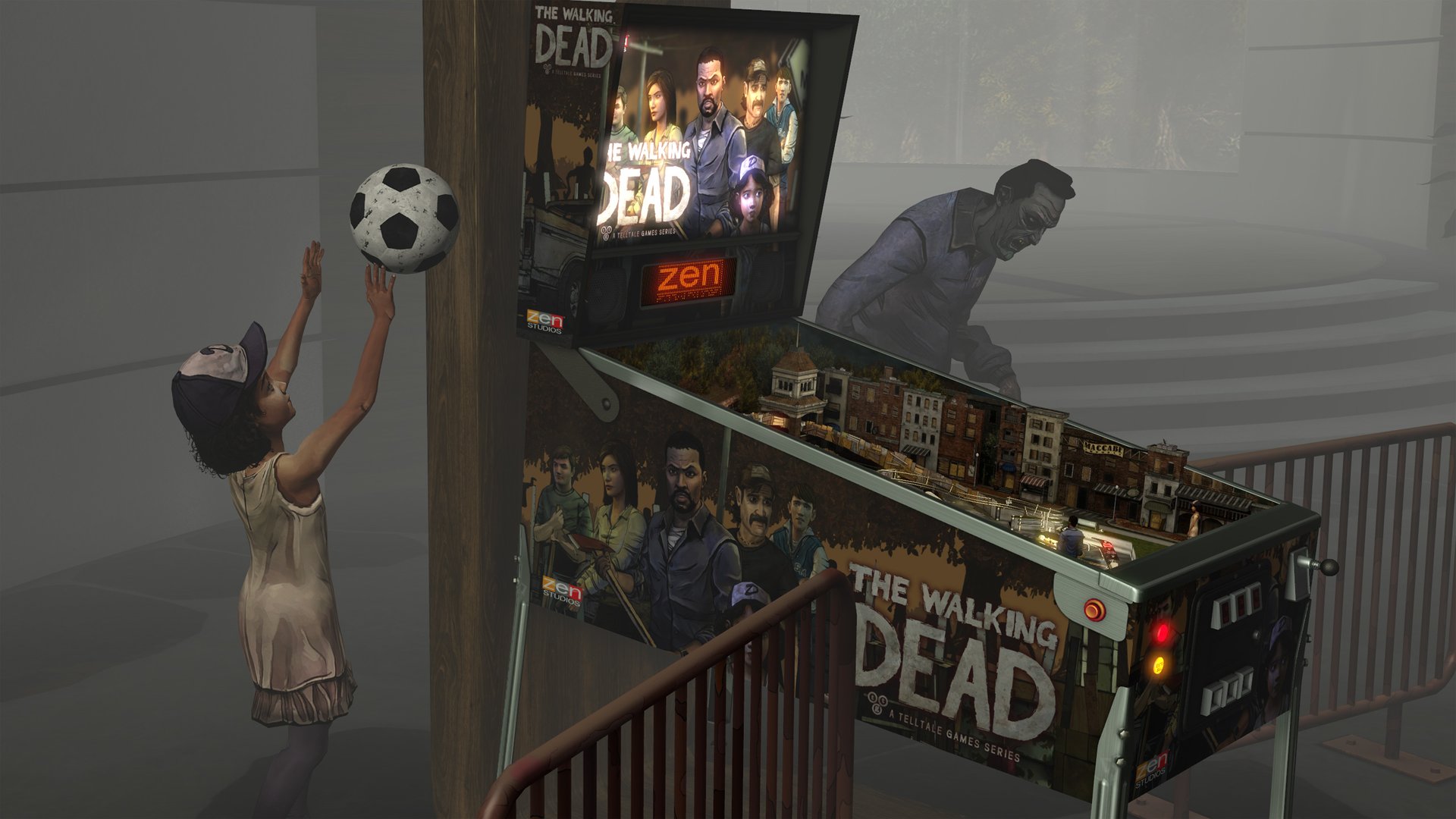 Overall Pinball FX2 VR: The Walking Dead table is one of the best Zen have made and they have included actual scenes from the Telltale game including the bell tower, the train and the overrun farm but obviously all these will mean nothing if you haven’t played the series. Little subtle touches also raise this above the normal Pinball table with the plunger being replaced by an axe, the centre drain is a door constantly being pounded by zombies and the one simple thing I really liked was a grate on the table with reaching hands which grab the ball if you get close enough throwing you off your game but only slightly.

There is nothing I can really fault with Pinball FX2 VR: The Walking Dead (maybe the price) and have constantly gone back to it during my testing of all the currently available tables due to the exceptional gameplay, scenarios and overall presentation and if you have already coughed up for the VR base package then this is a must purchase.