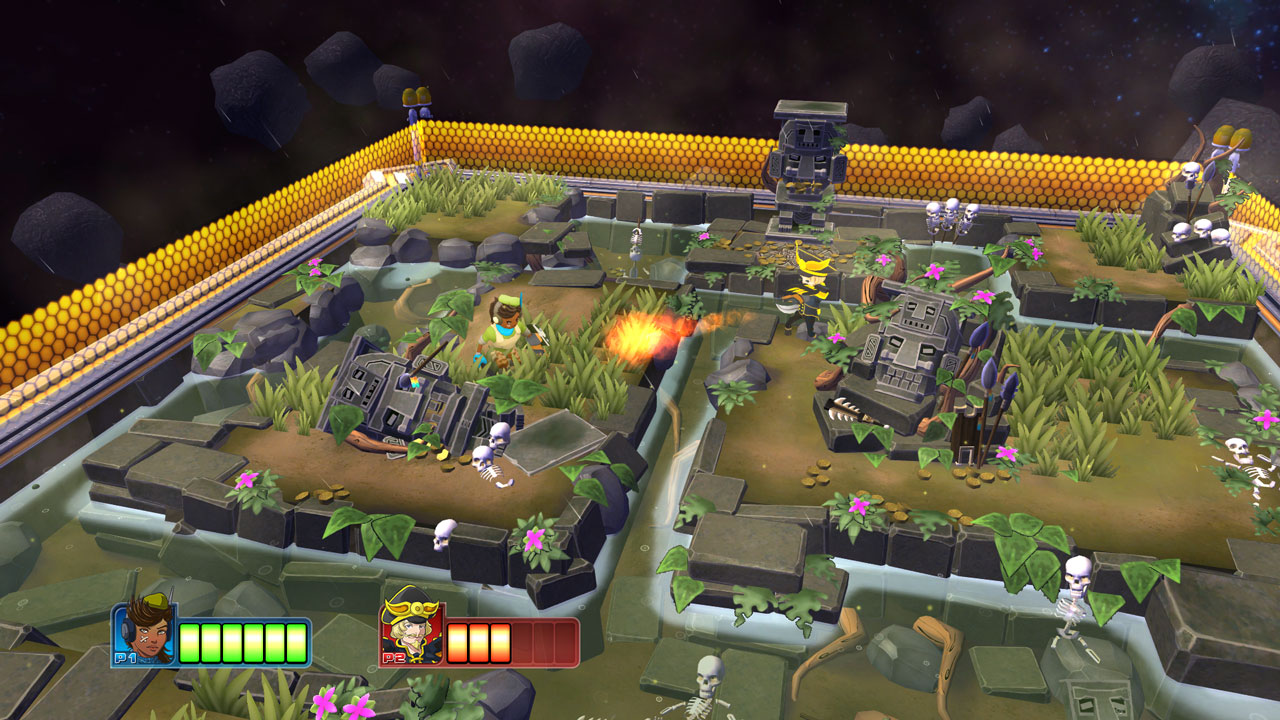 I remember being part of a team at university who built a 3D Archery game at university, we thought it was great but we may have been a little bias. Now imagine if Sony had walked in at some point and gave us the opportunity to spend more time on it and present it to them at a later date? Ruckus Rumble is the first game to be launched on the PS4 in association with the PlayStation First initiative. This initiative supports universities with hardware and technical advice. Ruckus Rumble was designed by a team of students from a game development school in Sweden. Ruckus Rumble was then presented to Sony who must have liked it because it’s now available to play!

Ruckus Rumble is a Bomberman style PvP brawler for 2 to 4 local players. All the players involved have the same actions/abilities so it’s a very balanced fight from the beginning. Ruckus Rumble features 4 dynamic abilities, spawning power ups and lots of trap/map hazards. You have a few minutes to beat each other up until the last player is standing. Ruckus Rumble is a very simple game with very basic controls which do make it a very easy game to get to grips with. Unfortunately there is no single player on offer so you have a reason to get a few friends involved. 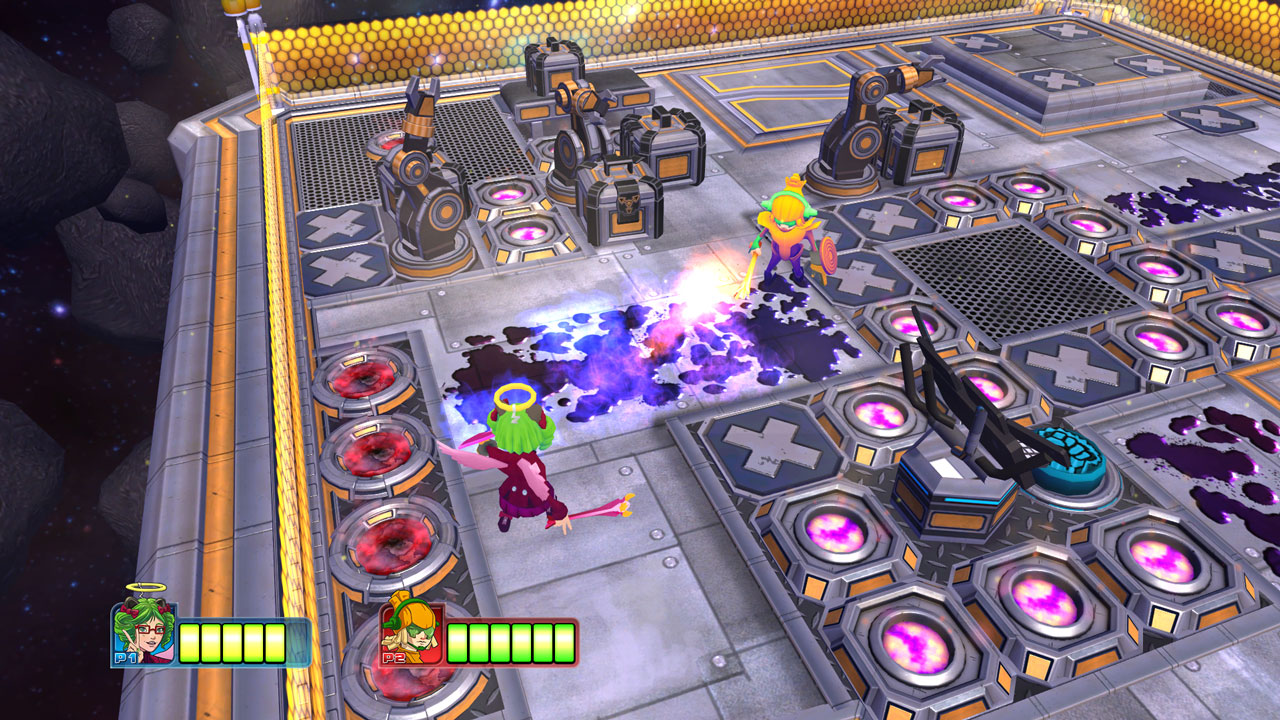 You can choose from characters who are uniquely named such as Samura-San (a Samurai), Dave (a Maya Enthusiast) and Cpt Caroline (a Starfleet Captain). Each one unfortunately lacks abit of character because their personas are not reflected on the battleground. Due to the fact that each character plays the same from a fighting point of view there is no difference between them. They all have the same easy to replicate moves which are just hook shots(a sort of ineffective way to position yourself around a player), a fireball, using your sword and the ability to stun another player by slamming the ground. After 20 minutes of playing Ruckus Rumble it becomes very repetitive really quickly, it may be designed to be a couch/party game but all you do is run around for a few minutes hitting each other or maneuvering another player near a trap. You can power up your sword and pick up power ups to help you but it’s not really worth it.

There’s no single player option which is a big miss for Ruckus Rumble. There’s also no practice arena, you just go straight in and pick your character and then a map to ‘rumble’ on. The characters have no backstory so it’s hard to relate to why they would be there, it would have been beneficial if you knew why they were in this predicament to begin with. Add the lack of depth of the characters to the relatively small maps on offer and you have a game that is fun to play for 5 minutes but thereafter you don’t really have any need to go back to it. Additionally there is no online functionality so there’s another way not to play Ruckus Rumble. 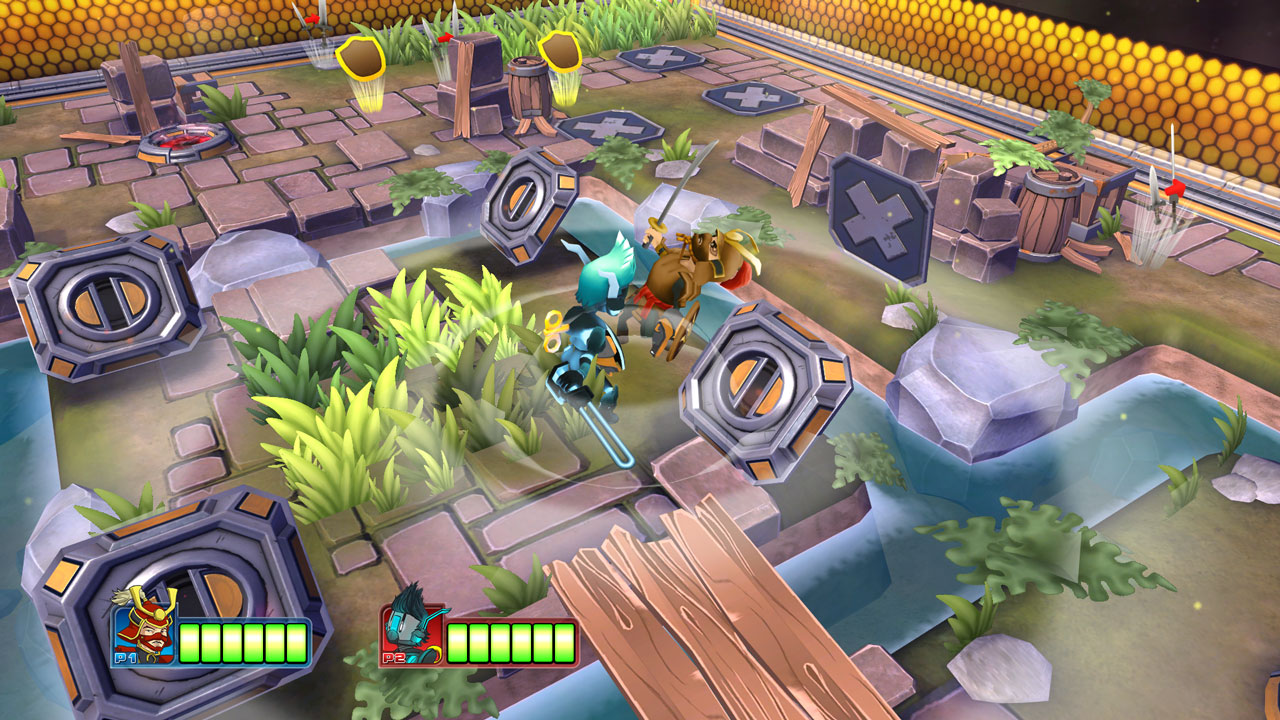 Graphically the colours are very bold and vibrant whilst the music fits in with what’s happening on screen. The maps lack originality as each one just feels like you’re playing the same map but with a different colour screen.

Ruckus Rumble is an impressive looking game considering it was made in 9 weeks but it’s also a game that lacks depth and gets repetitive very quickly. The lack of a single player is really disappointing because it would have at least doubled its longevity. Unfortunately for Ruckus Rumble each element just lacks either depth or finesse which is a shame because there at its core Ruckus Rumble could have been quite a fun title to play. It’s a reasonable start but definitely needs a lot more work to it.