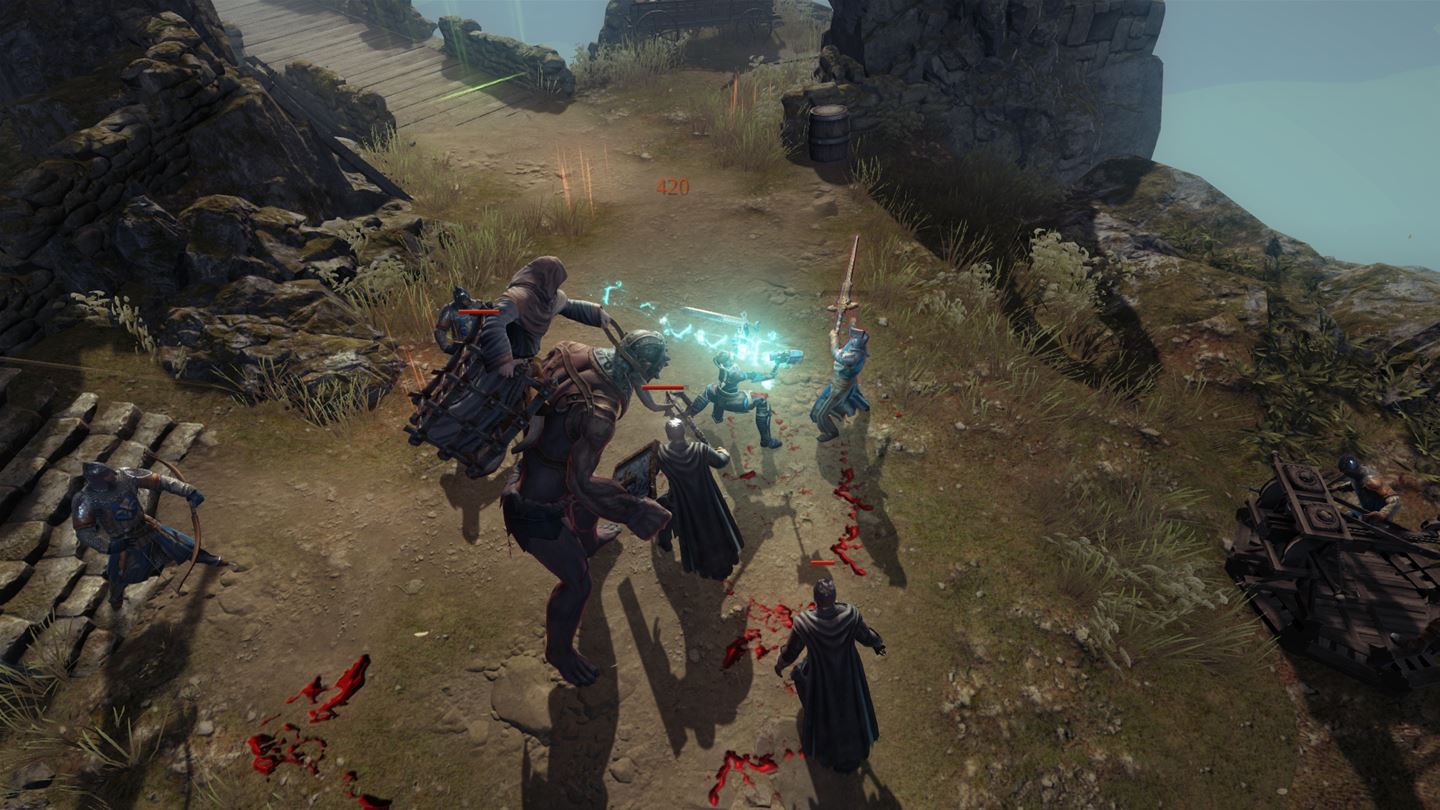 As a big fan of Diablo and both of the sequels, I’ve been excited about Vikings – Wolves of Midgard for quite a while. There’s no denying it, Vikings is a game that firmly demonstrates how imitation is the sincerest form of flattery, because whilst the subject matter here is based on Nordic lore rather than Diablo’s Angels and Demons, the core mechanics of both games are nigh upon identical, as are numerous other elements.

That’s not necessarily a bad thing though, because it’s been a few years since Diablo 3 launched on console, and it’s been almost five since it appeared on PC. So if, like me, you’ve already waded through the Blizzard classic and all of the extra incremental content, you might be gagging for more of the same dished up in a different way. Thankfully, Vikings looks and sounds great, with an angular top down presentation, loads of gritty detail in both levels and character models, and decent animation. The frame rate drops slightly in some scenes on Xbox One, but it is only occasionally bad enough to drop to the kind of crawl that can be life threatening in this kind of game.

The levels in Vikings are quite varied and the game features a number of maps based on various skins, each of which has a set of different missions, objectives and quests associated with it. For example, near the beginning of the game the player unlocks access to a Longship, and in turn this unlocks a new quest mission in a neighbouring village, and a side quest to hunt wolves on a different map. Whilst these maps are static (unlike the procedurally generated ones in Diablo) they are large, varied and more often than not, interesting. There are plenty of them too, so completing Vikings is no mean feat, even if it is a little repetitive in style which I’ll touch on later. 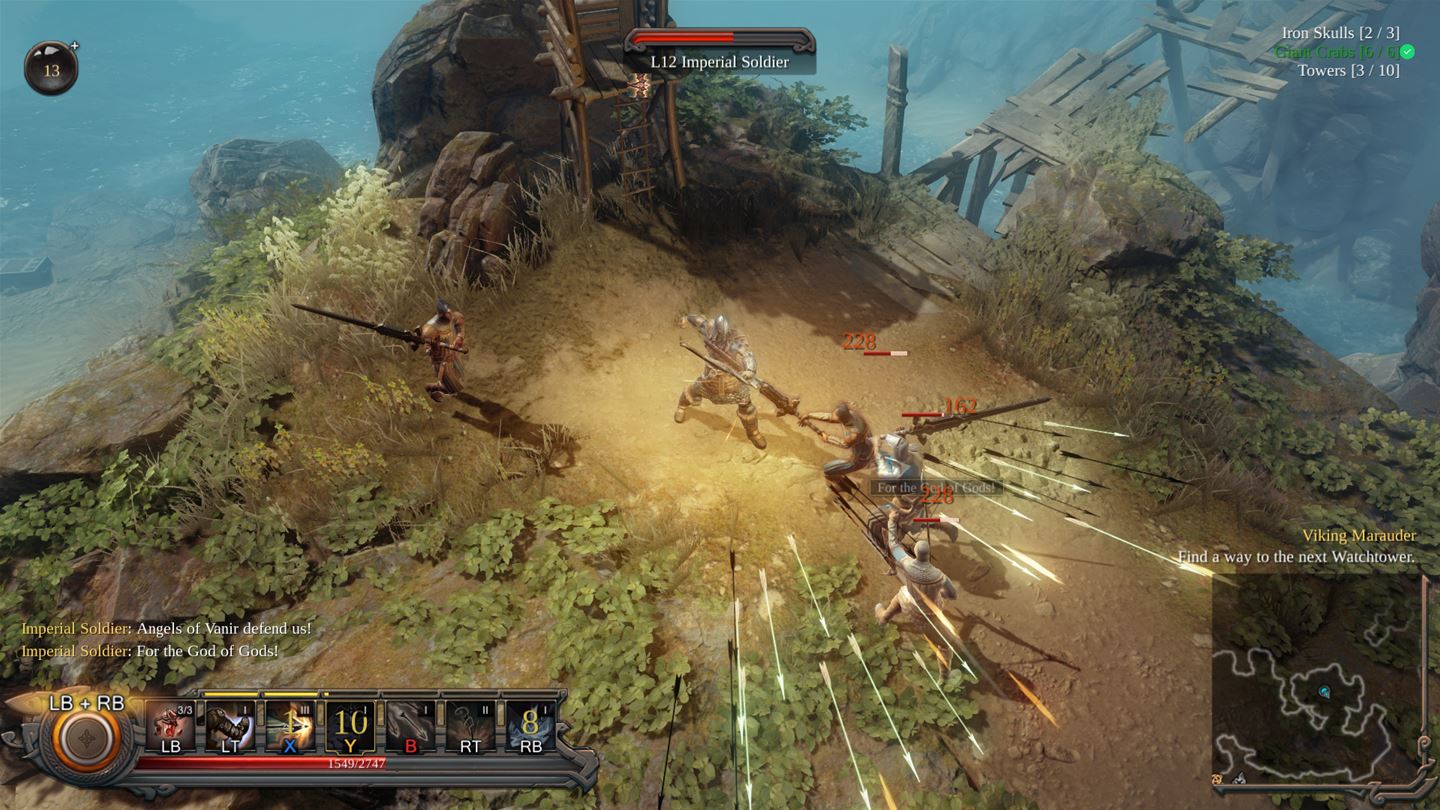 The game begins with the player choosing from either a male or female hero, and then customising them using various options for hair, face, tattoos and suchlike. We then choose from one of give gods who each represent a different primary weapon class and approach to playing the game. For example, Loki grants the player a bonus whilst dual wielding, whilst Thor favours those who use large, two-handed weapons such as mauls. Players are free to mix and match the skills granted by each god as they progress, but as is normal in games like this, it pays dividends to specialise in a particular area in order to develop the strongest possible hero.

From there, the player is rapidly named as the leader of his or her clan, and must set out to save the world from Ragnarok, the much maligned Viking vision of the end of days. This mission is largely fought against the traditional Norse enemies of Odin and the other gods, the Frost Giants. For the purpose of this game, the Frost Giants have gathered Fire Giants, Trolls, Jokul (fire elementals) and many other kinds of bad guy to their army, just to make it difficult for your hero I assume. There are also incidental threats from other, more traditional foes such as other Viking clans and even oppressive, mail-clad knights who seemingly hope to crush the Viking way of life.

Each level is themed around one of these groups of foes, and the player commonly journeys to their town, castle, village, cave or lair with the intention of killing as many of them as possible (usually including their leader) and then taking their stuff. There are often side quests on these levels such as destroying totems, hunting down Frost Giants and doing other similar activities, each of which gains the player extra blood. Blood is the currency of experience in Vikings, and gaining enough of it allows a given hero to plough more skill points into the path associated with their preferred god. There are also other currencies in the game that are used for crafting (essentially buying) items, and building up the starting settlement – for example by upgrading the Blood Altar that allows players to reach higher levels. 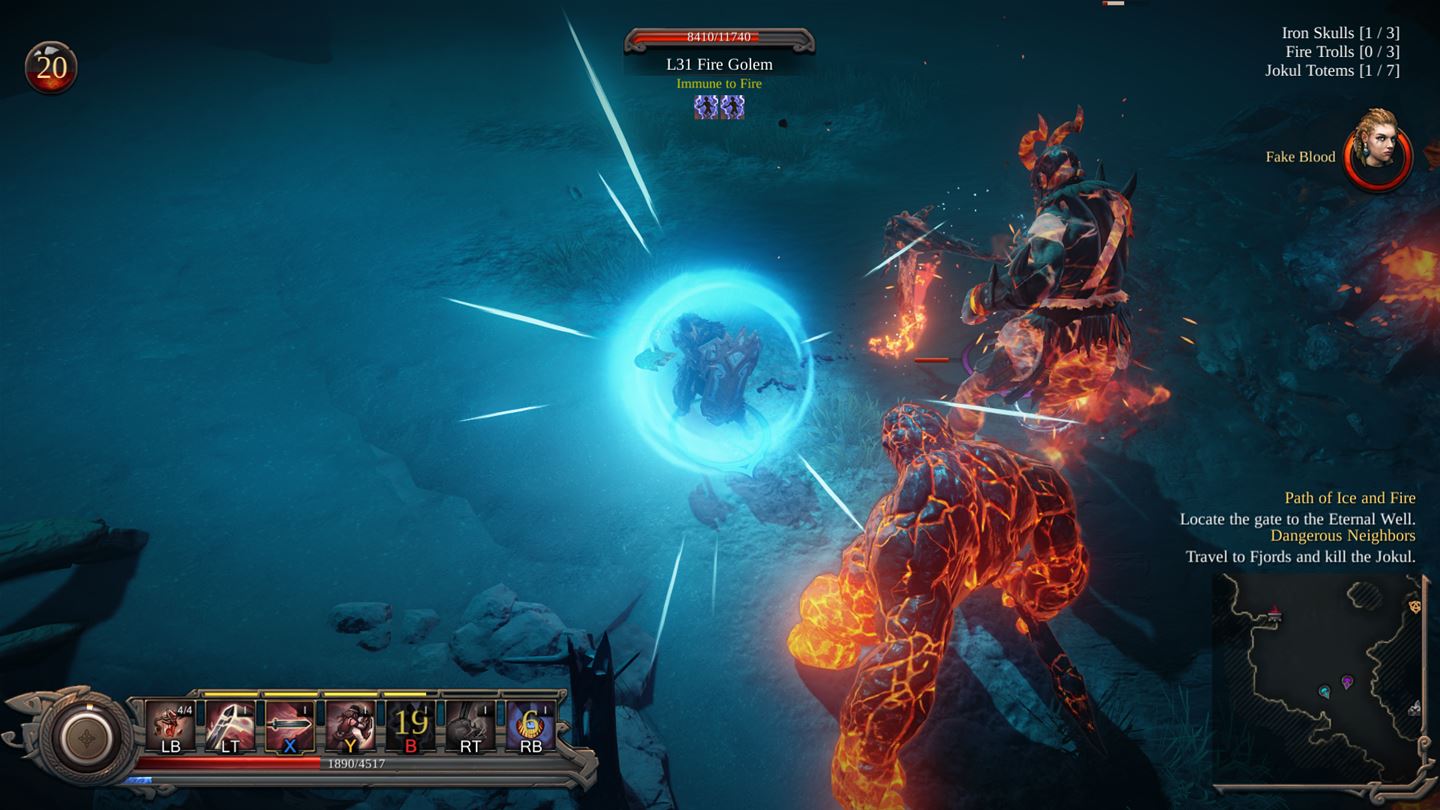 Whilst I’ve already explained how similar Vikings is to Diablo, it does bring at least one or two new ideas to the table, one of which I like in particular. The feature that makes Vikings most unique (and the one I like the most) is the inclusion of a level of danger associated with many of the environments. Whenever the player enters a hazardous area (including the entire first level for example) an environment meter begins to fill, and once it reaches maximum level, the player will begin to take damage. Depending on the kind of area that the hero is in, he or she must then seek out a safe haven in the form of a warm bonfire, a crack of fresh air or similar. It’s a mechanic that really drives behaviour, forcing players to take risks and press on, or to backtrack and play it safe.

Unsurprisingly for a game like this, there are a myriad of magical, rare and unique items to collect, with the quality of each drop being dependant upon player level and the toughness of the creature that the item drops from. Some of these items increase damage or attack speed, whilst others add more interesting effects like adding multipliers to blood gains, or a buff to elemental resistances. Whilst I didn’t find myself as excited by the item drops in Vikings as I have been in some other games, the magical items do flow thick and fast from the start, and when stacked with the skills dished out by the gods, our heroes can become quite powerful.

I think considering that Vikings is clearly a riff on other, more popular games, it would be easy to dismiss it as an average also ran. Fortunately though, it feels like an honest and fairly well polished effort to me, and it ticks many of the right boxes. There are some minor frame rate issues here and there and sure, there are only really two characters to choose from (male or female) but the god skills, loot drops, varied levels and interesting enemies are all good features. There is also a kind of arena mode that allows players to tackle waves of enemies in exchange for loot, and there is a solid multiplayer mode to boot. In summary, Vikings isn’t as good as game as Diablo 3 all round and if you haven’t played either, you should start with that. IF you have played Diablo 3 though and you want more of the same with a few nuances, then you could do a lot worse than Vikings.