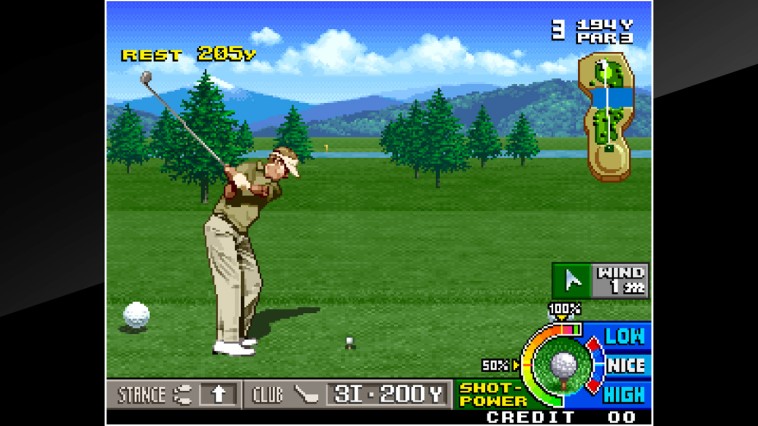 Ah, golf. The classic slow game, enjoyed by people around the globe for centuries. Surely the perfect sport to enjoy on the arcade machine of the NEO GEO, right?

Neo Turf Masters is an interesting take on the golf genre by SNK, who did their best to interject energy and excitement in a time before extreme sports and the ridiculous caricatures of sports (NFL Blitz, NBA Jam) were widely recognized. Instead, you get a sport that is, by all measures, a timely endeavor and inject it with reacting crowds, “fast” play and over-the-top character design, seasoned with a driving soundtrack that feels more at home in a racing game than, well, golf.

Having already recovered from my initial shock that the NEO GEO games don’t have multiplayer, expectations were a bit more tempered moving into Neo Turf Masters. Much like the other NEO GEO titles, you have the same wrapper that permits Japanese or English play, a high score attack and the Caravan mode to compete with players online. Interestingly, the Caravan mode hasn’t been altered at all, time-wise, for Neo Turf Masters, which means you still only have five minutes to do as much golfing as possible. This has the natural consequence that high scores are significantly lower than World Heroes Perfect, but, surprisingly, quite a few players nonetheless. 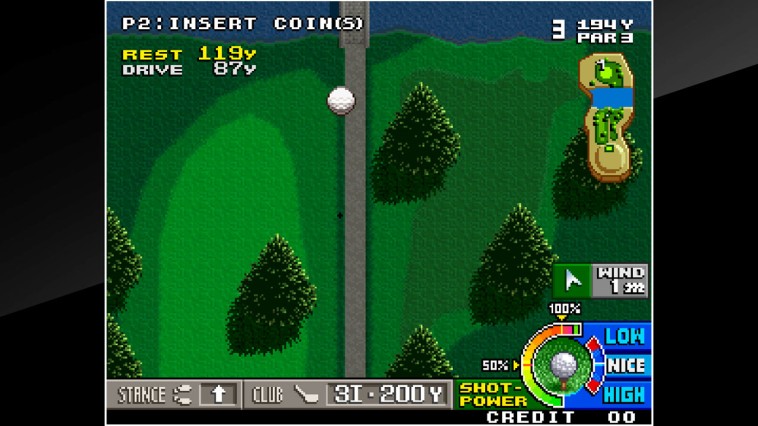 If you’re looking to experience the original Japanese version, you’ll find the differences with the US release are surprisingly sparse. The title of the game changes to Big Tournament Golf and some (not all) text is in Japanese and…well, that’s about it. Character names, the announcer voices and the music don’t change a bit, and you could, in most instances, play either version without knowing in which you were taking part. Though it’s interesting from a marketing perspective and for a historical appreciation point, it’s head-scratching why the two versions are even offered. The conclusion is only that it’s assumed some fans would be livid if Neo Turf Masters didn’t get the same duality support that other NEO GEO titles were afforded.

The appreciation of Neo Turf Masters is also a confusing situation. It’s certainly not comical or ludicrous enough to merit being a parody game, but it also is not invested in any reality, as not a single golfer is a clear homage to an actual athlete, nor is any course. It’s got almost an 80’s vibe to it with the style, and the feel carries through both wins and losses. Every character has their own strengths and weaknesses, but, as long as you get the timing of the game down, you won’t notice any significant handicaps between golfers.

Speaking of gameplay, it’s almost 8-bit in its simplicity, especially compared to golf games of today. Though the turf does play some factor in drag and you won’t get out of a sand trap with a putter, weather simply doesn’t exist in Neo Turf Masters. It’s a beautiful day for a tournament regardless, and a single button is all you need to line up your stroke power and slice degree. Cycling between clubs comes with no hesitation, no input from a caddy…do you feel like putting with a 1Wood? Go right ahead, it’s your tournament! 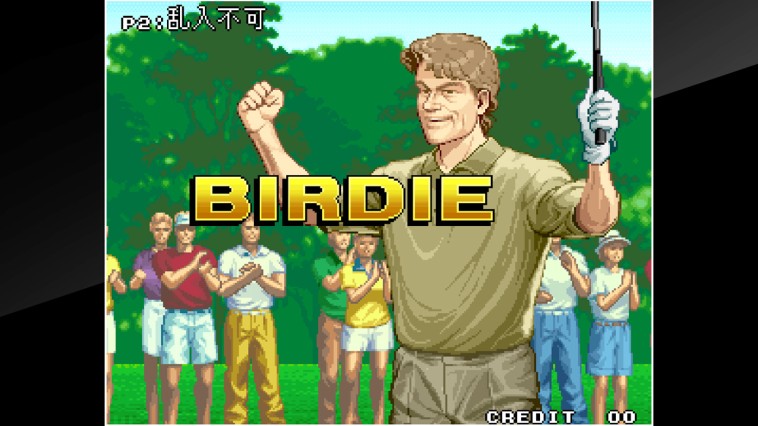 The ease of control is balanced by some of the course designs, thankfully. Peppered with water hazards, narrow fairways and plenty of sand traps, there is at least a bit of consideration that needs to go into your play. You can’t just hack away with the recommended club from start to finish if you want to ensure that you place in the top four. If you continue to bogey hole after hole, you’ll get a game over and not even finish the full eighteen holes. You can continue your progress as many times as you want, but it feels cheap to keep dragging in last place for the duration.

A last note about the CPU difficulty. No matter what you scale it to, the game ultimately comes down to how well you play. Even if you spike the difficulty to max, you won’t be against a horde of miracle hole-in-one aficionados. You’ll still end up coming out on top, as the best the AI can do is two under par on any given hole. Therefore, for the real golf-hog, you may get pretty cocky being able to school the computer at their best game. Just remember: this is a game from 1996, and you will get smashed in any modern golfer.

Neo Turf Masters is a great piece of video game oddity history. A golf game, designed by the Metal Slug team, which is still enjoyable despite being neither a satisfactory “realistic” golf game nor a true “extreme” sport. No power-ups, no insane weather, no customizable characters, but, somehow, still a refreshing and fun play for even the least golf-minded players. If you’re truly curious, I would recommend giving it a spin on a long train ride, a rainy afternoon or any time you feel your inner Happy Gilmore trying to break free.