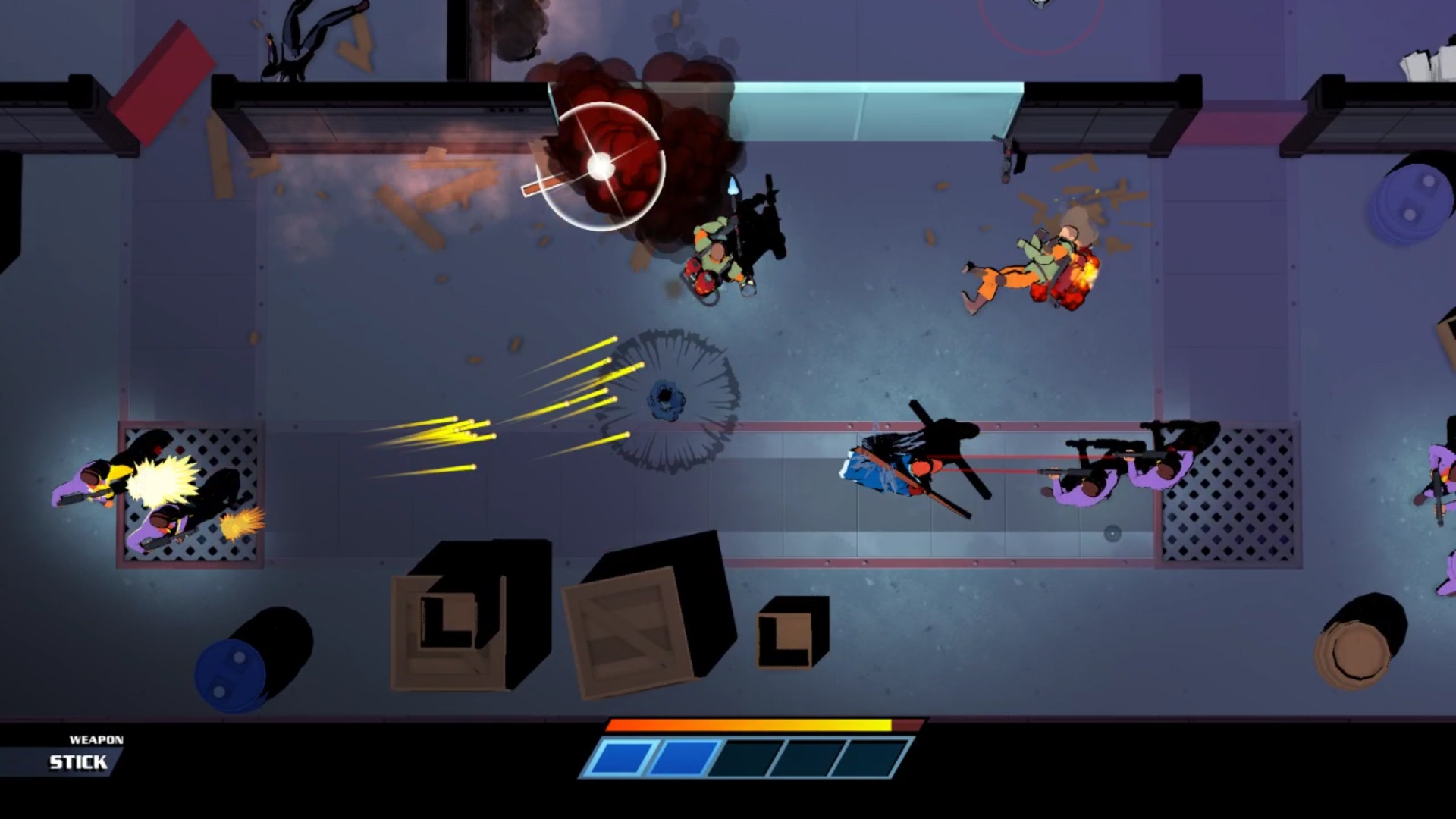 Mr. Shifty addresses the question that everyone has been wondering: what would it be like to be Nightcrawler from X-Men? Though this is a comparison that I’m sure many have already have made, it’s hard not to see the parallel from the get-go. You play as Mr. Shifty, a spy of sorts who works for an unnamed group that seeks to use you to achieve certain goals and targets that might be difficult for the average saboteur. You have the ability to teleport across small distances a finite number of times, though your “shift bar” recharges rather quickly. Along the way, you will encounter a number of hostile enemies and traps that will result in your instant death if hit even once

It’s not all jumping around and being terrified, however. Mr. Shifty (or just Shifty to his friends) is relatively adept at hand-to-hand combat, and can combo a pretty good set of punches when he gets going. Additionally, a number of objects that you find around the levels are usable as weapons, and these can be invaluable. Besides being great for melee incidents, these items you find are your only recourse for ranged attacking, which can save your skin on a number of occasions.

Mr. Shifty’s controls are pretty easy to pick up from the very beginning. Your fellow spy/eye in the sky hacker/narrator does a good job of walking you through the basics of teleporting, simple combat and the value of coming in the side instead of always busting through the front door. There’s a distinct difference between charging ahead and being more subtle, and there’s satisfaction and value in either approach, though different levels will only allow for one to be the answer. Mr. Shifty is also only single stick for both walking and targeting, which makes it a bit easier to control than a commonly compared title, Hotline Miami. The R stick is actually used to peer around the immediate area, which can assist in planning out where you head next. 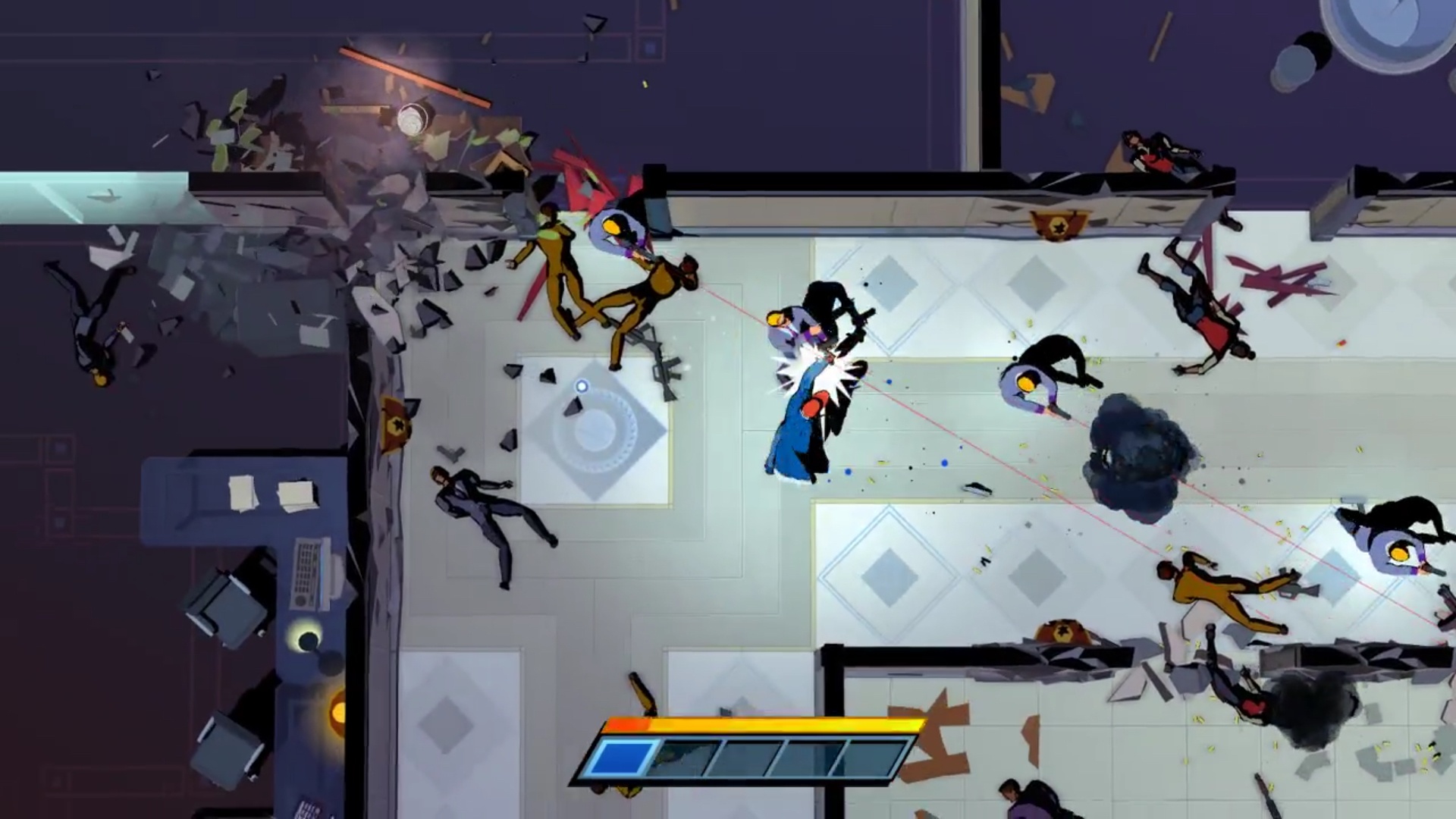 Speaking of the combat, that is an aspect of Mr. Shifty that I deeply enjoyed. Getting into a groove of poofing around, punching and dodging bullets/lasers/big muscle is something that Shifty nails in the most wonderful way. There’s a lot of fluidity that goes into the game, and being quick on your fingers with planning what to do next gives you a sense of control and action that really puts you into Shifty’s shoes. When you mess up and get shot, you are immediately mad at yourself, not the game, for failing to be a bit faster in your execution. When you clear a level without dying once, you feel pretty smug in your spy abilities.

The nature of the game also allows multiple ways to solve problems with each level. Do you want to kick in the door, smashing some goon in the face, and just move around like a vengeful cloud of ethereal justice? Go ahead, that might work out! Or you can silently jump into every room through the walls, doing your best to dispatch the baddies before a single shot is fired, like a smoky assassin. The second process is significantly more difficult to pull off, however. You developers did a good job of making the walls and most of the furniture destructible, and the NPC thugs aren’t totally deaf to the noises around them. Some may argue this makes the game more challenging, but I sometimes find a bit of annoyance when I think I’m set to bamf in like the night wind, only to burst through the wall like the Kool-Aid Man. Not the best use of super powers.

Level design is varied and logical throughout. Mr. Shifty often has our protagonist having to go through several stages, only to then need to backtrack in order to each the elevator where he left off. This makes sure to get the most out of every floor while also keeping the player on their toes, as new enemies or traps may have spawned from when you last came through. The furniture and walls will have rebuilt themselves so that you can freshly make decisions about how to traipse home, and you may even find that a stage affords no new surprises, which, in and of itself, is a surprise. There are times where I felt it would have made more sense to have another elevator at the end, but I get there’s a certain level of storytelling that requires you to go the same thing over and over, offering a bit of realism to a game about a man who can puff through solid objects.

The level design can, at times, be the downfall of the game. As I said before, Shifty thrives on combat and comboing with moving and punching. The stages where there is no one to fight and you just need to survive, however, is the thorn that makes the rose so dangerous. Massive sweeping lasers and surprise explosions can dominate the field, and you’re forced to work out a pattern in order to get to your next objective. When you are able to go through room after room full of maniacs with guns and escape unscathed, but then spend fifteen minutes and multiple deaths trying to dance through the lasers a la Entrapment, it really throws a wrench in the gears. I didn’t feel satisfied to finally figure out where and when to teleport, I just felt relief that I could move on to another area where I could hopefully punch my way through. 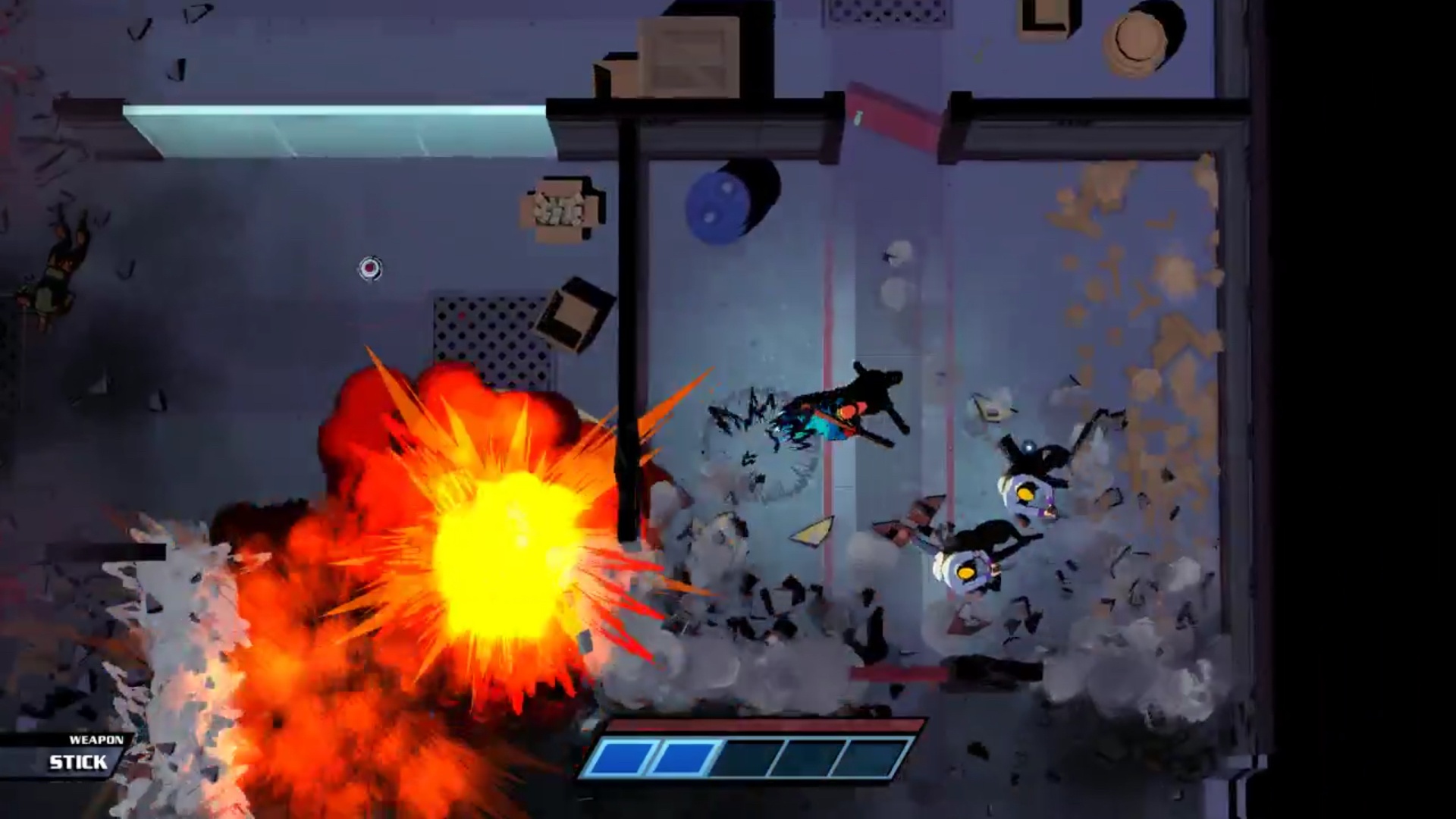 Also, the poofing mechanic can sometimes be a bit too generous. When you enter a stage with just a handful of henchmen and you have all the open space you’d like, it’s almost insulting how easy it can be to pick them off one by one. At times, the welcome relief of a simple group is nice, but I want to keep the intensity up and keep moving and hitting as fast as I can. I can’t do that with just three dudes!

Lastly, I feel that the framing devices for the game – the between level dialogue, the soundtrack, the general motif – is a bit forgettable. The script is a bit flat with peppered with profanity to try and spice it up, but I get that it makes sense in the thematic of the game. I personally preferred to keep the game on mute and provide my own soundtrack, as the sound effects didn’t offer any clues or indication as to what was happening in the game and the music was just ok. There isn’t and good or bad takeaway from these points, it’s just a push, and I don’t feel it affects the overall score of the game one way or another.

The indie titles are coming fast and furious for the Switch, and I’m incredibly grateful that Mr. Shifty has made it’s launch simultaneous on both Steam and Nintendo. This is a great pick-up game, and works wonderfully in long stretches of gaming. The incentive for replay is there, especially if you’re looking to get a “perfect” rating on each level (no deaths, good luck!). It handles like a dream and scratches my itch of a top-down beating-fest that isn’t done with animal masks and unforgiving brutality. Highly recommended and there’s no to ways about it: Mr. Shifty isn’t going to vanish from my library anytime soon.