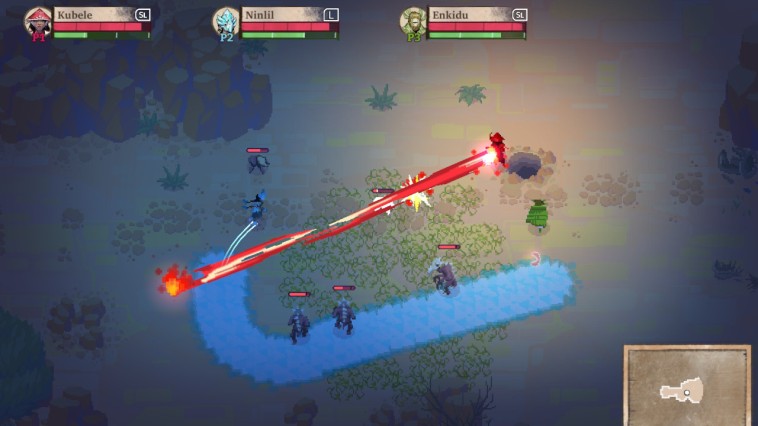 I’ve actually been meaning to play Moon Hunters for quite some time now. I got my first glimpse of it at a gaming convention about a year or so ago, and I loved the way it was presented. It seemed fun, a little frantic in combat, and really had a unique take on how to mix in RPG elements with action sequences. I was drawn by the art style and held by how the whole thing came together with great co-op action. So when I saw that a definitive edition with extra companions would be coming to the Switch, I got pretty excited. Sadly, that excitement only makes the pitfalls of the game more pronounced.

Firstly, the concept of Moon Hunters is pretty interesting. As members of an ancient culture who worship the moon, you feel fear and panic the first night the moon doesn’t rise for your annual ceremony. This fear is only further pronounced by the appearance of monsters shortly thereafter, and the realization this may be the doing of the sun cult. With only five days of your festival to put things right, you and your fellow companions spring into action to find answers and return the moon to its rightful place in the sky before total anarchy reigns. The game itself is designed to have the playthroughs (of which multiple are encouraged) unlock and create new elements to the overall mythology. Basically, this is a game where the story seems to get more involved each time you play.

The graphics are, as I originally said, a wonderful presentation of artistic pixels. Reminding me very much of Titan Souls, each monster, NPC and character are sculpted in a way that really fits the atmosphere of the game. Once you leave your village and head to the overworld map, you suddenly feel the scope of your mission, and what needs to be done in terms of investigation, and the decision to use pixel art conveys that in a very impressive (and almost daunting) manner. 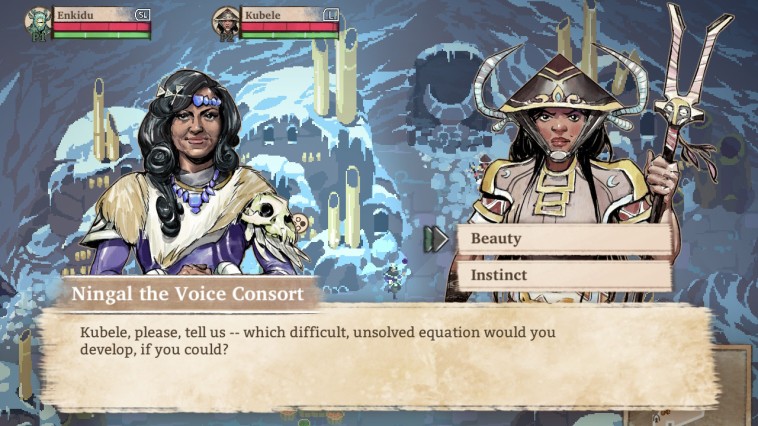 The art also lends itself well to the key mechanics of Moon Hunters. As an action RPG, Moon Hunters does a spectacular job of mixing in some great RPG elements to make the game more engaging than a simple run of Gauntlet. Talking to people and making decisions regarding your quest add and detract points to your overall stats, such as compassionate decisions to raise your charm, and sacrificial ones to boost your faith. Being able to elevate stats to a certain level only further strengthens your character, so there’s really no loss to making good choices. Besides that, there’s also cooking options for stat changing food, stargazing to appreciate and divine future choices, and a host of other minor decisions to make the game more involved.

As for the action portion, Moon Hunters is procedurally generated, so you’re never quite certain which and how many enemies you may encounter in your journey. You have several classes to choose from, with all being magical in nature but not all relying on ranged attacks. Having said that, you’re probably going to want to lean on more ranged attackers, because the procedural generation can mean you end up with swarms of enemies when you least expect it. This does bring me to my first minor gripe: the daunting task. Moon Hunters is, naturally, a lot more fun with a group, but it also feels nearly impossible to enjoy when you’re playing solo. Being able to find that sweet combination of Ritualist and Snowdancer isn’t something you’ll discover on your own, and the animal familiars, though beneficial and quirky (love the snow monkey!) are simply not a replacement for a friend or two who you can share the experience with. This is more of a personal thing, but ever since Lovers in a Dangerous Timespace, I realize that developers plan a game that only really works with two or more players, but still want single players to feel included as well. The problem is, it’s like learning ballroom dance with a mannequin instead of a partner: technically you’re dancing, but you’re really just going through the motions alone. 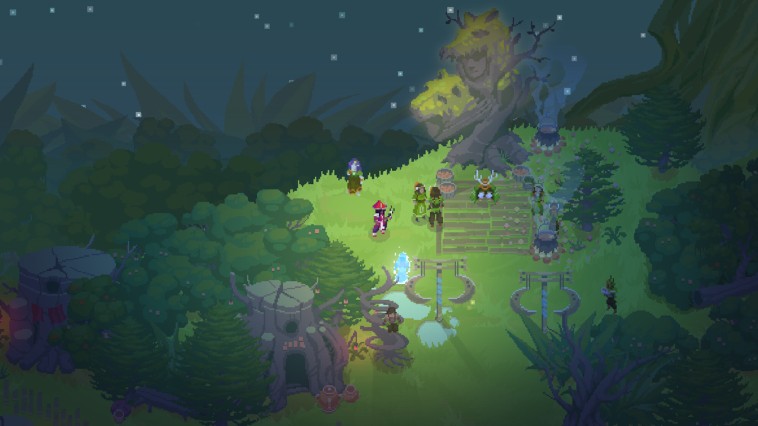 Procedurally generated levels. Cool RPG stats. A wide variety of classes. And playthroughs that only take an hour and add a lot more to the game each time. Why am I glum, then? Two simple words: Load Times. I normally don’t think much about this, because every game is different in terms of loading. I noticed Oxenfree had a bit of a lag when I first started it up, but it didn’t seem like a big enough deal to mention. But Moon Hunters has a different shape entirely to its load. The game just sits and loads for quite a while at the very beginning, and God help you if you’re loading up a save game. I literally thought that my Switch had died or something. Timing it, it took almost two full minutes to load up one save file, enough that I thought about walking away. The problem here, though, is that Moon Hunters will drop you straight into the level where you were last, and the procedurally generated boars don’t care that I was checking my email while waiting for the game to load. This is something that I think will be a MASSIVE turnoff for the Switch crowd, who’s gotten accustomed to waiting a small bit but ultimately not that much. Mario Odyssey famously has that long pause at the beginning while it advises you on control setup, but that’s the last time it really makes you wait. Moon Hunters seems to have some serious issue, and I’m not sure what to do with it.

If you have friends who grew up enjoying couch co-op action and want to have a stellar, serving sized adventure, Moon Hunters is a fantastic choice. I really believe this game just gets bigger the more you play, and that’s an exciting direction for adventure games to take. On the other hand, if you’re planning to take this on solo, I highly advise you find your old D&D group and call them in to get at least one other person in it with you. And if you’re impatient, like I am, then you’ll want to wait for the optimization patch to cut down load times. Otherwise you’ll be waiting till long after the moon has risen.